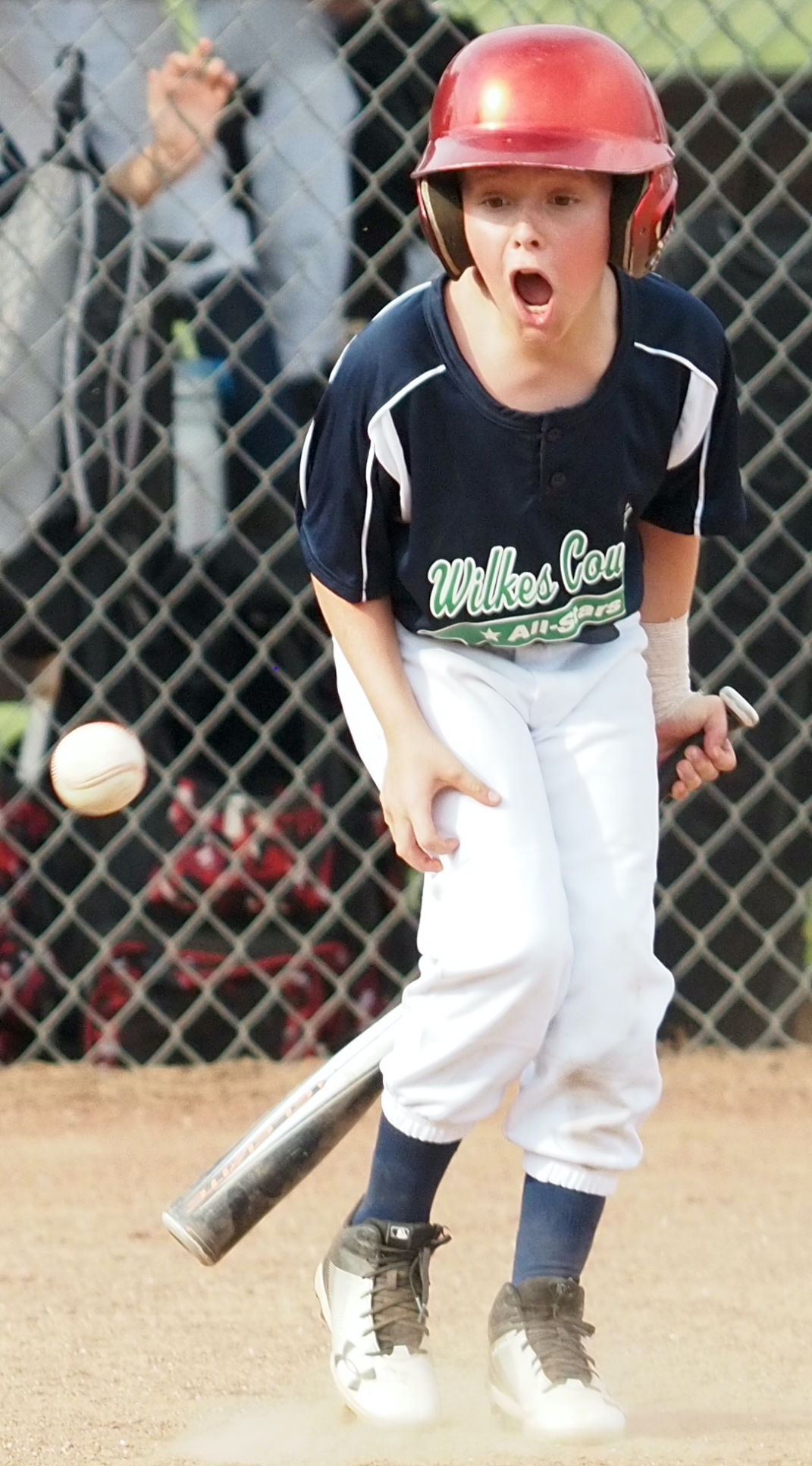 Wilkes 8U all-star Wesley Parnell implores teammate Ethan Neuens (out of frame) to slide into home plate as the ball approaches the Watauga catcher on July 7 in Wilkesboro. 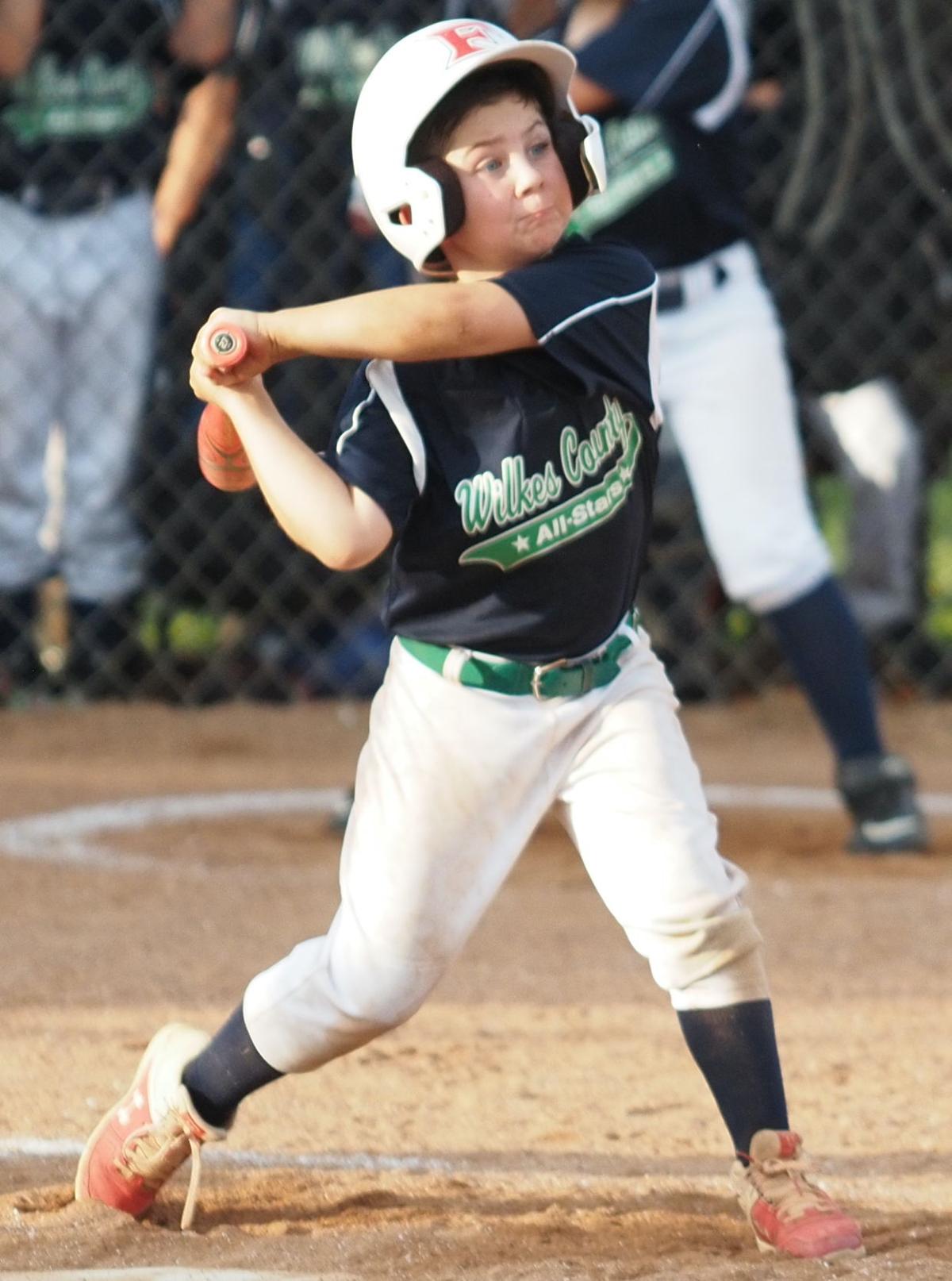 Wilkes 8U all-star first baseman Cohen Snider cracks a single Friday against Yancey County. Snider went 3-for-3 at the plate and scored three times in the final game against the Cougars. 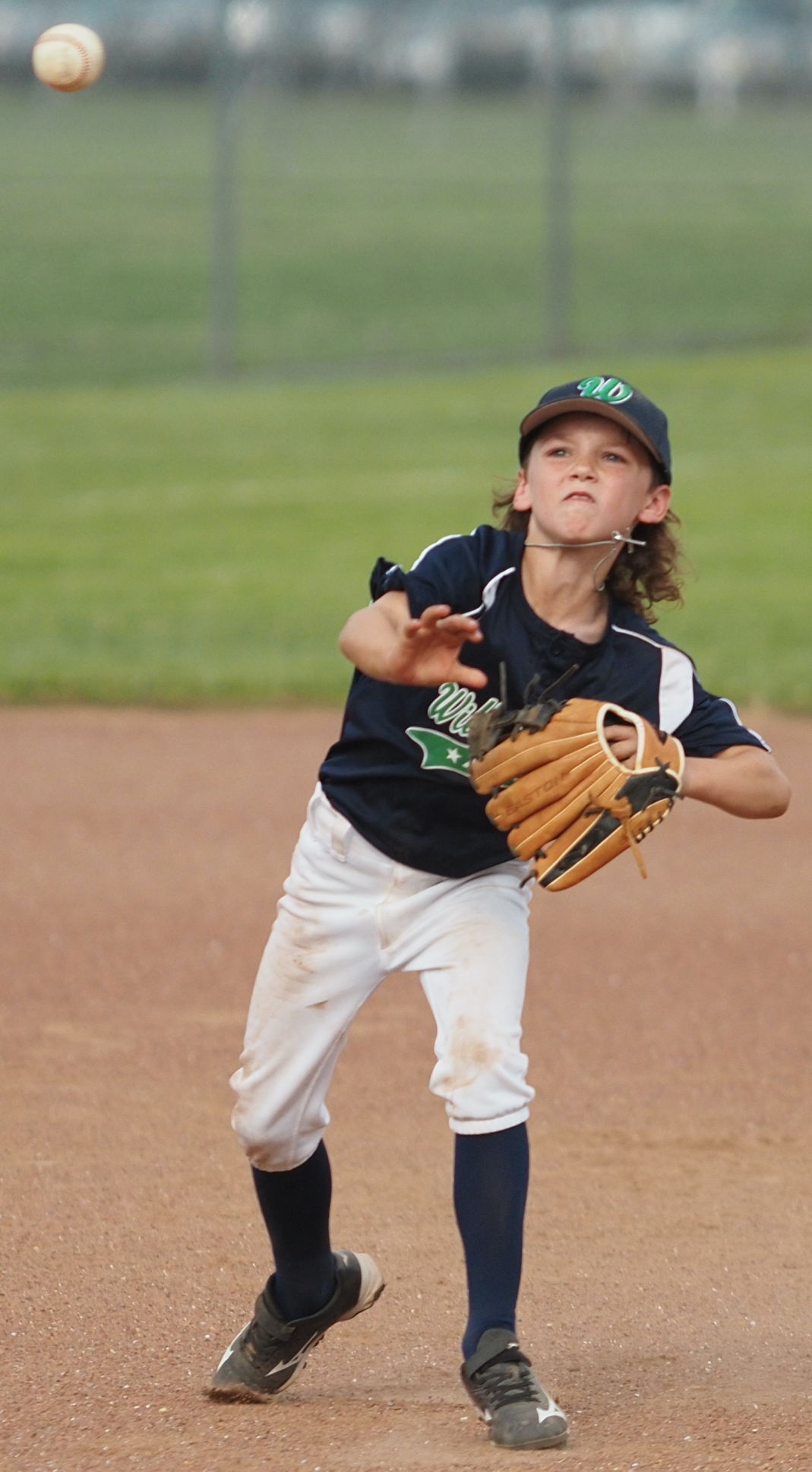 Wilkes 8U shortstop Caiden Andrews throws to first to retire a Watauga batter on July 7 in Wilkesboro. At the plate, Andrews had two home runs in his club’s 15-1 win.

Wilkes 8U all-star Wesley Parnell implores teammate Ethan Neuens (out of frame) to slide into home plate as the ball approaches the Watauga catcher on July 7 in Wilkesboro.

Wilkes 8U all-star first baseman Cohen Snider cracks a single Friday against Yancey County. Snider went 3-for-3 at the plate and scored three times in the final game against the Cougars.

Wilkes 8U shortstop Caiden Andrews throws to first to retire a Watauga batter on July 7 in Wilkesboro. At the plate, Andrews had two home runs in his club’s 15-1 win.

Yancey County’s 8U baseball all-stars did it the hard way Friday, emerging from the consolation bracket and knocking off host Wilkes County in back-to-back games.

The Cougars defeated Wilkes in the deciding game, 12-10, of the Tar Heel Leagues District 2 coach pitch finals at Lowe’s Field at River’s Edge in Wilkesboro.

In the final game, Cohen Snider and Trevor Church both went 3-for-3 at the plate to lead the Wilkes effort. Snider scored a team-high three runs.

Brantlee Brown led Wilkes with four RBIs. Church and Connor Huffman each had doubles for Wilkes.

Ethan Neuens went 2-for-3 and drove in a pair of runs for Wilkes. Also with two hits were River Wilcox, Huffman and Brown.

Yancey forced the deciding game by taking a 16-5 win over Wilkes earlier on Friday.

Kenan Huffman, Elijah Mills and Brown each went 2-for-2 at the plate to pace Wilkes’ 10-hit attack.

Driving in runs for Wilkes were Connor Huffman, Caiden Andrews, Mills and Brown.

Down 3-0, Wilkes scored all of its runs in the bottom of the first inning. Wilcox got things started with an infield single down the third-base line, and he beat the throw to second as Kenan Huffman tapped an infield single to short.

Connor Huffman then singled to left, and Andrews’ single to right plated Wilcox. Snider’s infield to short moved Huffman up to second. A fielder’s choice to short by Mills drove in Connor Huffman.

Church’s fielder’s choice to first plated Snider and set up runners at the corners with two outs. Then Neuens’ infield single right to the pitcher scored Connor Huffman and gave Wilkes a 4-3 lead.

Brown’s bloop single to right scored Church for the fifth run and automatically ended the inning. Teams are limited to five runs per frame in coach pitch (8-and-under) play.

The Cougars took control with five runs in the second, three in the third, four in the fourth and four in the fifth innings.

Wilkes moved into the tournament finals with a 15-1 shellacking of Watauga on July 7.

“My biggest takeaway was our very dominating defense,” said Matt Snider, the Wilkes head coach. “Take away a couple of errors in two innings and they have played shut-down baseball, 10 innings of scoreless baseball.

“In coach pitch that’s rare, but they’re 8-year-old kids and they’re going to make mistakes. They made mistakes but they came right back and got those runs back and played great defense the rest of the game.”

After turning a double play to extinguish the Watauga threat in the first, the hosts struck fast for five runs—the one-inning maximum allowed in coach pitch competition—in the bottom of the frame.

River Wilcox led off with a single to right center and scored following Kenan Huffman’s single down the first-base line. Connor Huffman then singled to center and advanced to third as Huffman scored on the play.

Trevor Church then reached on an infield single to the shortstop, scoring Connor Huffman. Caiden Andrews next delivered an inside-the-park homer to right center, also scoring Cohen Snider, making it 5-0.

Five more Wilkes runners crossed home in the second, as Ethan Neuens led off with a grounder right under the shortstop’s glove. Brantlee Brown then reached on an infield throwing error with two outs, plating Neuens.

Wilcox then hit an inside-the-park homer to right center for an 8-0 Wilkes lead.

Wilkes put it away with five more runs in the third. Elijah Mills led off with an infield single to short and scored on Snider’s bloop single down the right-field line. Andrews then homered again, this time to left field, making it 13-1.

Neuens’ single up the middle turned into an inside-the-park homer after a series of throws. Wesley Parnell reached on a single to short and scored the final run on Brown’s infield single.

Watauga defeated Ashe County on July 5, 12-2, to advance to the July 7 game against Wilkes.

Wilkes advanced to the district semifinals with an 8-5 over Yancey County on July 5.

The host never trailed after River Wilcox and Connor Huffman reached base and eventually scored in the first inning.

After Caiden Andrews and Kenan Huffman crossed home in the second and third innings, respectively, the Wilkes lead was extended with three runs in the third. Andrews, Wesley Parnell and Aaron Hamby scored for the hosts in that frame.

Kenan Huffman scored the final Wilkes run in the fifth.

The hosts jumped on the visitors with five runs in the top of the fifth. River Wilcox, Kenan Huffman, Connor Huffman, Trevor Church and Elijah Mills reached on consecutive infield singles, and all five eventually scored.

Wilkes put four more runs on the board in the third. Kenan Huffman started things with a flyball single, then Connor Huffman, Church and Mills reached on groundball singles. All four crossed the plate in the frame.

After Hickory struck for five runs in the third, Ethan Neuens scored for Wilkes in the fourth. The hosts put it away with five more runs in the fifth, as Wilcox, Kenan Huffman, Connor Huffman, Church and Cohen Snider touched home.

The Wilkes County 10U baseball all-star team opened District 2 play Monday with an 11-1 victory over Mitchell County in Boone. Wilkes will face Yancey County on Wednesday at 5:30 p.m.

The Wilkes County 12U baseball all-star team kicked off District 2 play Monday with a win over Yancey County in Jefferson. Wilkes was set to face Watauga on Tuesday, with the winner advancing to the finals on Wednesday (and Thursday if necessary).

The Wilkes County 15U baseball all-star team started District 2 play on July 13 by taking on the Watauga-Hickory winner in Hickory.

That winner will advance to the district finals on July 14 (and play a doubleheader if necessary to determine the district winner).

Variable clouds with showers and scattered thunderstorms. Storms more numerous during the evening. Low around 55F. Winds light and variable. Chance of rain 50%.