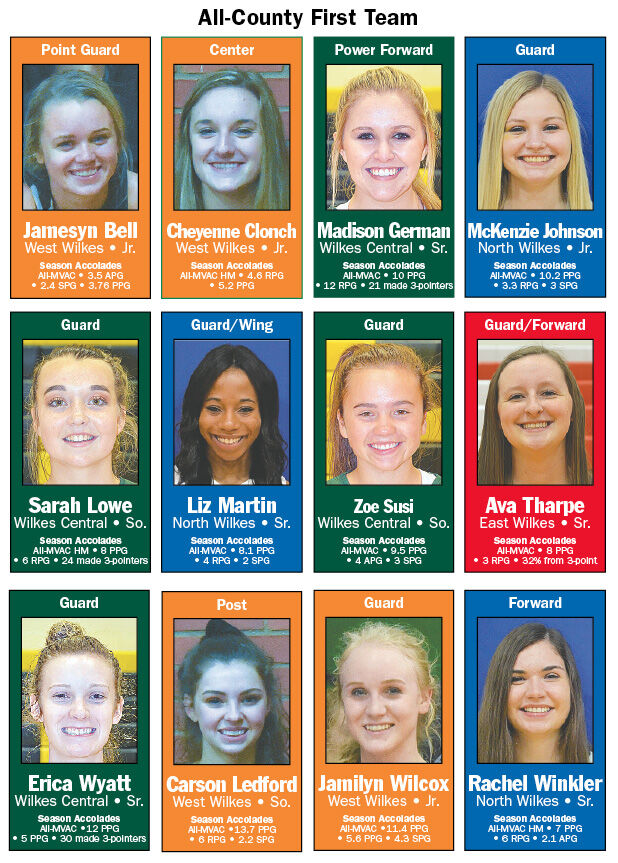 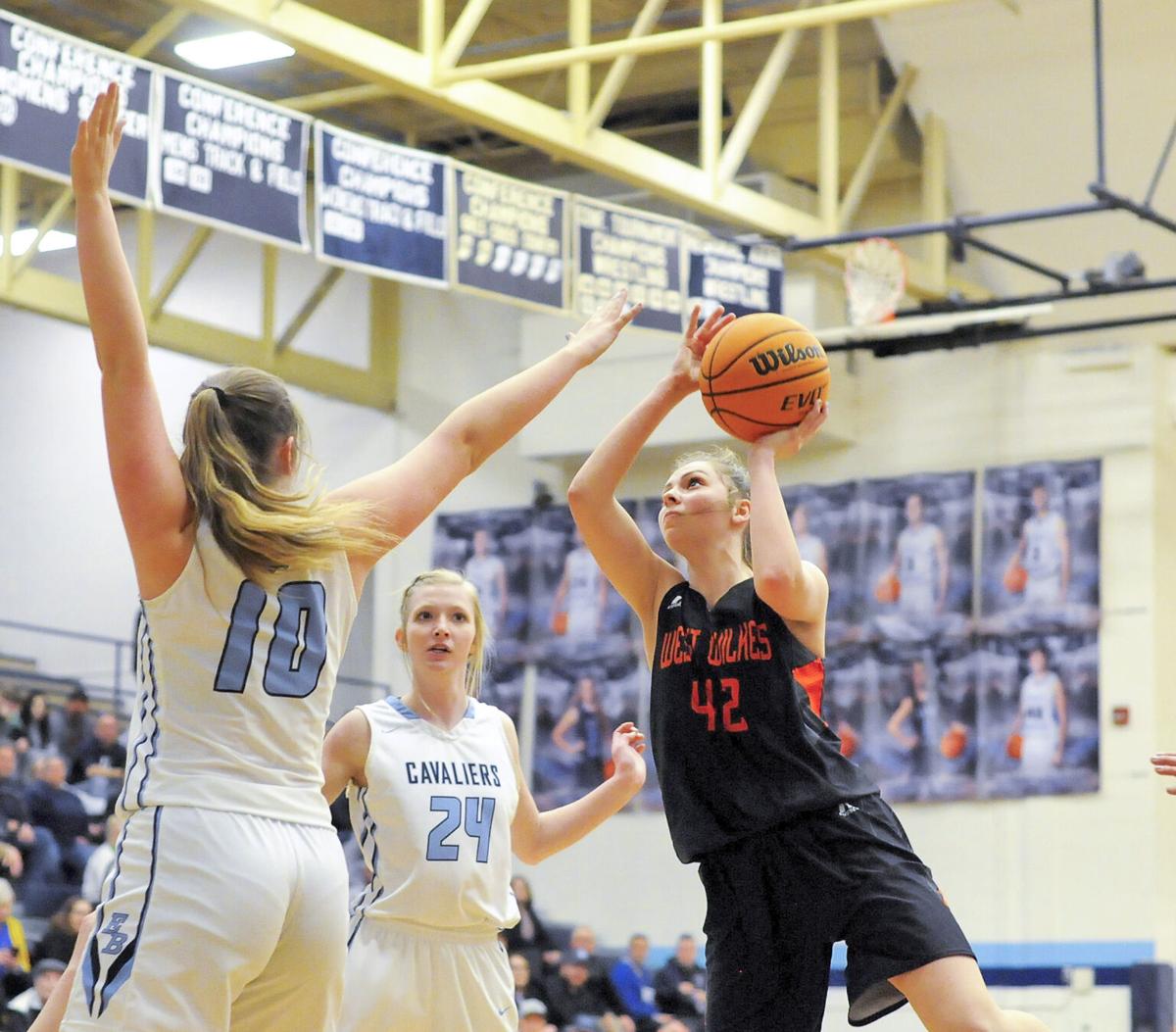 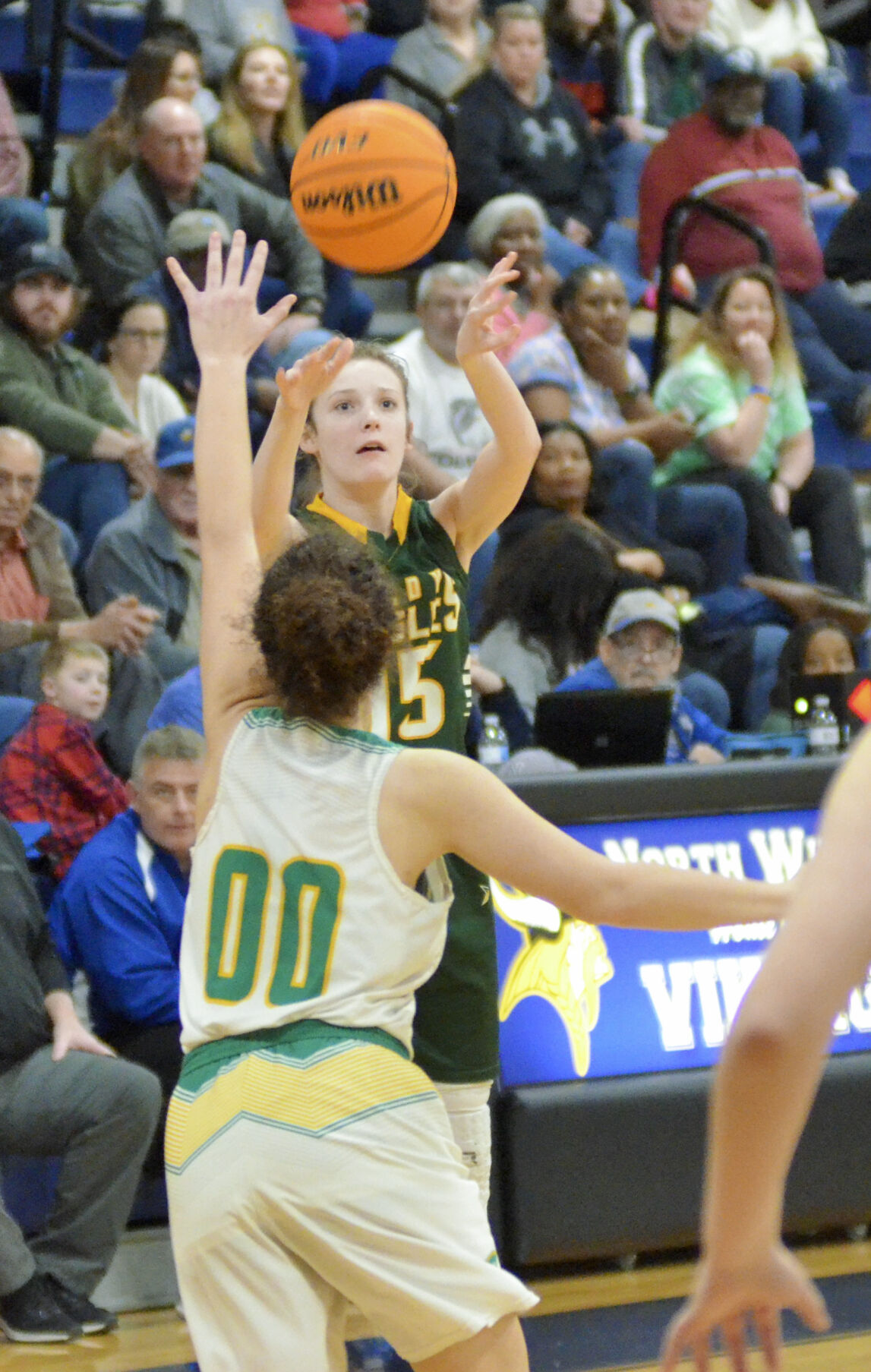 It was quite the winter for Wilkes County girls basketball.

That parity was also on display in the players nominated for the Wilkes Journal-Patriot’s Player of the Year award.

Five different players garnered at least one vote from the county coaches. Two of those players — Wilkes Central’s Erica Wyatt and West Wilkes’ Carson Ledford — each earned two votes apiece and ended up sharing the county’s top honor for the 2019-20 season.

Wyatt, a senior, was one of two Wilkes County girls basketball players to score their 1,000th career point this winter, and did a little bit of everything for the Mountain Valley Athletic Conference Co-champions.

The shooting guard averaged 12 points and five rebounds a game while earning All-MVAC honors. Wyatt, who also had 2.5 assists and three steals a game, scored 20 or more points three times during the season.

“Could not be more proud and happy for Erica, it’s well deserved. Erica was a great leader this season, both on and off the court,” said Wilkes Central Head Coach Greg Davenport. “She really stepped up her defense this season well. With her ability to shoot the three, we felt like we were never out of a game.”

While Wyatt reached the 1,000-point plateau in February, Ledford is well on her way to reaching that milestone.

The sophomore, who led the county in scoring with 13.7 points a game, currently has 662 points after two varsity seasons.

An all-MVAC selection, Ledford added six rebounds, 2.2 steals, 1.9 assists and 1.6 deflections a game for the Blackhawks, who won a North Carolina High School Athletic Association playoff game for the second year in a row.

“Carson can truly do it all. She has great post moves, can step out and shoot the outside shot, handle the ball, rebound and play great defense,” said West Wilkes Head Coach Allie Greene. “She gets a ton of steals for her position.”

Make up of the all-county team

There were 19 nominations for this year’s team, which were split into two teams. Counting the players of the year, the all-county first team has 12 players, who were nominated by their respective head coaches.

Wilkes Central and West Wilkes led the county in selections with four apiece; North Wilkes had three picks and East Wilkes had one.

Of the 12 first-team selections, nine were All-MVAC first team selections while the remaining three were named honorable mention.

Ava Tharpe made the most of her return to basketball this winter.

The senior returned to the hardwood this season after being away for a few years and shot an impressive 32 percent from the 3-point line, which included a buzzer-beating trey to defeat rival Elkin on Jan. 15.

Tharpe, who has signed to play golf for Lenoir-Rhyne, averaged a team-best eight points a game and added three rebounds and 1.5 assists a game for the Cardinals.

“Ava’s a great shooter with deep range. She’s a smart basketball player who was a team leader and helped our young team get better as the season progressed,” said East Wilkes Head Coach Matt Campbell.

Winkler, who Head Coach Steven Phillips called, “a good defender and a solid and smart player,” led the Vikings on the boards with six boards a game and added seven points a game. She was an All-MVAC honorable mention pick.

Martin, who returned to the court after missing the volleyball season, averaged 8.1 points a game and four rebounds and two steals per game.

An All-MVAC selection, Martin shot 34 percent from the 3-point line.

“Liz guarded five different spots on the court,” said Phillips. “ She’s a great teammate with great energy and was a joy to coach.”

Junior McKenzie Johnson, whom Phillps felt had  “a solid all-around season offensively and defensively,” led North Wilkes in scoring at 10.2 points a game.

The All-MVAC selection added 3.3 rebounds and two steals per game.

Jamilyn Wilcox followed up a sophomore season where she was a North Carolina Basketball Coaches Association All-District selection with a solid junior campaign that saw her reach several milestones.

Wilcox’s first milestone came when she was named to her third-straight All-MVAC team after averaging 11.4 points and 4.3 steals a game.

In the first round of the state playoffs, Wilcox eclipsed the 1,000-point plateau. She also added five rebounds, 1.6 assists and 4.6 deflections a game.

“Jamilyn is the spark to our team defensively and offensively. She is a threat from every aspect,” said Greene. “Her speed makes her hard to guard and makes her a terror on defense. She gets steals, but her deflections can frustrate the offense just as much.”

While Wilcox and Ledford were the Blackhawks’ go-to scorers, Jamesyn Bell and Cheyenne Clonch did a lot of the little things that made West Wilkes successful.

Bell, who was named All-MVAC for a second-straight year, averaged a team-best 3.5 assists, 3.76 points per game and 2.4 steals per game (with 47 total). But Bell also showed she could pile up the points when she scored 16 points in a 20-point win over MVAC-tri champion Alleghany.

“Jamesyn was a pass-first point guard with amazing court vision who also played great defense. She was the calm on the court,” said Greene. “Cheyenne did a lot of the dirty work around the board, often guarding the other team’s biggest player.”

Senior Madison German was certainly the Eagles’ muscle in the post at power forward. German, whom Davenport called, “a team leader as well as a great teammate,” grabbed a county-best 12 rebounds a game and added 10 points a game.

Sophomores Zoe Susi and Sarah Lowe complemented Wyatt on the wing with their performances.

Susi, an All-MVAC selection, averaged 9.5 points and three steals as Central’s point guard. A player whom Davenport called, “the engine that made us go” added five rebounds and four assists a game.

Known as a player whom Davenport said “played hard every time she was on the floor,” Lowe added two steals during the season that led to game-winning baskets.

Freshmen Lilly Adams and Briley Church got their first taste of varsity basketball last winter and Campbell felt both girls improved throughout the season.

Both girls averaged five points a game while Adams and Church each added six and three rebounds, respectively. Church shot 31 percent from the 3-point line and Adams averaged 2.5 steals.

Anna Phillips, one of the remaining members from the Vikings’ state runner-up team in 2017-18, closed out her high school career with an All-MVAC honorable mention nod this winter.

Phillips averaged 3.7 points and 3.5 rebounds a game; she added 3.2 assists and two steals a game.

Makayla Cornelius will return to the Vikings next season after a solid junior campaign where she averaged 7.7 points a game while hitting 41 3-pointers. She also chipped in 2.5 rebounds a game.

Kendall Stanley turned in a nice sophomore campaign as she chipped in 4.38 points a game and 1.7 rebounds while adding 1.1 assists and .9 steals.

With the graduation of German and Wyatt, the tandem of Makenna Freeman and Karlie Anderson could be called on to pick up the slack for the 2020-21 season.

Anderson averaged four points and eight rebounds a game and closed out her season on a high note when she was named to the MVAC’s all-tournament team.

The junior added 1.5 steals a game.

Scattered thunderstorms in the morning, then mainly cloudy during the afternoon with thunderstorms likely. Potential for heavy rainfall. High around 80F. Winds light and variable. Chance of rain 80%.

Thunderstorms likely in the evening. Then a chance of scattered thunderstorms later on. Potential for heavy rainfall. Low 69F. Winds light and variable. Chance of rain 80%.

Not a political talking point