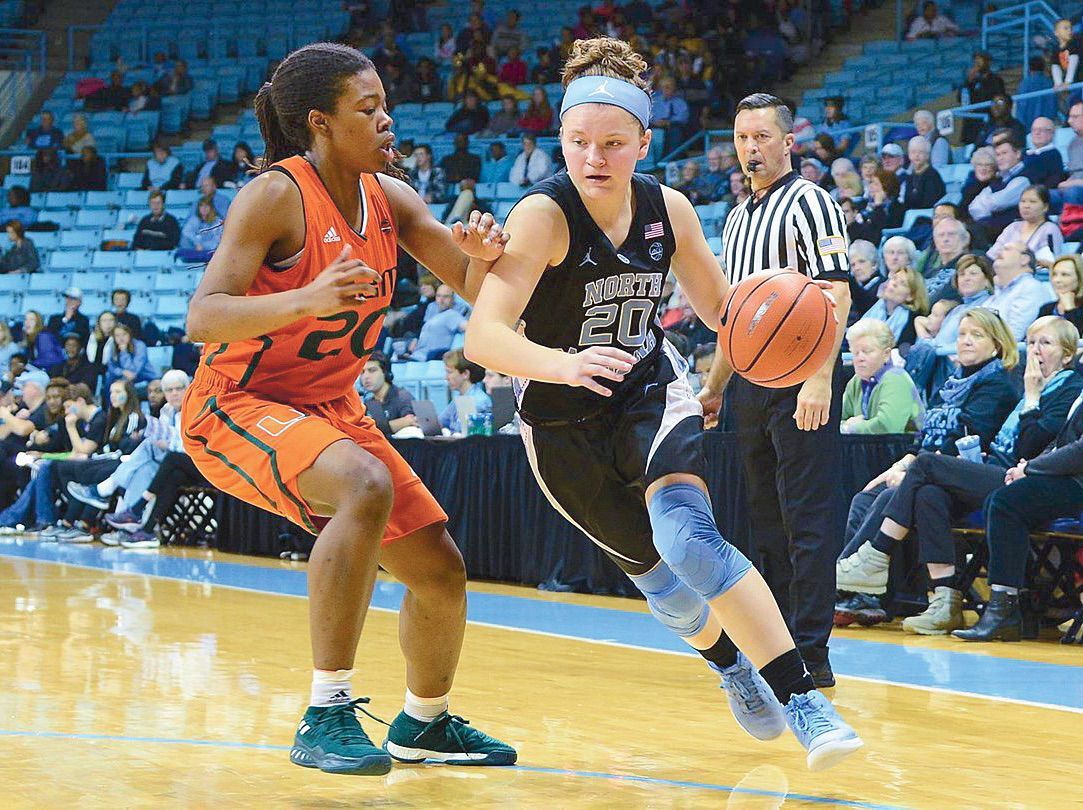 Leah Church dribbles the ball past an opponent during a game at UNC Chapel Hill last season. 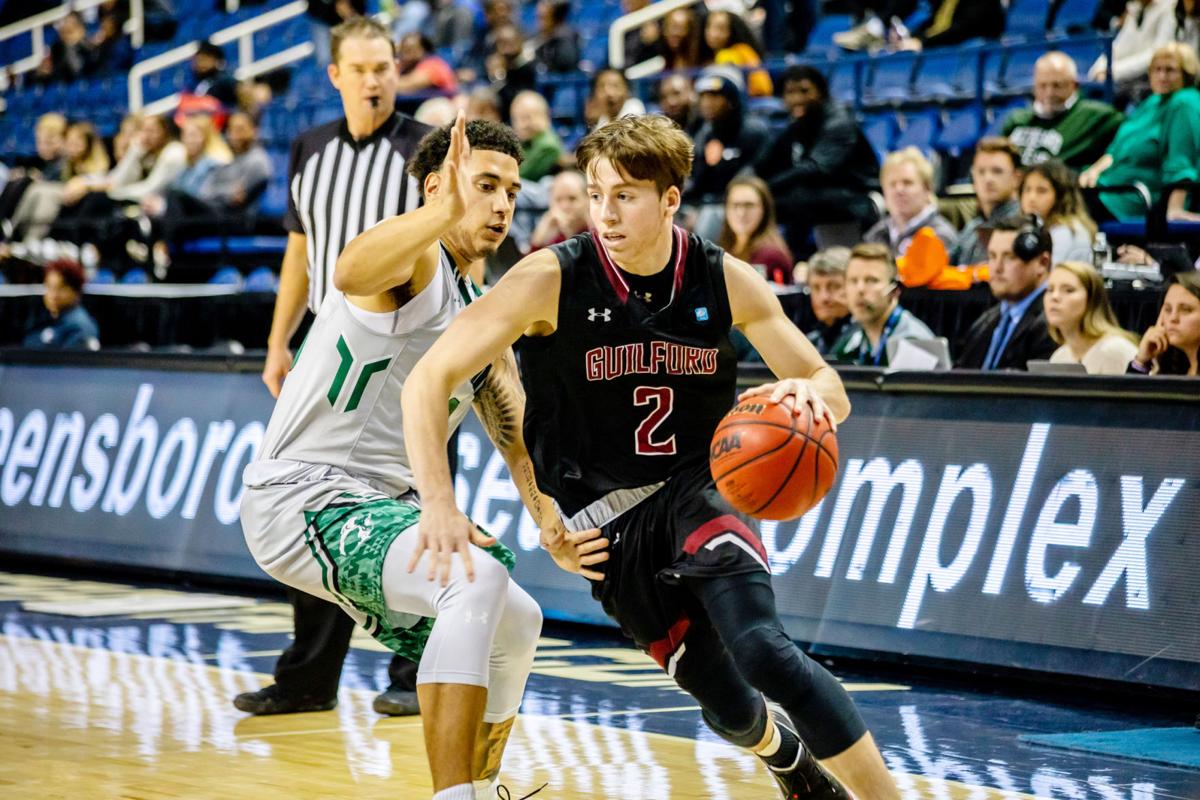 Joah Logan played in all 26 of Guilford’s games last season, starting 22 of them. 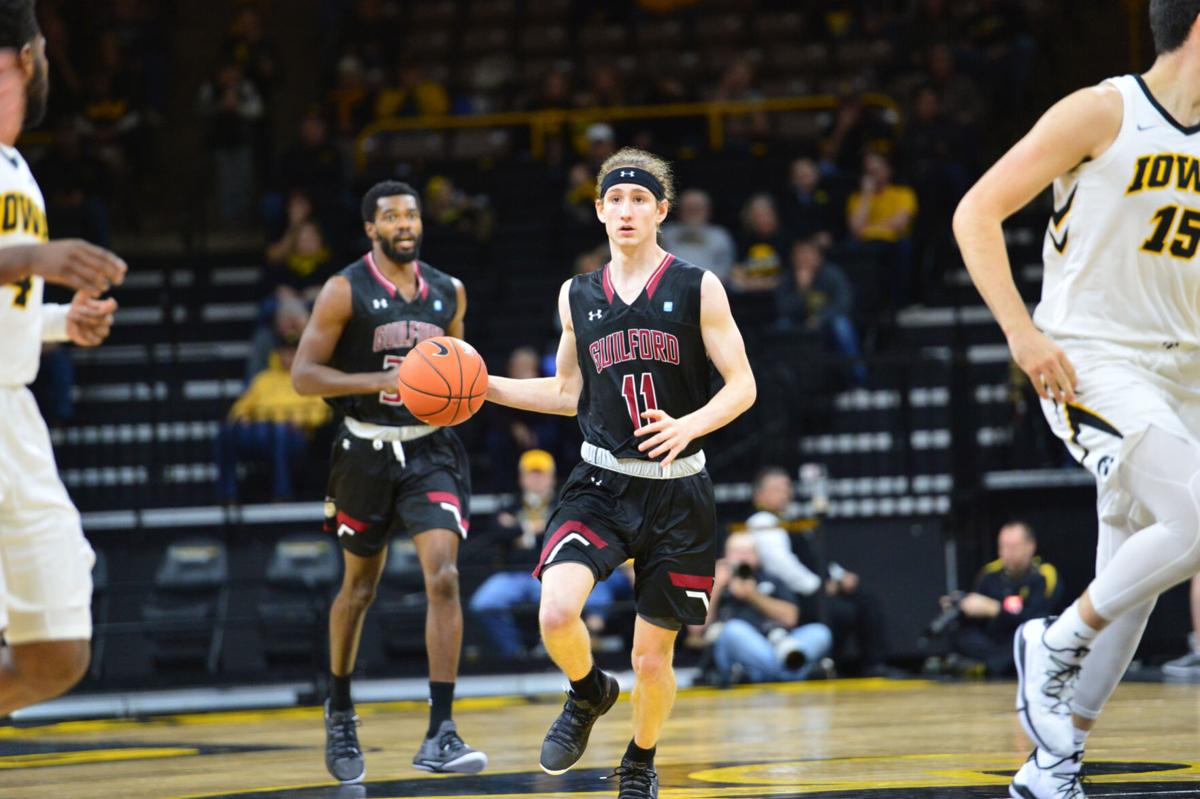 Jordan Wallis saw action 14 games, all off the bench, after returning following a season-ending injury in 2018-19. 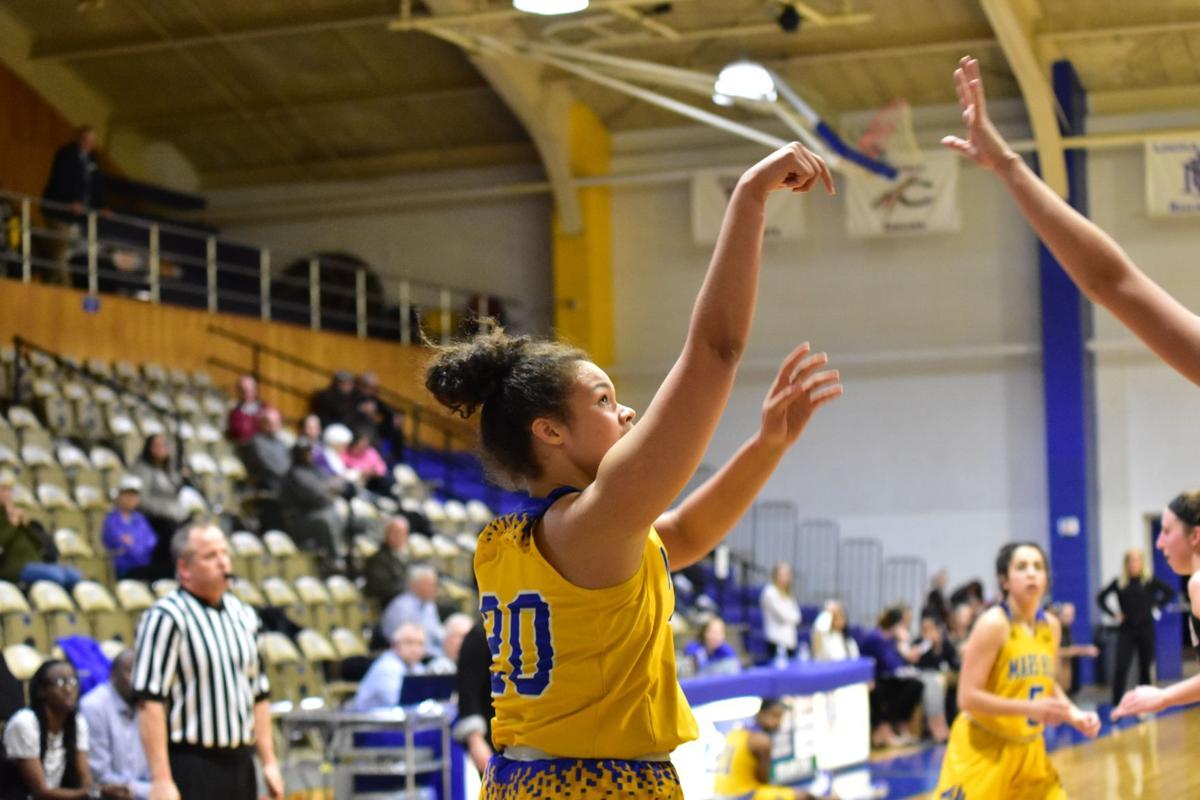 Alexis Pardue puts up a shot against an opponent last season.

Leah Church dribbles the ball past an opponent during a game at UNC Chapel Hill last season.

Joah Logan played in all 26 of Guilford’s games last season, starting 22 of them.

Jordan Wallis saw action 14 games, all off the bench, after returning following a season-ending injury in 2018-19.

Alexis Pardue puts up a shot against an opponent last season.

COVID-19 shut down almost any opportunity for college basketball teams to continue their 2019-20 postseasons.

Despite seeing their seasons end prematurely, Wilkes County athletes playing college hoops were able to play a majority of their seasons, if not their entire seasons.

But before attention turns to the 2020-21 basketball season (which will not begin for many players until January), here’s a look back at how the county’s collegiate athletes fared on the hardwood.

As a junior, Church played in 29 of 30 games (missed one with injury) and averaged 4.1 points and 1.4 rebounds in an average of 14.7 minutes per game. She scored a season-high 13 points against Illinois on Dec. 5.

Church started the final three games of the regular season and took her first non-3-pointer of the season in the home game against Virginia Tech — through the first 23 games, every shot had been from long range — on Feb. 9. She also hit her first 10 free throws of the season and finished 24-for-28.

She averaged 7.7 points off the bench in the three-game stretch against Florida State, Miami and Louisville. Her most productive game of the winter came in an 83-65 loss to Notre Dame where she grabbed a season-high seven rebounds and scored four points while playing a season-high 29 minutes.

The Tar Heels finished the winter 16-14 and 7-11 in the Atlantic Coast Conference.

Church posted on Social Media over the summer that she has elected to graduate early (in December) and will maintain her final year of eligibility should she want to play elsewhere as a graduate transfer.

Denny returned from injury this past winter and played just nine games (one start), but made the most of her final season.

The redshirt senior averaged 1.9 points a game but scored a season-high 10 points (just two off her career high) on 4-of-5 shooting in her final game — a loss to Carson-Newman in the opening round of the South Atlantic Conference tournament. She also played a season-high 14 minutes in the game.

Denny also won Comeback Player of the Year during the third annual Bears Choice Awards Ceremony for the school.

In the 16 games, Ellis scored in nine of them, including a season-high 11 points in Coker’s 66-48 win over Erskine on Nov. 16. She also played a season-high 16 minutes in the game.

At the conclusion of the season, Ellis announced that she was entering the transfer portal. She chose to transfer to Division III Ferrum College in Virginia.

After a solid season as a true freshman, Greene turned in an even better sophomore season where he saw action 26 of the Maroon’s 27 games, including 20 starts.

Greene led Roanoke in scoring at 12.2 points a game and scored a game-high 19 points his final game of the season — a 60-59 defeat to Randolph-Macon in the semifinals of the Old Dominion Athletic Conference tournament.

In her senior season, Livengood averaged 1.9 points in 15 games (including four starts). She also averaged 1.6 rebounds a game.

Her best scoring game of the season in a 64-34 win at Randolph on Jan. 29. She scored five points in eight minutes off the bench. She also added a pair of rebounds.

The Maroons saw their season end in a 66-61 defeat to Guilford College in the semifinals of the ODAC tournament.

Logan saw action in all 26 of the Quakers games this past weekend and started 22 of them. Guilford finished 18-8 and 10-6 in the ODAC. They lost in the quarterfinals of the ODAC tournament.

The junior averaged 5.1 points and 3.7 rebounds a game while scoring in double figures four times this past winter. He also added 1.6 assists a game.

Logan’s best performance of the winter came in a 73-56 win over Berry College on Nov. 23 when he notched a season-high 14 points. He also added three rebounds and three assists.

He also notched a season-high 10 rebounds twice, and dished out a season-high seven assists during an 85-52 win over Shenadoah on Jan. 25.

The Lions had a three-win improvement this past winter as they went 4-24 and 2-20 in SAC play.

Pardue followed up a solid freshman campaign with a solid sophomore one as she played in 27 games with 26 starts. She averaged 9.1 points and 4.8 rebounds a game for Mars Hill. She also shot 44.3% from the field.

Pardue scored a season-high 25 points in an 81-66 loss at Lenoir-Rhyne on Feb. 26. She also grabbed a season-high 10 rebounds in the game (five on the offensive glass, which was a season best).

She nearly added a second-straight double-double in the Lions’ 104-70 over Queens University on Feb. 29 where she scored 24 points and grabbed nine rebounds.

Listed as a guard/forward, Phillips played in 28 of the Indians’ 29 games this winter

The sophomore averaged 2.9 points and fourth on Catawba’s roster in 3-pointer percentage at 36.1%. In SAC play, she averaged 3.1 points a game.

Catawba went 23-6 this past season, including a 17-5 mark in conference season. The Indians’ season came to an end in a 75-71 loss to Anderson in overtime in the semifinals of the SAC tournament on March 7.

Wallis saw action 14 games, all off the bench, after returning following a season-ending injury in 2018-19.

The junior averaged 1.3 points and 1.1 rebounds per game for the Guilford.

His best game for the Quakers this past season came in a win over Eastern Mennonite University on Feb. 8. Wallis, who played a season-high 11 minutes, scored a season-high five points and grabbed a season-best six rebounds.

Note: Look for a recap on the other Wilkes County winter athletes who competed in wrestling, swimming and indoor track and field in later editions of the Wilkes Journal-Patriot.

Don’t let your guard down