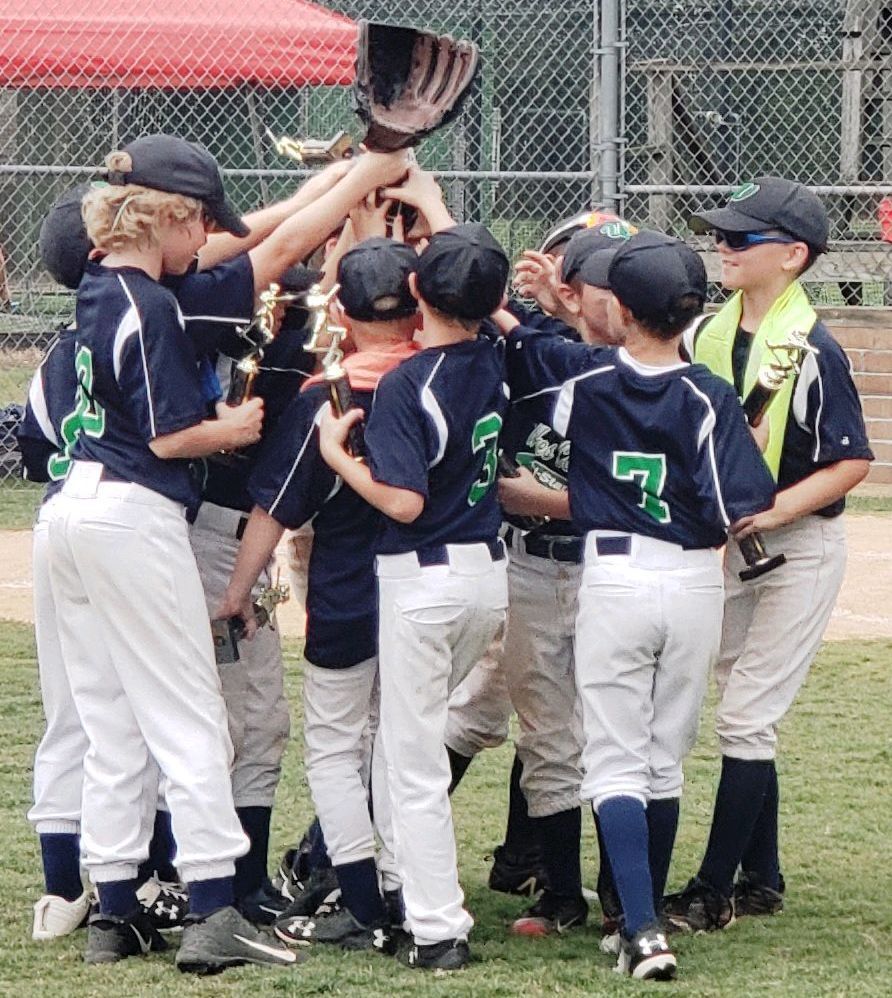 The Wilkes County 12U Tar Heel Leagues all-stars get words of motivation from assistant coach Scotty Lambert, kneeling, and head coach Ryan Nichols, who is beside Lambert. This is following a 3-2 loss to host Williamston on Saturday.

The Wilkes County 12U Tar Heel Leagues all-stars get words of motivation from assistant coach Scotty Lambert, kneeling, and head coach Ryan Nichols, who is beside Lambert. This is following a 3-2 loss to host Williamston on Saturday.

After dropping its opening game on Thursday against Sandhills Blue, Wilkes rebounded with six straight victories to earn a spot in Sunday’s finals against the same team. The local all-stars dropped that contest, 10-3.

“The boys did something pretty amazing—they won six games in a row to get to the championship,” said Matt Snider, the Wilkes coach. “It was truly one of those once in a lifetime, amazing sports stories. I was blessed to be part of it.”

Snider added that that his club played and won more games than any other team in any age bracket of the Tar Heel Leagues baseball state tournaments.

In the title game, Cohen Snider and Elijah Mills each went 3-for-3 at the plate to pace Wilkes. They each drove in a run, as did Connor Huffman. Scoring runs for Wilkes were River Wilcox, Kenan Huffman and Snider.

In its opener, Wilkes dropped a 17-6 decision to Sandhills Blue on Thursday afternoon.

“It was a tight game, and the kids fought very hard,” according Snider. The game ended on a diving catch made by shortstop Caiden Andrews up the middle of the infield, he added.

Mills and Ethan Neuens each went 3-for-3 at the plate to pace Wilkes’ 19-hit attack.

Connor Huffman, the winning pitcher, also went 2-for-3 with a double and a team-best two RBIs. Others with two hits were Wilcox, Kenan Huffman, Snider and Aaron Hamby.

With the win, Wilkes advanced to play Youngsville on Friday afternoon. Wilkes emerged victorious in that contest, 8-5.

Wilkes kept winning on Saturday, taking a 5-2 win over host Williamston and a 6-5 decision over Yancey County, with the winning run scoring in the bottom of the sixth.

Later on Saturday, Wilkes shut out Garner, 4-0, to advance to the consolation finals against South Edgecombe. Wilkes won that game, 11-7, for a second shot at Sandhills Blue.

“Sandhills allowed one run all tournament against all other teams, but we scored 10 on them” in two games, noted Snider.

The double-elimination coach pitch tournament featured 16 teams from across the state.

Wilkes qualified for the state tournament by finishing second to Yancey County in the Tar Heel Leagues District 2 tournament that concluded July 9 in Wilkesboro.

In the 12U bracket, Wilkes came up short against Sandhills in the consolation finals on Saturday, 11-1, and finished third.

“We were not ready to play in the final game,” noted Ryan Nichols, the Wilkes head coach. “The loss to Williamston earlier took a lot out of us physically and emotionally. We made several mistakes that we normally would not have made.”

Aubrianna Nichols drove in Wilkes’ lone run and had one hit, as did Hunner Brown, Mason Cardwell and Cash Wilmoth.

Wilkes opened play Thursday with a 10-5 victory over Knightdale, propelling them into the quarterfinals Friday morning against Perquimans.

Winning pitcher Mikaylynn Kinder allowed no earned runs and struck out 11 in five innings. She also went 3-for-4 at the plate with a home run and two runs scored.

Brown also went 3-for-4 at the plate and scored twice. Jeb Boykin and Jake Lambert both went 2-for-2 at the dish. Taylor Bumgarner hit a line-drive two-run homer in the fourth.

“We were a little slow to get started but we really started rolling in the third inning,” said Nichols. “KK (Kinder) and Taylor both hit the ball out of the park. KK was dominating on the mound. It was big to go out there and get a win in the first game; it really helped our confidence.”

The local all-stars turned back Perquimans, 4-3 in seven innings, to advance to the semifinals against host Williamston on Saturday morning.

In the seventh, Brown singled with one out, moved to third on Kinder’s groundout and scored on a dropped third strike.

“We struggled a little at the plate but were able to get it done,” noted Nichols. “Taylor pitched great and Mason came in to stop the rally in the sixth. Hunner really hit the ball well---everything we did offensively revolved around him.”

Williamston posted a tight 3-2 win over Wilkes in eight innings Saturday, handing the local all-stars their first loss and a matchup with Sandhills later in the day.

“This was a heartbreaking loss,” said Nichols. “Williamston is a really talented team and we played a phenomenal game. It’s just heartbreaking for us to play as well as we did and have it slip away in that fashion. It’s a game that will be remembered for a long time by everyone involved.”

Nichols explained that the winning run scored on a sacrifice fly to center that was overthrown to home plate.

Brown went 3-for-4 for Wilkes and Kinder went 2-for-4. Zoey Woodruff took the loss after pitching the seventh and eighth innings. Cardwell and Kinder also pitched for Wilkes.

The double-elimination tournament featured eight teams from across the state.

“I’m extremely proud of what this team accomplished,” summarized Nichols. “They really came together and played as a team and gave it everything they had. A couple of things go differently and we are in the championship game on Sunday undefeated. Our pitching and defense were amazing and we hit the ball well at times.”

Nichols added that Hunner Brown was “unstoppable at the plate. He made only two outs in our last five games going back to the district final.”

Wilkes advanced to the state tournament after taking the Tar Heel Leagues District 2 championship on July 14 in Jefferson.

Partly cloudy in the evening with more clouds for later at night. Low near 55F. Winds light and variable.