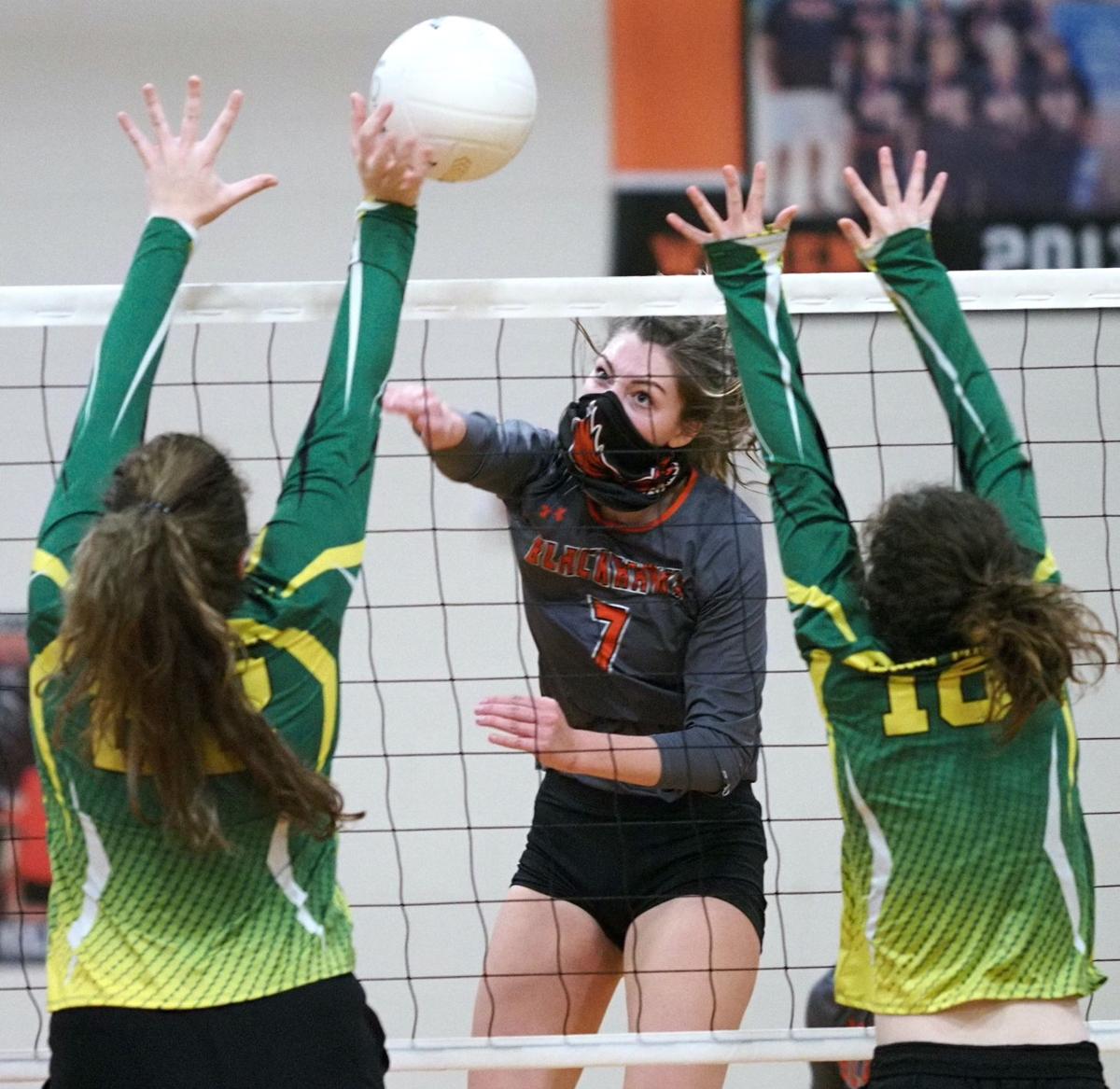 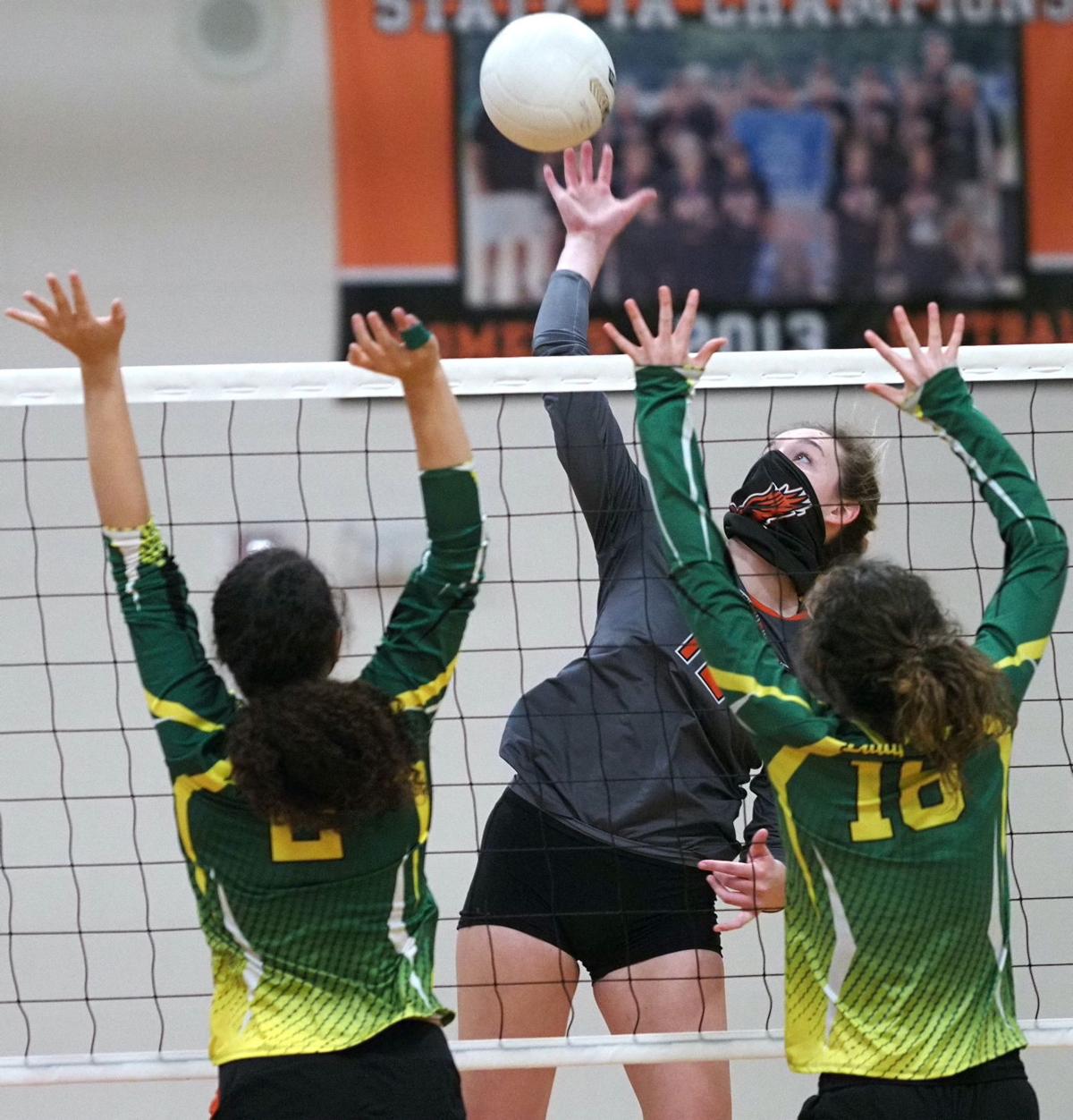 West Wilkes senior Cheyenne Clonch closed out her team’s four-set win over Alleghany on Dec. 22 with a powerful spike, push over and game-ending kill. 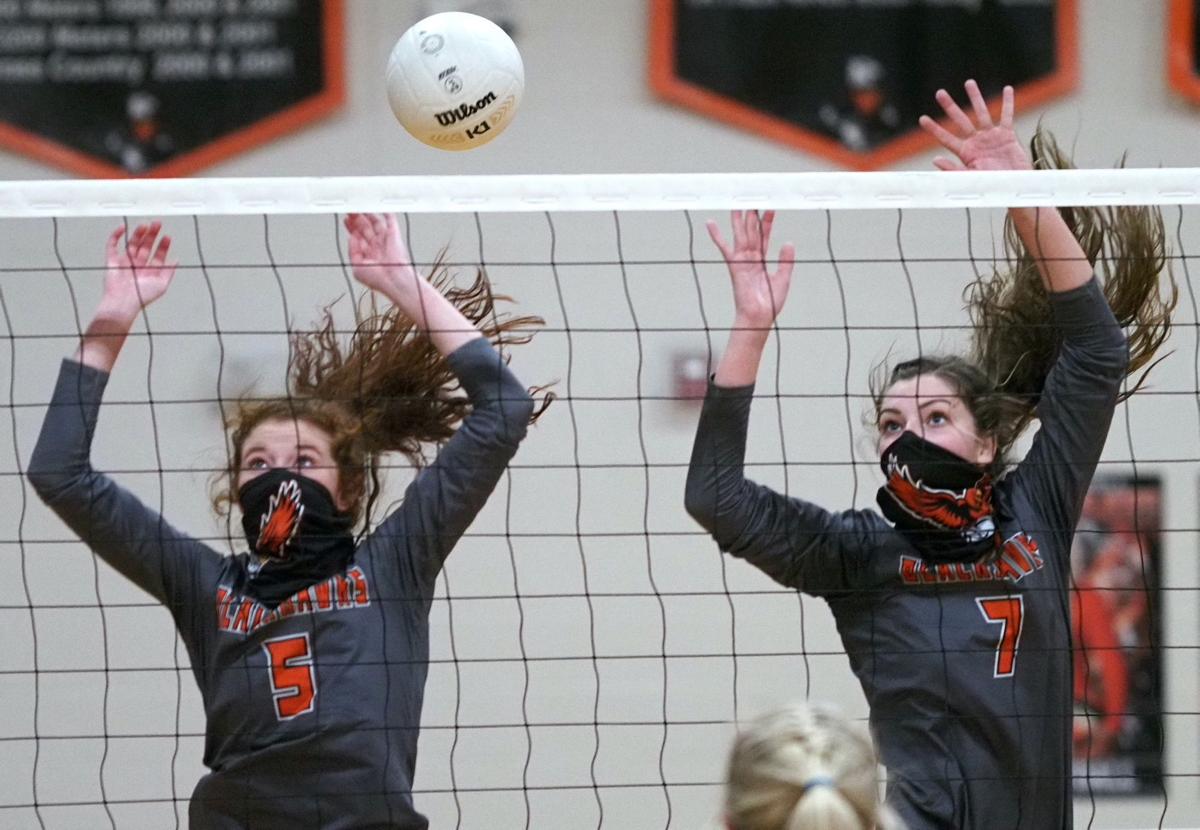 West Wilkes senior Cheyenne Clonch closed out her team’s four-set win over Alleghany on Dec. 22 with a powerful spike, push over and game-ending kill.

The West Wilkes varsity volleyball team got a perfect 10 from the judges on Dec. 22.

The Blackhawks moved to 10-0 with a key four-set victory over Alleghany in Millers Creek and took a giant step toward a third straight Mountain Valley 1A/2A Athletic Conference title.

With the season sweep of the second-place Trojans (8-2), West needs only two more wins in its four remaining league games to clinch the crown.

West senior hitter Cheyenne Clonch, who finished with 13 kills, closed out the match in the tight fourth set with an emphatic spike, push over and final kill to make it 25-21.

“The fourth set was a little closer but I felt that we were in complete control,” said West Coach Steve Bryan. “The total team stepped up and contributed to the win.”

Alleghany, riding a six-game win streak and seeking to avenge its only loss of the season—a four-setter in Sparta on Nov. 23—started strong in the first set, winning it 25-22 to send a message to the home team.

“Alleghany came out strong hitting on all cylinders,” said Bryan. “We dropped the first set due to unforced errors.”

Tied 22-all in the first set, the Trojans reeled off three straight points on a Kenzi Lyall kill, a Lyall block of Carson Ledford’s kill attempt and Hannah Broman’s stuff of a Katie Nichols kill try.

Ledford, a junior hitter, was a commanding presence at the net, leading West with 18 kills and 10 blocks. “Carson’s return was exhibited in those kills,” added Bryan.

The Blackhawks found their groove in the second and third sets, winning each by the comfortable margin of 25-11.

In the second, West jumped out to a 6-0 lead with senior setter Jamesyn Bell in service, sparked by two Ledford blocks and a Katie Nichols kill that prompted an Alleghany timeout.

Bell, Bryan’s player of the game, led West with 49 assists and four service aces. “Jamesyn played an excellent match on offense and defense,” he said. “She dug up numerous tips and her blocking coverage was excellent.”

The Blackhawks put away the second set with five straight points, coming off a Trojan hitting error, a Nichols ace, a Sydney Sheets push over and a pair of Clonch kills.

West kept applying pressure in the third set, forcing Alleghany to call timeouts after taking 8-2 and 15-7 leads. The Blackhawks closed out the set on a Trojan serving error, a Clonch ace and a Clonch kill from deep midcourt.

“We finally settled in and started executing our offense, and we took over the match in the second and third sets,” said Bryan.

“It was the first time that I had my full team back together in three weeks,” noted Bryan.

The Eagles came out blazing in the first set, posting a 25-12 victory. Central’s final three set points came on an East serving error and a kill and push over from junior middle hitter LindaGrace York.

But the Cardinals fought back in the second set, tying the match with a 25-23 decision. Down 22-21, East rallied with a Hailey Edwards ace and a kill and bump over by Emma Jolly. An Eagle hitting error closed out the set in East’s favor.

Central regained the momentum in the third set, taking another 25-12 triumph. The Eagles closed the set with four straight points, on an East serving error, a Zoe Mathis tap over, a Karlie Anderson bump over and a ferocious Mathis kill.

In the fourth set, East had sliced the Central lead to 19-17 before senior outside hitter Jacklyn Richardson went on a tear. Richardson had three kills as the Eagles reeled off the final six points, which also included a Payton McManus push over and a pair of Cardinal errors.

“We played really well,” said Central Coach Kevin Anderson, whose club improved to 3-6. “It was a good night for the seniors,” who were Richardson, Anderson, Christa Walsh, Riley Johnson and Cassie Adams.

“The girls played very well,” said Bryan. “They executed our offense very well. Our serving was difficult for Starmount to handle.”

Starmount dipped to 2-8 in MVAC play.

The Buckin’ Elks improved to 8-2 while the Vikings slipped to 1-8 in the MVAC.

The Eagles improved to 4-6 and positioned themselves only a game behind the 4-4 Huskies for fourth place in the MVAC.

“We had a great win on our Pink Night against a really good team,” said Anderson. “We spent a couple days really preparing for this game, and I hope it showed the girls what good preparation can do. They really bought in to what we wanted to accomplish and executed well.”

Anderson felt that good service helped his club build early leads in the game. “Ashe has some really good players, and we knew we needed to put pressure on their passers and try to take them out of getting comfortable running their attacks.”

The Eagles had a high hitting percentage and passed better as the match progressed, according to Anderson. “We also started getting some blocks and touches at the net at crucial times, which was a huge help. I am pleased that we continue to play hard and are looking at every point being crucial for us,” he added.