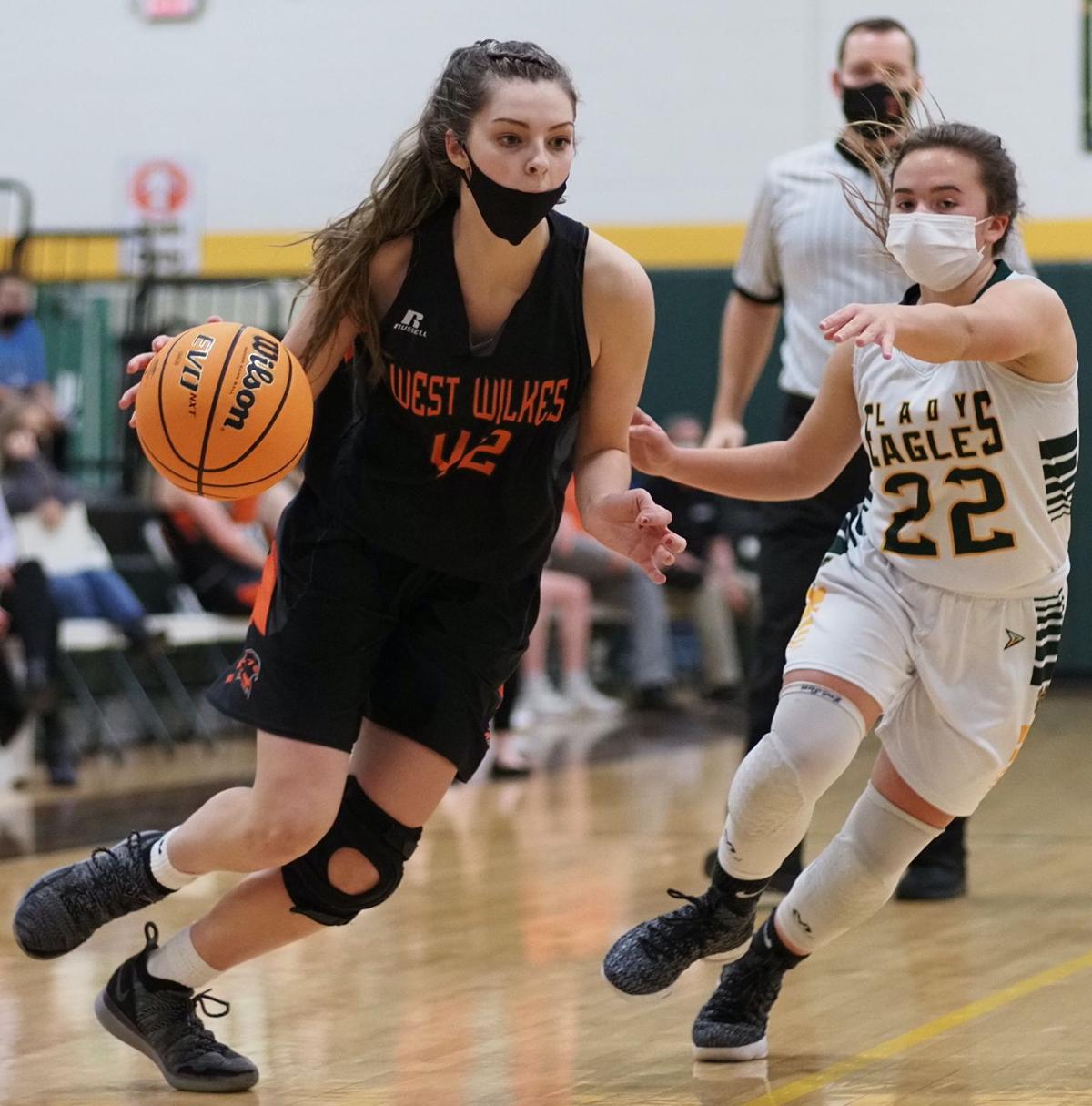 West’s Carson Ledford, who led all scorers with 18 points, here drives to the basket as Central’s Zoe Susi defends on Friday in Moravian Falls. 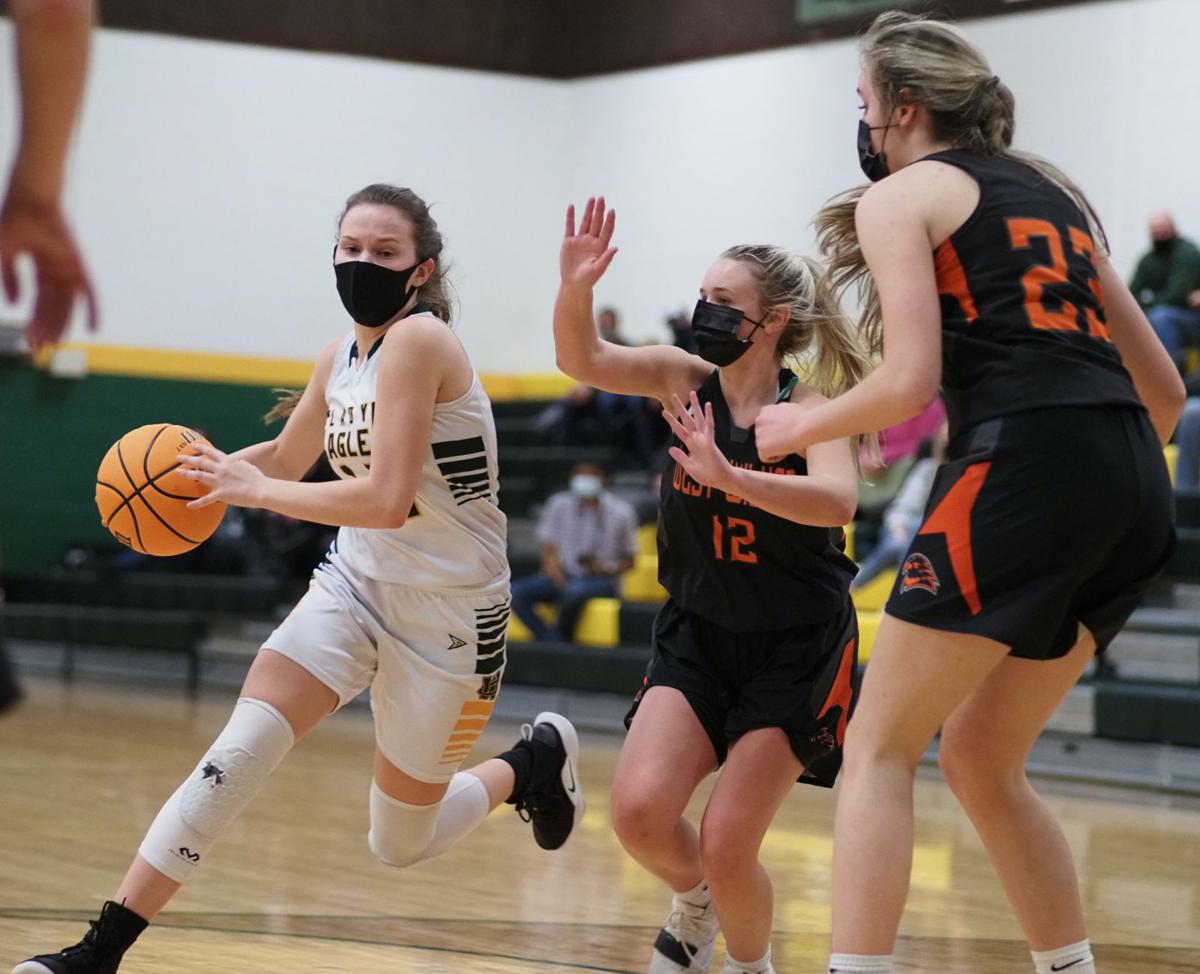 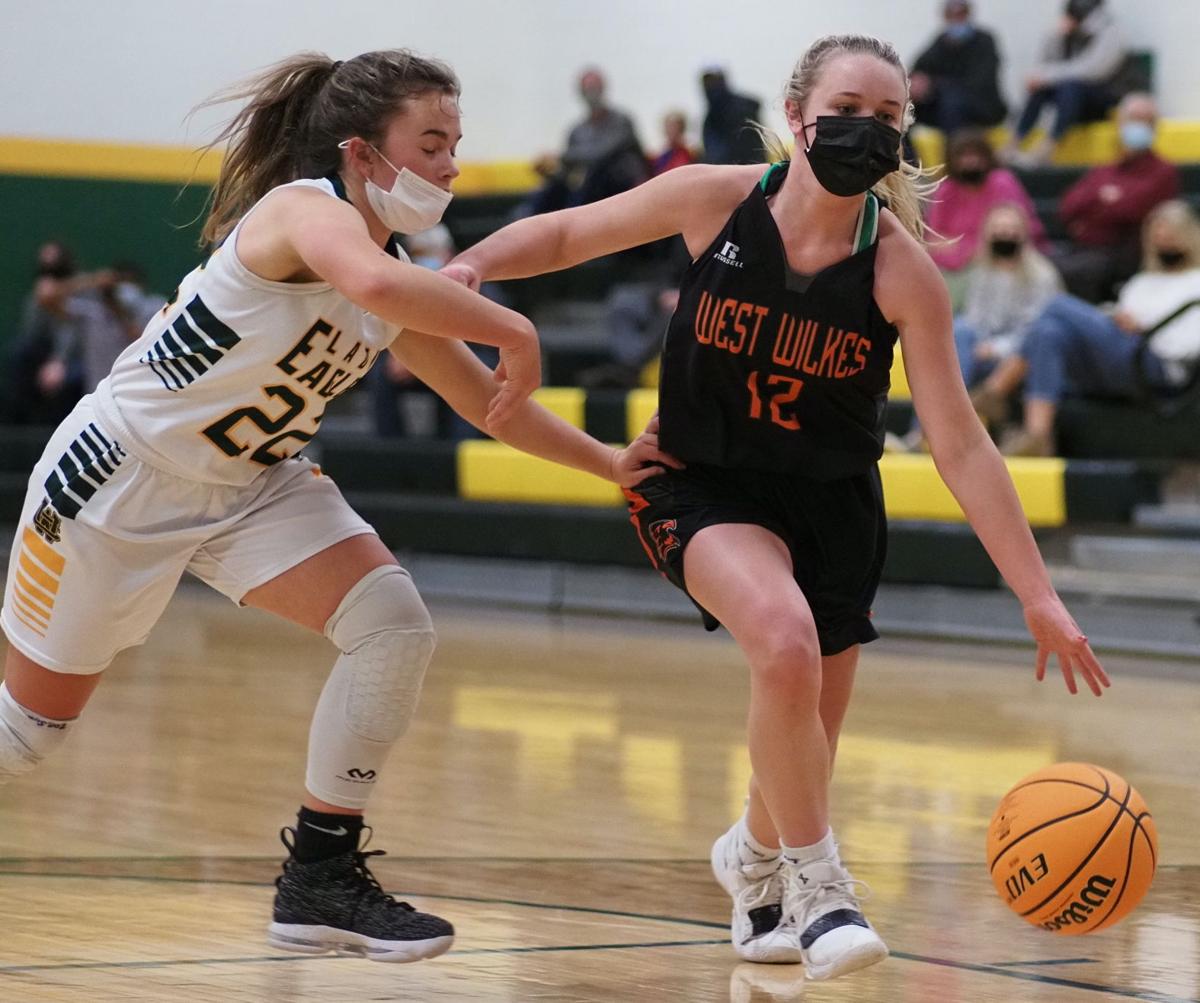 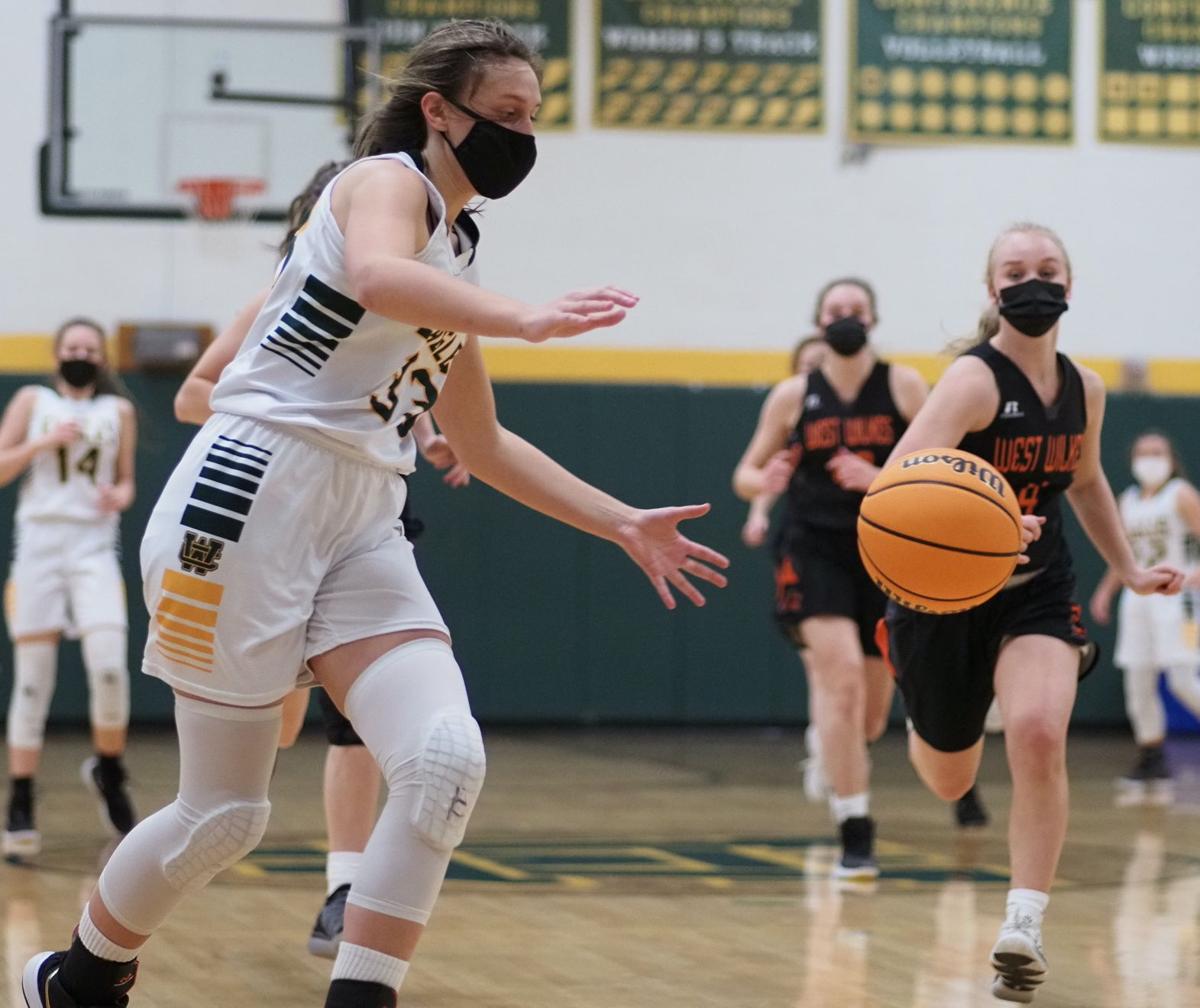 Wilkes Central senior Jacklyn Richardson catches up to a long outlet pass in the first half Friday in Moravian Falls. West’s Jamilyn Wilcox trails on the play. 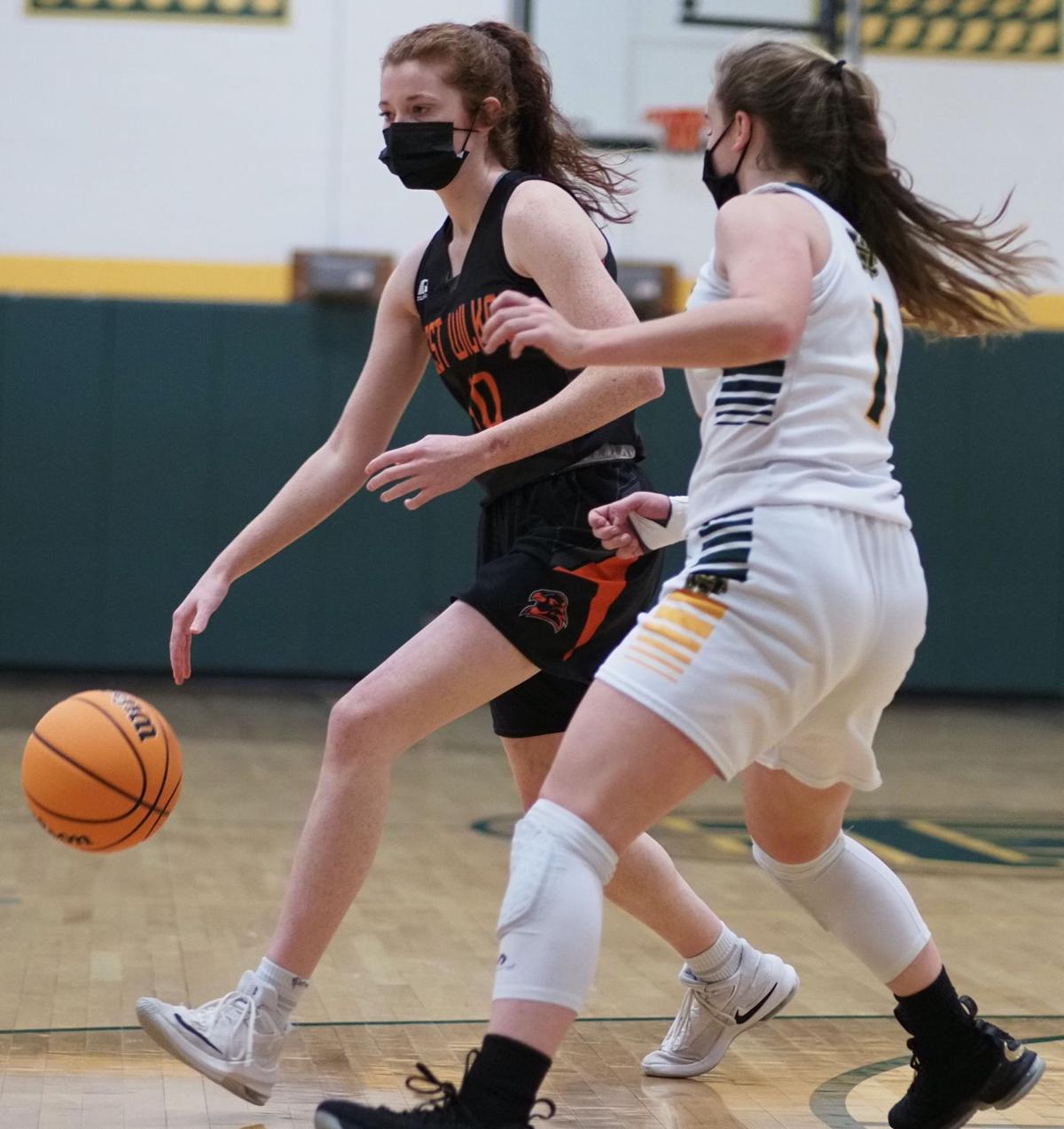 West’s Carson Ledford, who led all scorers with 18 points, here drives to the basket as Central’s Zoe Susi defends on Friday in Moravian Falls.

Wilkes Central senior Jacklyn Richardson catches up to a long outlet pass in the first half Friday in Moravian Falls. West’s Jamilyn Wilcox trails on the play.

The Blackhawks rallied from a 12-point first-half deficit to knock off Wilkes Central in Moravian Falls, 44-34.

After sweeping the season series from the second-place Eagles, West improved to 8-0 in the Mountain Valley 1A/2A Athletic Conference and has a two-game lead over the 8-2 Eagles with five contests left in league play.

The Blackhawks have never captured an outright league title. Two seasons ago, they finished tied with Central for a share of the first regular-season crown in program history.

West’s road victory was sparked by a pair of 10-0 runs to close out the first half and to bridge the third and fourth quarters.

“We got down early but our girls didn’t panic and we patiently worked out of the hole,” said Allie Greene, the Blackhawk coach. “Ours girls kept their composure well and I think that is growth from seasons past.”

Late in the second quarter, back-to-back baskets by Carson Ledford cut the Central advantage to 21-14 with 2:12 left and then Jamilyn Wilcox dished to Gracie Lambert for a layin and a 21-17 Eagle lead with 1:05 remaining.

“Another player that stepped up was Gracie,” said Greene. “She did some really good things defensively for us.”

With 45 seconds left in the first half, Ledford missed the front end of a 1-and-1 but grabbed the loose ball in the lane and scored from short range to make it a 21-19 game at the break. Nine of Ledford’s game-high 18 points came in the second quarter.

Central scored the first four points of the second half but West later tied it at 27-all after Kacey Triplett followed up her own miss and completed a three-point play with 1:12 to play in the third quarter.

West took its first lead of the game—one it would hold for the remainder of the contest—after Parker Childress sank a 3-pointer from the left corner on a feed from Ledford. The trey—West’s only one of the night on 15 attempts—made it 30-29 with 32.9 seconds left in the third.

“Parker hit a big three in the second half to boost us offensively,” added Greene.

Wilcox connected on a long two-pointer from the top of the key off a feed from Lambert just before the third-quarter buzzer, spotting West a 32-29 lead going into the final period.

The 10-0 run spilled into the fourth quarter with Wilcox feeding Ledford for a short basket in the lane and Wilcox completing a three-point play. Wilcox had all five of her points in the critical spurt.

“Carson did a great job getting to the hole and putting the ball in the basket in the second half,” noted Greene. “Carson and Cheyenne were huge on the boards with 10 rebounds apiece. And Jamesyn with five rebounds, being the smallest person on the team, is big, too.”

The Eagles would get no closer than five points the rest of the way.

“I was very proud of the way we battled,” said Central Coach Greg Davenport. “We played extremely hard. We struggled to score at times, but credit West’s defense for that.”

In the final minute of the first quarter, West got baskets by Kacey Triplett and Clonch off a feed from Jamesyn Bell to reduce the Central lead to 10-8.

A driving layup and two free throws by Susi spotted Central a 14-8 lead with 6:02 left in the second quarter. The junior point guard paced the Eagles with 16 points, eight rebounds and two assists.

Susi sank another 3-pointer with 4:28 left in the first half, boosting the Eagle lead to 21-9 and prompting a West timeout.

“Our shooting from the outside was off and I think that threw us off in the first half a little but we did a good job adjusting and attacking the basket,” said Greene. “I think each girl contributed to the win. I’m a proud coach of these girls on and off the court.”

West’s game next week with Alleghany has been declared a “no contest” because the Trojans have canceled the rest of their season due to low numbers on the team.

With West and other MVAC teams playing fewer than 14 regular-season games, league standings and playoff berths will be determined by winning percentages.

Wilkes Central blew out Starmount on Monday in Moravian Falls, 82-42.

Anderson sank a trio of 3-pointers. Lowe had eight rebounds while Susi dished out nine assists and made six steals.

”It was probably our most complete game,” said Greg Davenport, Central’s coach. “We played well on both ends of the floor. We created some turnovers early with our press and got off to a good start.”

Davenport continued, “I was really happy with the way we bounced back after our loss Friday night to West. We shot the ball well from the outside, too.The Eagles upped their season mark to 8-2 while the Rams falter to 1-7.

North Wilkes took control early in a 58-30 win Saturday at Alleghany in Sparta.

The Vikings outscored the hosts 19-2 in the opening quarter and never looked back.

“It was a great team win,” said North Coach Steven Phillips. “All 10 players got significant minutes and made huge contributions, and 8 out of 10 scored.”

“The effort was good, and we were happy to get the win,” said Phillips. “The players competed hard on very little rest, so I am very proud of them.”

North, which improved to 4-4, will complete the rest of its MVAC schedule with varsity games only, due to several junior varsity players being brought up to play with the three remaining varsity players. Seven varsity players have been quarantined for the remainder of the season.

Alleghany ends its season at 0-5, one year after going 11-3 and earning a share of the league title.

Ashe County posted a 57-42 win over North Wilkes in Jefferson on Friday.

North Coach Steven Phillips noted that it was close until the last three minutes. Ashe made 15-of-18 free throws and “killed us on the offensive glass” with about 17 offensive rebounds.

“I was proud of the effort,” said Phillips. “The girls really competed hard for the entire game. Give Ashe credit—I thought they played well and made their free throws down the stretch.”

The Huskies improved to 4-4 while the Vikings slipped to 3-4.

Ashe will also complete the rest of its MVAC schedule with varsity games only, due to several junior varsity players being brought up to fill out the varsity roster.

East Wilkes controlled the middle quarters and knocked off Starmount in Ronda on Friday, 41-32.

The Cardinals outscored the visitors 22-10 in the second and third quarters.

Peyton Mastin and Kierston Johnson each had nine points for East. Briley Church and Macie Bell chipped in with eight and five, respectively.

The Cardinals improved to 4-5 and remain a game and a half ahead of Elkin in the battle for the lone guaranteed 1A playoff berth. The Rams fell to 1-6.

Junior point guard Zoe Susi led the Eagles with 19 points and eight steals. She was Coach Greg Davenport’s player of the game.

“It was a total team effort,” said Davenport. “After a big second quarter (in which the Eagles outscored the Trojans 27-3) we were able to play allow our bench to play the majority of the second half. I was very proud of their performance.”

Central improved to 7-1 while Alleghany remained winless at 0-3.

The Cardinals led by only a single point entering the final quarter but took control after sophomore guard Briley Church drained a 3-pointer from the left corner to make it 30-26.

Junior guard Macie Bell then canned a trey from the right wing to spot East a 33-28 lead with six minutes to play. Later, a 5-0 run iced the win for the Cardinals, as Lily Adams followed up a miss, Bell sank a 15-footer and Church made the front end of a 1-and-1 with 1:45 left.

“The ladies played hard and did a nice job defending and rebounding for the entire 32 minutes,” said East’s coach, Matt Campbell. “We had balanced scoring and did a great job moving the ball and knocking down open shots.”

The Cardinals improved to 3-5 while Ashe dipped to 2-4.

“I thought we played well in spurts,” said Central Coach Greg Davenport. “Our bench players also chipped in and gave us some valuable minutes.”

The Eagles improved to 6-1 while the Cardinals fell to 2-5.

The Blackhawks held the Buckin’ Elks scoreless in the fourth quarter and for the first seven minutes of the third period.

“We played great defense,” noted Allie Greene, the West coach. “We held one of the best players in the conference (Audrey Jennings) to five points and held the whole team to 17 points. Jamesyn (Bell) played great defense on Jennings and had help from Kendall (Stanley) and Kacey (Triplett) as well.

“Overall we played amazing defense as a team. We forced bad shots and dominated the boards. I was extremely pleased with our hustle and defense.”

Carson Ledford, who paced West with 17 points, “had a great night inside the paint. We also had another great night outside the arc with seven team 3-pointers.”

Parker Childress had a trio of treys and added 11 points, as did Cheyenne Clonch. Bell had a pair of 3-pointers.

The league-leading Blackhawks improved to 7-0 while Elkin slipped to 1-4.