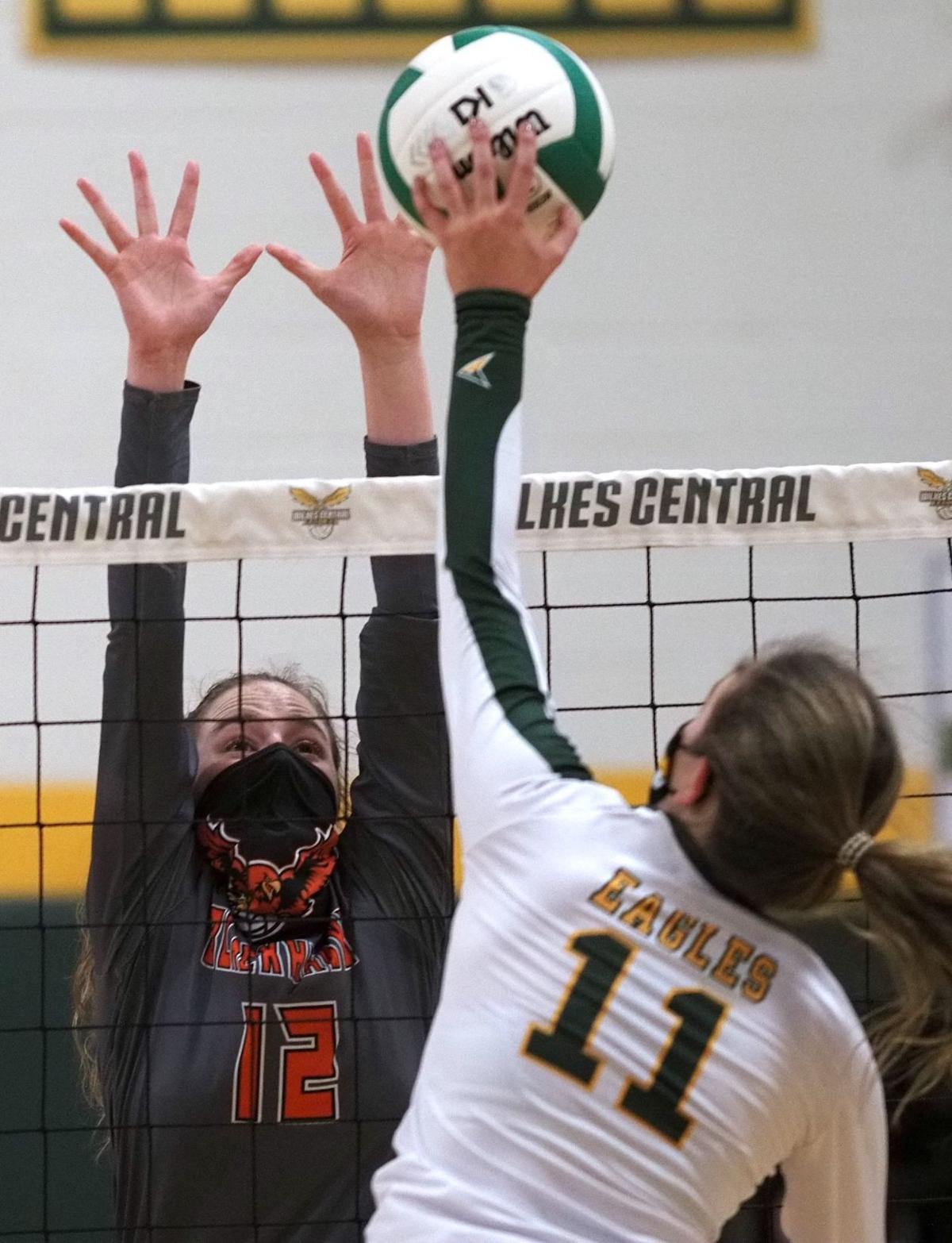 West Wilkes junior Sydney Sheets makes one of her three blocks on a kill attempt Thursday by Wilkes Central junior Zoe Mathis. Sheets and the Blackhawks prevailed in the match, three sets to none. 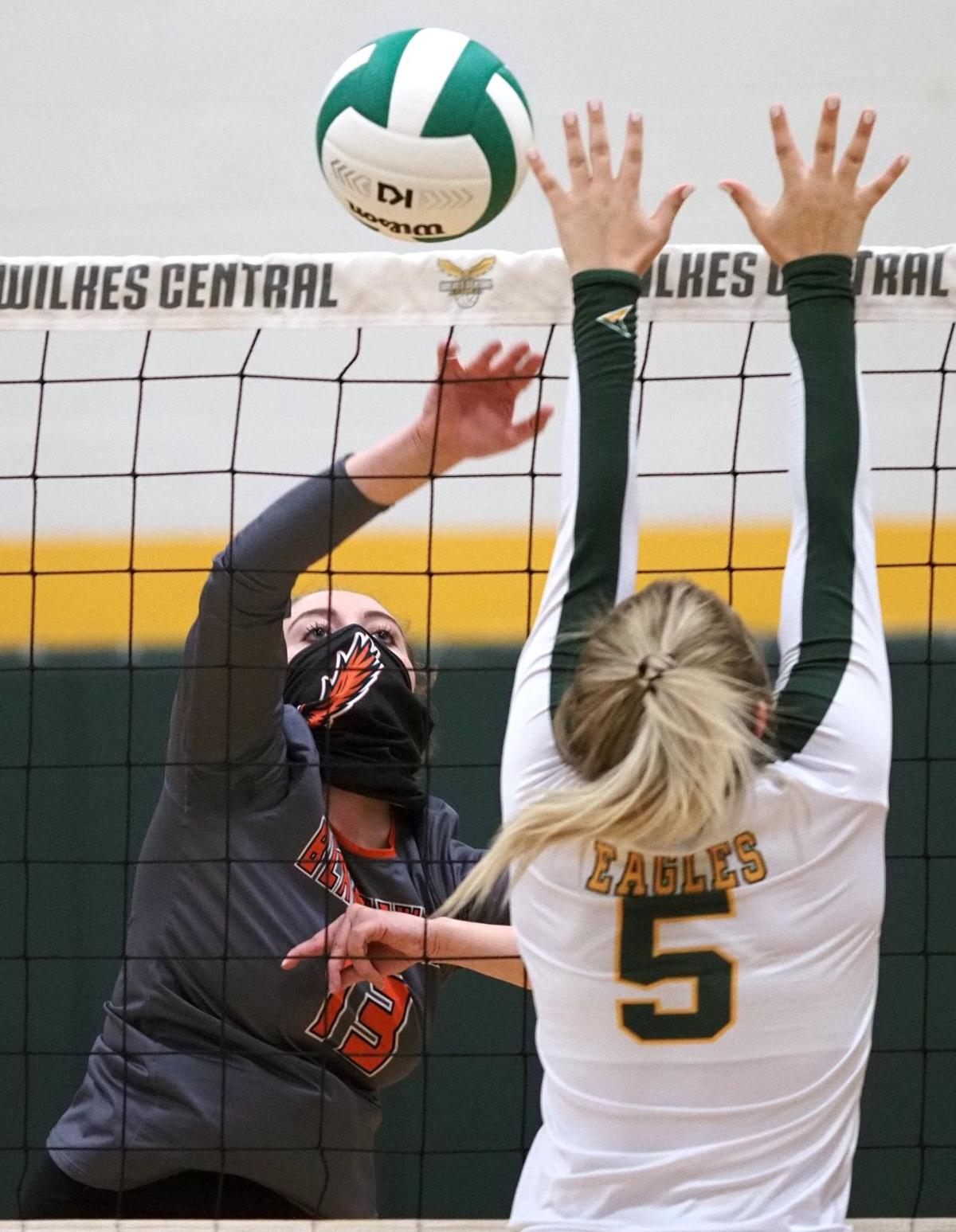 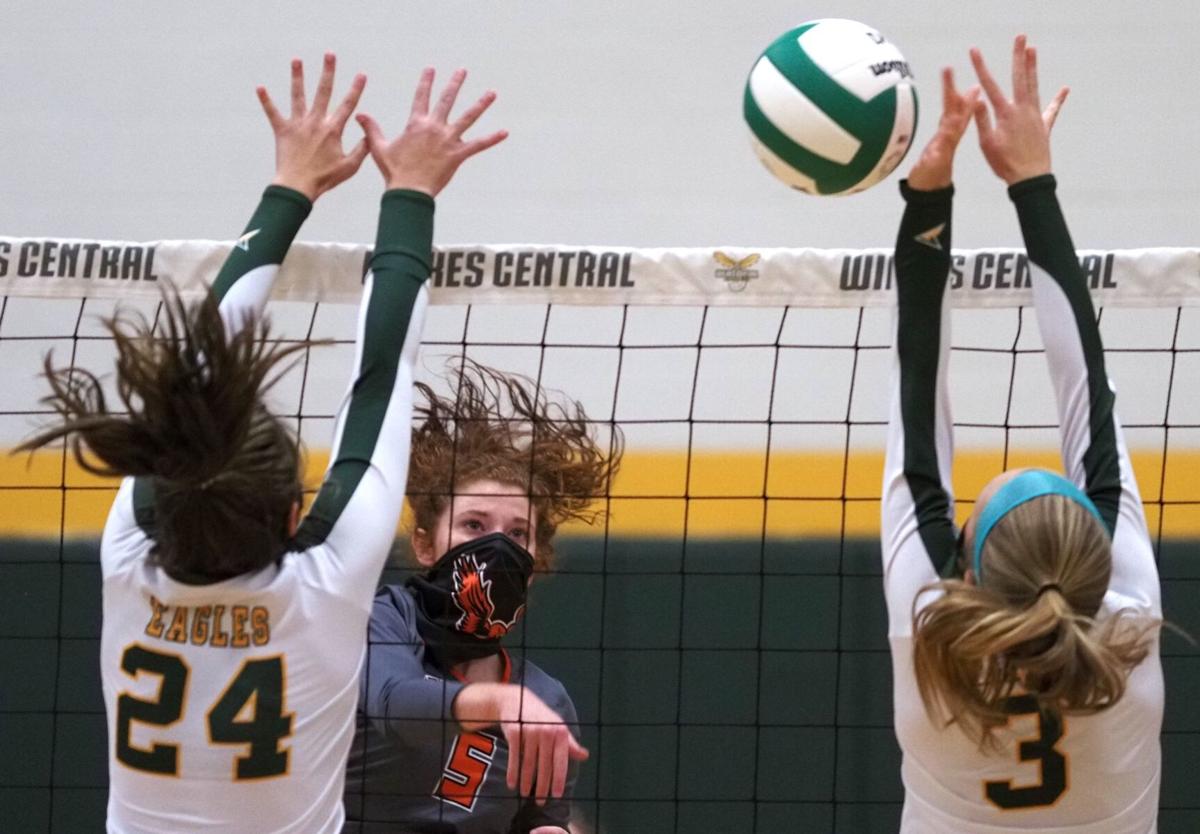 West Wilkes junior Sydney Sheets makes one of her three blocks on a kill attempt Thursday by Wilkes Central junior Zoe Mathis. Sheets and the Blackhawks prevailed in the match, three sets to none.

With three chinks in its armor missing, the West Wilkes varsity volleyball team got reinforcements from its bench on Thursday to stay unbeaten in the Mountain Valley 1A/2A Athletic Conference.

Sheets was Coach Steve Bryan’s player of the game after contributing six kills, three blocks and a service ace to West’s victory in Moravian Falls. She filled in admirably for all-league hitter Carson Ledford.

“Sydney really stepped up and delivered—she played great,” said Bryan. “The team executed well and our passing and serving was on target. The girls remained focus and ran their offense. It was a great win.”

With senior libero Sophie Nichols also out of action, West got 13 digs from junior Katie Nichols and 10 from senior Gracie Lambert, who also had eight kills and two aces.

In the final set, Central got a spark from senior libero Riley Johnson in service and went from a two-point deficit to a short-lived 7-5 lead. Johnson had two aces to pace the Eagles.

The third set was knotted at 11-11 before West went on a 14-5 run to close out the match. Twin kills from Lambert closed out the scoring for the Blackhawks.

Clonch led West with 17 kills, 11 serves received, three blocks and two aces. Jamesyn Bell set up most of those kills en route to a team-best 34 assists.

Wilkes Central fell to 1-3 with the loss and began a stretch of three games in five days, two of which are makeup matches due to COVID-19 quarantining.

The Trojans improved to 6-1 while the Cardinals dropped to 1-6.

On Friday, Central picked up a road win at Starmount, three sets to one.

“Being off two weeks got us a little behind but I felt like we started getting back into rhythm as the match progressed,” said Eagle Coach Kevin Anderson. “Starmount is an improving team, and we knew we needed to play at our best level in order to compete. Once we settled in, and our passers, setter, and hitters were focused, we played really well.”

Anderson noted that his hitters and defensive specialists had season-high numbers versus the Rams, as did senior setter Karlie Anderson. “We also served extremely well. When we do the little things that it takes, and encourage each other, we are a really good team.”

Central gave Alleghany, the second place team in the conference, a run for its money in a four-set thriller on Monday in Moravian Falls.

"I felt like we played really great tonight," said Central Coach Kevin Anderson. "We are starting to believe, but we need to clean up our unforced errors we continue to make. I was really pleased with our effort."

The Trojans (7-1) won the first two sets, 25-20 and 25-21. But then the Eagles upended the visitors in the third set, 25-23, handing Alleghany only its fourth lost set of the season. The other three were delivered by West Wilkes on Nov. 23.

In the third set, the Eagles benefitted from an Alleghany hitting error and a tapover by Zoe Mathis to end the scoring.

"After losing the first two sets, which I thought we competed in well, the girls' mindset was that they knew they could play with Alleghany—we just had to change a couple things," said Anderson. "I was really pleased with the 'no quit' attitudes we brought, and that we continued to play hard, execute our offense, and make a competitive match out of it."

Central pushed Alleghany to the limit but fell short in the extended fourth set. With the set tied at 21-21, Central made two unforced errors before calling a timeout. A tapover by Karlie Anderson cut the Trojan lead to 23-22 but an Alleghany kill made it 24-22.

Facing match point, the Eagles (2-4) made a block at the net and got a kill from Jacklyn Richardson to tie the score at 24-all. A kill and service ace from Alleghany’s Chloe Pruitt accounted for the final set score of 26-24.

"Alleghany lost a hitter due to injury at the end of the third set, which changed their lineup but it also made us change our approach in the last set," noted Anderson. "It was a fun match to be in."

Mathis paced the Eagles with 18 kills and five blocks. Richardson chipped in with 17 kills and Olivia Rush had four blocks. Anderson led the way with 36 assists and 14 digs.

After giving one of the perennial conference powers a run for its money, Anderson said his team "feels like we belong and can play with the top teams when we play at our best level."

Showers in the evening, then partly cloudy overnight. Low around 45F. Winds NW at 5 to 10 mph. Chance of rain 60%.

Now is time to act and pray for nation

Roadside litter has become even worse