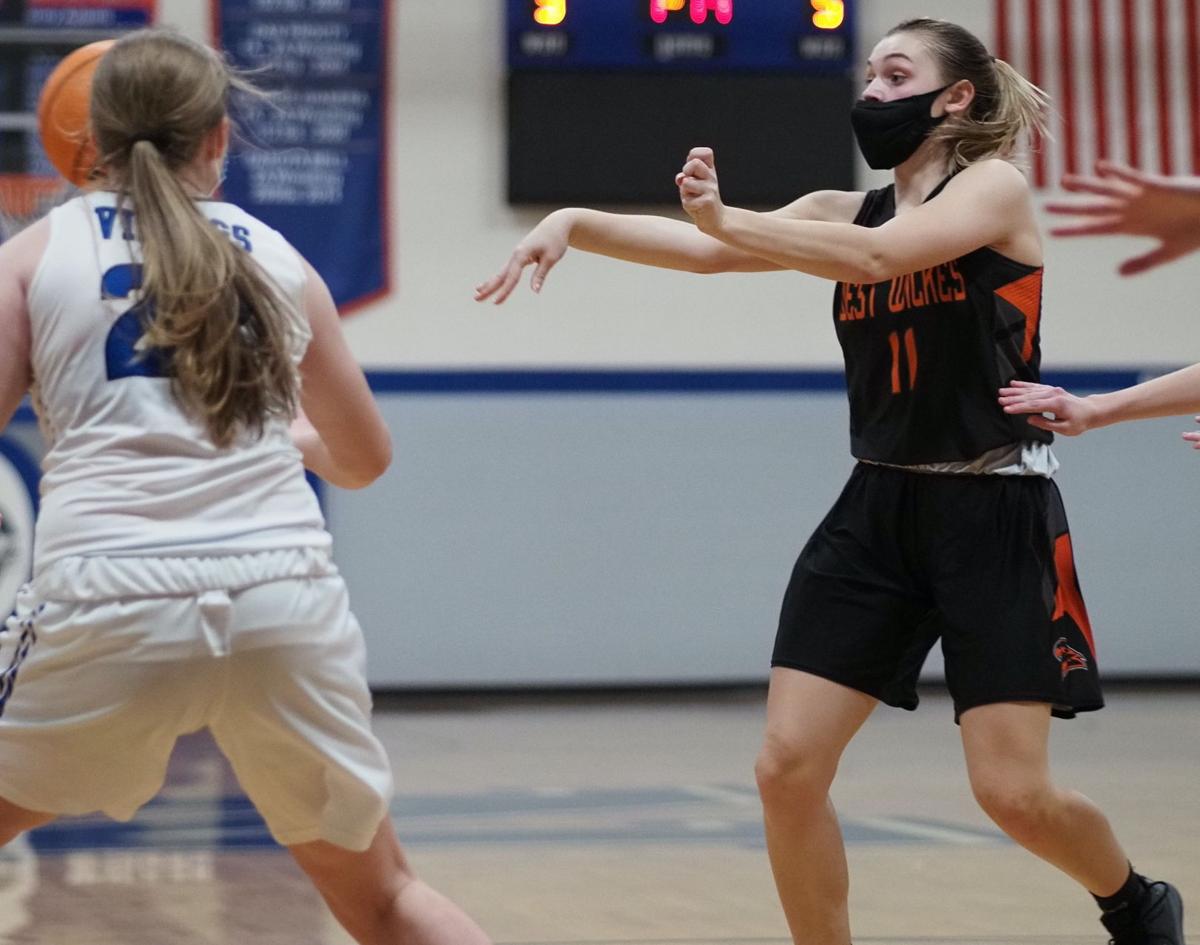 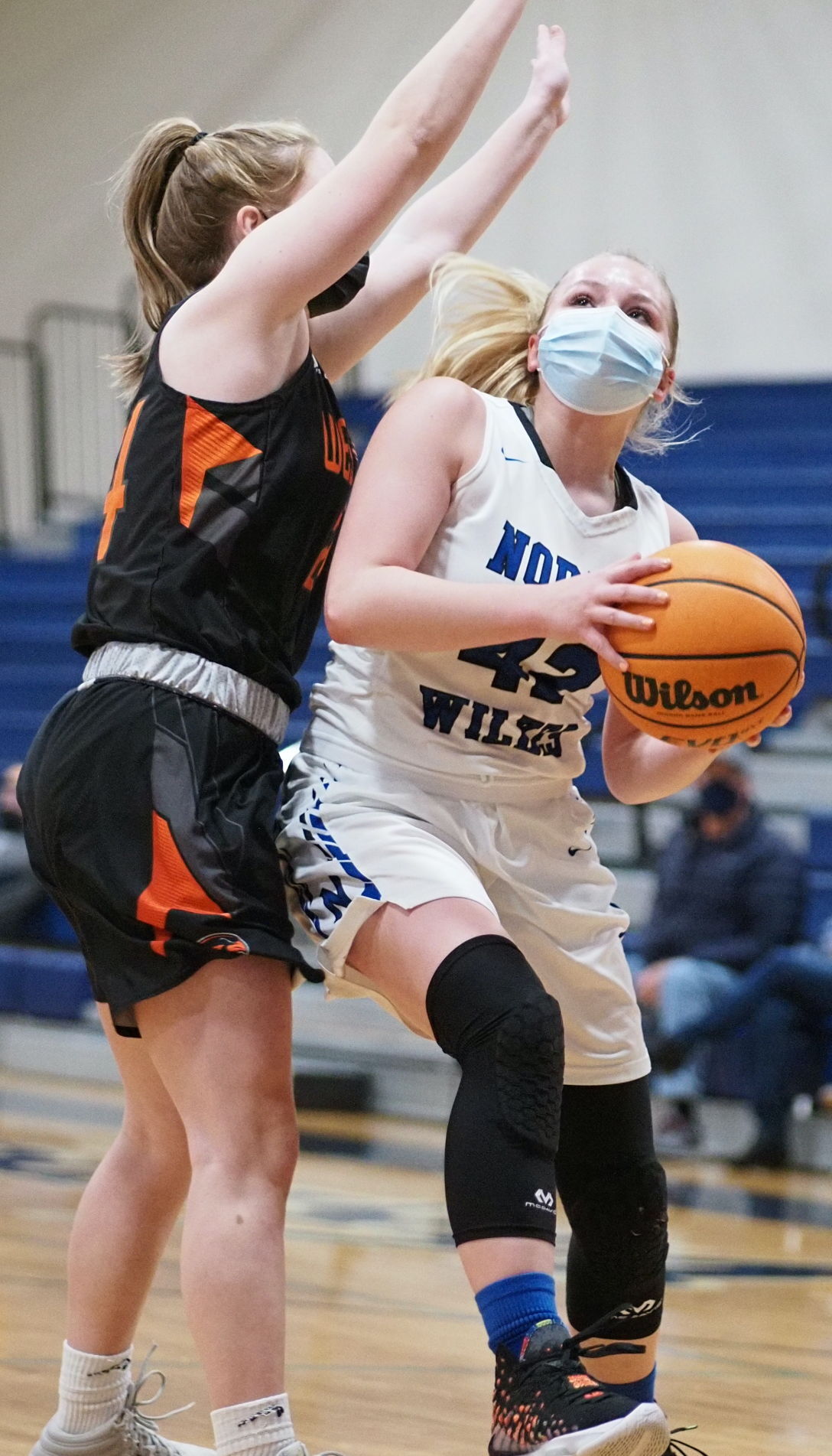 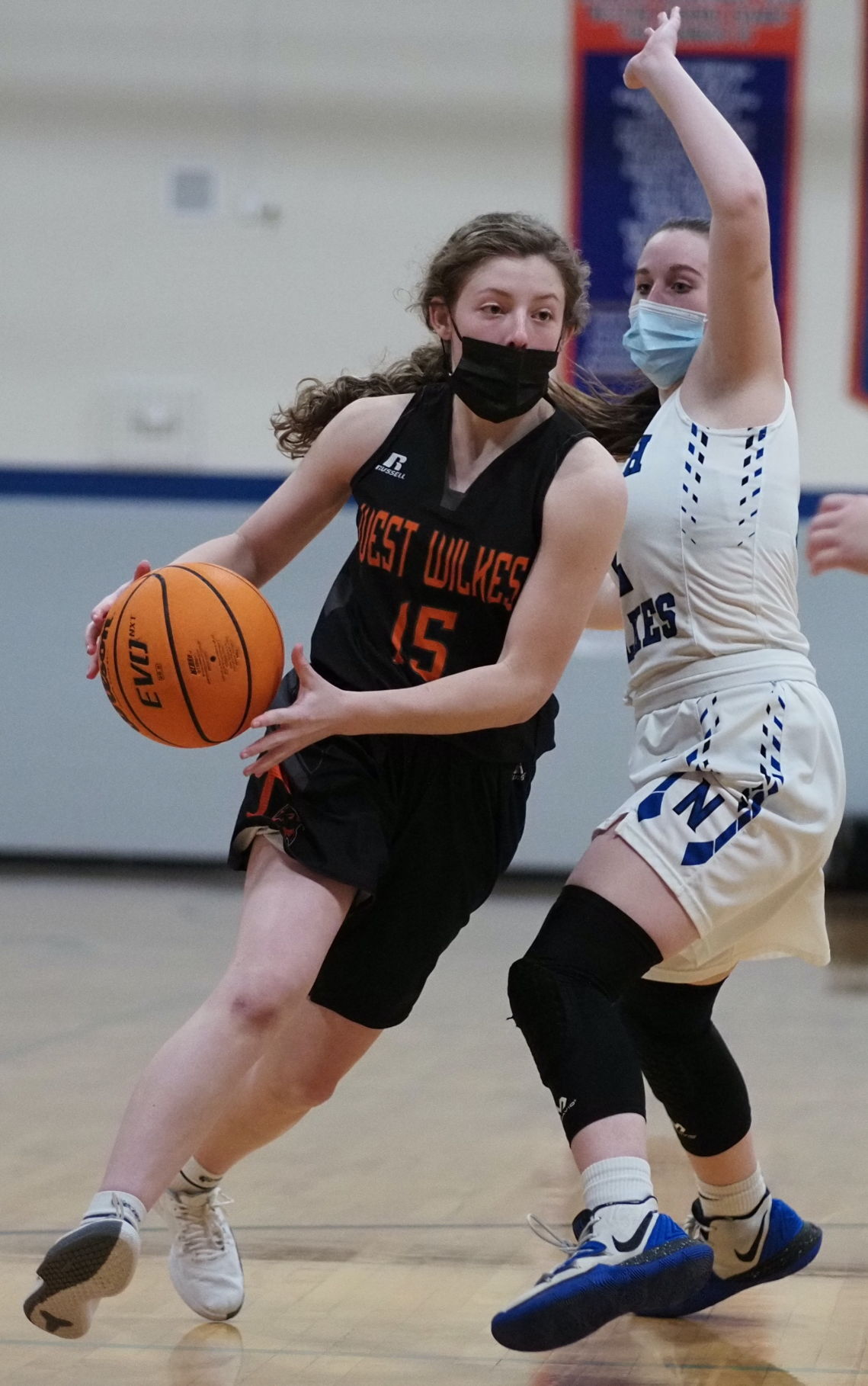 Above left: The Blackhawks’ Kendall Stanley drives past North’s Haili Shumate during West’s 46-22 win Friday. Stanley had two 3-pointers in the contest. Above right: North Wilkes senior McKenzie Johnson’s drive to the basket is contested here by West Wilkes’ Kacey Triplett. Johnson led the Vikings with 11 points in Hays. 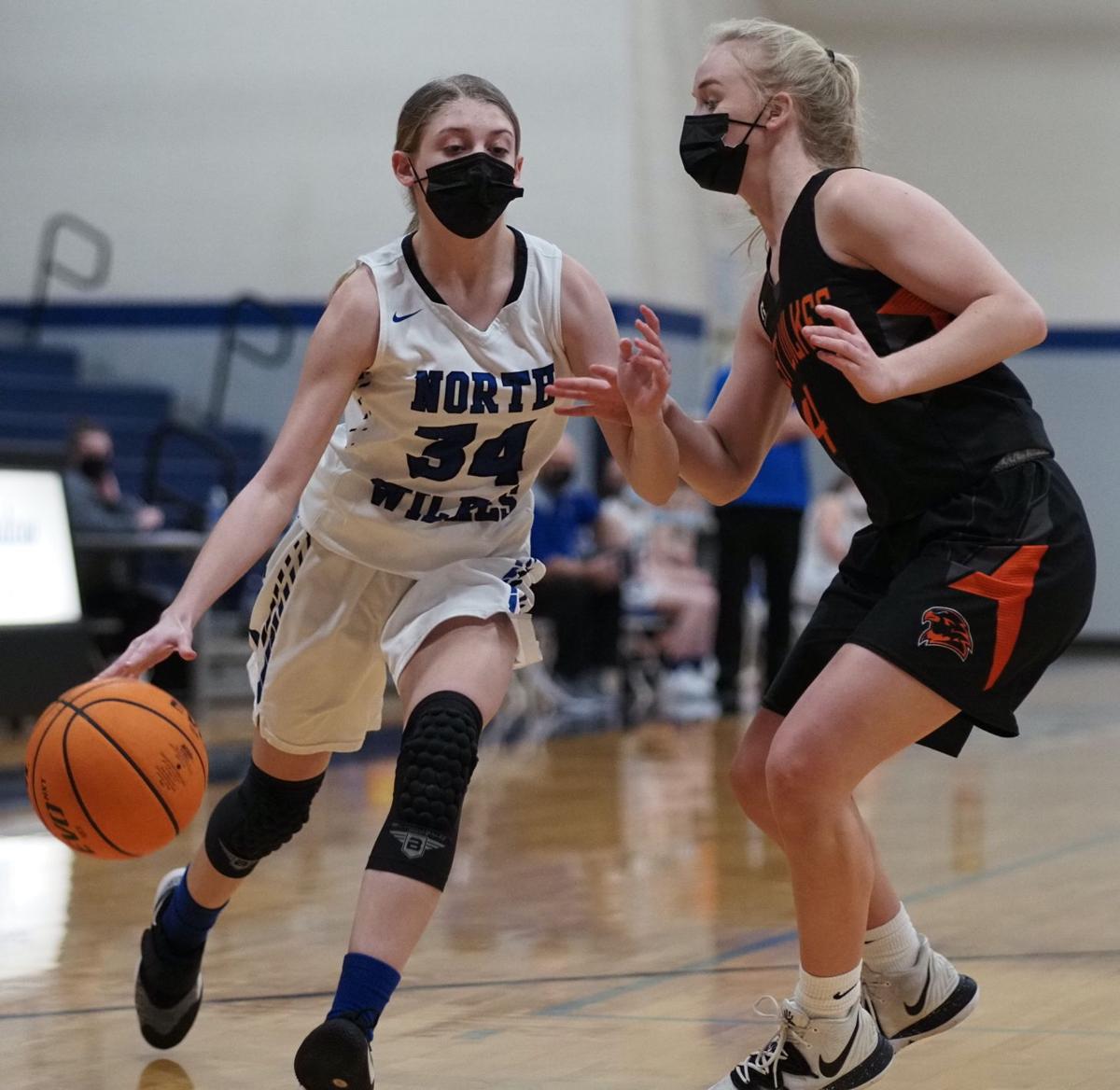 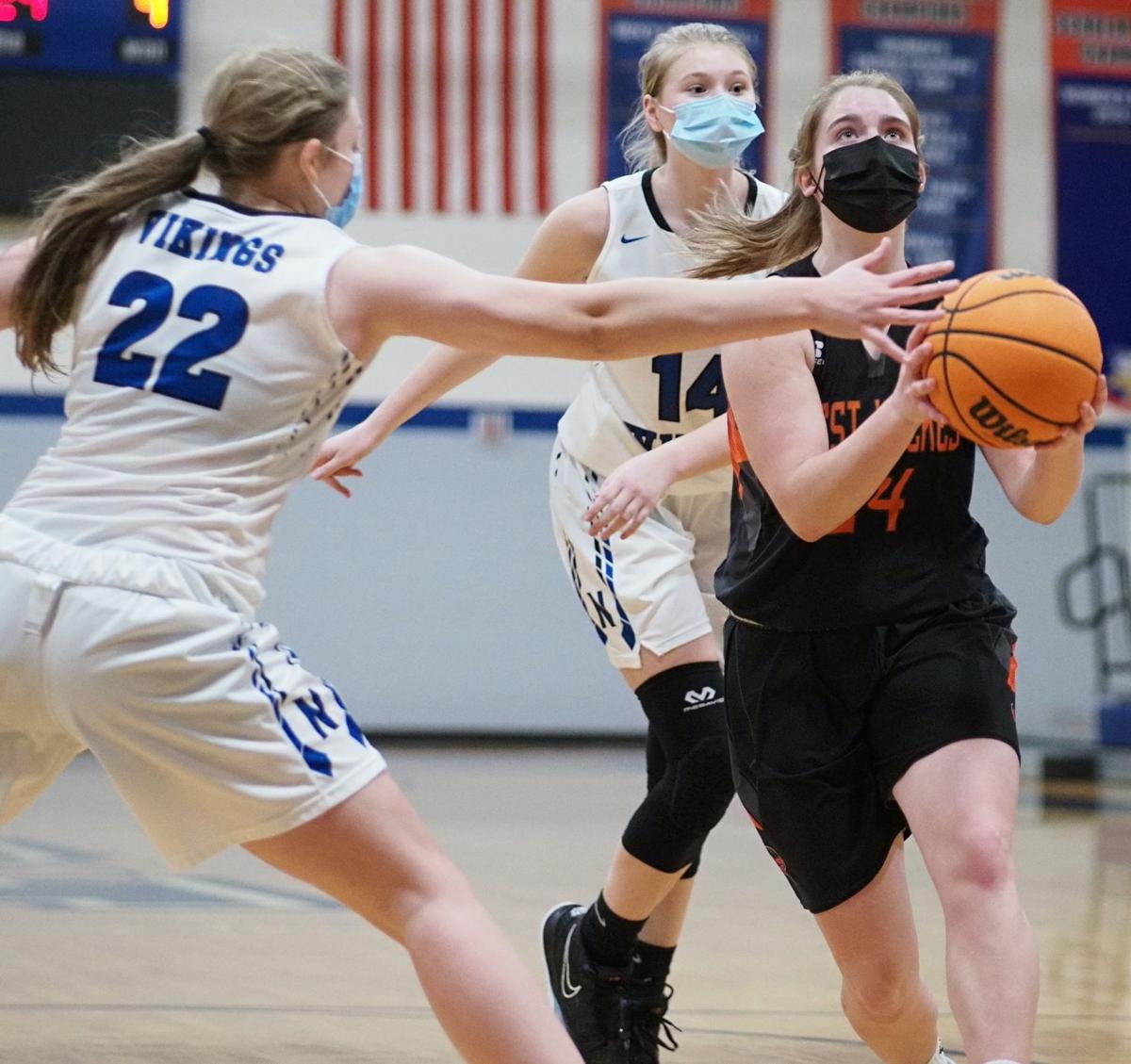 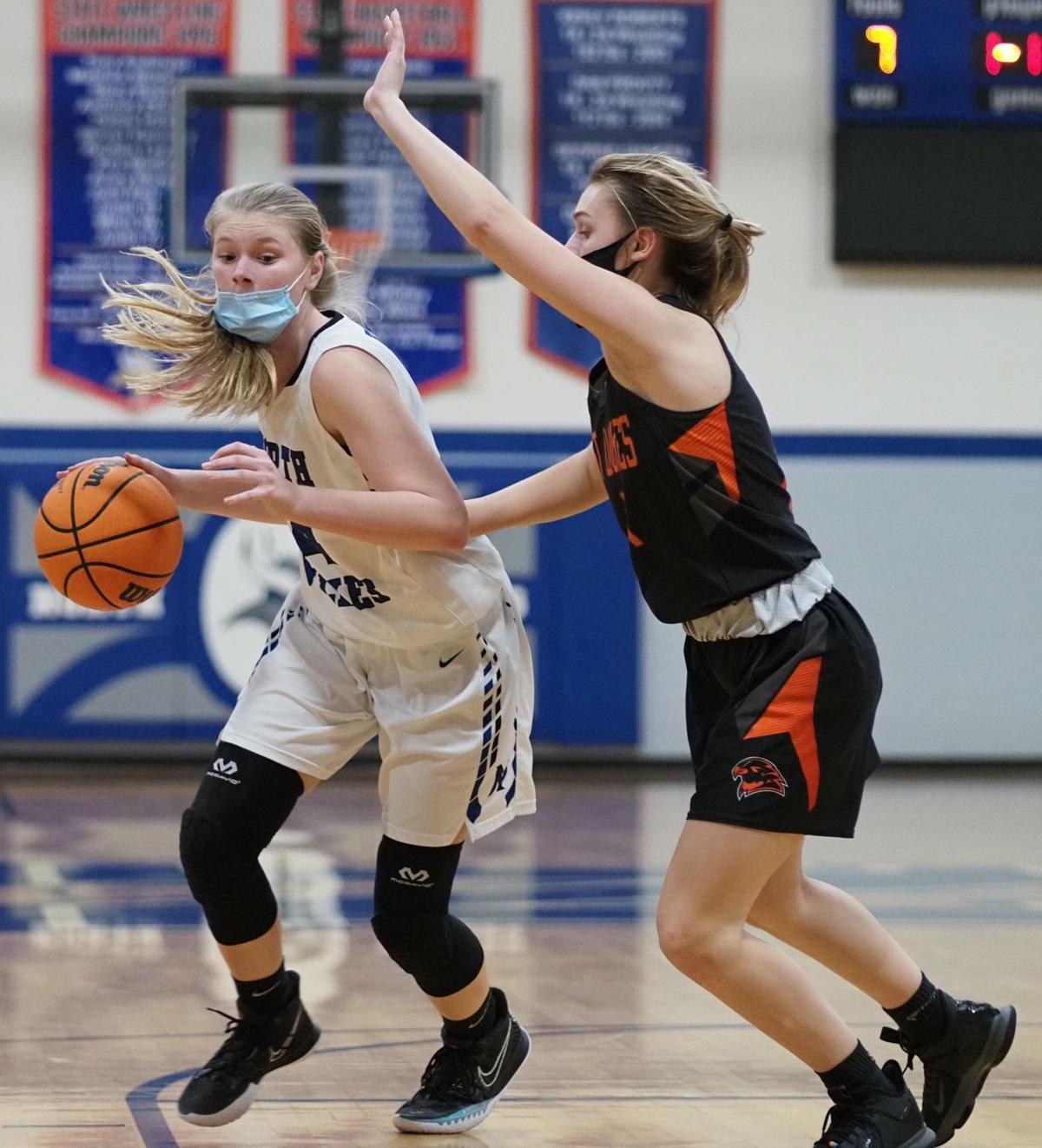 Zoie Wells of North Wilkes dribbles into the lane Friday as West Wilkes’ Parker Childress keeps step during West’s 46-22 win in Hays. Childress had a season-high 17 points in the victory.

Above left: The Blackhawks’ Kendall Stanley drives past North’s Haili Shumate during West’s 46-22 win Friday. Stanley had two 3-pointers in the contest. Above right: North Wilkes senior McKenzie Johnson’s drive to the basket is contested here by West Wilkes’ Kacey Triplett. Johnson led the Vikings with 11 points in Hays.

Zoie Wells of North Wilkes dribbles into the lane Friday as West Wilkes’ Parker Childress keeps step during West’s 46-22 win in Hays. Childress had a season-high 17 points in the victory.

The undefeated Blackhawks are 10-0, and, even if upset Thursday in Millers Creek by Ashe County, would finish with a better winning percentage (.909) than Wilkes Central, who can finish 11-2 (.846) if they beat Ashe County and Elkin this week.

“I have a group of special girls,” said West Coach Allie Greene. “They are so special on and off the court. I can’t say enough good things about them.”

West shared a league crown in 2018-19 with Wilkes Central. Both teams finished 11-3 that year in the Mountain Valley 1A/2A Athletic Conference and split their season series.

“I thought we played well Friday, and everyone got some minutes, including some that we have pulled up from JV,” said Greene. “(Leading scorer) Carson (Ledford) didn’t play due to resting a sore knee but I think others stepped up to the challenge.”

On Friday, West got a long-range boost from reserve sophomore guard Parker Childress, who scored a season-high 17 points, which included five 3-pointers.

“Parker was on fire shooting and was a great spark offensively,” noted Greene.

Childress singlehandedly fueled an 11-0 run over a three-minute period that bridged the first and second quarters which turned a five-point game into a runaway.

Her first bomb came from the top of the key with 1:50 left in the first quarter and spotted West a 10-2 lead.

Childress connected again from the left wing off a feed from Jamesyn Bell with 15 seconds left in the opening period, boosting the West lead to 13-2.

She drained another trifecta just 48 seconds into the second quarter, and after her steal and layin the lead was 18-2 with 7:02 left in the first half.

West made 9-of-20 beyond the arc as a team, with four of those coming in the third quarter, which saw the West lead blossom from 12 to 20 points. North would get no closer than 20 in the final period.

“We did a good job running our offense and playing fast but patient,” said Greene. “We always want to play fast but wait on a good shot without forcing things, and our girls did that well.”

Jamilyn Wilcox chipped in with 12 points, which included an 8-for-9 effort at the free-throw line. Kendall Stanley had a pair of treys for the Blackhawks. Cheyenne Clonch pulled down nine rebounds for West.

West recorded 22 steals and 11 deflections—paced by Wilcox’s five and six, respectively—and Greene noted that “our defense fuels our offense. When we play with intensity defensively good things happen offensively as well.”

North’s McKenzie Johnson led her team with 11 points. Kate Brown added six for the Vikings (4-6), who were missing inside presence Shelby Roal due to quarantining. The young Viking roster was comprised of three varsity and 10 junior varsity players.

“Just playing a game this season is a win but when we turn that win into a win on the scoreboard, especially going into a tough place to play like North, it’s an even better win,” added Greene.

West has taken five of the last six contests with North.

Host Elkin outscored East Wilkes in every quarter of a 43-25 victory Monday.

Madison Mauldin, Chandler Beals and Selena Islas each added six points for Elkin, which improved to 6-4 with its fifth-straight victory and clinched the MVAC’s 1A playoff berth.

East slipped to 4-7 and is out of playoff contention.

Wilkes Central blitzed Starmount in Boonville on Friday, 62-28. It was the Eagles’ 25th straight victory over the Rams.

“This was a total team effort,” said Central Coach Greg Davenport. “Everyone on the team scored.”

Zoe Susi led the Eagles with 20 points—including a trio of 3-pointers—and three assists. She was selected as Davenport’s player of the game.

The 9-2 Eagles close out the regular season Tuesday at Ashe County and Thursday by hosting Elkin. “We’re going to try to win out and secure a wild card playoff spot,” added Davenport.

The Blackhawks remained unbeaten at 9-0 while the Rams slipped to 1-8.

“We started a little slow” and was tied 13-all after the first quarter, explained West Coach Allie Greene. “We missed some easy shots early on but we finally got some rhythm going.” West took control by outscoring the visitors 22-5 in the second period.

The game being moved forward a day “may have thrown us off a little,” said Greene. “We lacked some intensity on defense. In a season as uncertain as this we have to be able to roll with the changes and I think until last night we’ve done a good job with that.”

Jamilyn Wilcox paced West with 14 points and “took the ball to the hole and finished well.” Parker Childress had nine points and “hit some big shots to help get us going offensively.” Jamesyn Bell also chipped in with nine points.

“As I say every game, just getting to play a game is a win but it’s great when you turn that win into a win on the scoreboard, too,” added Greene.

Audrey Jennings poured in 36 points for Elkin. She also led the victors with nine rebounds and 10 steals.

But then Ashe scored the game’s final eight points, six coming on a jumper and four free throws by Paige Overcash.

Ashe evened its record to 5-5 while East saw its mark reduced to 4-6.

Some clouds in the morning will give way to mainly sunny skies for the afternoon. High around 55F. Winds NW at 5 to 10 mph.

Partly cloudy in the evening with more clouds for later at night. Low around 45F. Winds SSW at 5 to 10 mph.