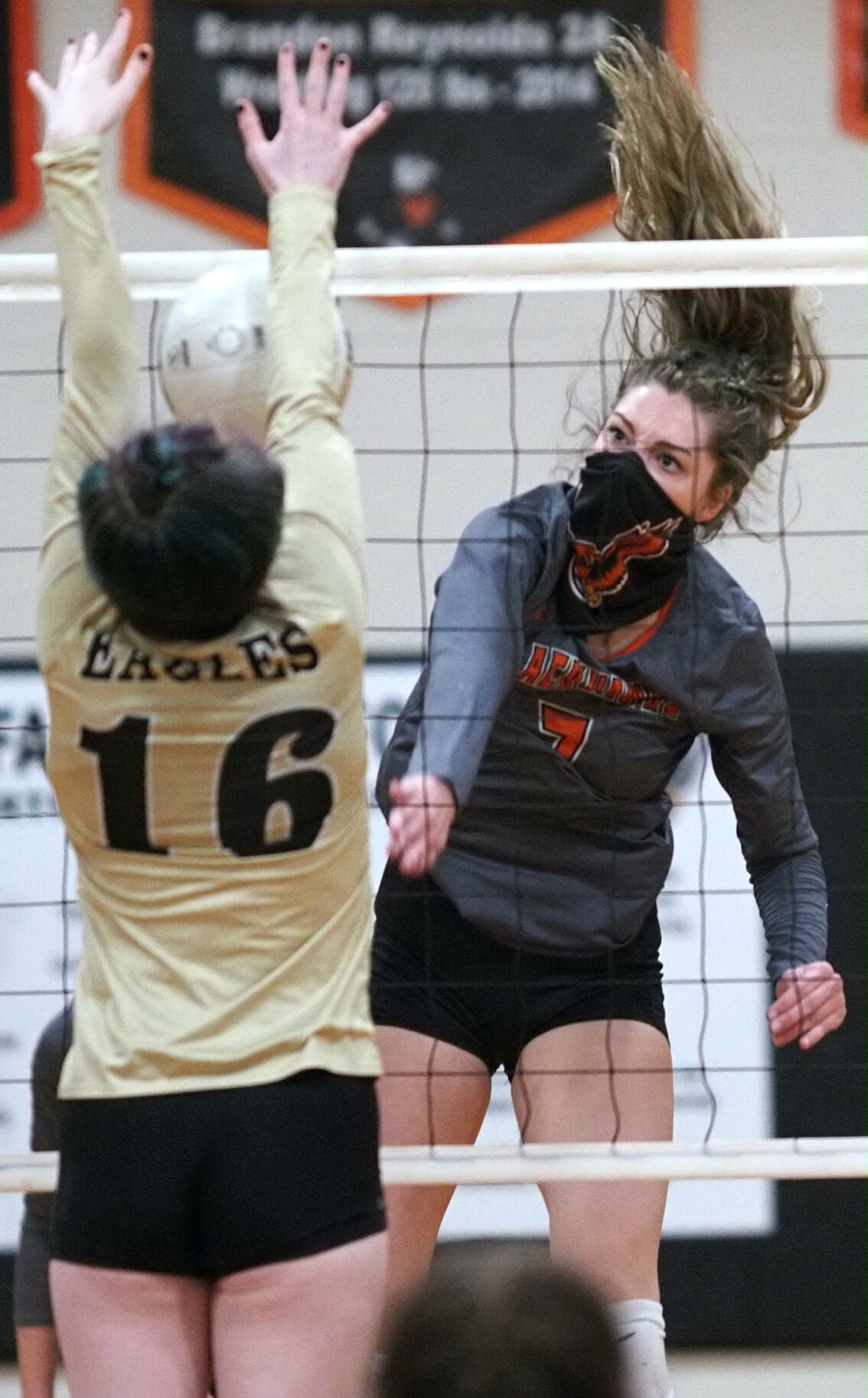 West's Carson Ledford hammers home one of her 20 kills Thursday in Millers Creek. Surry Central's Jordan Westmoreland attempts a block on the play. 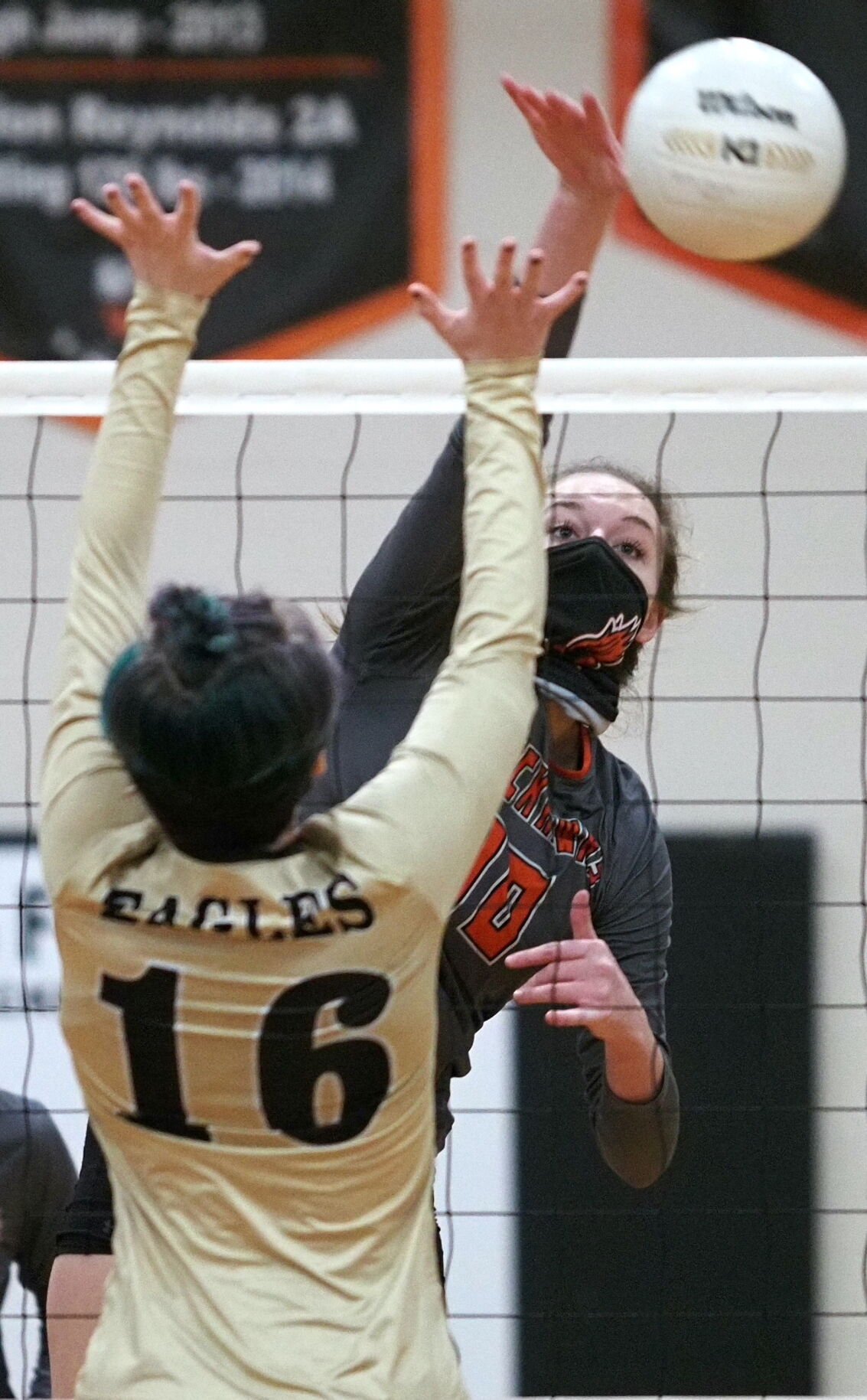 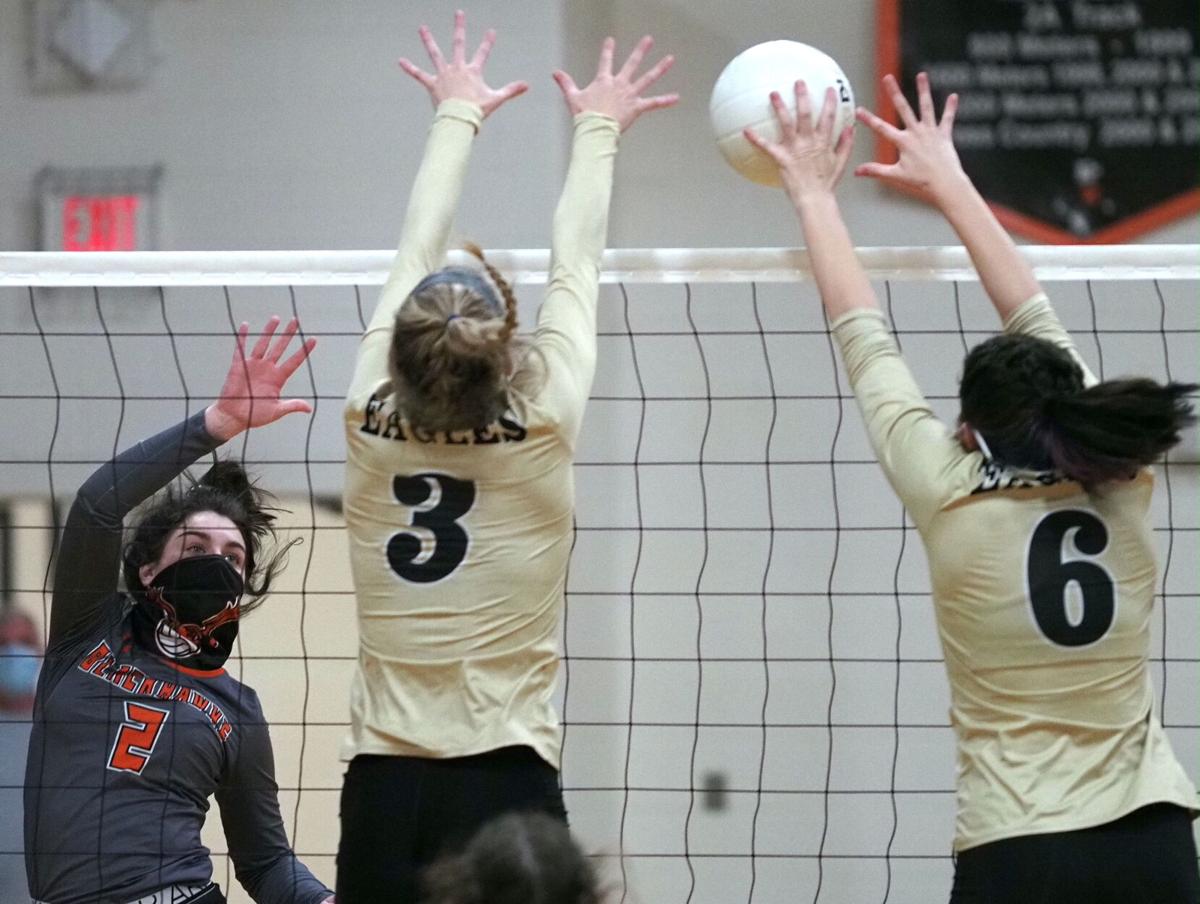 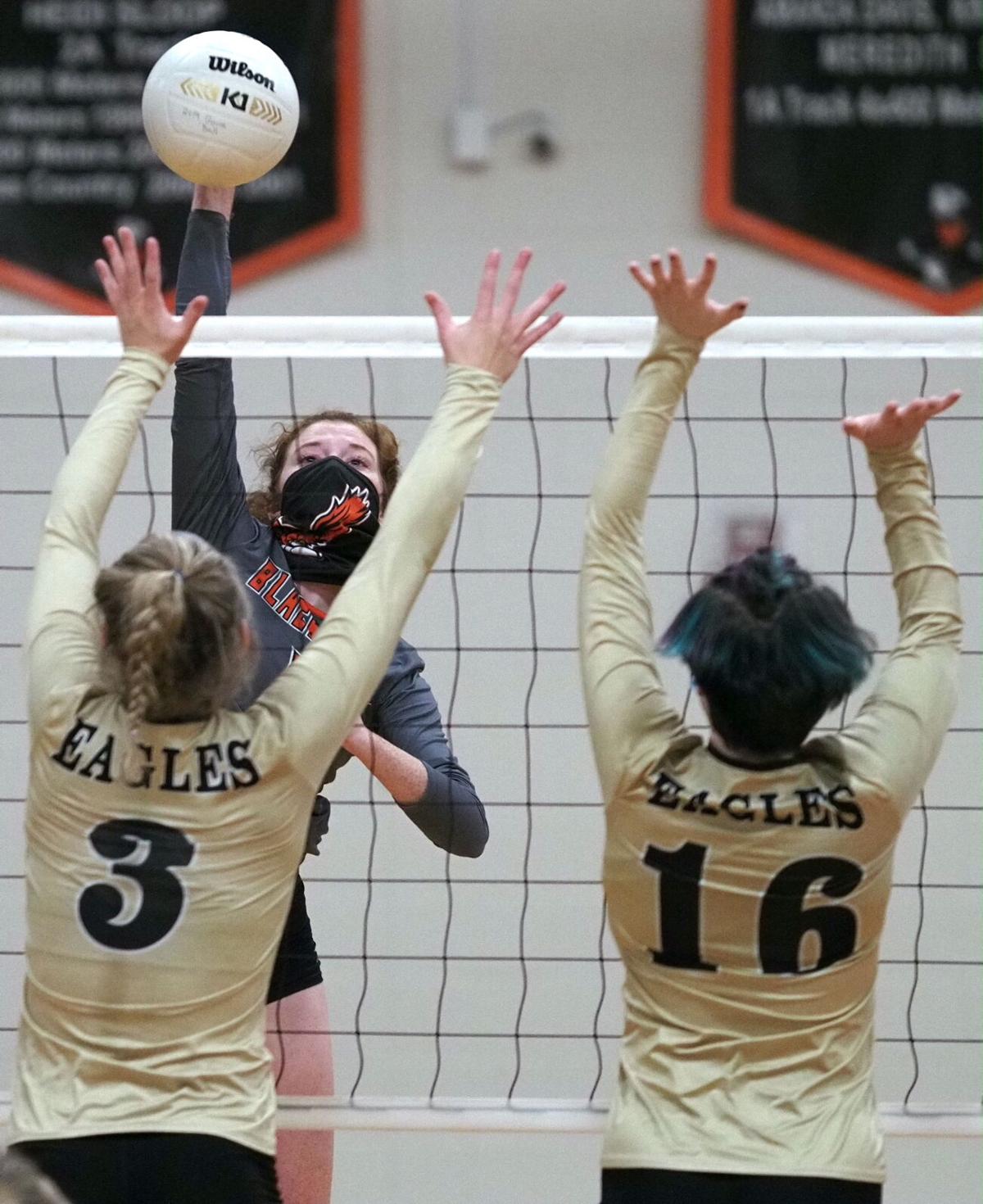 West Wilkes' Gracie Lambert spikes home a winner in her club's second round playoff win Thursday. Defending at the net are Mia McMillen (3) and Jordan Westmoreland.

West's Carson Ledford hammers home one of her 20 kills Thursday in Millers Creek. Surry Central's Jordan Westmoreland attempts a block on the play.

West Wilkes' Gracie Lambert spikes home a winner in her club's second round playoff win Thursday. Defending at the net are Mia McMillen (3) and Jordan Westmoreland.

The volleyball teams, the court and the stakes were the same as a year ago.

But the outcome was dramatically different for West Wilkes on Thursday.

The Blackhawks advanced to the third round of the 2A state playoffs for only the third time in school history, avenging a stinging five-set loss to Surry Central in last year’s second round.

West prevailed in three sets in Millers Creek, 25-18, 25-13 and 25-12, to advance to the regional semifinals Saturday at West Stanly in Oakboro, an eastern suburb of Charlotte. The game—the start time of which had not been announced as of noon Friday—will be broadcast over the NFHS network.

“It was a great win,” said West Coach Steve Bryan. “The entire team played well. Defensively, we were everywhere. All the girls contributed greatly.”

The third-seeded Blackhawks improve to 16-0 on the season, while the campaign of Surry Central, the 11th seed, ends at 12-4.

“Carson was on fire offensively, as was Cheyenne defensively,” noted Bryan. “Katie’s (Nichols) serving was fantastic as well.”

In the first set, an ace by Surry’s Mia McMillen gave her club a 12-11 lead and prompted a Blackhawk timeout. But West responded with a Clonch ace, a block by Sydney Sheets and a kill by Ledford.

After Katie Nichols’ serve was returned out of bounds, West led 22-17 and the Golden Eagles called a timeout. Clonch responded with a pair of kills, and a Surry hitting error closed out the first set.

The second set was also tied at 12-all before West took control with Jamesyn Bell in service. A thundering kill by Ledford, a hitting error by the visitors, a block by Ledford, a Bell tip-over, another booming spike by Ledford and a Gracie Lambert kill prompted another timeout by Coach Carrie Bruce.

Then a push-over by Lambert and a pair of Surry attack errors completed the 9-0 run that put West in the driver’s seat. The hosts closed out the set with back-to-back Ledford aces.

West took control of the third set early, racing out to a 7-1 lead with a run that featured two blocks by Ledford, kills by Clonch and Ledford and an ace by Ledford.

Surry pulled to within 8-6 before five unanswered points—via a block and kill by Clonch, a Nichols ace and a Ledford kill—forced another timeout by the visitors.

The Blackhawks closed out the match with five straight points, highlighted by back-to-back aces by Bell, an authoritative kill by Clonch (her ninth of the match) and a game-ending net smash by Ledford.

In the second round of the 2019 playoffs, the Golden Eagles took a five-set thriller in Millers Creek, West’s only blemish in a 20-1 season.

West has never won three playoff matches in a single season. The club advanced to the 1A West Region finals at Rosman in 2010 by winning its first two matches under second-year coach Bryan. There were only eight teams in the 1A West playoffs that year, compared to 16 in the 2A West this year.

Second-seeded West Stanly is 13-0 and champions of the Rocky River 2A Conference. Saturday’s matchup will be the first all-time between the two schools.

“This is exciting times for West Wilkes volleyball,” said Bryan.

Considerable cloudiness. Low near 35F. Winds NNW at 5 to 10 mph.

Showers early becoming a steady rain late. Low 37F. Winds light and variable. Chance of rain 70%. Rainfall near a quarter of an inch.