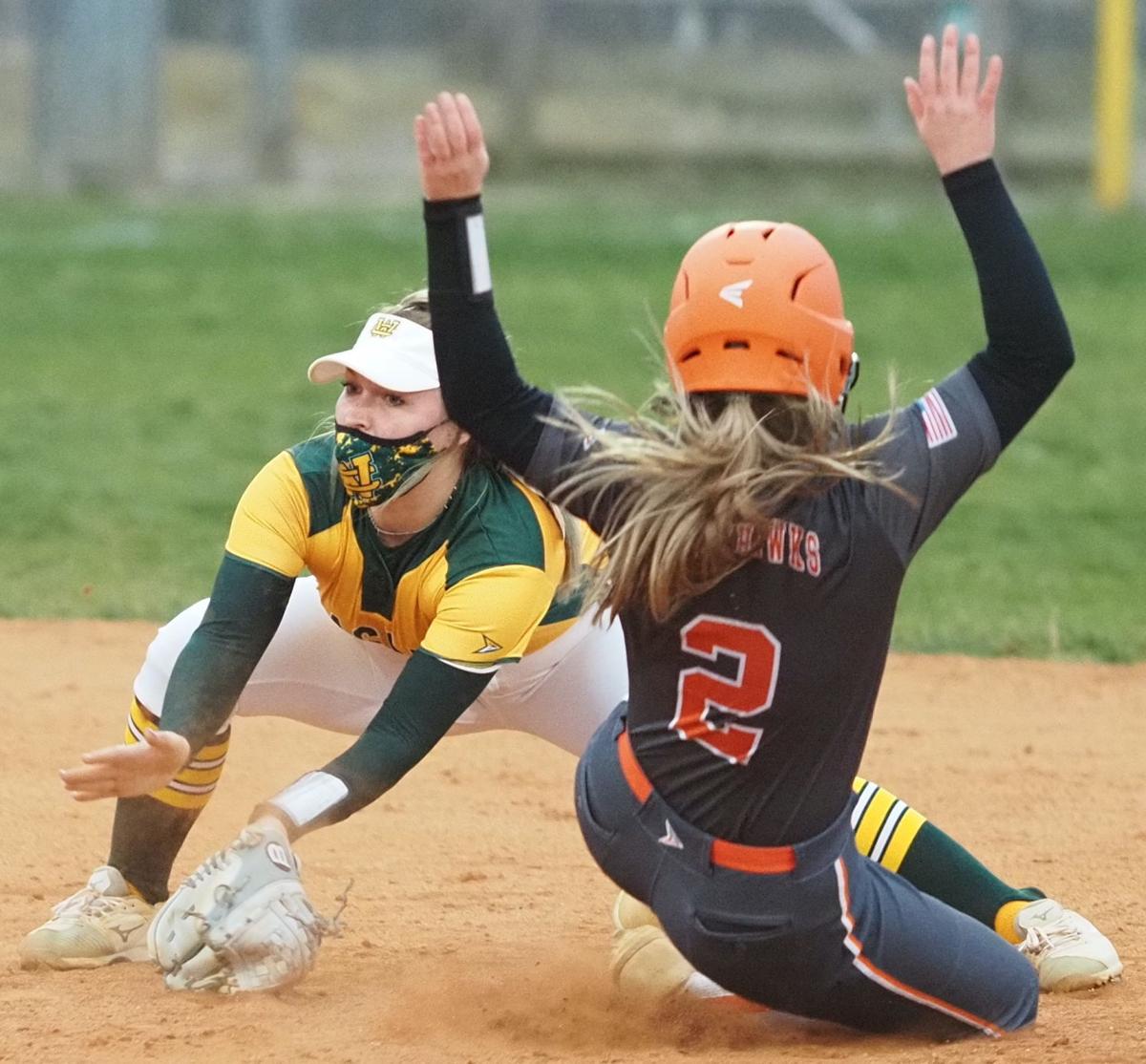 West’s Kacey Triplett slides safely into second base as Central’s Christa Walsh readies herself for the arrival of the ball. Triplett had just driven in a run with a bunt single and took second following the play at the plate. 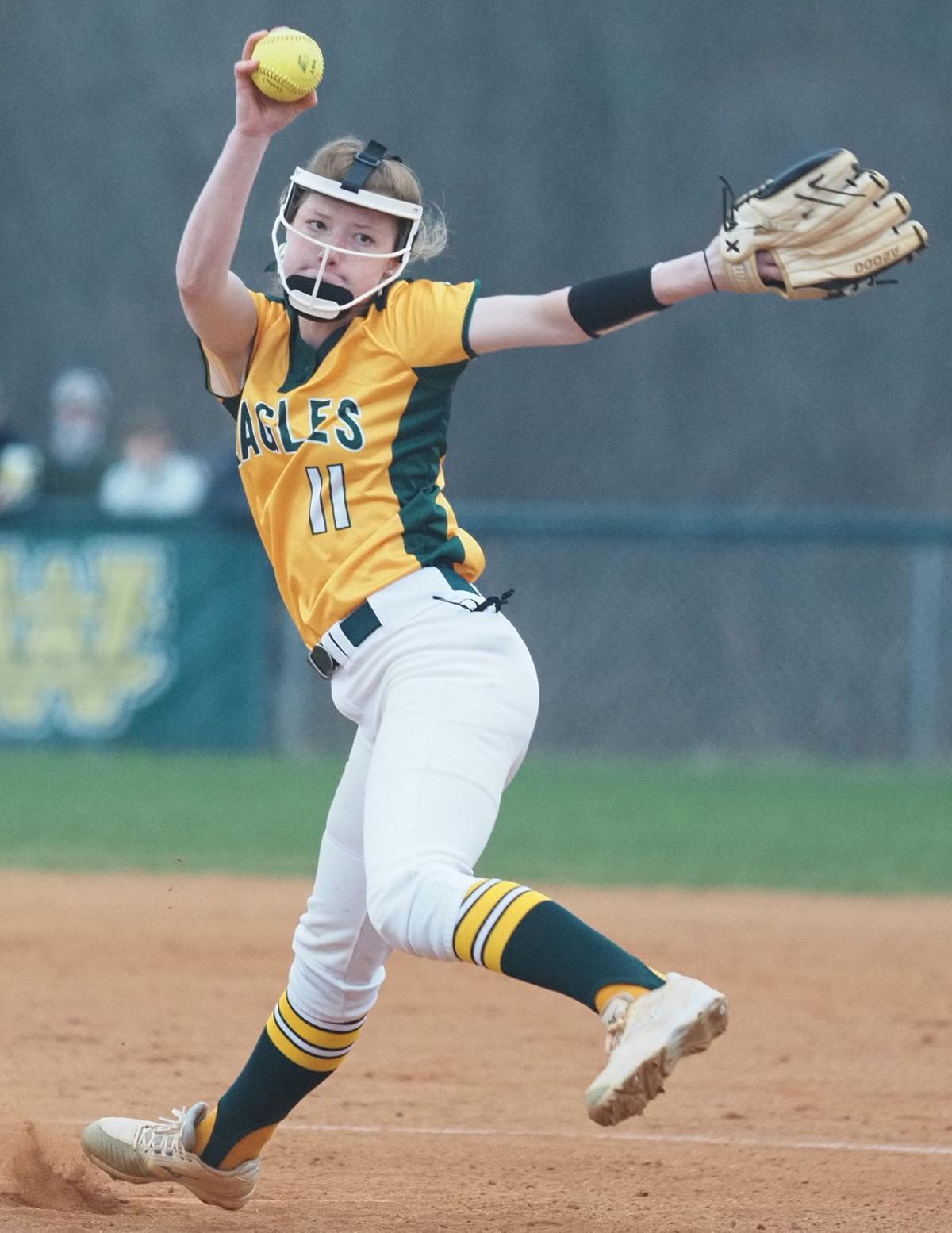 Junior Isabelle Curry got the complete-game win on the mound and stole two bases in a 7-1 win against Alleghany on March 24.

Photos by Marty McGee
1 of 2

West’s Kacey Triplett slides safely into second base as Central’s Christa Walsh readies herself for the arrival of the ball. Triplett had just driven in a run with a bunt single and took second following the play at the plate.

Junior Isabelle Curry got the complete-game win on the mound and stole two bases in a 7-1 win against Alleghany on March 24.

The Blackhawks scored twice in the second inning, just enough support for freshman pitcher Lily Proffit, who allowed a single earned run in the sixth inning and helped her own cause with her bat in the second.

In the second, Proffit led off with a double down the right field line. Pinch runner Kylee Martin, a freshman, then stole third base and scored after junior Kacey Triplett laid down a bunt single.

After Triplett beat the throw to first, Martin broke for home and slid in safely, eluding the tag of Eagle catcher Saleen Miller. Triplett then alertly raced to second, also barely beating the throw from Miller.

West senior Lizzie Church then delivered an RBI bloop single to right field, plating Triplett and giving Proffit all the runs she would need. Church was 2-for-2 at the plate.

“It was great timely hitting and execution that scored our two runs,” noted Michael Woodruff, the West coach.

Proffit (2-0) went the distance on the mound, striking out 15 and walking two batters. “Lily pitched great at Wilkes Central and was basically lights out against Starmount (in a one-hit shutout on March 24),” said Woodruff.

Central’s lone run came in the sixth, when sophomore Madison Hamby drove in junior Katie Nichols with an RBI single. Nichols had reached base with a walk.

Junior Isabelle Curry had Central’s other hit. On the mound, Curry (2-1) allowed four hits and two earned runs while striking out four.

“Overall I am so proud of my team,” said Central’s coach, Colby Shell. “Our defense was solid and we really backed up Isabella the entire game. The better the defense played, the better she pitched.”

West improved to 3-0 and is tied with Alleghany for the lead in the MVAC. The Blackhawks, the top-ranked 2A team in the state according to MaxPreps, are riding a 12-game MVAC winning streak dating back to 2019.

“West had to scrap for their runs and we had to scrap for ours,” said Shell, whose club slipped to 2-1. “We had a couple chances to tie it or even take the lead but it just didn’t go our way. Gotta trip your cap and get back to work. I think we proved a lot as a team to go 2-1 against a top team in the state.”

East Wilkes posted its first win of the season at Ashe County, 19-3, on March 24.

“We were very focused on the task at hand,” said Derrick Hill, the Cardinal coach. “Our defense was flawless and our pitchers threw strikes. We probably had 20 hits in the four innings. It’s about time our offense came alive. We are going to have to score several runs in our games to be successful.”

The game in West Jefferson was shortened to four innings due to the MVAC’s 10-run rule.

The Cardinals improved to 1-3, the same mark as the Huskies.

Wilkes Central handed Alleghany its first loss of the season on March 24.

The Eagles won in Moravian Falls, 7-1, buoyed by a five-run sixth inning. The win boosted Central (3-1) into a second-place tie with the Trojans.

“We simply came to play again,” said Colby Shell, the Eagle coach. “The defense was solid from the start. Our ladies are really settling in nicely and showing everyone how talented they are. We are eager to see what happens moving forward.”

Senior Christa Walsh went 2-for-3 with a double at the plate, scored twice and drove in two runs. “Christa got the scoring party started with a clutch single to drive in the game’s first run” in the fourth, said Shell. Walsh then scored on a Sydney Ferguson single.

Senior Drema Vickers had two RBIs in the sixth, while Saleen Miller and Karlie Anderson drove in single runs. “In the sixth, we did what we always do—score late runs,” noted Shell.

Junior Isabelle Curry stole two bases and got the complete-game win (3-1) on the mound, allowing four hits and a single earned run while walking none and striking out 12. “Isabelle came out firing again,” added Shell.

Lily Proffit (3-0) hurled a one-hit shutout for the Blackhawks. The freshman walked three and struck out nine batters.

Jayla Fisher went 2-for-3 at the plate, including a double. Plating runs for the victors were Sophie Nichols (on a sacrifice fly), Carly Parsons (on a triple), Lizzie Church and Paige Phillips.

“I was proud of the girls at the plate,” said West Coach Michael Woodruff. “We were patient yet aggressive at the plate and it paid off in the middle innings.”

The hosts were nursing a 1-0 lead before erupting for three runs in the fourth.

Starmount’s Summer Fontana allowed six hits and a single earned run in a complete-game losing cause.

The Blackhawks remained unbeaten at 4-0 while the Rams stumbled to 2-2.

Ashe County posted its first win of the season on March 23, a 12-2 decision in West Jefferson over North Wilkes.

The Vikings (0-3) scored single runs in the fifth and sixth innings. Freshman Jackie Morgan hit a triple with two outs in the fifth inning and later scored on a passed ball.

With two outs in the sixth, Riley Berrier scored from third after the Ashe catcher tried to throw out a Viking baserunner at second base.

The Huskies improved to 1-2 while the Vikings faltered to 0-3. “Overall we are working to improve each game and get better every day this season,” said North Coach Noah Johnson.

Starmount coasted past East Wilkes in Ronda on March 23, 15-0.

Ram junior Summer Fontana allowed no hits in the game, which was shortened to three innings due to the 10-run rule.

Starmount bettered to 2-1 while East slipped to 0-3.

Elkin scored six times in the second and five in the third to open up a double-digit lead.

The Buckin’ Elks evened their mark at 2-2 while the Vikings fell to 0-4.

Partial cloudiness early, with scattered showers and thunderstorms in the afternoon. High near 85F. Winds light and variable. Chance of rain 50%.

A few clouds from time to time. Low 68F. Winds light and variable.