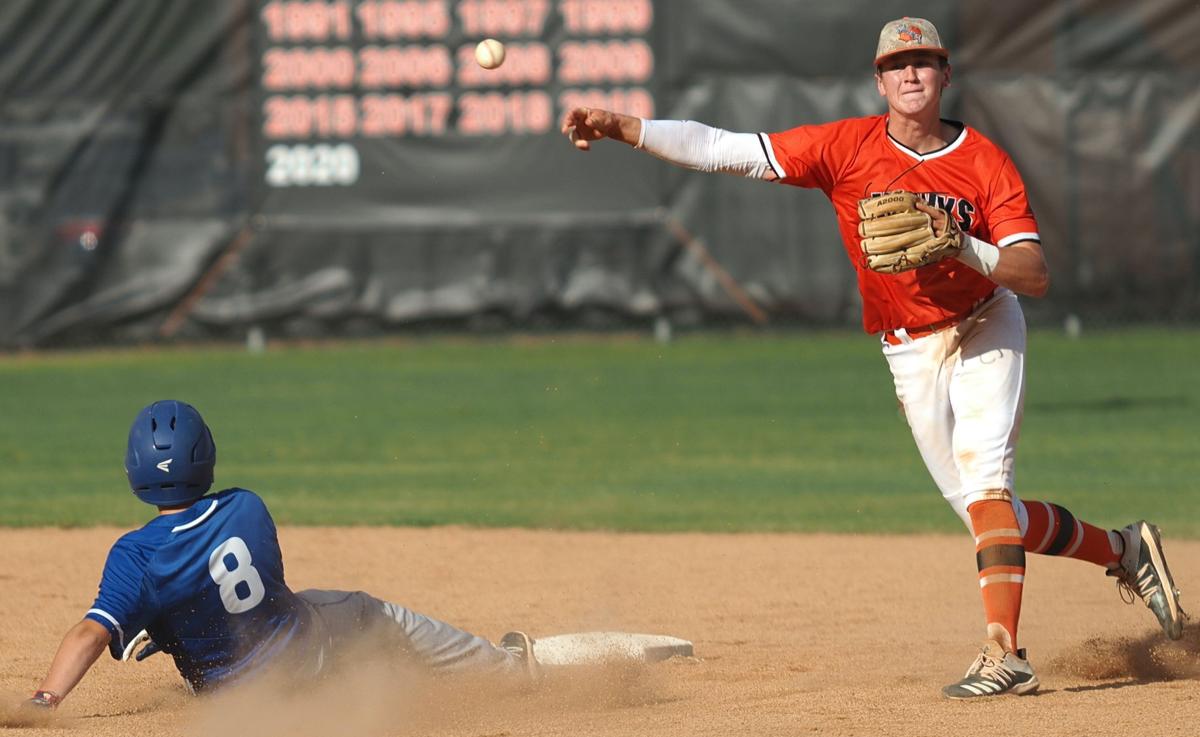 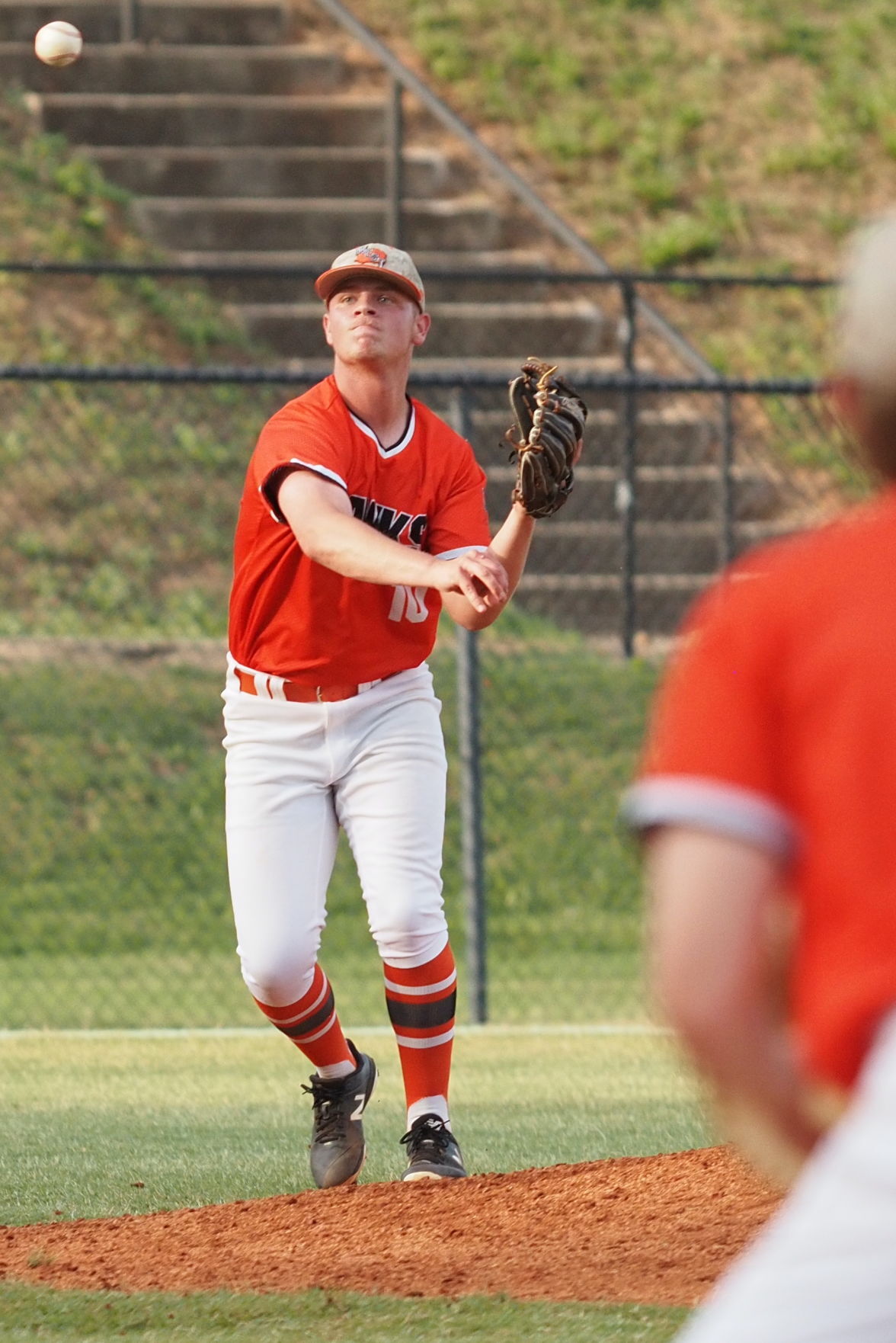 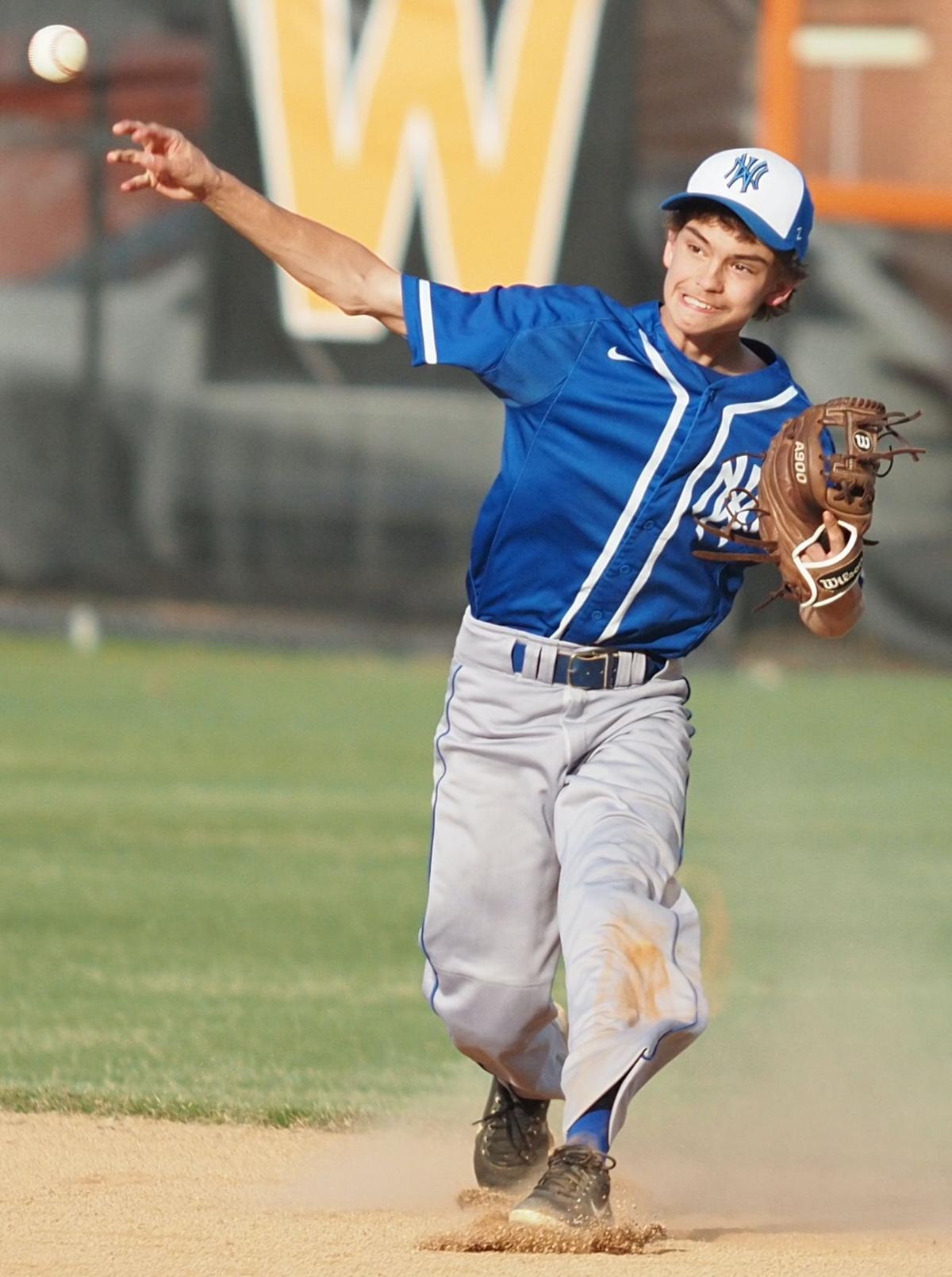 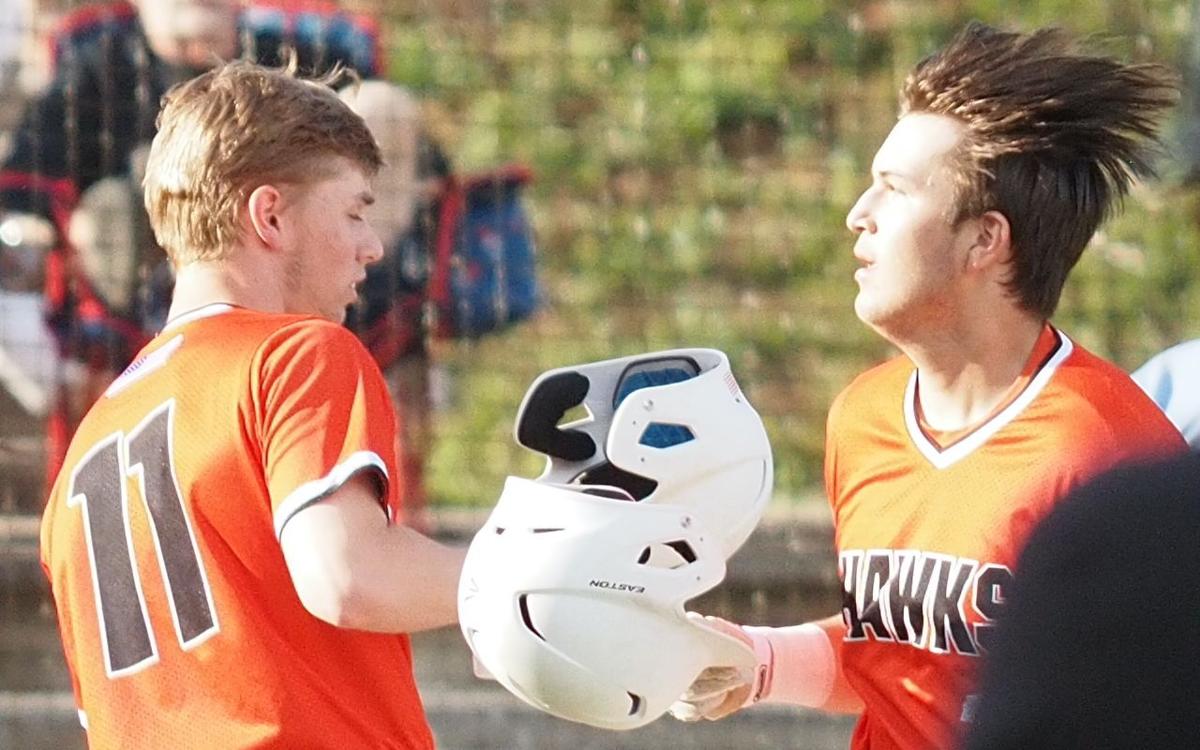 West Wilkes’ A.J. Roten (right) taps batting helmets with teammate Izaac McGuire after cracking a leadoff homer in the second inning, the spark of a nine-run outburst that led to West’s 13-1 victory Friday in Millers Creek.

West Wilkes’ A.J. Roten (right) taps batting helmets with teammate Izaac McGuire after cracking a leadoff homer in the second inning, the spark of a nine-run outburst that led to West’s 13-1 victory Friday in Millers Creek.

West Wilkes found itself in an unusual position Friday: actually behind in a 2021 varsity baseball game.

But, just as they did against Ashe County on May 18—the only other time West has trailed 1-0 this season—the Blackhawks wasted no time putting North Wilkes in the rear view.

West erupted for nine runs in the bottom of the second en route to a 13-1 victory over the Vikings in a mercy-rule-shortened five innings.

In the West second, A.J. Roten led off with a home run to deep center field. On the very next pitch, Izaac McGuire grounded right up the middle for a single then took second on a balk by North starter Jesse Farrington.

Bo Nichols then doubled to right center, plating McGuire. Collin McGuire next lofted a long flyball to right that was tracked down but not caught near the warning track. Nichols was tagged out with ease on the throw to the plate.

Ben Huffman then hit a hard groundball to second that was too hot to handle, scoring Collin McGuire for a 3-1 West lead. Braxton Church then drew a walk from Farrington.

A wild pitch moved Huffman and Church to scoring position, and an intentional walk to Carson Edmiston loaded the bases. Evan Johnson then delivered a long drive to right center that dropped and scored Huffman, making it 4-1.

Mastin next drilled a line drive right at Farrington, who got his glove and left arm on it and redirected it to left field, scoring courtesy runner Hudson Severt and Edmiston for a 6-1 West lead.

Farrington was shaken up and had to leave the mound in favor of Noah Royall. After a double steal, Roten lifted a sacrifice fly to right to plate Johnson.

Izaac McGuire’s grounder to second was fielded, but the errant throw to first was wide, allowing courtesy runner Avery Aiken to score. McGuire then stole second, took third on the high throw from home, and scored on a wild pitch to make it 9-1.

The Blackhawks put it away with two runs apiece in the third and fourth. In the third, Collin McGuire led off with a double to the wall in left center. One out later, Church lifted a ball that North center fielder Drew Winkler got his glove on, but the ball popped out and over the fence in right center for a two-run dinger.

In the West fourth, Grant Ferguson led off with a walk, and a flyout later, scored on Severt’s triple to left center. Then Jeremy Nichols singled right up the middle to plate Severt and complete the scoring.

Mastin earned the win, improving to 3-0 after allowing three hits and an earned run in four innings of mound work. He walked six and struck out three.

In his first appearance of the season, Collin McGuire retired the side in the fifth, whiffing two batters.

The Vikings slipped to 7-4 with their sixth-straight setback at the hands of the Blackhawks.

North manufactured its lone run in the top of the second. Seth Hall led off with a single down the third-base line and Anthony Welborn followed with a sharp single up the middle.

Welborn was then forced out at second on a groundball fielded by shortstop Edmiston, but the ensuing throw to first was wild, allowing Hall to score. Mastin got out of a bases-loaded jam by inducing Dalton Miller’s groundball force out.

Farrington (3-4) took the loss for the Vikings. In 11/3 innings he gave up seven hits and five earned runs while walking two. Royall, also seeing his first mound duty of the season, allowed four hits and four earned runs while also issuing a free pass.

The Blackhawks are averaging 10.9 runs per game this season while their opponents are scoring only 1.2 per contest.

Stokes struck out five batters, as did his counterpart, Central’s Weston Inscore, who worked five innings. Zach Mastin pitched the other two frames for the Eagles.

East Wilkes withstood a final-inning rally by Alleghany and posted a 10-8 win Friday in Ronda.

The Trojans touched East reliever Bryson Shore for six runs in the seventh before Hanks Porter recorded the final three outs, including one by strikeout, to earn the save.

East senior Tate Samples picked up with win, allowing six hits and one earned run in six frames while walking one and whiffing 11.

The Cardinals extended a fragile 4-2 lead with three runs apiece in the fifth and sixth innings. East plated three more runs in the first frame.

Brody Martin paced the Cardinals with a 3-for-3 effort at the plate. He also drove in a run.

Samples helped his own cause by driving in a team-high two runs. Porter, Trenton Rhodes and Brennan Arnder also collected single RBIs. Bryson Sidden’s double was the hosts’ only extra-base hit.

The Cardinals bettered to 5-7 with the win and season sweep while the Trojans faltered to 2-10.

West Wilkes took another giant step toward another MVAC title with a 12-0 shelling of Starmount in Boonville on June 1.

The Blackhawks improved to 11-0 with the season sweep of the Rams (8-2), who haven’t lost to any other MVAC club. The game was shortened to five innings due to the state’s 10-run-advantage rule.

“It definitely was a big statement win,” said Drew Ward, the Blackhawk coach. “We eliminated another team from (league title) contention and really played like we were going after a championship instead of trying to protect one. It was a great team win in a potentially hostile environment.”

Carson Edmiston threw a three-hit shutout, walking two and striking out nine. The sophomore right-hander bettered his season mark to 4-0.

“Carson threw very well and our hitters had quality at-bats throughout the order,” added Ward.

West struck fast and hard with eight runs in the top of the first, all coming with two outs. Edmiston’s three-run triple to right was the big blow, making it 8-0. Earlier in the frame, Izaac and Collin McGuire both had two-run singles and Ben Huffman added an RBI single.

In the West second, Bo Nichols singled with two outs and took second on an outfield error, which allowed A.J. Roten to score. Collin McGuire then doubled to left, plating Nichols.

Braxton Church led off the West third with a double to left. Courtesy runner Hudson Severt took third on a wild pitch and scored on Edmiston’s line-drive single to right. Edmiston had a game-high four RBIs.

In the fourth, Izaac McGuire led off with a double to left and later scored on an infield error to complete the scoring.

Wilkes Central split a pair of five-inning games at Alleghany in Sparta on June 1.

In the opener, the Trojans edged the Eagles, 5-4.

After spotting the Eagles a 2-0 lead, the Trojans plated four runs in the bottom of the first off Central starter Bryce Smithey, who took the loss.

Senior Jonah Brooks had a two-run single for the Eagles. Zach Mastin drove in a run, Brody Johnson doubled and Inscore went 2-for-2 at the plate.

In the nightcap, the Eagles snapped a five-game losing skid with a 6-5 win.

The Eagles took a 6-0 lead with five runs in the fourth inning and withstood a Trojan rally in the bottom of the frame that also produced five runs.

Brooks went the distance for the Eagles and picked up his second win of the season. He gave up five hits and two earned runs while walking three and striking out seven.

Brooks also drove in a run with a sacrifice fly. Mastin, Smithey and Eli Scott also collected RBIs while Johnson’s double was Central’s only extra-base hit.

With the split, the Eagles stand at 3-8 while the Trojans stack up at 2-9.

East Wilkes scored at least one run in all seven innings of a 9-1 victory over Ashe County in Ronda on June 1.

Sidden, also a senior, went the distance and allowed three hits and no earned runs. He walked three and struck out nine.

The Cardinals bettered to 4-7 while the Huskies faltered to 3-7.

Dalton Miller delivered the game-winning hit in the bottom of the seventh, lifting North Wilkes to an 8-7 win over Elkin in Hays on June 1.

The win was the fifth in a row for the Vikings, the program’s longest winning streak since the 2011 squad engineered four-straight victories.

“This was one of the craziest games I’ve ever been part of,” said North Coach Dwayne Berrier. “It came down to which team had a chance to make the last play and we were fortunate enough to be hitting in the bottom of the seventh.”

In the seventh, Reece Wilson and Gracen Cline drew back-to-back, one-out walks from Elkin reliever Matthew Beshears. Then, on the first pitch he saw from Beshears, Miller rapped a line-drive single to center to end the game.

Miller’s hit made a winner of Anthony Welborn, who pitched 21/3 innings in relief of Miller. Welborn allowed three hits and an earned run while walking one and striking out three.

Miller allowed four hits and two earned runs in 42/3 frames. He walked six and whiffed eight. The teams combined for 20 free passes in the game.

The Vikings erased a 5-3 deficit with four runs in the fifth. Trent Sidden led off with a walk, took third on Jesse Farrington’s single and scored on Seth Hall’s single to right. Farrington also scored on the play following an error in right.

Hall scored on a bunt that was misplayed by the Elkin catcher. Courtesy runner Justin Hayes then scored on a wild pitch, spotting North a 7-5 lead that was short-lived, as the visitors scored twice in the sixth.

“I’m very proud of how our guys kept fighting through the ups and downs that occurred during this one,” said Berrier. “Either team could’ve blew the game open at any time and won, or could’ve made the one mistake that cost it as well.”

North scored single runs in the first three frames, after RBI singles from Welborn and Sidden and Hall’s steal of home in the third.

The Vikings improved to 7-4 in the MVAC while the Buckin’ Elks regressed to 5-6.

“Elkin is very well coached (by Bobby Smith) and he and I have similar styles so it made for a heck of a game to be watching,” added Berrier. “I’m very proud of our guys.”