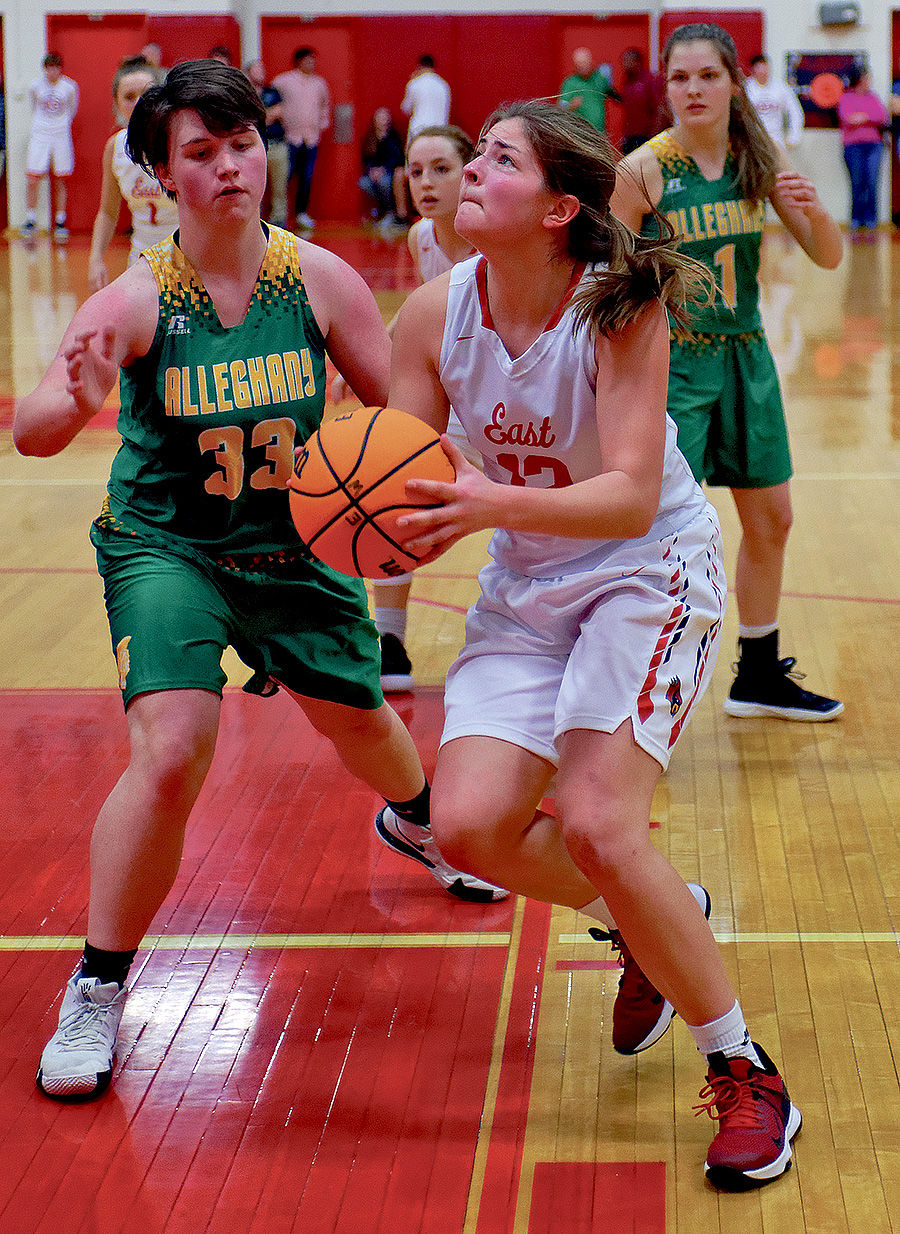 EAST WILKES’ Kaleigh Couch drives to the basket against Alleghany’s Jennifer Miles in the fourth quarter. 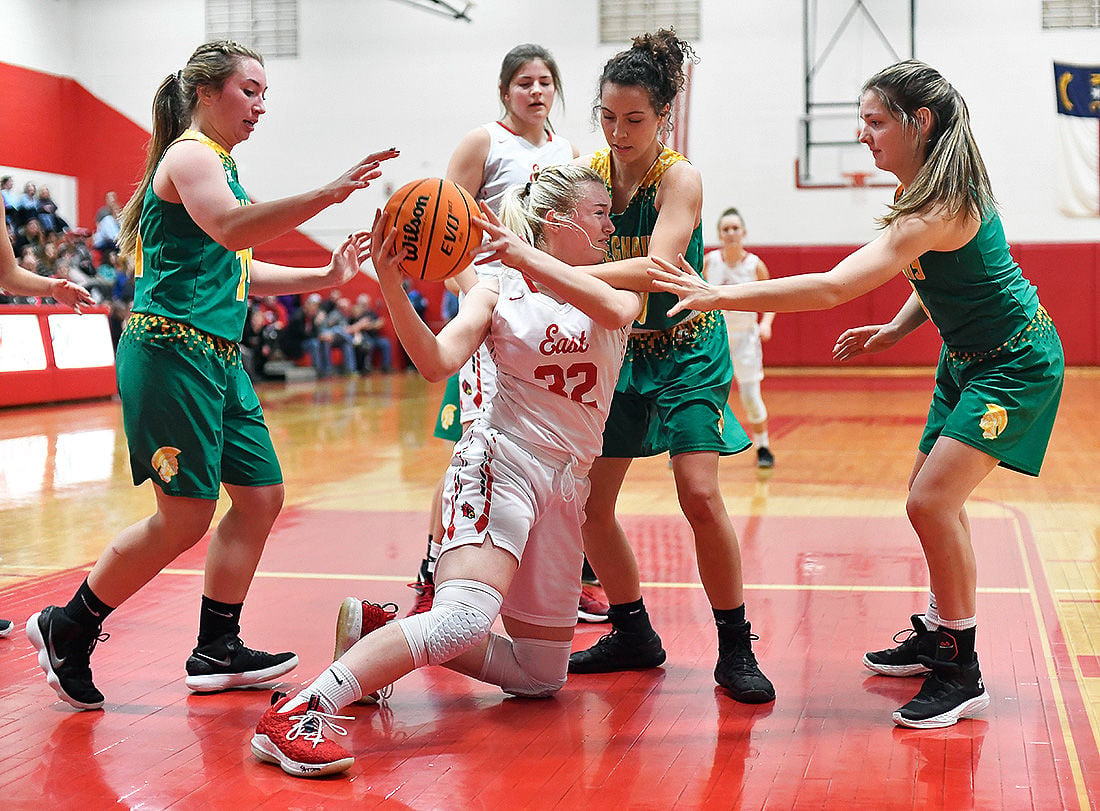 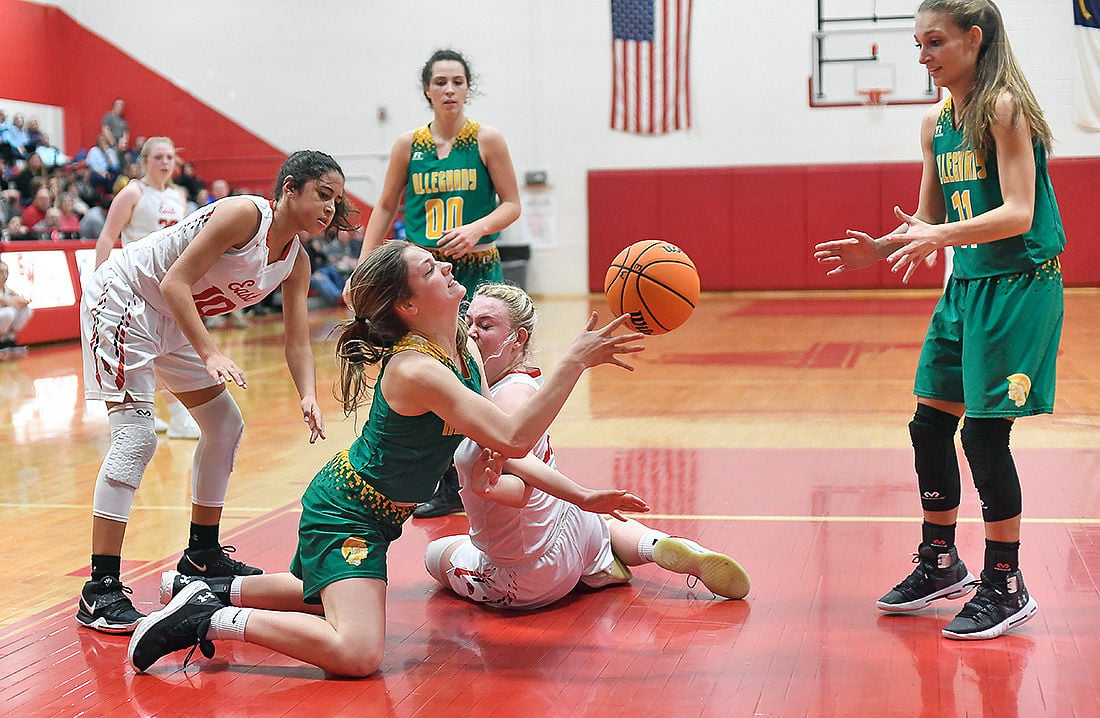 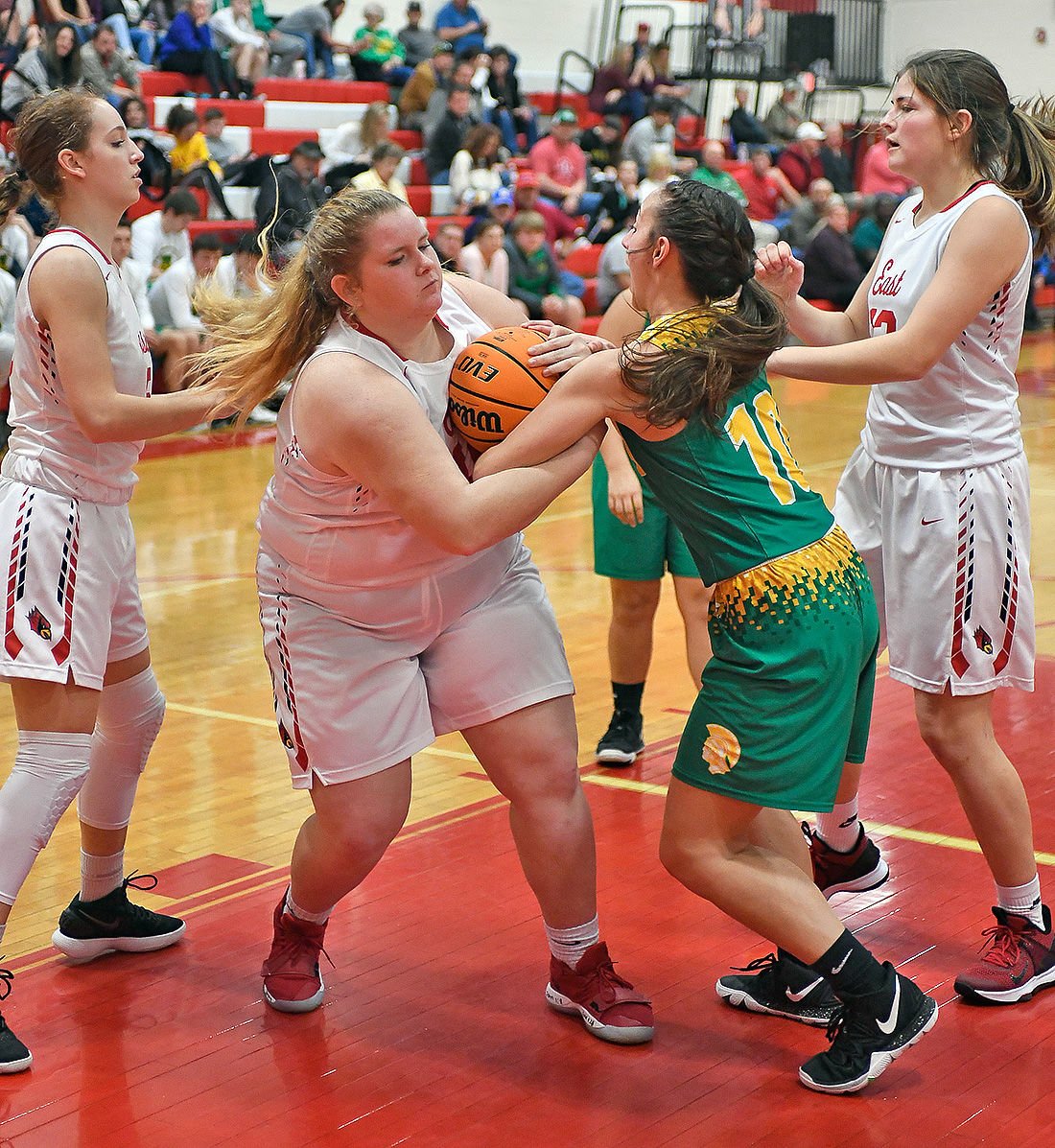 EAST WILKES’ Kaleigh Couch drives to the basket against Alleghany’s Jennifer Miles in the fourth quarter.

If the Alleghany girls were a hashtag—and they probably are somewhere—they would be trending.

As in trending toward a championship.

One night after putting themselves into a share of first place, the Trojans solidified their position with a 37-12 win over East Wilkes Tuesday in Ronda.

Ranked No. 4 among 1A schools by MaxPreps, Alleghany won for the second time in as many nights, improving to 20-2, 10-2 in the Mountain Valley Conference. It’s the first time since the 1991-92 season that the Trojans have won 20 games.

Playing on its Senior Night, East Wilkes lost its seventh straight game and fell to 3-17, 1-11 in the conference.

The Trojans swept the season series and won for the fifth straight meeting.

Since losing in overtime at Wilkes Central 13 days ago, Alleghany has won five straight games by an average of nearly 24 points. The Trojans’ 48-36 home win over Wilkes Central Monday put Alleghany, Wilkes Central and West Wilkes into a three-way tie for first.

West Wilkes’ home loss to North Wilkes Tuesday makes it a two-team scramble between Alleghany and Wilkes Central—which beat Starmount Tuesday—with two games to play. If either or both falter, West Wilkes and Ashe County are a game behind.

“We came out from the start ready to roll,” Kayla Carpenter, the Alleghany coach, said of the win over the Eagles Monday. “We weren’t going to give them the same opportunities that we did the first time we played them…. The perseverance and determination of our girls, it was great to see that.”

With two games in two nights, and with senior starter Madison Brown out due to illness, the Trojans—who average 53 points per game—settled into a half-court offense and had their lowest-scoring game of the season.

A first quarter flurry would be all they need to put the game away.

Alleghany held the Cardinals scoreless in the first quarter and limited them to only two Killian Warren free throws in the first half while taking a 23-2 lead.

MacKenzie Russell had two 3-pointers and a basket, and Haley Rife added a 3-pointer, Abby Hawks a long jumper and Taylor Allen a free throw in a 14-2 game-opening run.

“Several girls have been sick with the flu and a stomach bug,” Carpenter said, “so we’re trying to keep everybody healthy and make sure their legs are ready to roll for Friday night.”

The Cardinals were 0-for-14 from the field in the first half.

“Defensively, they’re some of the best I’ve seen this year,” Matthew Campbell, the East Wilkes coach, said of the Trojans. “On-ball pressure was very nice, and we were very hesitant handling their on-ball pressure. That’s what good defensive teams do—they rush you and they make you panic and make you make decisions quicker than you’re ready to make them.”

The lead reached 32-2 as Abigail Keesling scored all of her seven points within the first five possessions of the third quarter. But the Cardinals, who didn’t score a point in the paint, found the range from the perimeter.

Jaelin Roberts hit a long jumper for East Wilkes’ first field goal, and Lilly Adams and Ava Tharpe added 3-pointers. Kaleigh Couch had a pair of free throws as the Cardinals cut the margin to 34-12.

Russell, who scored in double figures for the second straight game, led all scorers with 10 points.

The Trojans’ current three-season run is their best sustained level of play since their Blue Ridge Conference days. Carpenter, an Alleghany alumnus, grew up in an era where the Trojans finished seventh, eighth or ninth five times in a seven-year period.

“Three years ago, I started building a new foundation,” said Carpenter, who is 55-25 as the Trojans’ head coach, “trying to change the mindset for women’s basketball at Alleghany, and how tough we were going to be. The objective is to be the toughest team to beat every night, no matter who we’re playing.

“I think we’ve done a good job of being competitive.”

In a game postponed from Friday by snow, Ashe County (14-5, 8-3) broke open a close game with strong second and third quarters to take a 39-26 win in Ronda Monday night and extend its winning streak to three games.

The Huskies led only 9-8 after one quarter, but extended the margin to 25-18 at halftime behind five points from Katie Woods and four from Jayden Jones.

After hitting 23 3-pointers in its four previous games, Ashe County only had three against the Cardinals, but one was from Hallie Treva in a 9-0 run starting the third quarter to build the lead to 34-18.

The Huskies swept the season series and won for the fourth straight meeting. That is Ashe County’s longest winning streak against East Wilkes since both have been members of the MVAC.

Briley Church led the Cardinals with 12 points, and Adams and Lilly Brown each scored five. Warren had six rebounds.

Combined with its 62-20 home win over Elkin Tuesday, Ashe County is tied with West Wilkes and trails Alleghany and Wilkes Central by one game with two to play. The Huskies’ final two games are at Wilkes Central and at home against West Wilkes.

Notes: It was the final home game for seniors Tharpe, Kaybree Martin, Savannah Martinez and Aubrey Wallis. Martinez, who injured an ankle during warm-ups Monday and was on crutches before the game, was on the floor to start the game but came out immediately after the opening tip…. Keesling, a four-year varsity player, scored her 1,200th point in a win over Millennium Charter Academy Jan. 29…. The game’s first three-plus minutes were inadvertently played with the boys’ basketball, which is larger in diameter.