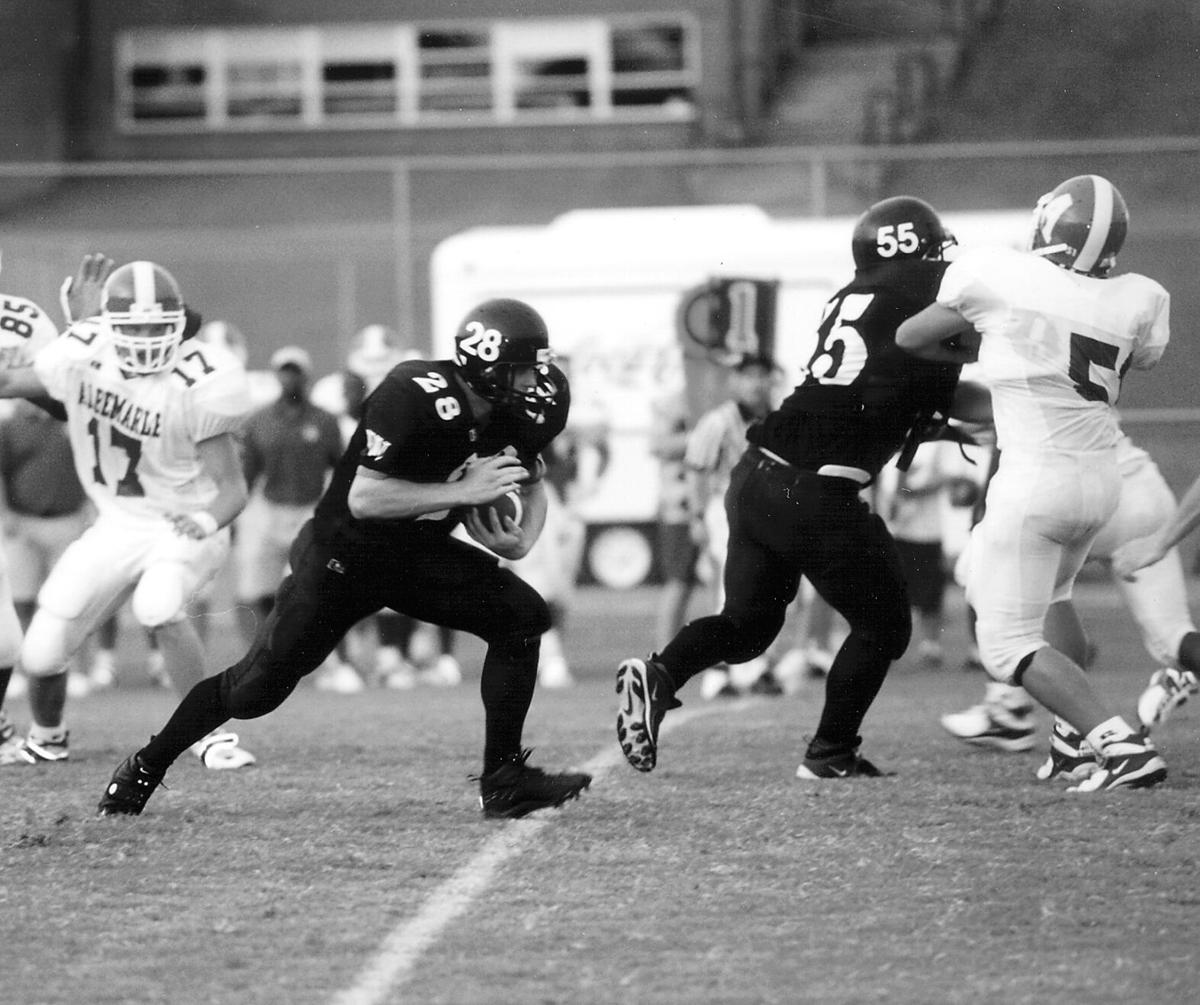 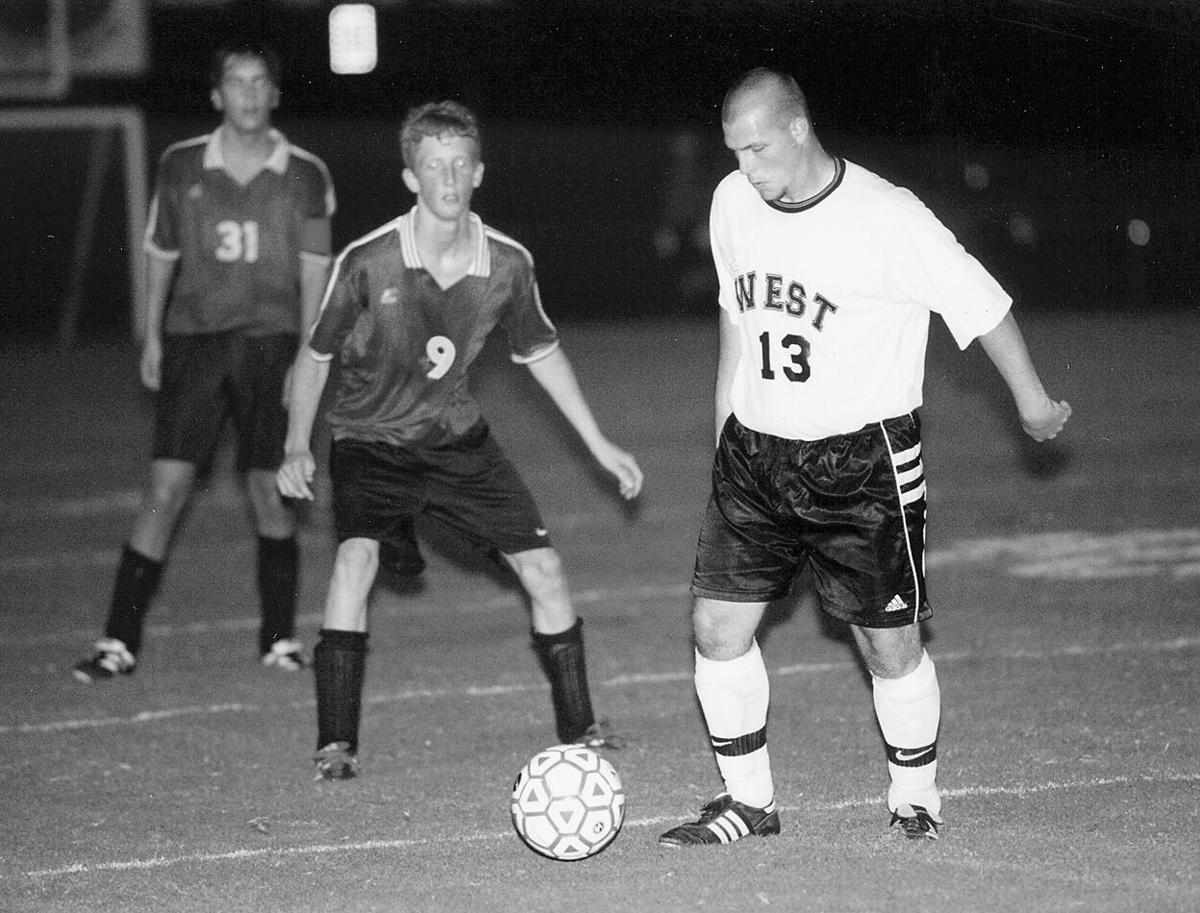 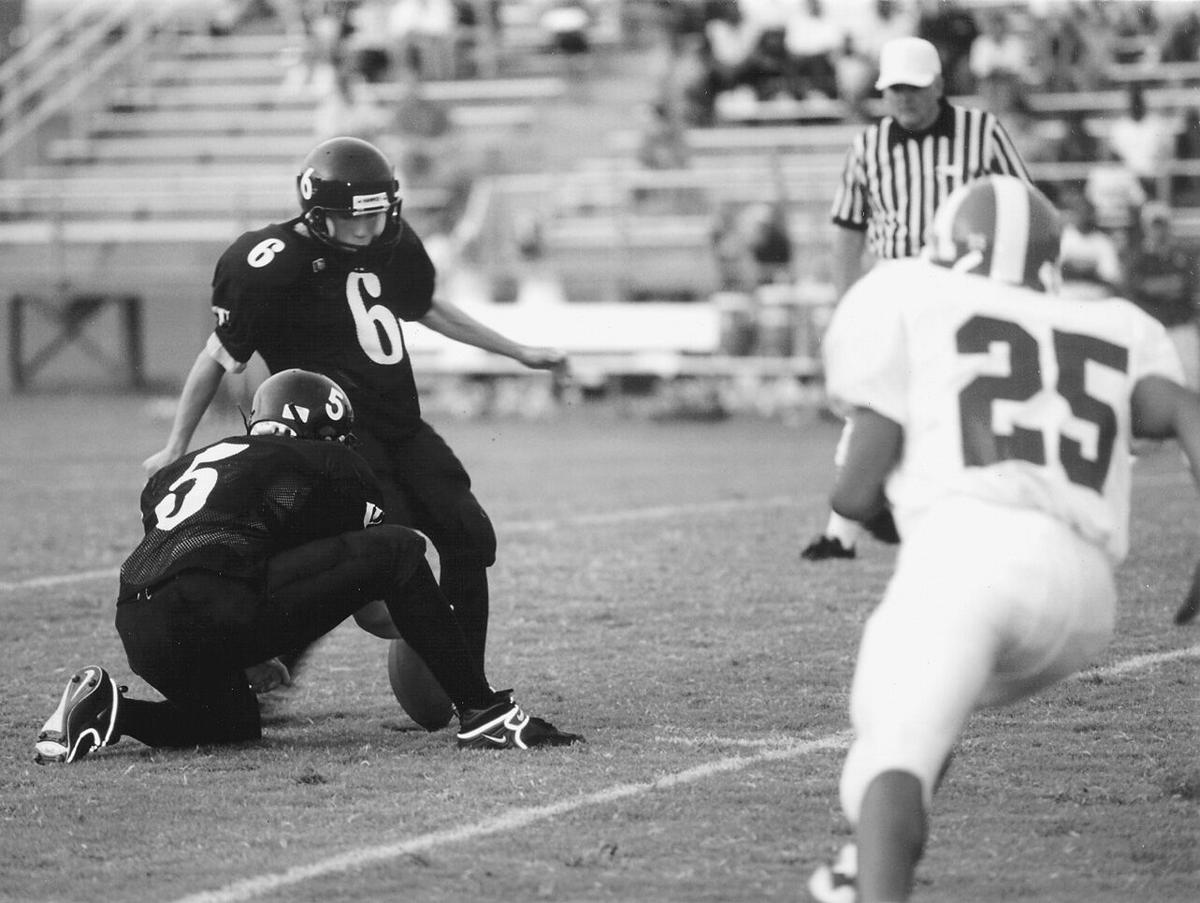 ZACK OLLER (6) was successful on all six of his extra point kicks Friday night. Holding the ball is Brent Miller. The senior also converted a pair of successful onside kicks. 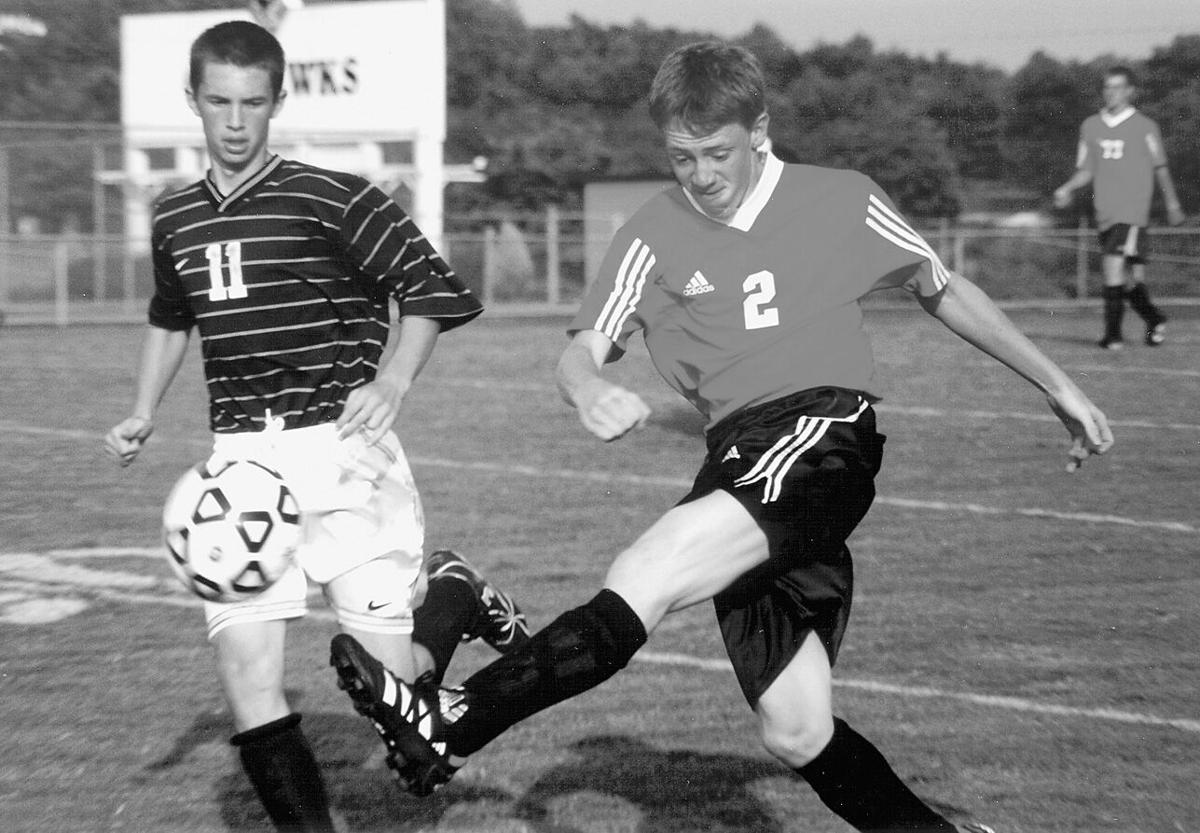 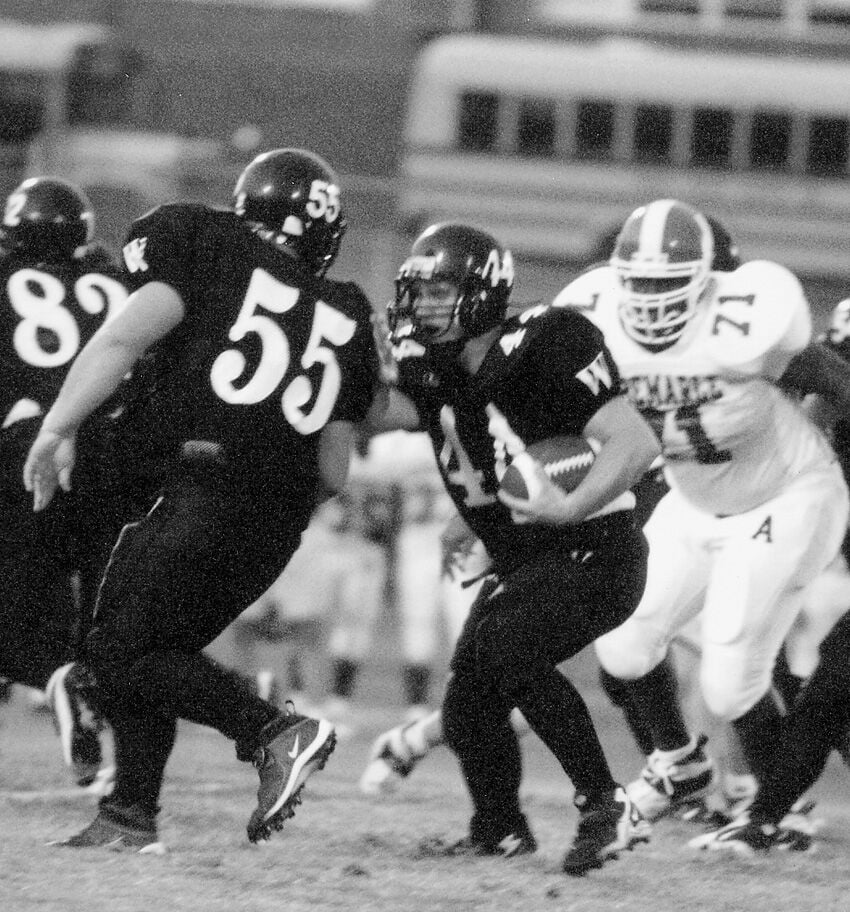 ZACK OLLER (6) was successful on all six of his extra point kicks Friday night. Holding the ball is Brent Miller. The senior also converted a pair of successful onside kicks.

After a week off, we return with the 12th article in a weekly series highlighting big local sports’ anniversaries, given the current down time for local sports (and plan to run it every week through the middle of November). Readers are encouraged to share any of their memories from local sports this time of year by emailing wjpsports@wilkes.net. Photos would be appreciated too but are not a must.

For consideration to be included, please include what month (and day if known) and year the event took place.

This week, we take a look back at some of the bigger anniversaries from Wilkes County sports in the fall months of 2000 ... 20 years ago at this time:

Editor’s Note: West Wilkes picked up a big season-opening win as it began a quest for the first of what would become three-straight Mountain Valley 2A Conference championships. The Blackhawks also faced the task of slowing down future N.C. State University running back T.A. McClendon. It was also the second straight game against a Wilkes County team for the Bulldogs, who fell to East Wilkes in the opening round of the 1999 North Carolina High School Athletic Association 1A playoffs. Albemarle would go on to win three-straight 1AA state championships in 2001, 2002 and 2003 (and then add 1AA state titles in 2009 and 2010). The following article is from the August 21, 2000 edition of the Wilkes Journal-Patriot. It has been edited.

The long-standing tradition of Friday night football renewed in a big way in Millers Creek on Friday as a large crowd turned out to watch the West Wilkes Blackhawks dismantle Albemarle Bulldogs 42-8.

Albemarle, a member of the Yadkin Valley 1A Conference, came into the game ranked 13th among teams in Western North Carolina in one poll and boasted preseason all-state running back T. A. McClendon. But it was the Blackhawks who appeared to be better prepared and more motivated.

West exacted a painful and complete revenge for last year’s 49-0 loss in Albemarle by dominating in all three areas of the game.

The new look Veer offense of Head Coach Wayne Shepherd hit on all cylinders as the offensive line manhandled the Bulldog defense. West had two runners with over 100 yards, led by Dustin Greene’s 121 yards and four touchdowns. Britt Harris finished with 108 yards.

“Coach (Danny) Bentley does a great job (with the offensive line). This is the best line we’ve ever had,” said Greene.

On defense, the Blackhawks easily broke the line of scrimmage and prevented McClendon from getting outside and bottled up any inside room as well.

“Penetration is a word I don’t like to use because we teach not to do that in our defensive scheme,” said Shepherd. “Tonight, we just physically beat them and were moving the line of scrimmage backward.”

In the area of special teams, the numbers speak for themselves — 2-of-4 successful onside kicks, two blocked punts and one hurry which resulted in a 14-yard punt with an 11-yard return, and no long returns by Albemarle off punts or kickoffs.

The game started on a fast note when Zack Oller hit a perfect onside kick as the Hawks broke the huddle. Albemarle was completely taken by surprise and Oller recovered his own kick on the Bulldog 49.

“There are three phases of the game and we spend equal time on all three,” said Shepherd. “We decided early this week, that we were going to be better than them of special teams, and we were.”

The Blackhawks led 7-0 after one quarter and 21-0 at halftime.

Jason Trivette blocked a pair of punts, with his second one setting up the third of Greene’s four touchdowns — this one from five yards away.

After Greene scored his final touchdown with eight minutes in the fourth quarter, David Dyer added a score a minute later from four years out on a quarterback keeper following a Bulldog fumble.

Albemarle avoided being shut out with two minutes to play when McClendon caught a 33-yard touchdown pass from Micah Rushing, who would tack on the two-point conversion.

Editors’ Note: In its sixth season as a program, the West Wilkes captured the inaugural Wilkes Cup against a future soccer power in Northwest North Carolina, Ashe County, which was established the previous fall after the consolidation of Northwest Ashe, Ashe Central and Beaver Creek high schools. The tournament was used an early-season test for local soccer programs, formed by the late Jim Caudill, who was the head coach at West Wilkes at the time, North Wilkes Head Coach Rick Kukor and former East Wilkes Head Coach Kyle Barber. The Cardinals, who were in their program’s second season, also took part. The following article is from the August 21, 2000 edition of the Wilkes Journal-Patriot. It has been edited.

In the consolation match Saturday afternoon, East Wilkes fell 9-0 to Alexander Central. Chase Tharpe was the only Cardinal to earn all-tournament honors.

West dominated the pace of the championship match against Ashe County and by the half, had built a comfortable 3-0 lead. Wheeler got things started with a goal on a Sloop service. West Wilkes Head Coach Jim Caudill was pleased to see Sloop, who scored the third goal on a rocket before halftime, dishing out assists.

Scott Christenbury connected for the second goal on a “brilliant run.”

“Daniel holds most of the scoring records at West Wilkes, so it was neat to see him be unselfish,” said Caudill. “He had really matured and has become a much better player. His shot is strong and accurate at times.”

Two more goals and a stifling defensive performance by West in the second half dashed any hope of a Huskies comeback. Even so, Caudill was not entirely satisfied with his team’s performance.

“Not to take anything away from Ashe County, but we really didn’t play up to our potential,” said Caudill. “Our execution is not what we want, but it is still early in the season.”

Overall, Caudill was pleased with the tournament and contributed much of the Wilkes Cup’s success in its inaugural year to the tournament’s sponsor, Duncan Sports.

“Duncan Sports has been outstanding — they really made it go,” said Caudill. “I can’t wait until next year when maybe North or East hosts the tournament and we get to try to defend our title.”

A few clouds. Low around 60F. Winds light and variable.

Mostly cloudy with showers and a few thunderstorms. Low around 65F. Winds light and variable. Chance of rain 40%.