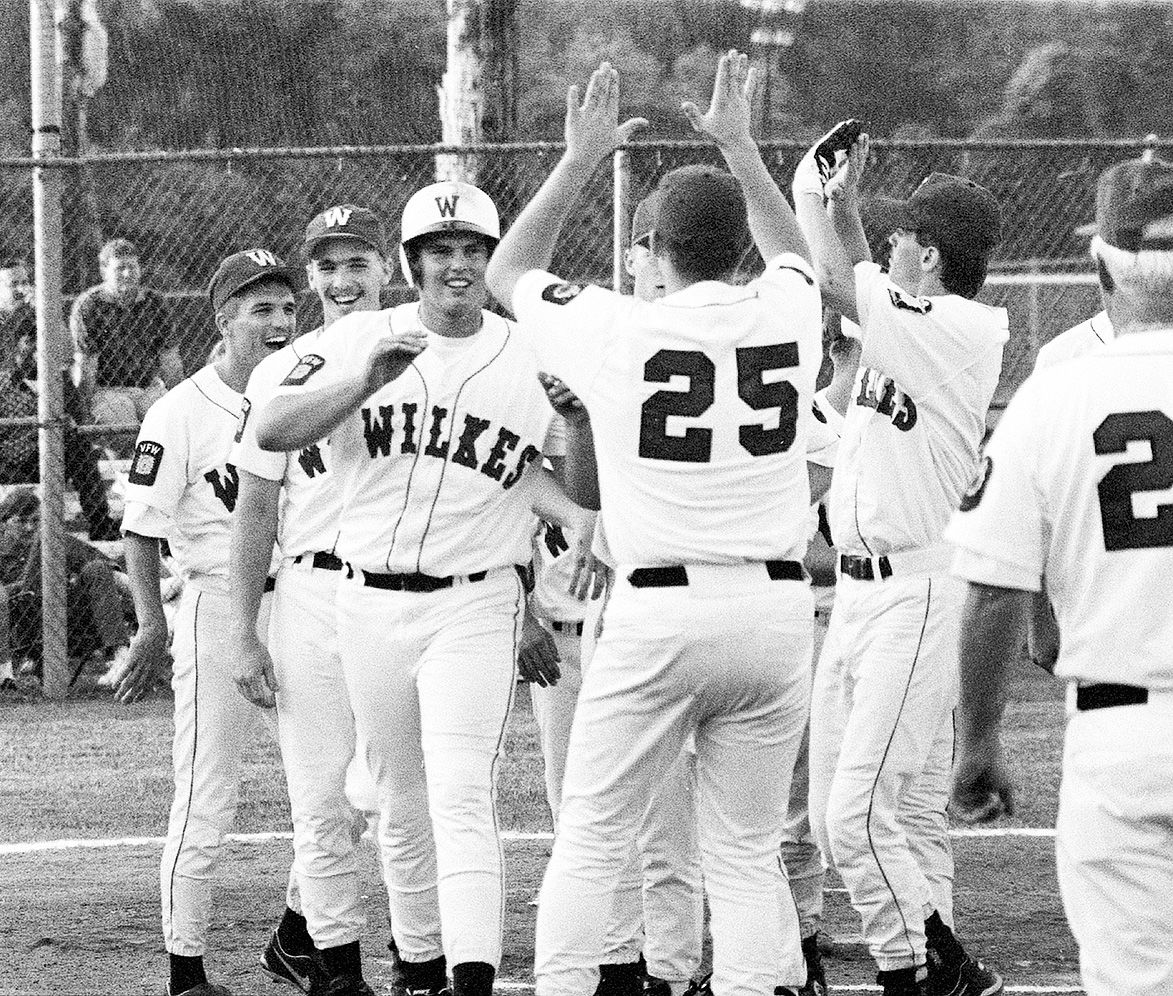 Wilkes County’s Jeff Nichols (with helmet) drove in nine of his club’s 17 runs in its win over Concord to advance Post 31 to the Southern Division playoff finals for the first time in the program’s history. Nichols slugged two home runs and was a double shy of hitting for the cycle. 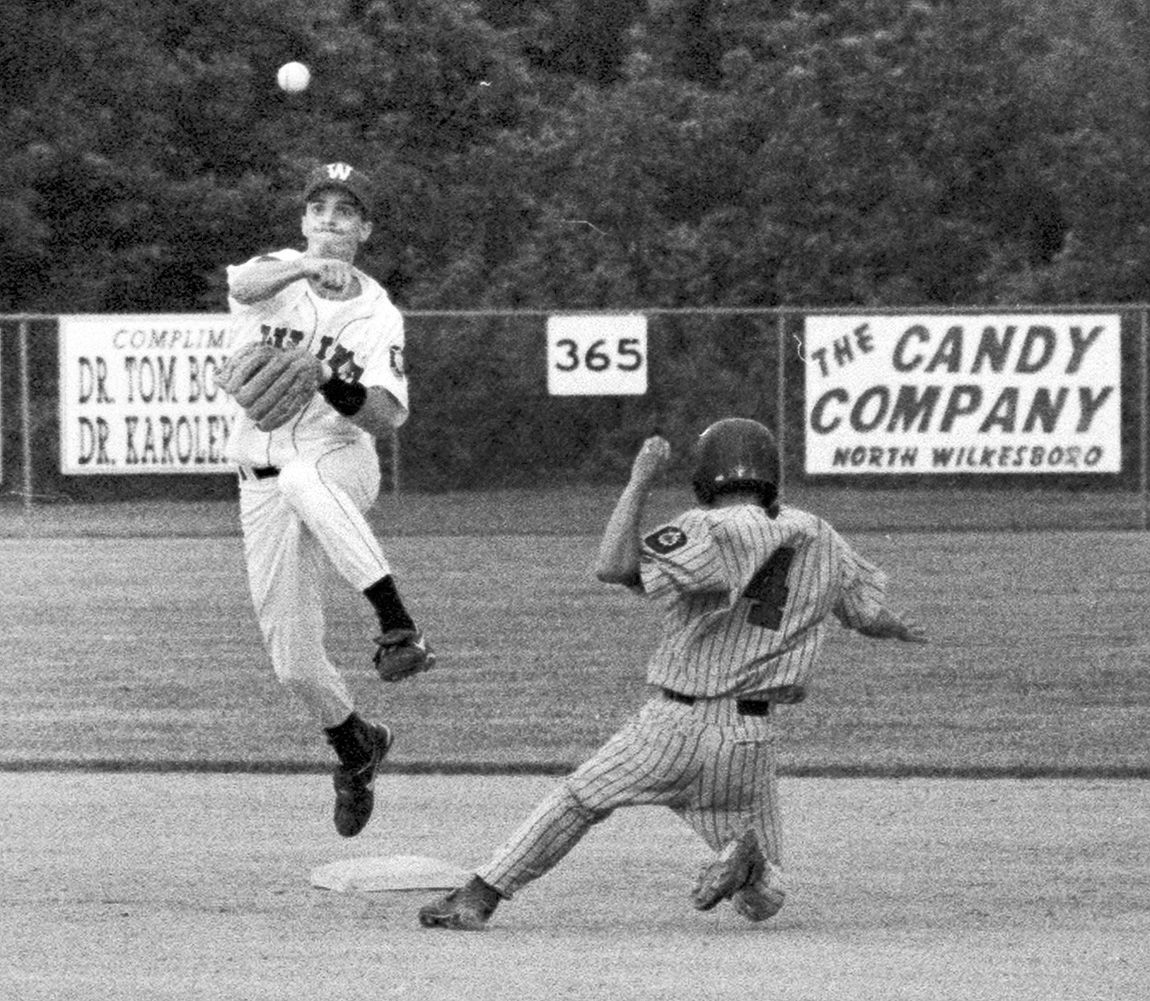 After forcing Andy Foil at second base, Wilkes County shortstop Jamey Bare make a graceful pivot throw to first base to complete a first-inning double play against Concord.

This is the seventh article in a weekly series highlighting big local sports’ anniversaries, given the current down time for local sports. Readers are encouraged to share any of their memories from local sports this time of year — namely May, June and July — by emailing wjpsports@wilkes.net. Photos would be appreciated too but are not a must.

For consideration to be included, please include what month (and day if known) and year the event took place. We’re particularly looking for events that took place on anniversary-type years from 2020 — 10, 20, 25, 50 or 75 years ago — but any event will be considered if it fits the other scope of criteria.

For the second week in a row, and for good reason, we take a look back at some of the bigger anniversaries from Wilkes County sports in the summer months of 1995 … 25 years ago at this time:

Nichols blast Wilkes into the finals

EDITOR’S NOTE:  In its ninth season of fielding an American Legion baseball program, Wilkes County defeated Concord Post 51 in a best-of-seven series to advance to its first American Legion Southern Finals for Area III. In the finals, Post 31 faced off with North Carolina American Legion power Rowan County, which has won an impressive seven state American Legion championships. Despite getting swept by Post 342 in the finals, Wilkes County finished the season 25-12 — which still stands as one of the best records in Post 31’s history. Wilkes County had a rather talented squad, which included future pro baseball player Jason Howell. Some other players on that squad were Jeff Nichols, Matt Fletcher, Jamey Bare, Brandon Steelman, Brandon Prevette and Rick Alexander. Nichols went 9-0 on the mound and had a 1.90 earned run average. Nichols batted .365 with five home runs and 31 runs batted in while Bare hit .320 with 31 RBIs.  The following article is from the July 10, 1995, edition of the Wilkes Journal-Patriot. It has been edited.

Nichols went 4-for-6 at the plate, with nine runs batted in, and he capped Post 31’s 17-7 victory with a towering grand slam home run in the eighth inning.

Wilkes County advances to the Southern Division finals for the first time in the program’s history. In the finals, Post 31 will play Rowan County — the team that it shared a regular season championship with this season.

After sweeping Surry County in four games and getting a night off, Rowan will host Wilkes tonight in Game 1. Game 2 is scheduled for Tuesday in North Wilkesboro, before the series swings back to Catawba College on Wednesday.

“It’s just a thrilling moment,” stated Wilkes Head Coach Kerry Nichols. “Making the playoffs is something that we set as our goal this, and this is ‘icing on the cake’ to go into Rowan with the tradition it’s got. Some people have counted us out already, but we’ll give it our best shot.”

Brandon Steelman won his second game of the series with a complete-game effort on the mound for Post 31. The right-hander coughed up 13 hits and seven runs, but only three of those runs were earned. Steelman, who pitched purely on heart and adrenaline in the final two innings, walked six and struck out eight.

Jeff Nichols made his mark in the Concord series with two complete-game victories on the mound, but on Sunday his sizzling bat did all of the talking in the front of a record crowd at the V.F.W. Legion Field.

“Jeff was the go-to man of Wilkes County,” indicated Kerry Nichols. “He had a fantastic game. He hit the ball better than I’ve seen him hit it. He also made two good defensive plays.”

In the first inning, after Matt Fletcher reached on a bad-hop single with one out, Jeff Nichols crushed a delivery from Concord’s Billy Chapman over the left-center field fence.

After leading 4-0 after two innings and 7-2 after four, Post 31 put the game out of reach after scoring four more runs in the fifth frame.

Wilkes County batted around in the eighth against Concord’s third pitcher, Jimmy Adkins Jr. Jason Hudler led off with a single up the middle, and after Jennings Prichard sacrifice him to second, he scored on Bare’s line drive single.

After pitches hit Steelman and Timmy Davis, Fletcher drew a bases loaded walk to score Bare. Then, Nichols cleared the bases with a monster shot to left center that traveled at least 400 feet before landing.

In addition to Nichols, Brandon Prevette went 3–for-5 at the plate. Fletcher, Bare and Steelman finished with two hits apiece. Phil Brant led Concord with three hits and as many RBI. Jason Bowers and Steven Harwood each added a pair of hits.