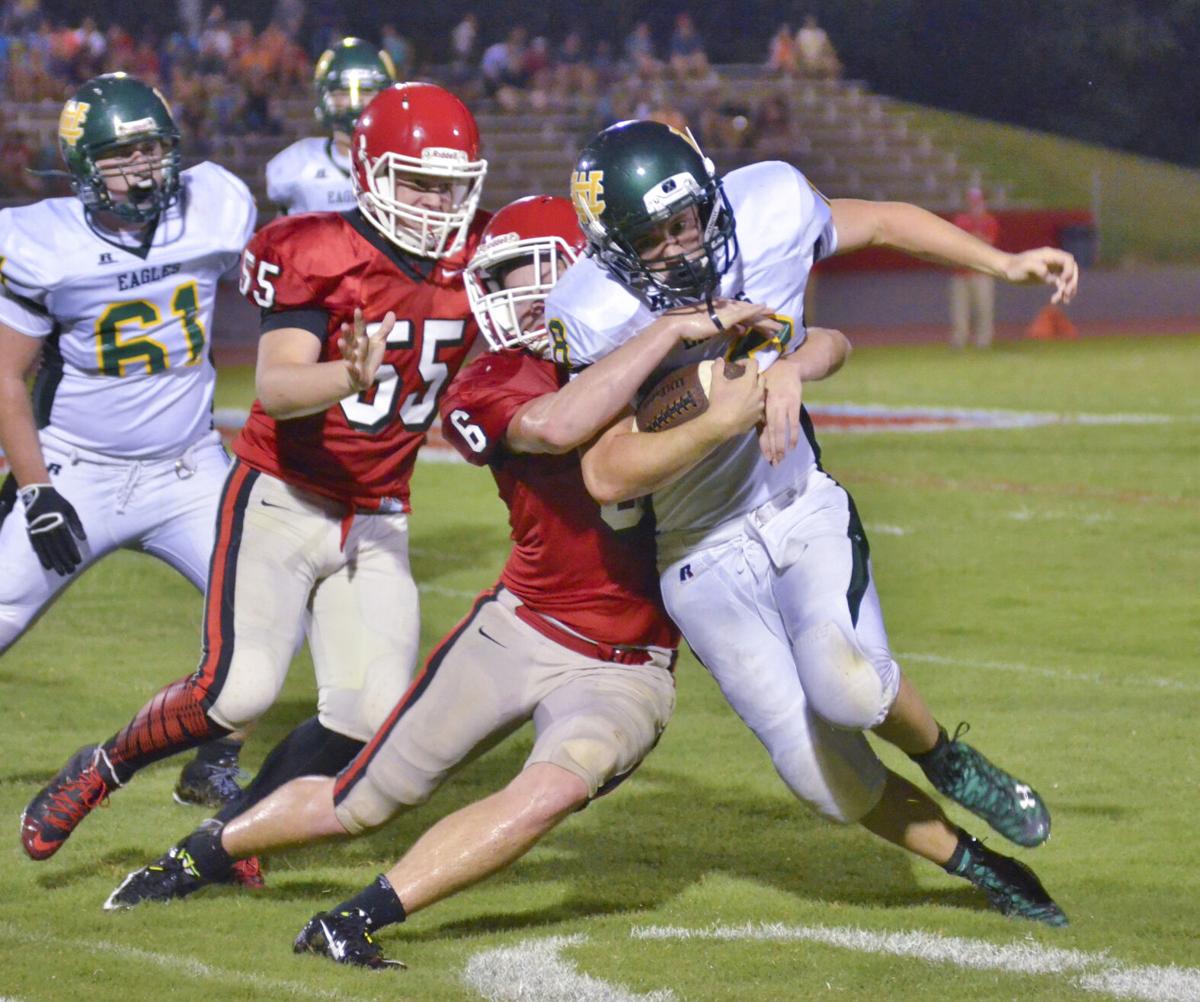 DALTON COMBS attempts to grind out a few extra yards while being brought down by North Iredell’s Travis Summers and Wesley Bordeaux in the third quarter. Combs had a hand in three of Wilkes Central’s seven touchdowns in the win.Also in the photo for the Eagles is Hunter Shepherd 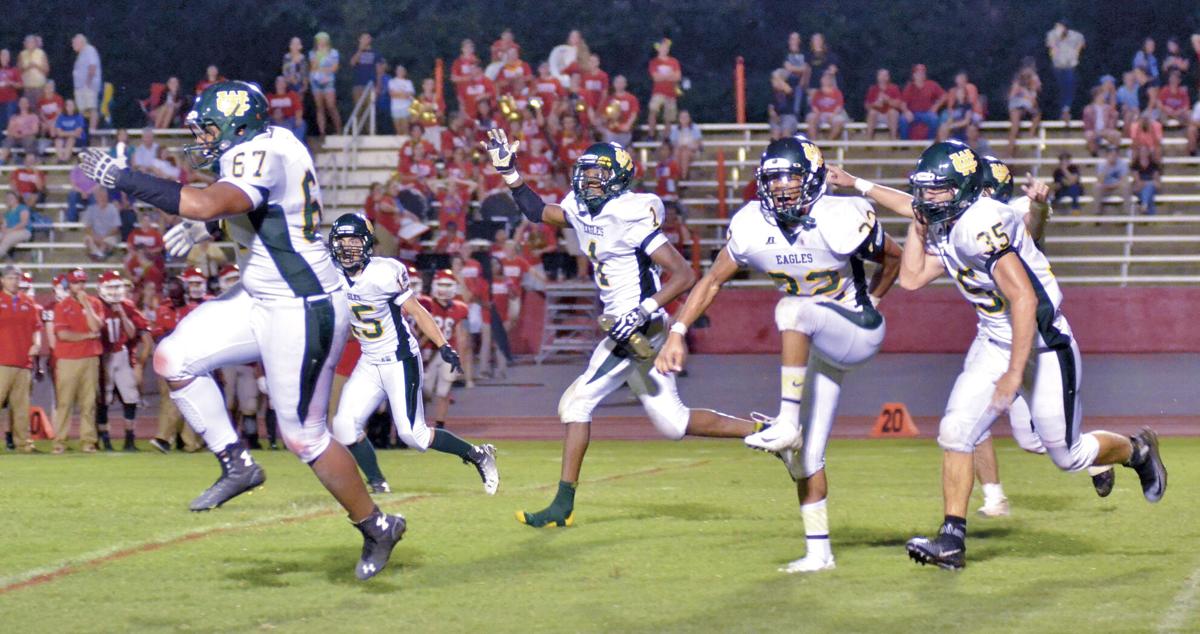 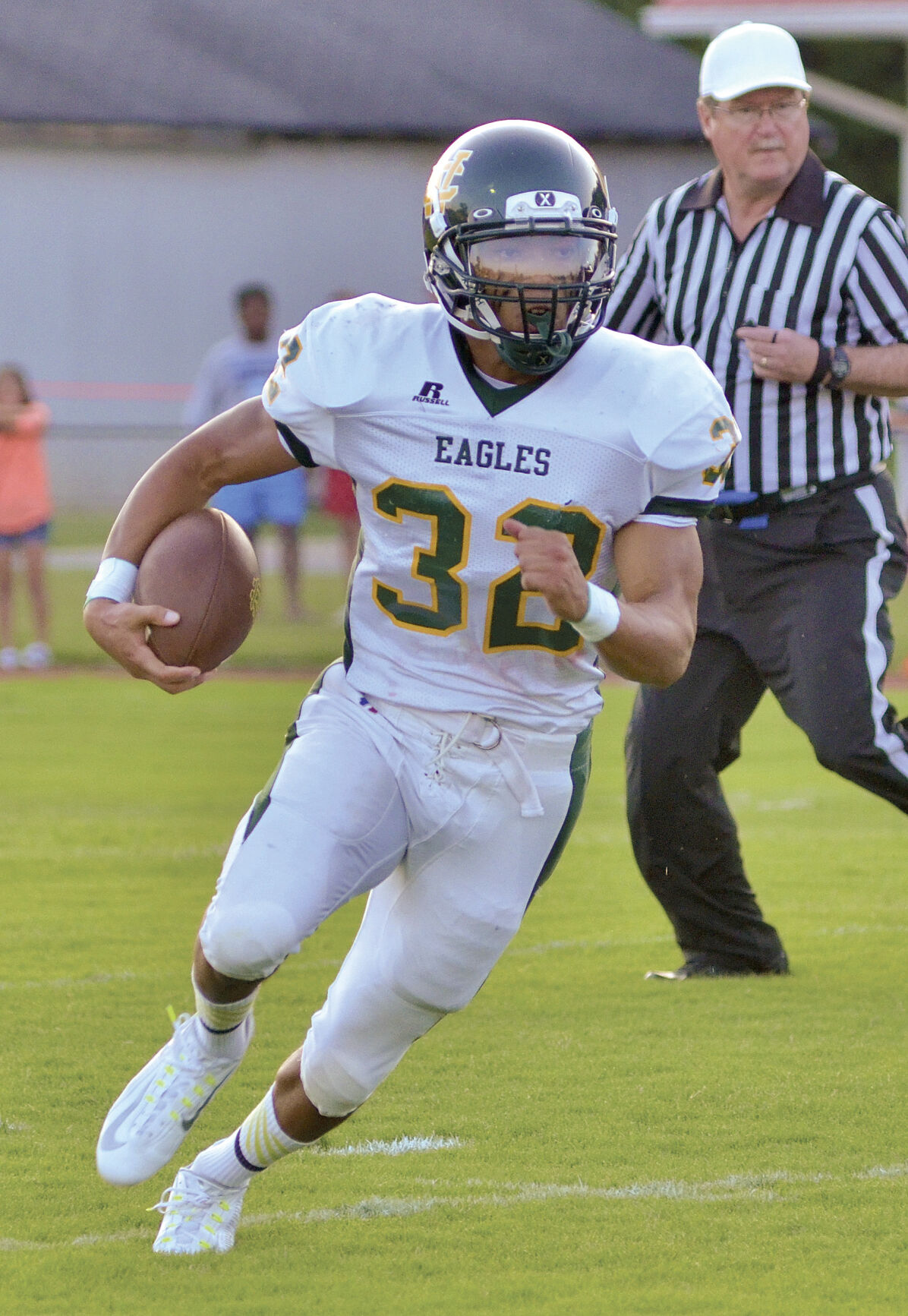 Andrew Bynum runs for some of his game-high 249 yards in Wilkes Central's win.

DALTON COMBS attempts to grind out a few extra yards while being brought down by North Iredell’s Travis Summers and Wesley Bordeaux in the third quarter. Combs had a hand in three of Wilkes Central’s seven touchdowns in the win.Also in the photo for the Eagles is Hunter Shepherd

This is the 13th article in a weekly series highlighting big local sports’ anniversaries, given the current down time for local sports (with plans to run it every week through the middle of November). Readers are encouraged to share any of their memories from local sports this time of year by emailing wjpsports@wilkes.net. Photos would be appreciated too but are not a must.

For consideration to be included, please include what month (and day if known) and year the event took place.

This week, we take a look back at some of the bigger anniversaries from Wilkes County sports in the fall months of 2015 ... five years ago at this time:

EDITOR’S NOTE: The 2015 season might go down as one of the most successful ones, in terms of wins, in the last decade as Wilkes County football teams won an impressive 29 games (after winning just nine the year before). The county also had two schools win 10 games or more and had multiple teams win a state playoff game (2015 also happens to be the last season that a Wilkes County school won a game in the North Carolina High School Athletic Association state playoffs). Wilkes Central was one of the teams to win 10 games and win a state playoff game. The Eagles, who finished 10-3 that season, lost in the second round of the 2AA state playoffs to East Lincoln. The Mustangs featured a pair of brothers in Chazz and Sage Surratt, who have gone on to play at the University of North Carolina-Chapel Hill and Wake Forest University, respectively. In addition to this outcome between the Eagles and Raiders, four of the current five matchups have been determined by a touchdown or less. We’ll have more from this season later on this fall, but for now, the following article is from the Aug. 24, 2015, edition of the Wilkes Journal-Patriot. It has been edited.

OLIN — Dalton Combs could not have asked for a better start to his senior season.

Wilkes Central’s quarterback accounted for three of his team’s touchdowns in Friday night’s season opener but it was his last two that helped the Eagles come away with a 47-39 overtime victory against North Iredell.

Combs, who finished with 103 yards of offense, tied the game at 39 with less than a minute remaining in regulation when he found fellow senior Madison Dunn for a 14-yard touchdown pass.

In overtime, Combs used his legs to score on a nine-yard run and Justin Parsons added the two-point conversion.

“I saw that they didn’t have a safety back there and saw that Madison was open,” said Combs on the game-tying play. “I just wanted to win tonight and I wanted to help out my team any way that I could.”

The Raiders had a chance to force a second overtime after Ka’Dree Campbell rushed for four yards on his team’s first play to move the ball to the Eagles’ 6-yard line.

Campbell fumbled the ball on the next play and Central recovered the ball for the win marking Wilkes Central’s first nonconference victory since 2012.

Ron Turner, Wilkes Central’s second-year head coach, was pleased with how his team fought back after letting a 20-point halftime lead slip away. He also saw several things that his team needs to work on.

The Eagles defense allowed 344 yards in the second half after yielding just 100 yards and six points in the first half.

“It was a true team effort but when we watch the film, we’ll be amazed at how much work we still have to do,” said Turner. “We made a ton of mistakes but it’s still early. We had way too much confusion on offense that we’ve got to get ironed out and they made some adjustments at halftime that hurts us on defense but I think the first half showed the potential of our defense.”

Combs played a key role late in the contest but it was Andrew Bynum who helped Wilkes Central get out to a 26-6 halftime lead following a 40-yard touchdown run.

Bynum, who also scored on touchdown runs of three and 80 yards, finished with 249 yards with eight of his 29 rushing attempts going for 10 yards or more.

North Iredell exploded for 33 second-half points and Campbell played a key role in his team’s rally.

The Raiders sophomore running back finished with a team-high 162 yards and had touchdown runs of 38 and 80 yards in a 38-second span of the third quarter.

“Ka’Dree ran the ball well for us but along with that, our whole offensive line did a whole lot better job in the second half,” North Iredell Head Coach Sandy Grinton said. Grinton is about to enter his third season as head coach at Mountain Valley Athletic Conference foe Starmount.

Marquis Dukes finished with 103 yards and tied the game at 33 with 8:32 left in the contest on an 11-yard run. The junior also added the two-point conversion.

The Raiders (0-1) experienced a scary moment during the Eagles’ final drive with just under two minutes left in regulation when Tanner Summers, who put North Iredell ahead 39-33 just minutes earlier, had to be carted off the field.

After a personal foul penalty by the Raiders, Bynum ran for 16 yards to earn first-and-goal from the Raiders’ 7-yard line to set up Combs’ game-tying pass.

Combs also found receiver Jasiah Ferguson twice on the final drive on pass completions of 39 and 13 yards for first downs.

The sophomore had only been targeted once before the final drive but Combs saw something in the defense he felt he could capitalize on.

“They were having loose coverage on him so I knew we had him and he was big on that drive,” Combs said.

Notes: North Iredell, which travels to Forbush next Friday, was penalized 11 times for 104 yards and lost three fumbles in game…JoJo Horton scored on a 4-yard run in the second quarter for Wilkes Central while Cole Smith hauled in a 20-yard touchdown pass in tight coverage from Combs in the first quarter.

Areas of fog early, then partly cloudy in the afternoon. High 77F. Winds light and variable.