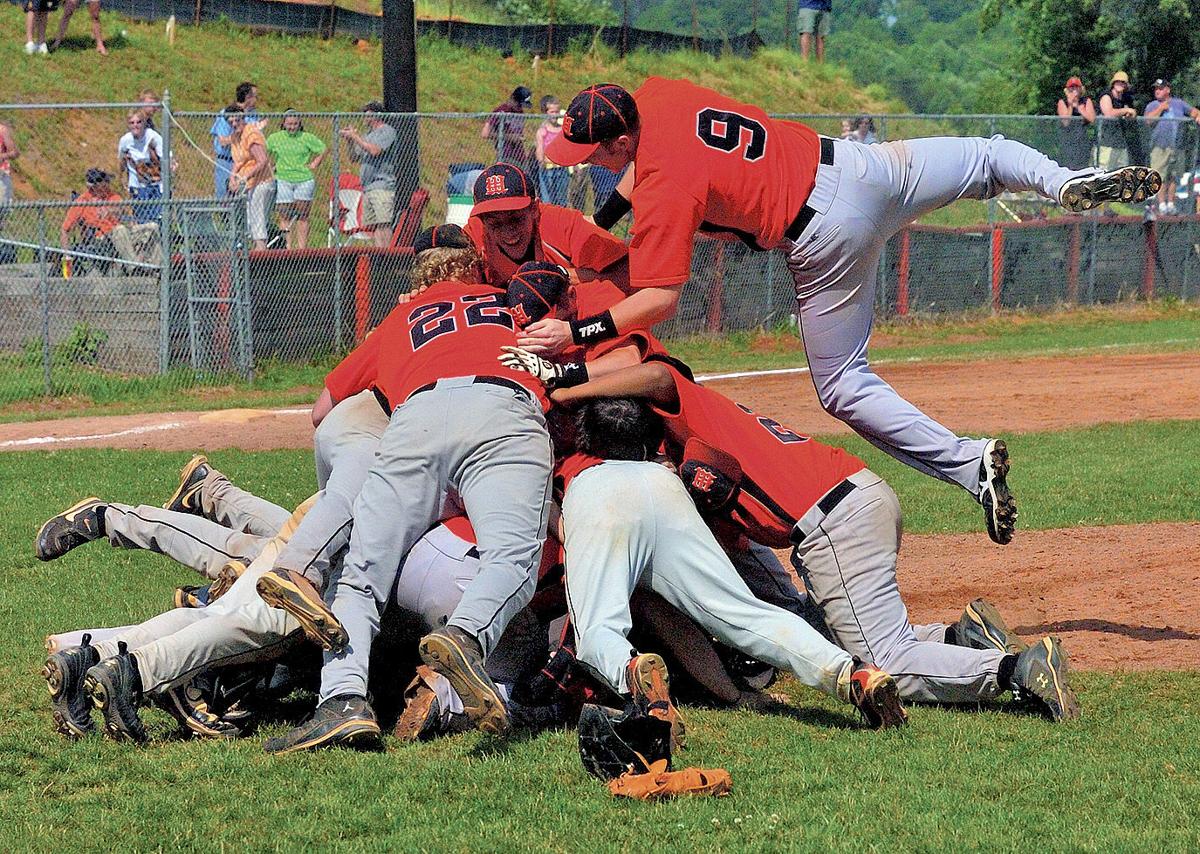 Scott Gambill (9) leaps atop the pile as the West Wilkes baseball team celebrates its 9-6 win over former Northwest Conference rival Bishop McGuinness in the deciding Game 3 of the 2010 Western Region finals. Gambill’s three-run homer capped a six-run fourth inning and gave the Blackhawks a 7-4 lead. West Wilkes earned a berth in the state finals for the second time in school history and the first time since 1987. 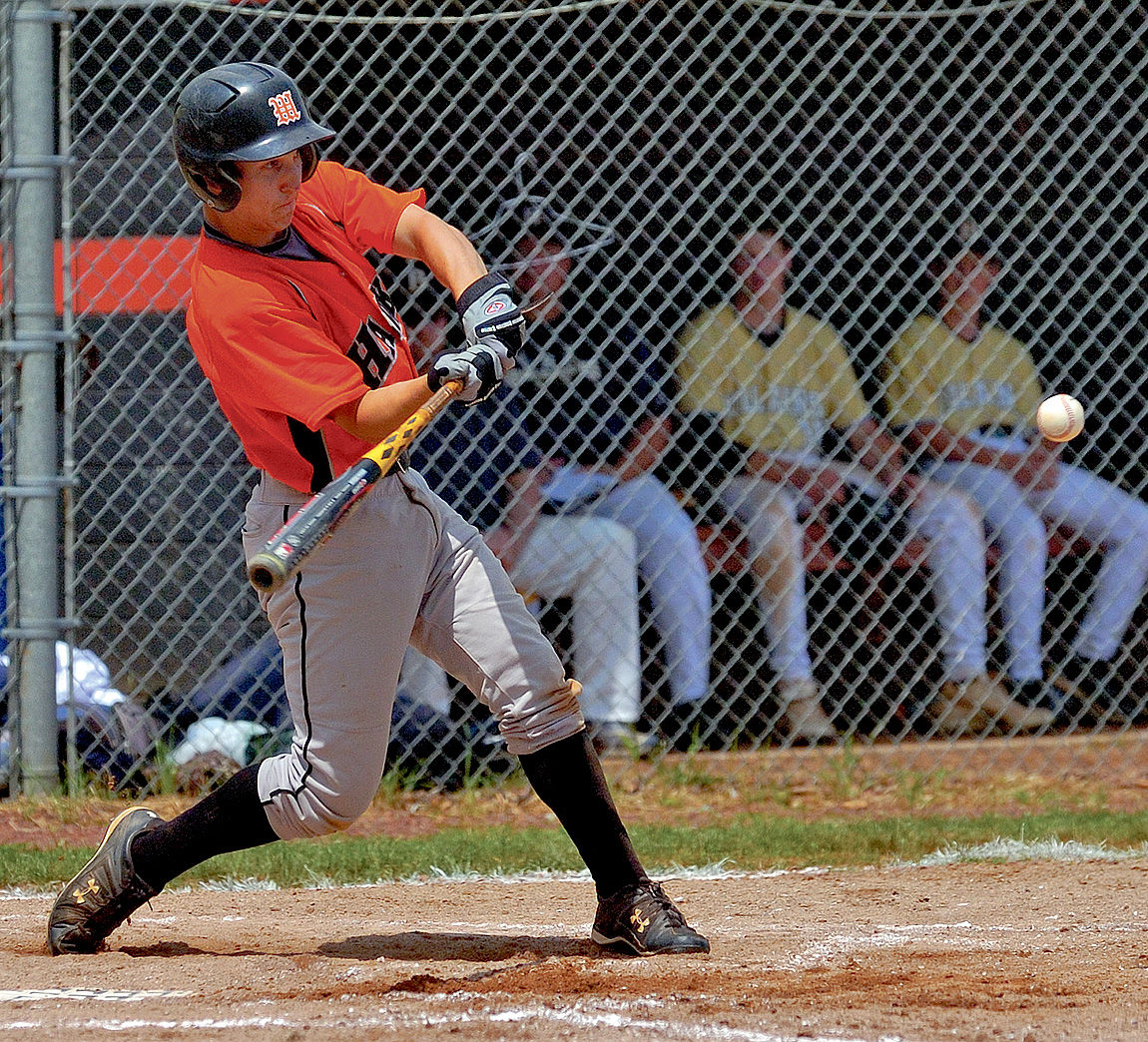 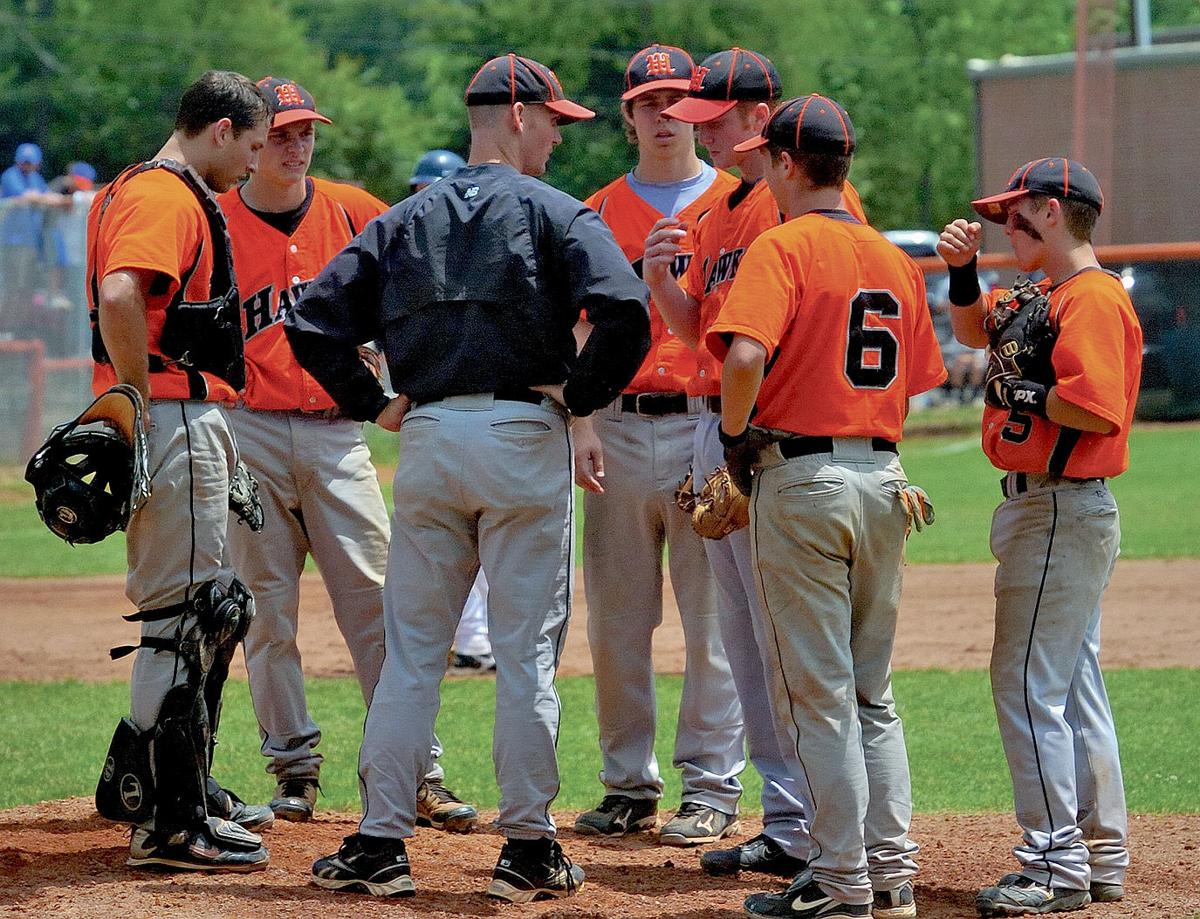 Scott Gambill (9) leaps atop the pile as the West Wilkes baseball team celebrates its 9-6 win over former Northwest Conference rival Bishop McGuinness in the deciding Game 3 of the 2010 Western Region finals. Gambill’s three-run homer capped a six-run fourth inning and gave the Blackhawks a 7-4 lead. West Wilkes earned a berth in the state finals for the second time in school history and the first time since 1987.

Of the 64 teams that entered the 1A baseball playoffs in 2010, a full dozen had better records than West Wilkes’ 15-10 mark.

But the Blackhawks were hot, having won nine of their last 11 games to finish second to Wilkes Central in the reformed 1A/2A Mountain Valley Conference and earning the split conference’s top 1A seed.

Playoff brackets were set differently in 2010. Instead of the current system of ranking teams 1-32 in each region, each conference had a predefined number of slots, with “wild card” teams finishing out the brackets based on record. For example, one conference’s No. 1 seed might be scheduled to play another conference’s No. 4 seed in the first round. The brackets were prepared well in advance of the season.

If two equal seeds would meet in a subsequent round, the home team was determined by where each team’s conference was listed on a seeding priority chart. This rotation changed every season.

North Wilkes made the playoffs as a wild card in Josh Day’s only season as coach after consecutive 3-17 seasons in 2008 and 2009. The Vikings’ reward was their fourth meeting of the season with the Blackhawks.

West Wilkes had won the first three meetings by a combined 38-3. But the Vikings took an early 2-0 lead.

And then it rained.

The Friday game was postponed until Saturday, and the Blackhawks regrouped, scoring 17 unanswered runs, 11 of them unearned, in a 17-2 win that was their highest-scoring game of the season. Tyler Stotler had three hits, and Jacob Shepherd had a home run and five RBIs.

Chris Daniels hit a three-run homer in the first inning to give Robbinsville a 3-0 lead, but the Black Knights wouldn’t hit a ball out of the infield after that inning.

Pitching for the second straight game, Gambill recorded his first 11 outs by strikeout—with nine in a row at one point—and threw a two-hitter.

“From the get-go, I felt good,” Gambill said after that game. “I had a rough first inning… but once I got going, I just rolled right through it.”

The Black Knights’ lead didn’t last long. Shepherd hit his third homer in his past four games to tie it 3-3 in the bottom of the first. An inning later, Stotler, a sophomore, hit his second of the season, also a three-run shot, to give the Blackhawks the lead for good.

The 13-3 win put West Wilkes in the third round of the playoffs for the first time since 1999.

“Once you get to the playoffs, anything can happen,” Ben Wellborn, the West Wilkes head coach, said after the game. “We really like our chances. We’re competing, and we’re playing the best baseball we’ve played all season.”

And after the Blackhawks rallied from a 5-2 deficit to take a 6-5 lead, the Yellow Jackets’ Zach Cox doubled in the sixth and scored on error number six to tie the game.

Logan Hallock didn’t play in West Wilkes’ first-round game and hadn’t pitched since injuring his back in the conference tournament finals against Wilkes Central.

Hallock gave up all six runs—four of them unearned—but more than made up for it in the bottom of the sixth. With Ethan Church on base after a walk, Hallock hit a two-run homer on the first pitch he saw from Yellow Jackets reliever Kalen Phillips to give the Blackhawks an 8-6 lead.

It was Hallock’s first hit of the playoffs.

“I was due for something,” Hallock said after that game. “I hadn’t hit the ball in about six games…. I’m a senior—guys look up to me and expect me to come through. Coach called a hit-and-run, and I did some hitting and some running.”

Gambill got the last four outs for his third straight win of the playoffs.

In its fourth-round game against Murphy, West Wilkes would face its third straight opponent from the Big Smoky Mountain Conference. It was also the first time the Blackhawks would play another No. 1 seed.

The Bulldogs were conference champions and quite possibly the best team in the Western Region bracket, entering the game with a 23-0 record.

Murphy had hit seven home runs in its first three playoff games, scored in the first inning in all three and outscored opponents 44-3. Its closest game was a 9-1 second-round win over East Wilkes.

The seeding priority rotation meant West Wilkes got to host the game, and Murphy’s Bulldogs were no match for the Blackhawks’ bulldog in Gambill.

Gambill threw a one-hitter and struck out 14, beating Josh Coker, who had been an all-state selection the season before. Gambill pitched out of a bases-loaded jam in the sixth and got a strikeout and a groundout with runners at second and third in the seventh.

“I knew that if we didn’t win, it was going to be my last game,” Gambill said after the game, “and I’m not ready to quit yet.”

It would be the last win of his career.

West Wilkes manufactured two early runs and put the game out of reach on a grand slam by junior Andrew Ortiz in a 6-0 win.

Ortiz hit two home runs in his career. Both were grand slams.

West Wilkes’ first trip to the regionals since 1991 meant a reunion with Bishop McGuinness. The Blackhawks and Villains had shared the Northwest Conference championship the season before.

A No. 2 seed, the Villains had upset two No. 1 seeds in South Stanly and Cherryville to reach the regionals.

Regional play is best-of-three and is now spread over a week with both teams getting home games. In 2010, the Blackhawks got to host all three games, which were condensed into a long weekend sandwiched around West Wilkes’ graduation.

Hallock made his second start as a pitcher in Game 1 and threw a complete game on a Thursday evening, and the offense erupted behind him with 14 hits.

In Game 2, Gambill struggled for the first time in the playoffs, needing 39 pitches to escape a three-run first inning early on a Saturday afternoon.

West Wilkes took a 5-4 lead in the fourth on Stotler’s two-run single, but the Villains tied it in the fifth and put the game away with a four-run sixth for a 9-5 win to force Game 3.

There were no pitch counts in 2010, but there were innings limits. A pitcher could throw no more than 12 innings in a 72-hour period.

Having thrown seven innings Thursday, Hallock could be used for only five. Gambill had just thrown over 100 pitches in the first game of what was now a doubleheader.

Wellborn gambled and started junior Kinston Broome, hoping to get enough innings from him to bridge the game to Hallock.

Pitching for the first time in a month, Broome gave up four runs in two innings, and Bishop McGuinness led 4-1 entering the bottom of the fourth inning.

Matt Rembielak got the win in Game 2 with two innings of relief, and he started for the Villains in Game 3, allowing only Hallock’s solo home run through the first three innings.

But the Blackhawks exploded for six runs in what would be a game-changing fourth. Ethan Church singled home two runs, and Stotler drove in another with a groundout to tie the game. Two batters later, Gambill hit a three-run home run to right-center, his only homer of the playoffs.

Freshman Will Shepherd also homered for West Wilkes, and Grafton Church drove in a run with a groundout, giving him nine RBIs in the three-game series.

After catching the first two innings, Hallock relieved Broome in the third and held the Villains to two runs on five hits.

“Logan came in and shut us down,” Glen Hunt, Bishop McGuinness’ coach, said after Game 3. “He’s had our number, but that guy’s a gamer…. It got to the point where we had to outhit them, and that’s tough to do with that bunch.”

And Gambill added, “I know (Hallock’s) arm was sore, hurting a little bit, but he gutted it up and played his heart out and got the job done.”

Hallock struck out Rembielak to end a 9-6 win, the Blackhawks’ 15th win in the last 18 games, setting off a celebratory dogpile at the pitcher’s mound.

The win put West Wilkes in the state championship series for the second time in school history and the first time since 1987.

A three-year starter at second base, Ethan Church was the infield’s veteran and put the moment into perspective.

(Coming in part three—West Wilkes faces Dixon with a state championship on the line.)

NCHSAA 1A baseball playoff bracket from the 2010 postseason

A few thunderstorms in the evening. Mainly clear skies after midnight. Low 68F. Winds light and variable. Chance of rain 40%.