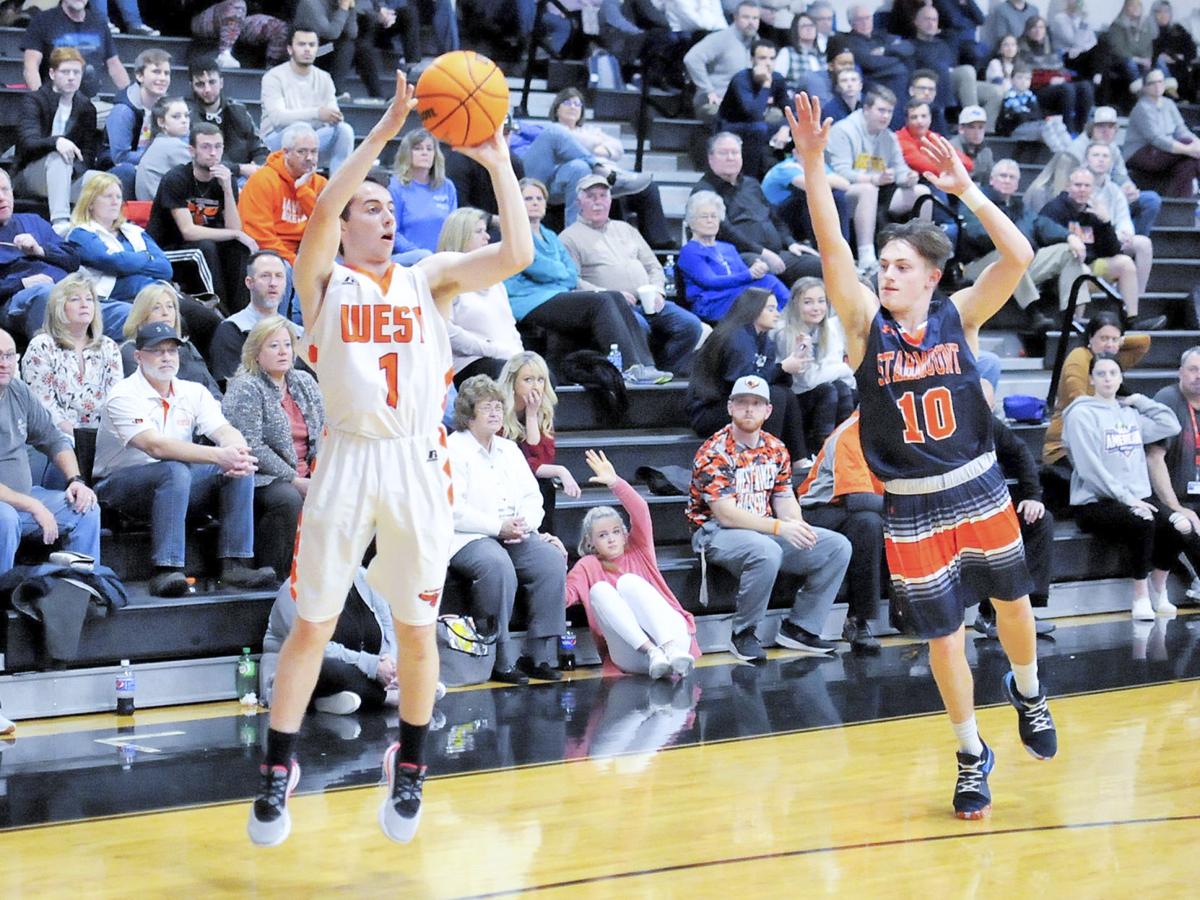 DAWSON OSBORNE puts up a 3-pointer against Starmount’s Alex Armstrong in the second half of West Wilkes’ win on Tuesday. Osborne hit a quartet of 3-pointers to finish with 12 points off the bench. 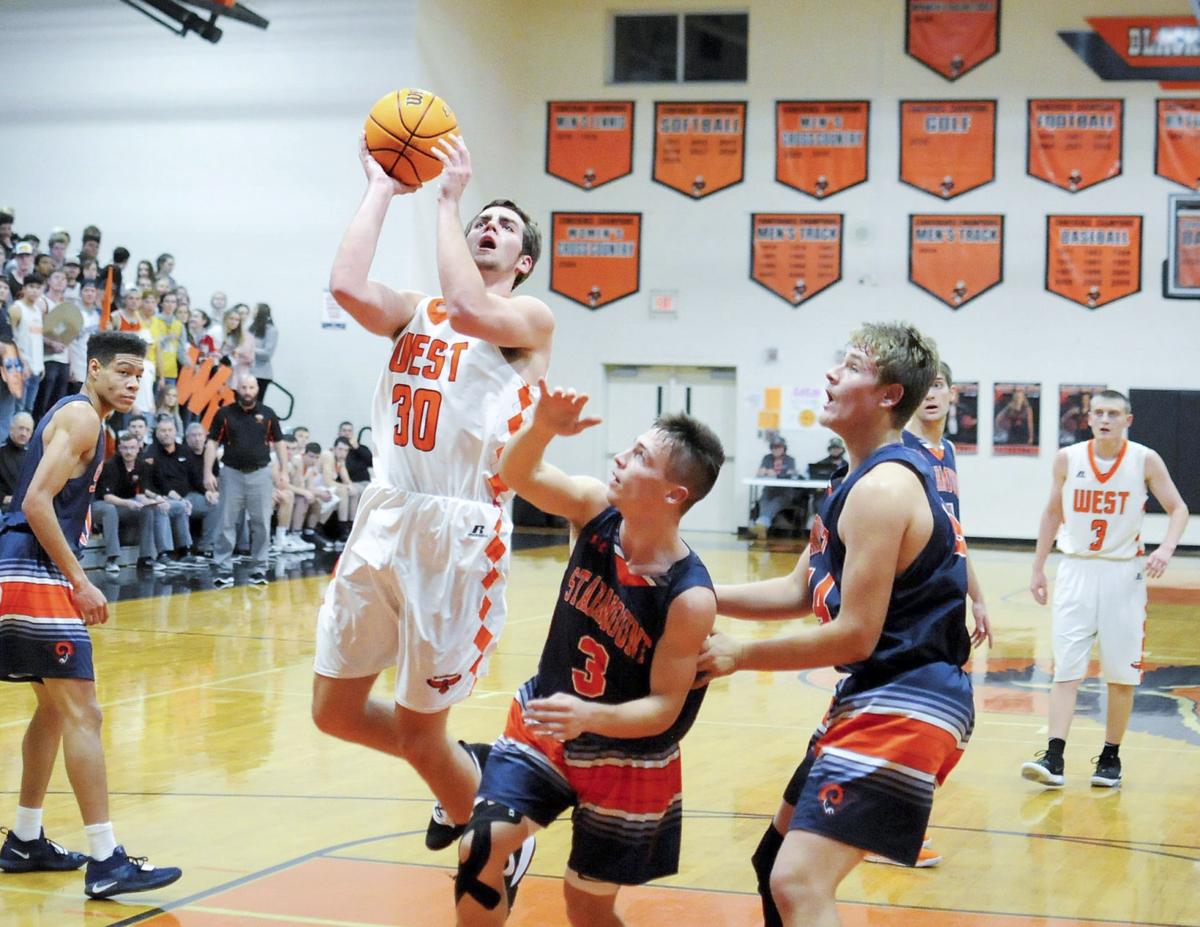 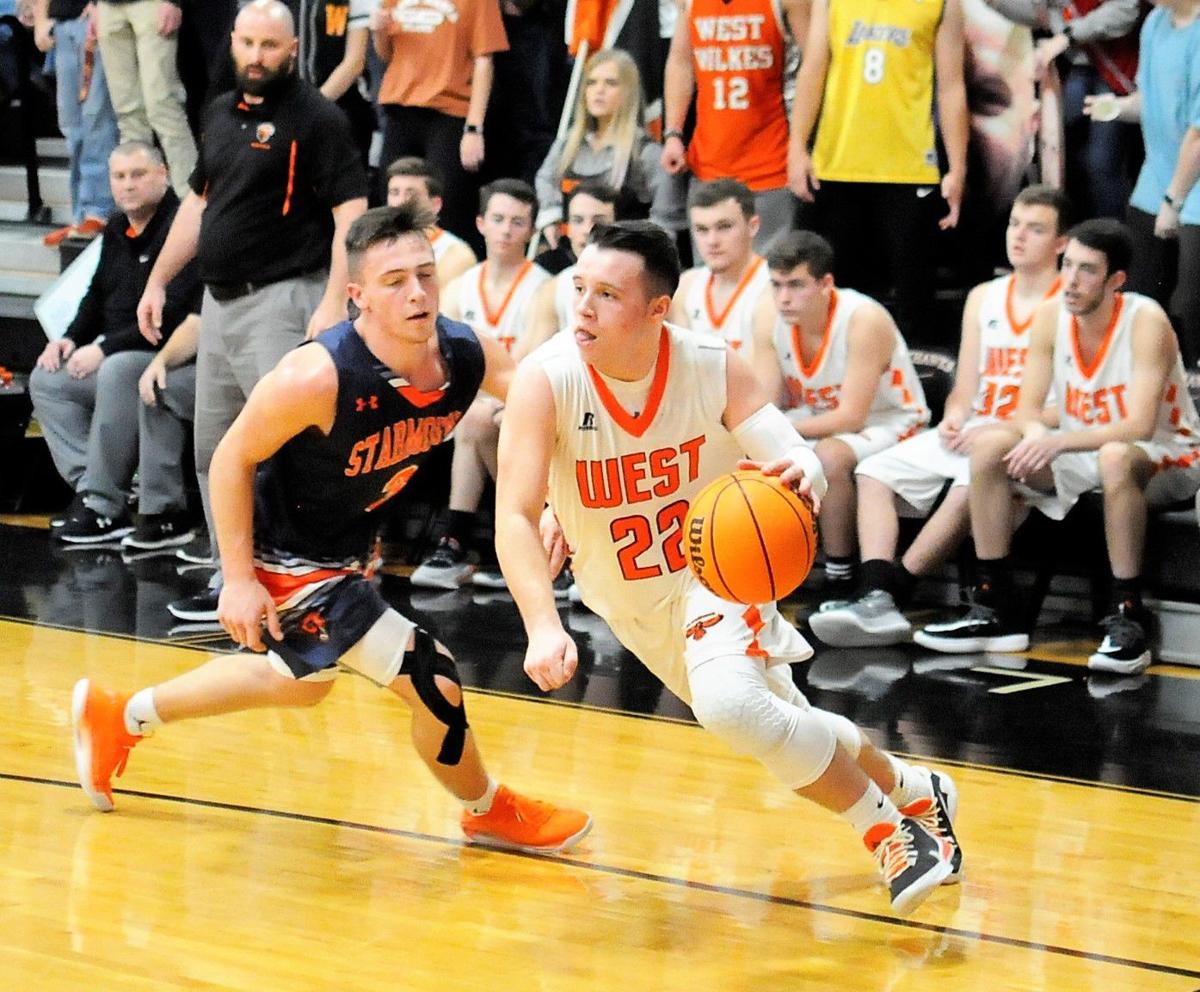 Jaden Wentz drives to the basket in the second half 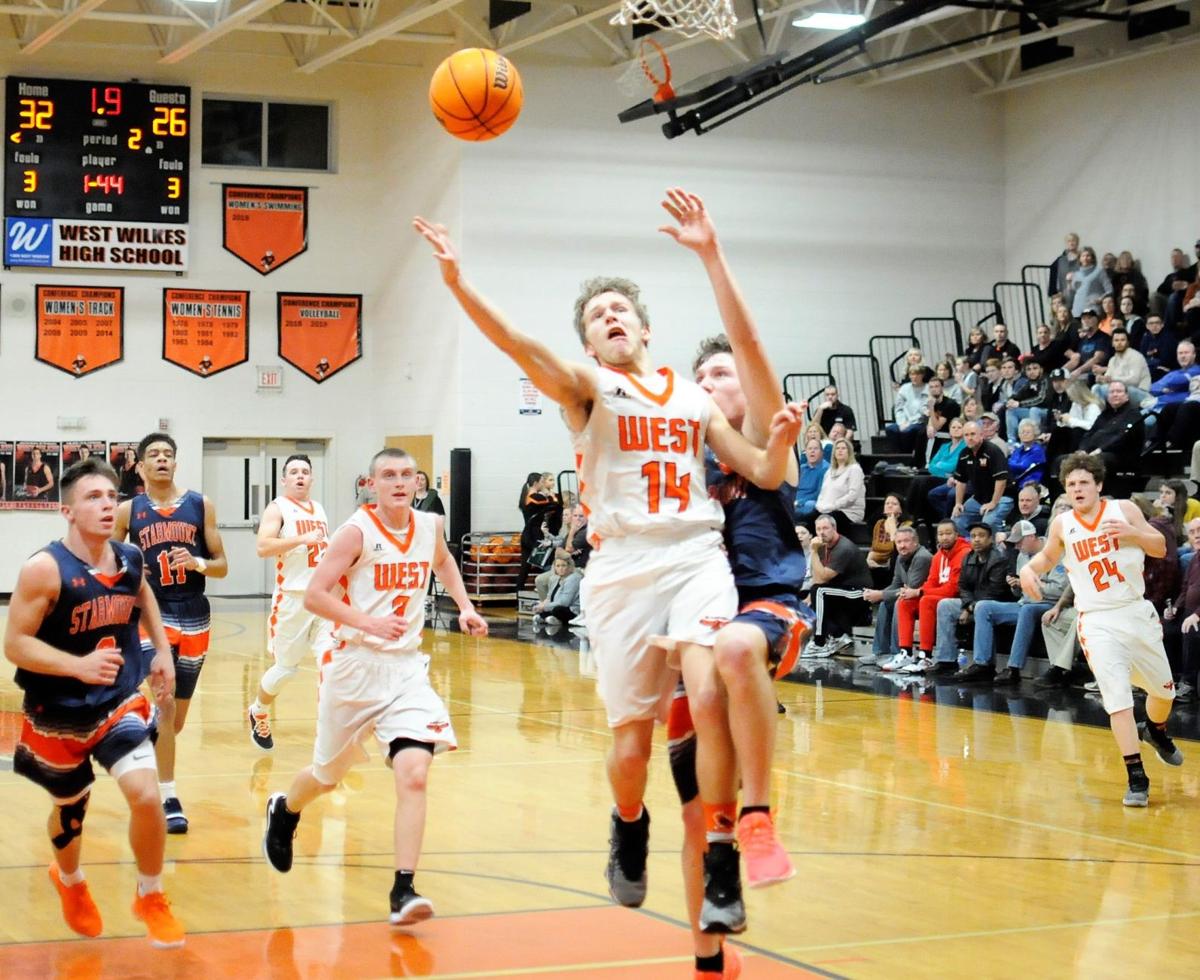 Austin Triplette beats the second half buzzer with this layup in West Wilkes' win over Starmount on Tuesday night.

DAWSON OSBORNE puts up a 3-pointer against Starmount’s Alex Armstrong in the second half of West Wilkes’ win on Tuesday. Osborne hit a quartet of 3-pointers to finish with 12 points off the bench.

Jaden Wentz drives to the basket in the second half

Austin Triplette beats the second half buzzer with this layup in West Wilkes' win over Starmount on Tuesday night.

And the bad news for the rest of the league is that team may be getting better.

A huge fourth quarter run was the difference in Millers Creek Tuesday night as the still-league-perfect West Wilkes Blackhawks pulled away from visiting Starmount 71-58 in a battle of the MVAC’s last two unbeaten teams.

The Blackhawks are now 4-0 in league play, and 8-4 overall. The margin of victory in those four conference contests has grown — two points, one point, six points and 13 points Tuesday night — despite the schedule getting relatively harder (West’s last two league wins came over the teams currently in second and third place).

Defense has been a key component in West’s run to the top of the standings and Head Coach Scottie Greene gave credit to his team and staff for their defensive growth.

“The boys play hard,” said Greene afterwards. “And they’ve bought into the scheme the coaches have implemented. Our defense is the work of Coach (Dale) Brown, who is responsible for the type of defense we play. It’s all his doing.

“Our practices are really tough, and the level of competition we have helps us continue to improve. Honestly, I get zero credit for it. It’s all on the staff and the players.”

The continued growth of senior post Jackson Stinson is another important cog in West’s hot start. Stinson led all scorers with 20 points Tuesday and outplayed his counterparts in the paint on both ends of the court.

But Stinson wasn’t alone Tuesday. Greene was quick to point out that eight different Hawks scored, including Dawson Osborne and Jacob Brown, who each poured in 12 points.

“It’s a team win. It’s never one person with us,” said Greene. “Jacob is our floor general. I don’t think he came off the floor tonight. We executed our offense and got Dawson some good looks, and he buried four 3-pointers. Jackson has been playing very well lately. All the guys who got in contributed.”

The Blackhawks enjoyed an eight-point lead at the break, at 34-26, after a transition layup at the halftime buzzer from Austin Triplette, who received a pretty outlet pass on the basket from Jaden Wentz.

But the Rams, who fell to 3-1 in the MVAC and 8-5 overall, battled back to cut the deficit back down to three, at 50-47, thanks to a runner at the third quarter buzzer from Trey Dezern.

Starmount also scored the first basket of the final frame. Freshman guard Xavier King stole the ball in the half court and raced down the floor for the easy bucket and suddenly the margin was only one point.

But West Wilkes responded with one of Osborne’s three triples in the final eight minutes. Osborne sank the trey from the right wing to extend the lead back to four and that hoop was quickly followed by a Stinson jumper from the left for the 55-49 score.

In fact, Osborne’s basket ignited a game-deciding 17-4 run — capped by a nifty turn-around on the right box from Stinson – that all but put the visitors away. Two more from deep from Osborne were at the heart of the run, and Starmount would inch no closer than nine points the rest of the way.

Dezern led the Rams with 15 points in the loss, and Budda Johnson added 14.

Next up for the Blackhawks is a road trip to cross-county rival North Wilkes tonight, followed by another road match Wednesday against Alleghany. Greene knows that will be a tough stretch for his squad, which has now won six games in a row.

“We just have to stay hungry and stay humble,” said Greene. “We have to continue to focus on one game at a time,and we have to make sure we improve every day in practice. If we do, good things will continue to happen.”

Starmount, meanwhile, will try to rebound tonight in the MVAC with a game against Wilkes Central in Boonville. Both teams have one conference loss now after Tuesday’s action, so a win tonight will be vital in keeping pace with the Blackhawks.

West Wilkes also claimed the night’s JV contest, 59-24 over the Rams. Logan Wayne led the way with a game-high 16 points as 12 Blackhawks scored at least a point. Zack Dezern scored seven in defeat for the Rams.