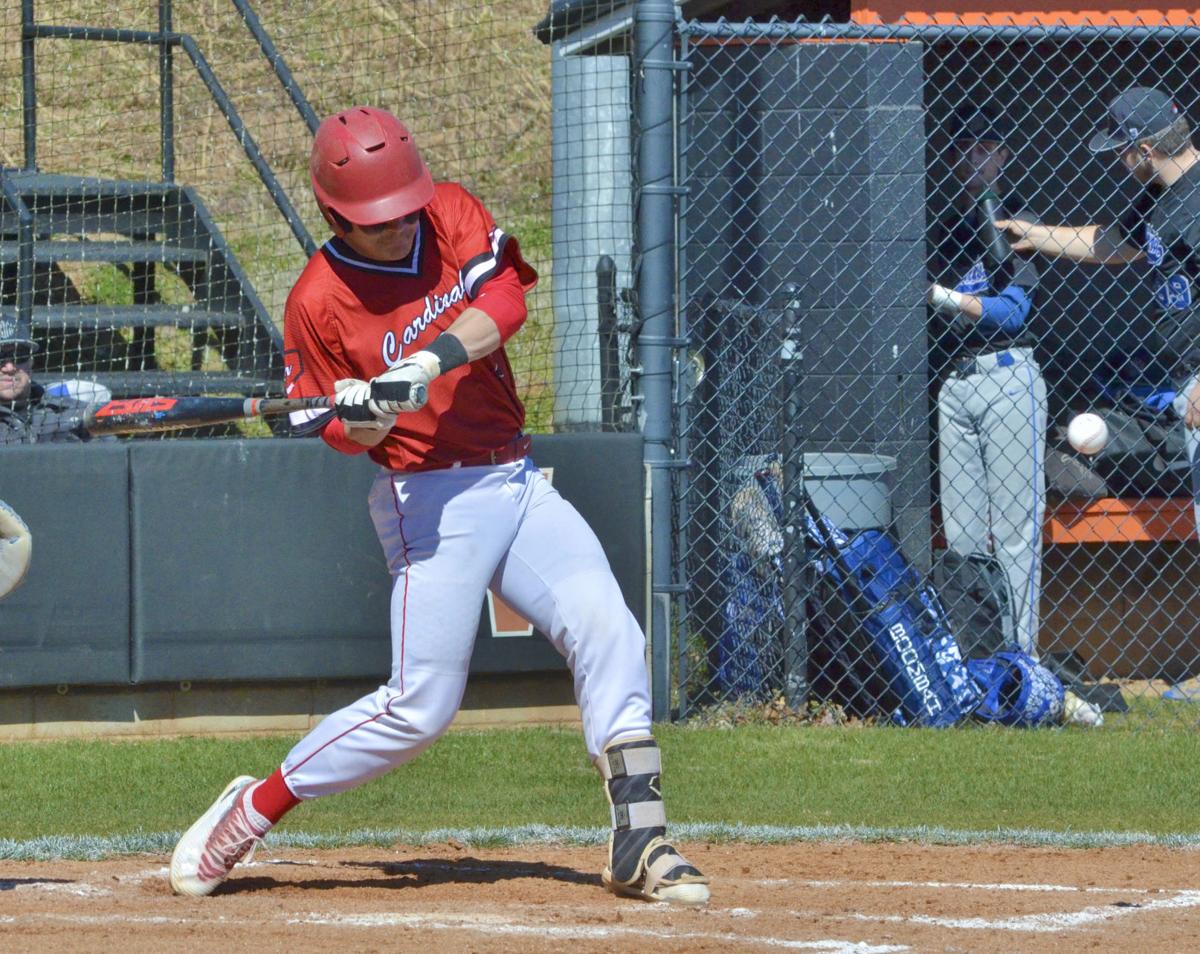 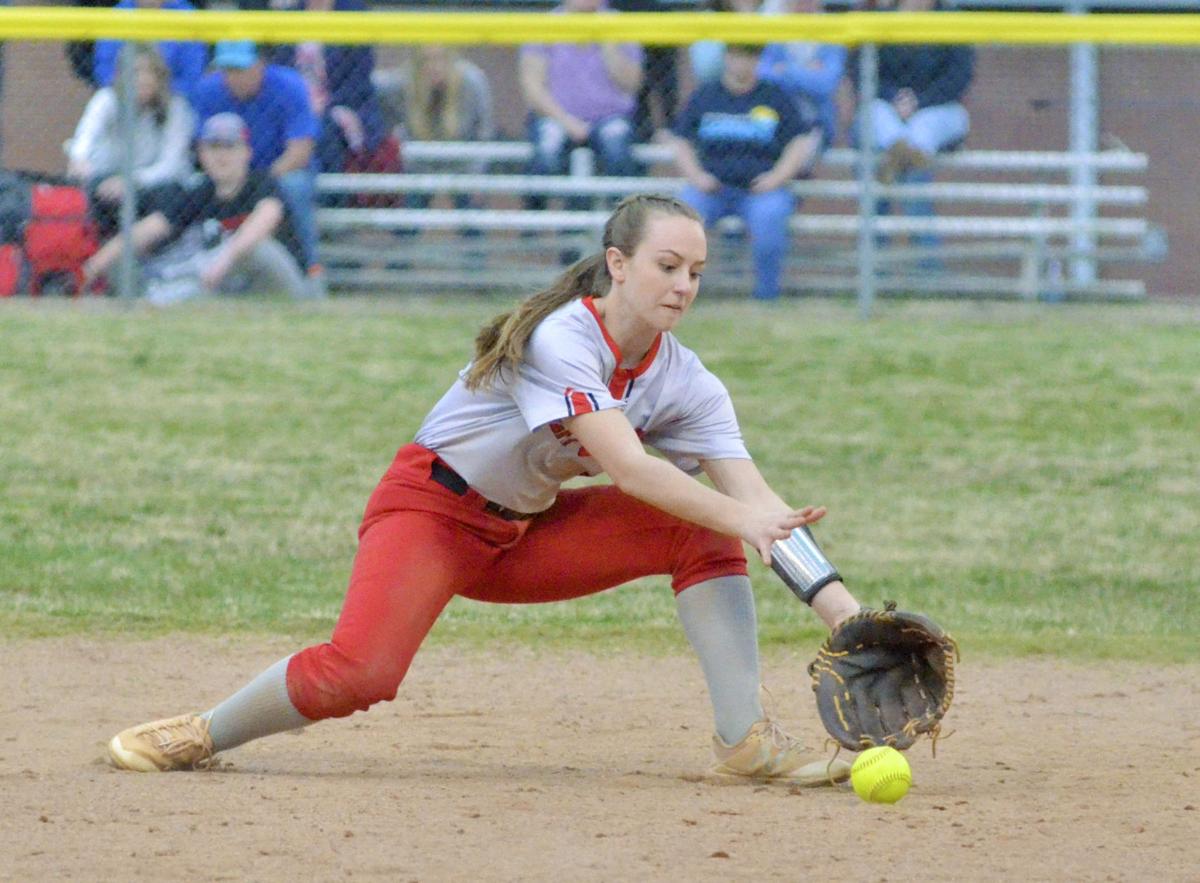 KRYSTA PREVETTE fields a grounder at second base in the third inning of East Wilkes’ game against South Caldwell on March 12 — the day before all NCHSAA events were suspended. 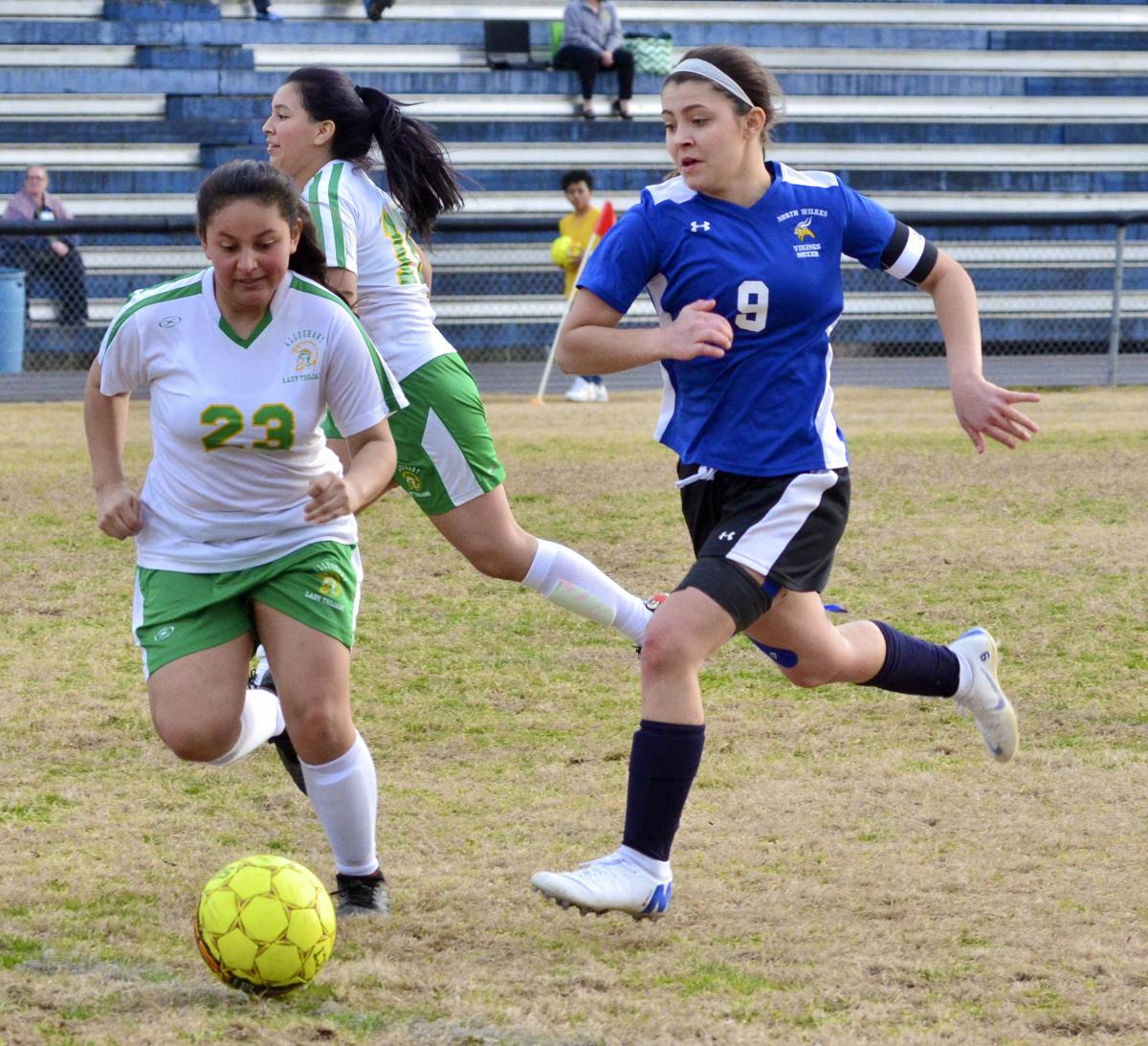 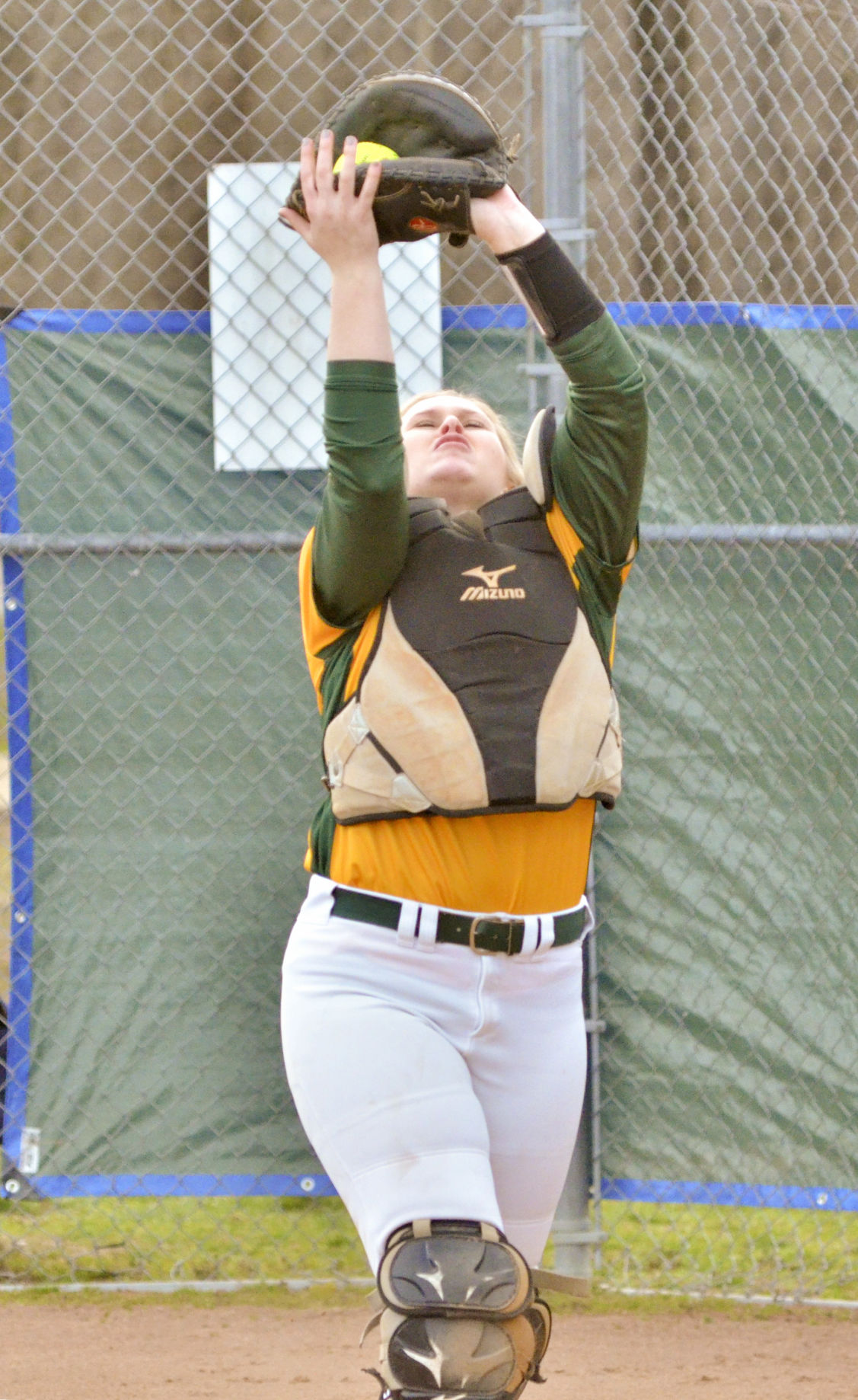 WILKES CENTRAL CATCHER Madison German hauls in a popup, in foul territory, during the Eagles’ win over Hibriten earlier season. 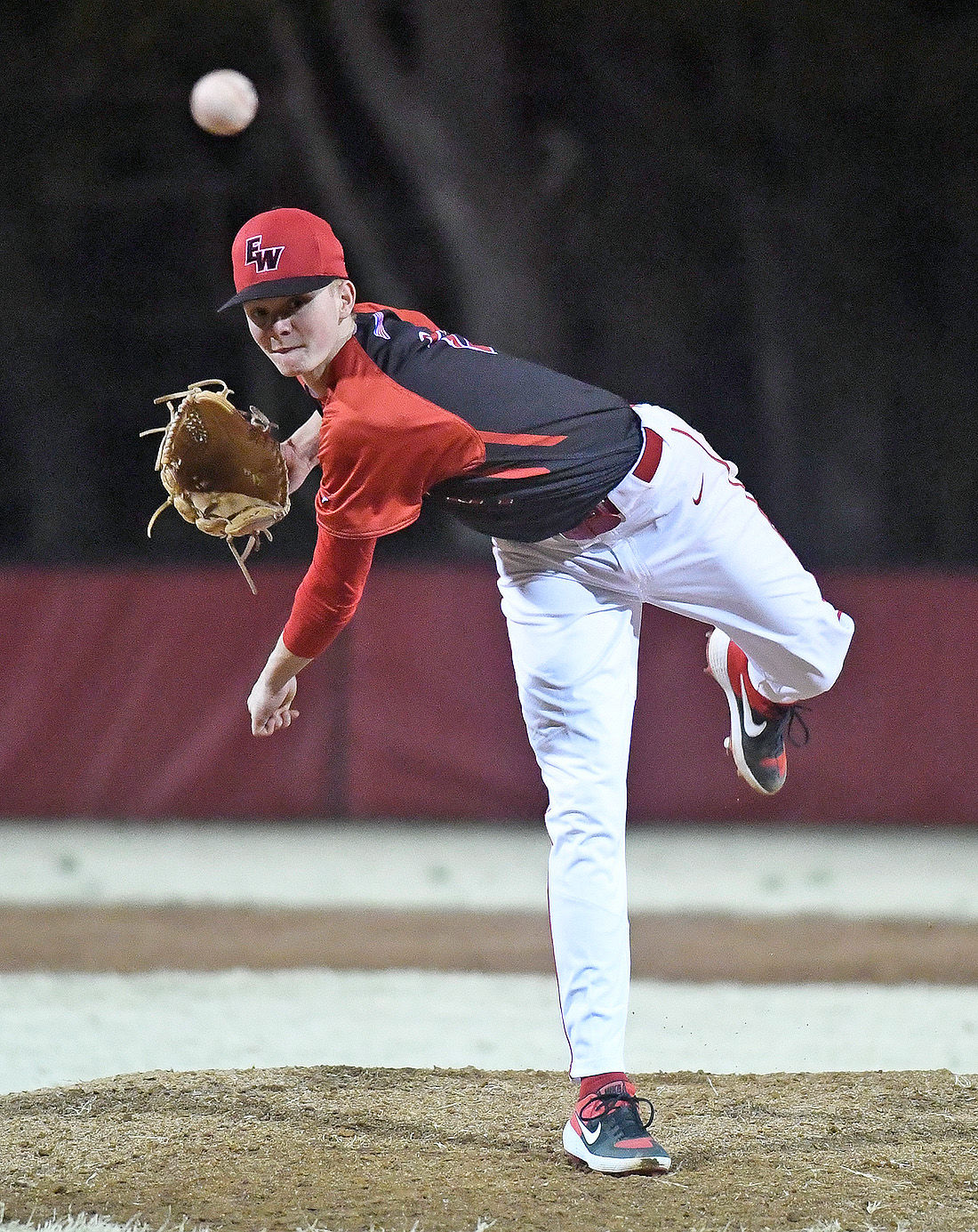 Pitching for the first time in nearly a year, East Wilkes’ Trey Lambert struck out eight and walked only one against North Stokes. He gave up three hits, but three of the four runs he allowed were unearned.

KRYSTA PREVETTE fields a grounder at second base in the third inning of East Wilkes’ game against South Caldwell on March 12 — the day before all NCHSAA events were suspended.

In high school athletics, there are no redshirts, no extra years of eligibility.

Senior student-athletes across Wilkes County are currently dealing with that concept and the uncertainty of whether they’ll be returning to school this year, or if they’ll be able to continue their spring sports seasons.

The original announcement of the suspension of spring sports was made on March 12 — with the beginning of Mountain Valley Athletic Conference play for both baseball and softball, scheduled last Tuesday, March 17.

For many athletes, like West Wilkes’ Eli Stone, this spring was going to be an opportunity to add to the Blackhawks’ already-rich baseball tradition.

Stone started at third base and helped the Blackhawks win their third-straight MVAC title last spring and the 16th in school history.

But during this suspension, Stone continues to work on his craft any way he can so he can be ready if the season is resumed.

“My initial reaction when I heard the news was just complete shock. I wasn’t really sure what to think and it still hasn’t fully set in,” said Stone. “Then during this break, I have just been trying to stay focused by going to the gym, going to the cage and throwing and taking ground balls on the field.”

Prevette and Caudill were excited to be the senior leaders for the Cardinals this spring after helping the team make the third round of the 1A state playoffs last year. Both athletes were also members of the East Wilkes volleyball squad.

“This was supposed to be my senior season, God had other plans,” Prevette said in a post on Facebook. “My senior year was cut short, but thank you to my coaches and teammates for an amazing four years.”

Despite the suspension Caudill stated that she “usually tries to throw every day and work fundamentals for softball.”

“I was very upset because this was supposed to be the best year of my high school career and it’s like it’s been snatched from right in front of me,” said Caudill.

Wilkes Central softball player Madison German was excited about playing a sport she’s had a passion for almost 15 years one more time this spring.

German, an All-MVAC honorable mention selection last year, had a goal of making her third All-MVAC team this school year, having already earned the honors in both volleyball and girls basketball.

When the news of all NCHSAA events being suspended initially until April 6, German tried to remain optimistic. But with the most recent news of school now closed until May 15, staying optimistic became a bit harder.

“My first reaction was a deep feeling of sadness. This is my senior year and I wanted to play the game I love one last time and make as many memories as possible. I have been playing the game of softball since the age of 4, and having this sport taken away from me is heartbreaking,” said German. “However, at first, I wanted to stay positive and hope sports will resume as soon as possible. With school now cancelled until May 15, I’m not sure if I’ll ever be able to lace up my cleats, hit another home run, put on my catching gear, or wear jersey number 15 ever again.

“This truly breaks my heart. Softball has taught me so many life lessons and it has come to an end too soon.”

When asked what she’s been doing to stay in softball shape during the suspension, German has been going solo with her practices.

“To stay sharp during this long break, I have been practicing on my own,” said German. “I have my own personal hitting station set up in my basement where I practice my hitting skills. I also just like to go throw in the yard during my free time. I cannot wait to be able to play the game I love again.”

East Wilkes baseball teammates, and at times, battery mates Caeden Howell and Trey Lambert had similar reactions when they found out their seasons had been put on hold. Both players were also members of East’s football and boys basketball teams.

And that reaction was one of shock as the reality started to set in after the Cardinals’ final team practice on March 12 — less than 24 hours after picking up a 3-2 win at home over Triad Math and Science Academy.

“I honestly didn’t know what to think. I was just like ‘wow this could possibly be my last practice in high school.’ It’s just hard on all the seniors who work so hard for their senior year to not be able to play,” said Lambert. “Also the uncertainty of knowing if we will be able to play again is really stressful. All we can do now is hope and pray that we may get the opportunity to play the games we love.”

For Lambert, senior year was one with high expectations for him after his junior season was cut short due to injury. Before an elbow injury sidelined him for the final month of the regular season, Lambert had thrown three-straight no-hitters.

During this break, Lambert is finding ways to stay sharp as he hopes to earn a scholarship as multiple colleges have shown an interest in him.

“During this break we’ve had, I’ve been hitting, throwing pens and lifting. There may be a stoppage of team practices and games but that doesn’t mean we stop getting better,” said Lambert. “The main thing I’ve done is just trying to fix the small things and work on technique.

“This break definitely doesn’t help my chances of receiving a scholarship. It’s very stressful not knowing where I’m going to attend college this late in the year,” added Lambert. “All I can do now is just get better, weigh out my options and see what happens. God has a plan, it’ll all work out in the end.”

Howell, who has been the Cardinals’ starting catcher since the middle of his freshman season, has plans to continue playing beyond high school.

Howell recently committed to play baseball for St. Andrews University in Laurinburg but quickly realized the severity of the situation and is doing whatever he can to stay sharp.

“My reaction to the games getting cancelled was more of a shock thing,” said Howell. “Once I realized we couldn’t change anything, I just thought about how I should work on everything I could, so I could stay ready for when we came back. So, I would go hit at places like Cub Creek and at friend’s houses and then I would throw every day so my arm would stay in shape.”

Morgan Tribble, a multi-sport athlete at North Wilkes, was looking forward to playing a sport she loves with her friends one last time before graduating later this spring.

Tribble, a two-year team captain on the girls soccer team, was also excited to build off her 18-goal performance last spring and potentially become a three-time All-MVAC performer.

The Vikings had won their last two matches after coming up short in the previous three.

Tribble also stated that during this time of quarantine that she’s been running on the greenway and various other trails across the county to stay in shape.

She’s also stated that she’s “met up with a few girls at Rivers Edge to shoot around and make sure that we do not lose our touch during this break.”

“My initial reaction to the announcement that sports have been put on hold was shock. I could not believe that our senior sports season may be put on pause for quite sometime, after we were just beginning to connect on the soccer field,” said Tribble. “I was also devastated, not only in regards to my own senior season coming to an abrupt halt, but also for my fellow seniors who have also put in copious amounts of time and hard work to become the athletes they are today.

“With this news, my fellow seniors and I can only be hopeful that we may get to play the sport we love one last time before ending this chapter of our lives.”

Cloudy with showers. Low near 45F. Winds light and variable. Chance of rain 40%.

Some clouds early will give way to generally clear conditions overnight. Low around 35F. Winds WNW at 10 to 15 mph.