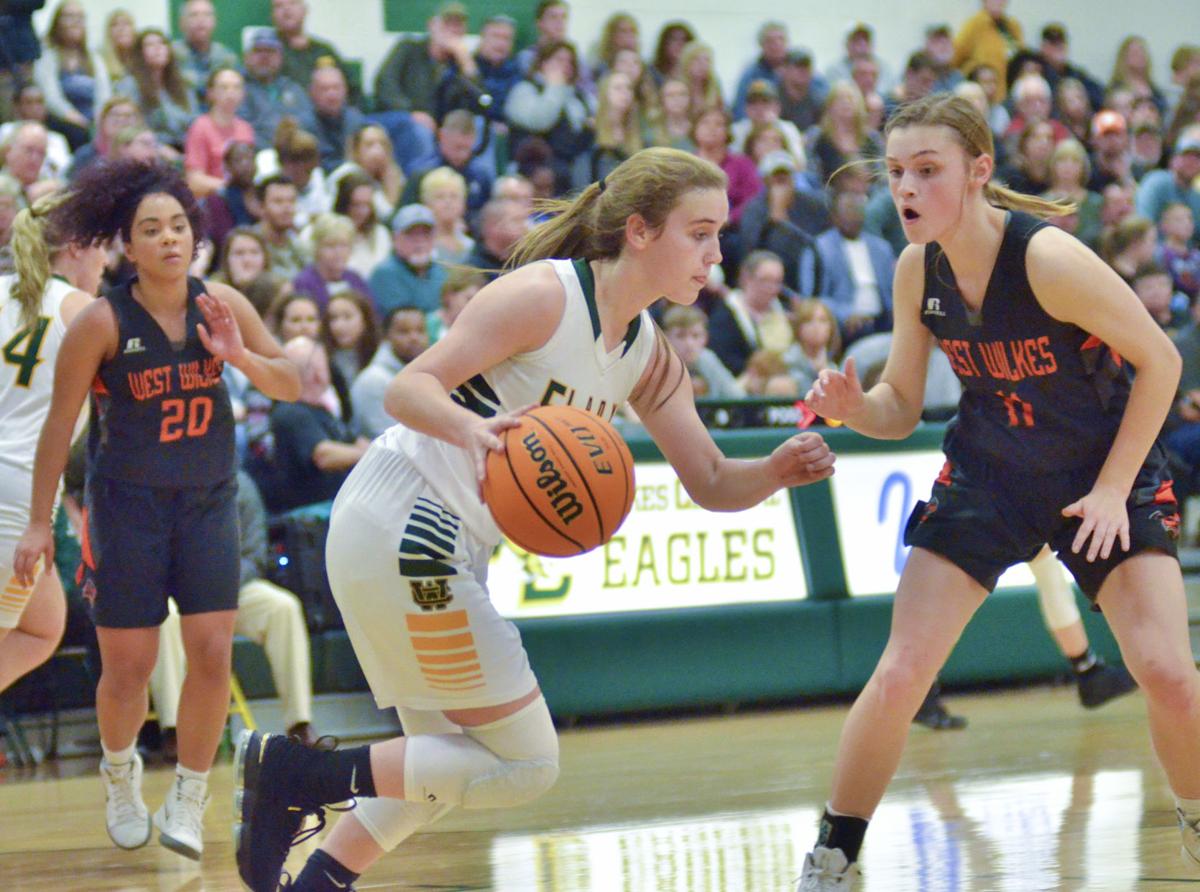 MAKENNA FREEMAN attempts to break West Wilkes’ full-court press while being guarded by Parker Childress, of the Blackhawks, in Wilkes Central 61-50 win against West Wilkes on Friday night. 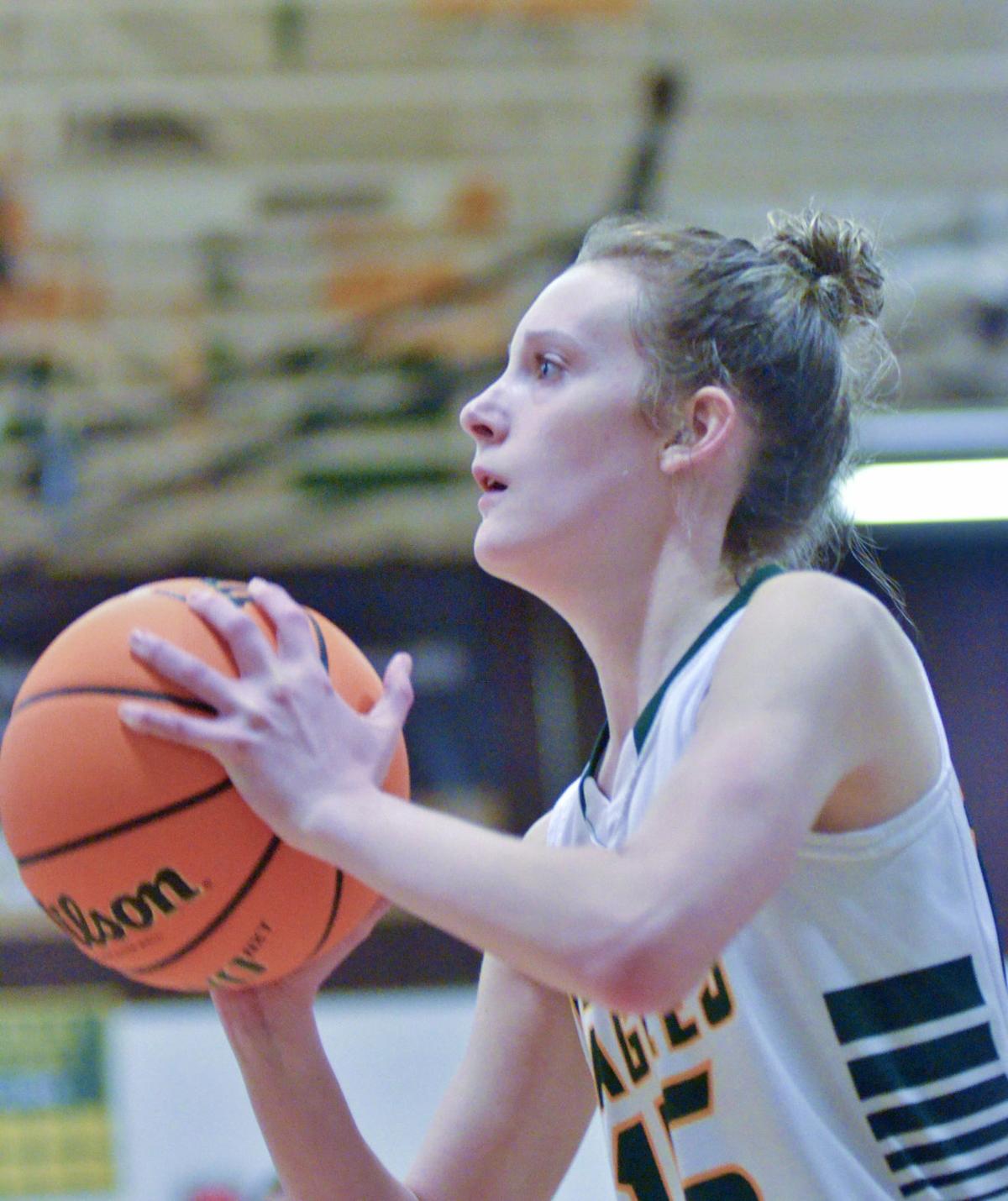 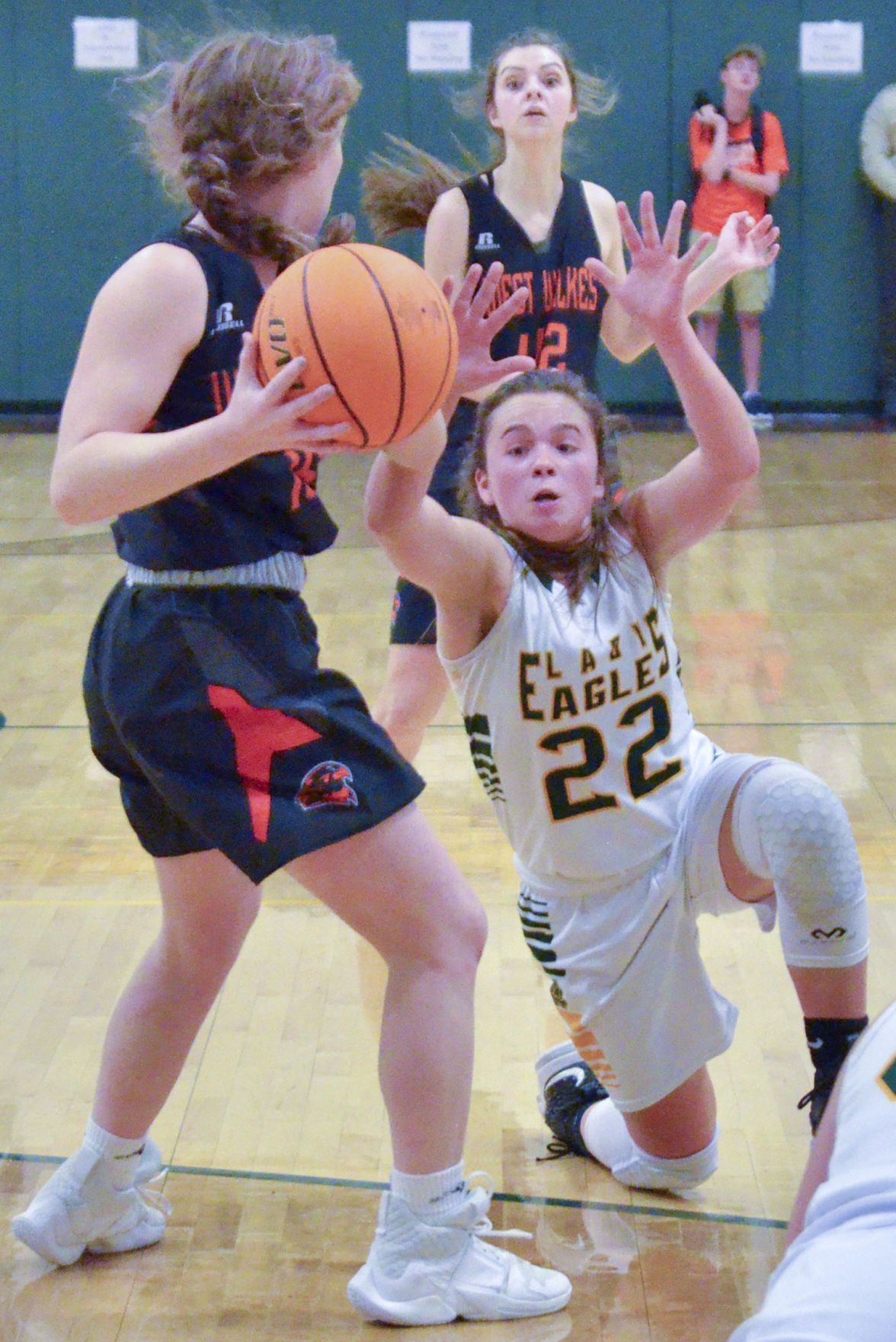 Wilkes Central's Zoe Susi goes for a steal, during a scrum, against West Wilkes' Kendall Stanley.

MAKENNA FREEMAN attempts to break West Wilkes’ full-court press while being guarded by Parker Childress, of the Blackhawks, in Wilkes Central 61-50 win against West Wilkes on Friday night.

Wilkes Central's Zoe Susi goes for a steal, during a scrum, against West Wilkes' Kendall Stanley.

As cliché as it may sound, Friday night’s girls basketball game between Wilkes Central and West Wilkes truly was a tale of two halves.

But it was the Eagles’ big second half that proved more effective in a 61-50 win over the Blackhawks in Moravian Falls.

Wilkes Central remains a half-game ahead of Alleghany and Ashe County in the Mountain Valley Athletic Conference standings at 3-0. But things did not look too good early as the Eagles (9-2) trailed by as many as 10 in the first half.

“I told them before we went out that this game will come down to who wants it the most, so when we came back in at halftime, I told them ‘remember what I told you before we went out, it’s about who wants it the most, and right now, they want it a whole lot more than we do,’” said Wilkes Central Head Coach Greg Davenport. “I told them it was just all about heart and that they had to go back out there and play their tails off and they did.”

The Eagles looked rejuvenated coming out of halftime with a 9-2 run.

First, Zoe Susi and Madison German connected on a pair of baskets and then Erica Wyatt, who paced the Eagles with 17 points, hit a 3-pointer.

Then Susi found German on a backdoor cut to trim West’s lead to 28-25.

German scored 13 of her 16 points in the second half but it wasn’t until after the game that she realized how many she had.

“I wasn’t really trying to score, I was just doing the best for my team and do what I could to help us win,” said German. “West Wilkes is our biggest rival and I really wanted to win, so I knew I had to step it up and the team seemed to follow my lead and started scoring points.”

The Eagles took control in the final minute of the third quarter. Baskets from Karlie Anderson and Jacklyn Richardson made it a one-possession game.

Susi then gave Central its first, and only, lead of the game (39-38) in the final seconds with an old-fashion 3-point play.

The sophomore’s basket was part of a 15-1 Eagles run — highlighted by 3-pointers from Wyatt and Makenna Freeman.

“I thought it was a pretty big run because it was kind of our first breakaway that we had and that really got us going,” said Susi, who scored all seven of her points in the second half. “At halftime, I think we realized that we couldn’t give up and we’ve come back for other games and we just had to dig down and keep playing.”

As the Eagles started to heat up, the Blackhawks went cold from the field, going more than six minutes without a basket.

Kendall Stanley finally broke the drought with a basket to trim the deficit to 49-41.

“There was a time spell in the third quarter where we got some fouls and timing-wise, it hurt us, player-wise it hurt us and it just got us out of our rotation,” said West Wilkes Head Coach Allie Greene. “I think right there, and the middle part of the third, is where things changed and we’ve got to do a better job managing our game plan even when calls don’t go are way.”

Carson Ledford cut Central’s lead to 53-48 with 1:15 to play and West had a chance to make it a one-possession game after an Eagle turnover.

But the Blackhawks couldn’t capitalize as they were called for a five-second inbound violation. The Eagles put the game out of reach in the final minute behind a Sarah Lowe basket and free throws from Wyatt and Susi.

Behind the one-two combo of Ledford and Parker Childress, West Wilkes built a 26-16 halftime lead after the freshman Childress hit a runner in the lane.

Ledford led all scorers with 20 points and Childress added 11 but no other Blackhawk registered more than four points.

“We came out hot in the first half; we played some good basketball, hit some easy shots, hit some outside shots, did a good job on the boards,” said Greene. “Second half, we did not rebound well at all, especially on the defensive end and got in some foul trouble. We let some of that affect our game plan mentally and we missed a ton of easy shots around the basket and you can’t miss easy shots like that against a top team in the conference.”

Notes: Lowe added eight points (all in the second half), for Central, which will host Alleghany tonight (that game has now been postponed, make up date has yet to be announced). West returns to the court tonight against Starmount. In the JV game, Wilkes Central pulled out a 33-31 win over the Blackhawks. Ryleigh Parker paced the Eagles (7-1, 3-0) with a game-high 15 points and Jayla Smoker added 12. West Wilkes (3-2, 2-1) was led by 10 points from Tori Teague and eight from Lexie Huffman.