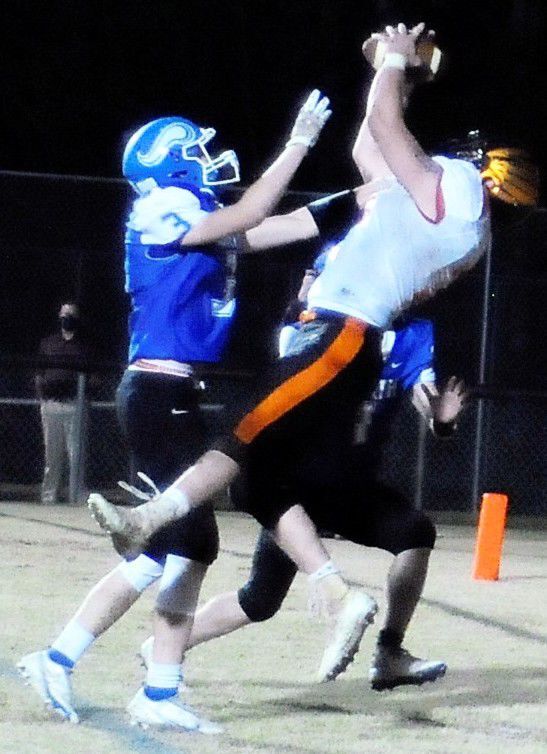 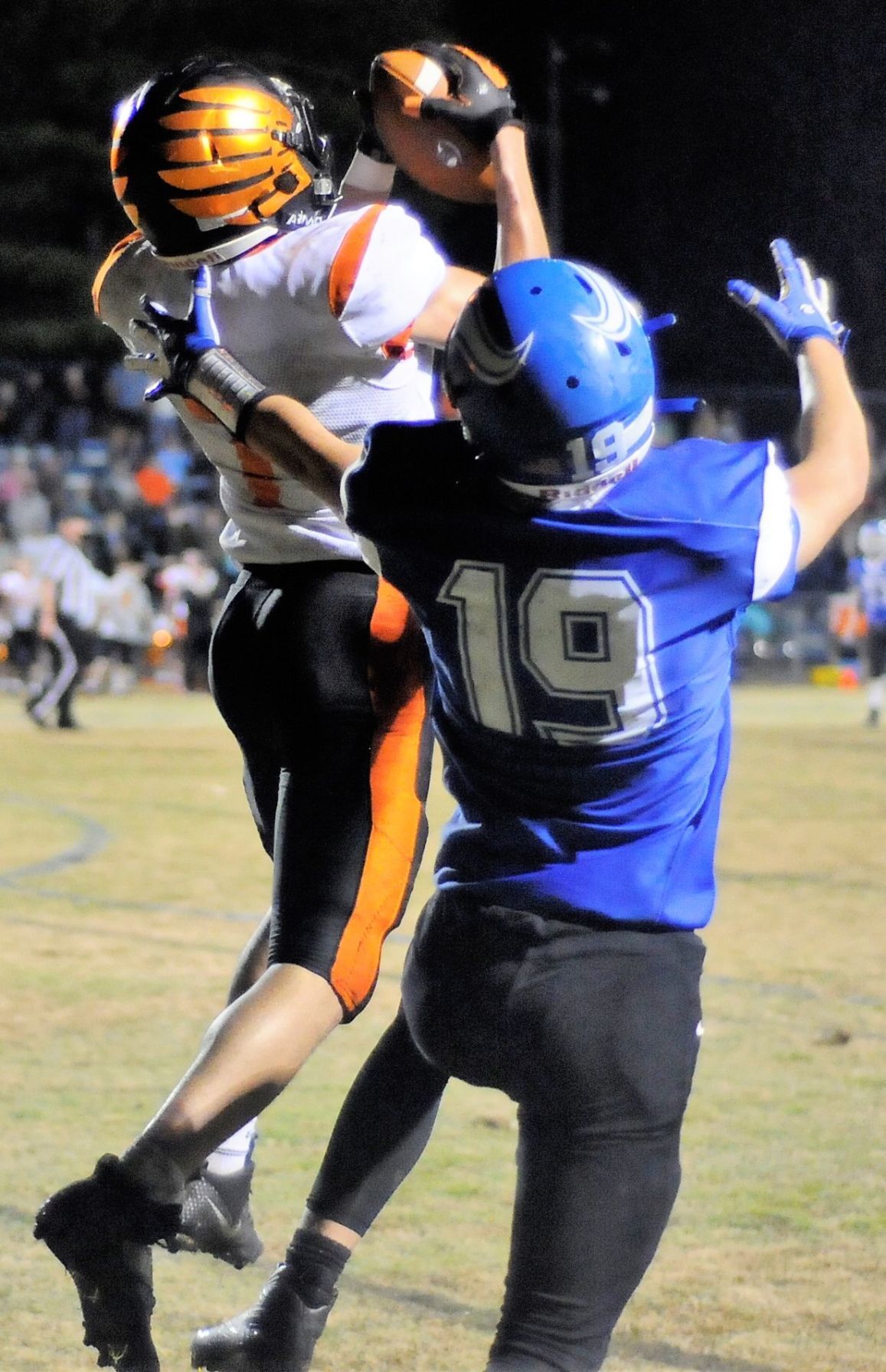 This Zach Wyatt pass attempt to Will Harrold near the left pylon is intercepted by West’s Jaheim McDougald with 38 seconds left on the clock, preserving West’s 31-27 win Friday at North Wilkes.

This Zach Wyatt pass attempt to Will Harrold near the left pylon is intercepted by West’s Jaheim McDougald with 38 seconds left on the clock, preserving West’s 31-27 win Friday at North Wilkes.

After averaging less than a touchdown offensively over its last four games, West Wilkes needed a jolt to have a chance to end its season with a win.

The jolt came at halftime of the Blackhawks’ 31-27 victory over county-rival North Wilkes Friday night in Hays, as intermission adjustments paved the way for the Mountain Valley Athletic Conference victory.

Down 14-7 after one half (and with those points coming off a defensive touchdown), the Blackhawks sped up the tempo and found potent combinations in quarterback Logan Wayne and receivers Braxton Church and Jaheim McDougald.

The result was a relative offensive explosion — 24 points after the half, with each and every one of them necessary to slip past a Vikings squad hoping to celebrate senior night at Raner Wiles Stadium in style.

“We game in with a game plan, but we struggled up front against their pressure,” said West Coach Phil Collett, whose team ended the strange spring season with a 3-4 mark.

“So we decided to try and spread their defense out a little bit, and go up tempo. We hoped that could limit what they could do a little bit as far as switching people in and out. And once we got them committed to a base defense with the up tempo look, it was a little easier to call plays.”

“I think we got a little gassed as the game went on,” said North Coach David Wojtecki. “We were able to put a lot of pressure on them early, but as the game progressed their kids up front were able to give their quarterback more time to make plays.”

The Hawks also found some soft spots in a Vikings defense that had held West Wilkes to one first down in the game’s first half, spots that allowed Wayne to find Church and McDougald through the air.

“Give Coach (Neil) Walsh credit there,” said Collett. “He altered us that there may some spots open we could hit with post routes and hitch routes. And once we got a couple of completions, and a couple of first downs, we were able to get a little momentum.”

The Hawks found pay dirt on their first possession of the second half, the result of a long, 16-play drive that culminated in a gutsy call on fourth-and-goal from the Vikings 20. Wayne hit Church on the post around the 10, and Church broke a tackle at the 5 to plow into the end zone and tie the contest at 14-apiece.

But the Vikings answered swiftly with a quick-strike play on their next drive to regain the advantage, and again the play was on fourth down. North signal-caller Zach Wyatt hit Tryston Walker for a quick-hitter on the right. Walker found a seam down the sideline, and broke a tackle while maintaining his balance and keeping his knee from touching at around the West 40.

Walker, a senior, then cut back down the middle of the field and zoomed into the end zone, outracing the West secondary to put his team back up seven.

“This game meant a lot to our seniors, and it showed tonight,” said Wojtecki when asked about Walker’s effort on the play.

“Playing against West Wilkes was obviously part of it,” continued Wojtecki, “but honestly these kids have been going out all year and playing hard from first quarter to fourth quarter.”

The two teams then went back and forth until a 37-yard Wyatt run gave the Vikings a 27-24 lead with 7:14 left to play. But an unsportsmanlike conduct penalty against North on the score proved pivotal — the Hawks took the penalty on the ensuing kick-off, and a 25-yard return from Jared Minton helped set the visitors up with excellent field position.

Still, North Wilkes seemed to execute a stop on the subsequent West drive, as a pass from Wayne to Church was knocked down by Walker on fourth down. However, the Vikings were called for a roughing the passer penalty that gave West new life.

Three plays later, the Blackhawks took advantage, with Wayne finding Garrett Patrick for a 5-yard score. The 6’ 1” Patrick hauled in the pass at the back of the end zone, reaching over the Vikings’ defense, and helped give the visitors a 31-27 lead with 1:59 left to play.

With one more chance to grab the victory, the Vikings drove all the way down to the West 24, aided by a huge 33-yard completion from Wyatt to Will Harrold.

But on fourth-and-11, a Wyatt attempt to Harrold near the left pylon was intercepted by McDougald with 38 seconds left on the clock, and a subsequent kneel down by Wayne preserved the West win.

North Wilkes ended Wojtecki’s first season in Hays at 1-6, but the coach saw progress from day one.

“It was a difficult year for everyone, but the kids learned a lot,” said Wojtecki. “We introduced them to our expectations in the weight room, and at practice. And our seniors did a great job leading the way. Their leadership is going to be missed next season, but hopefully they’ve shown the younger kids how to conduct themselves going forward.”

Collett inherited a one-win team, and saw sharp improvement in year one.

“Our senior leadership was phenomenal,” said Collett. “Garrett Patrick, Seth Culler, Dylan Ball…all the older kids bought what we were selling, and they helped get the young kids to buy in, too. The quality of leadership the seniors displayed this season is going to help us find success in the future.”

NOTES: West’s lone first half touchdown came courtesy of lineman Gary Call, who intercepted a quick slant pass and rumbled 50 yards for six. “Coach (Robert) Johnson did a great job of getting the defense ready for that play,” said Collett…Wayne finished with 187 yards passing and two scores, and Church had 91 yards receiving and a touchdown to pace the Hawks…Ben Winters broke the 100-yard mark for the Vikings, gaining 103 for a 4.6 yards-per-carry average…North’s Bryson Gambill, an offensive lineman, made a catch off a tipped pass in the fourth…North recorded eight sacks on the night, led by three from senior Cody Shumate…Wyatt had over 200 yards of total offense Friday, including 144 through the air...Jarrett Minton scored in the third quarter on a rushing touchdown for West.

A few clouds from time to time. Low 44F. Winds light and variable.