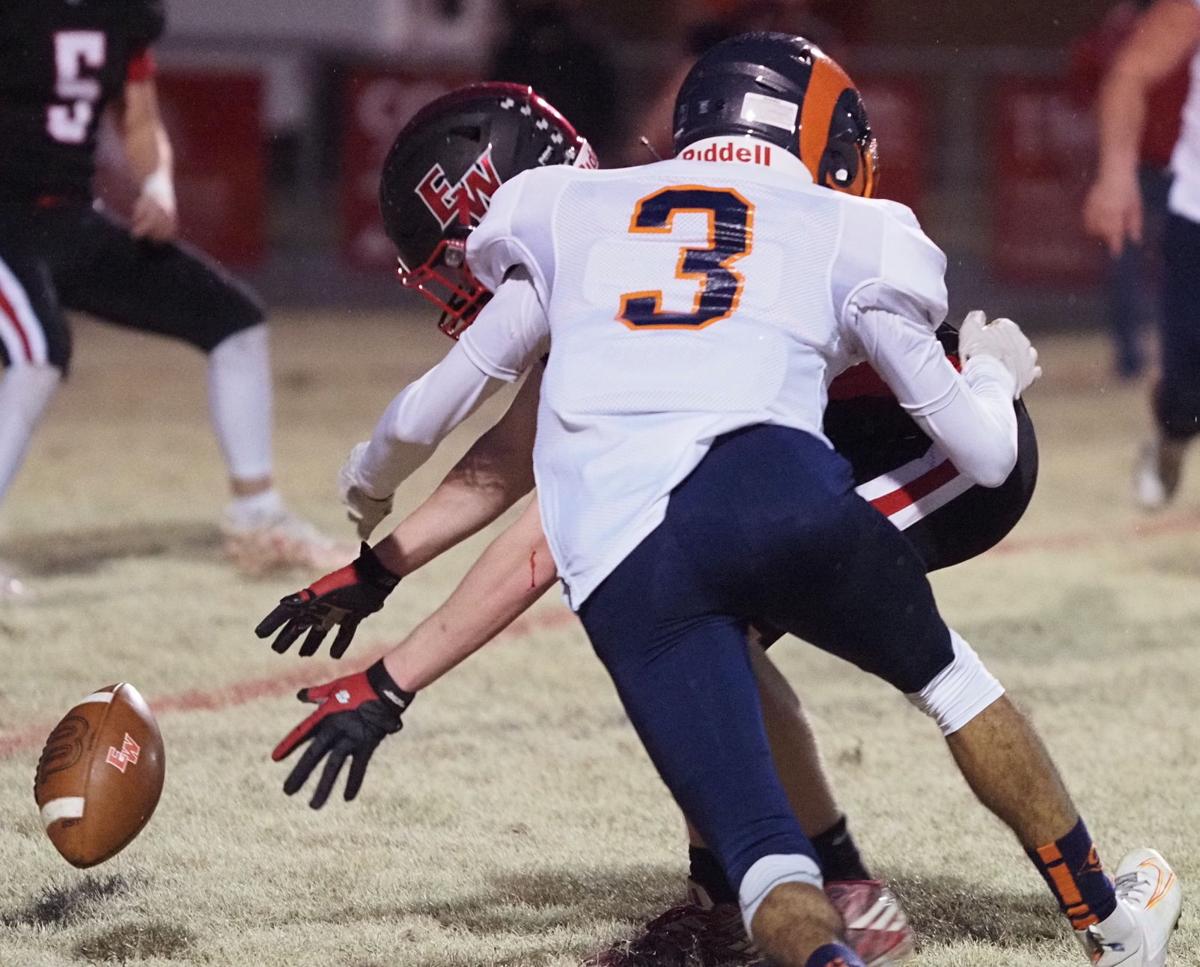 This pass, thrown by East Wilkes’ Briggs Gentry, falls incomplete, just out of the reach of junior Kole Lambert. Defending on the play is Starmount’s Jalyn Adams. The Rams clipped the Cardinals in Ronda on Friday, 14-7. 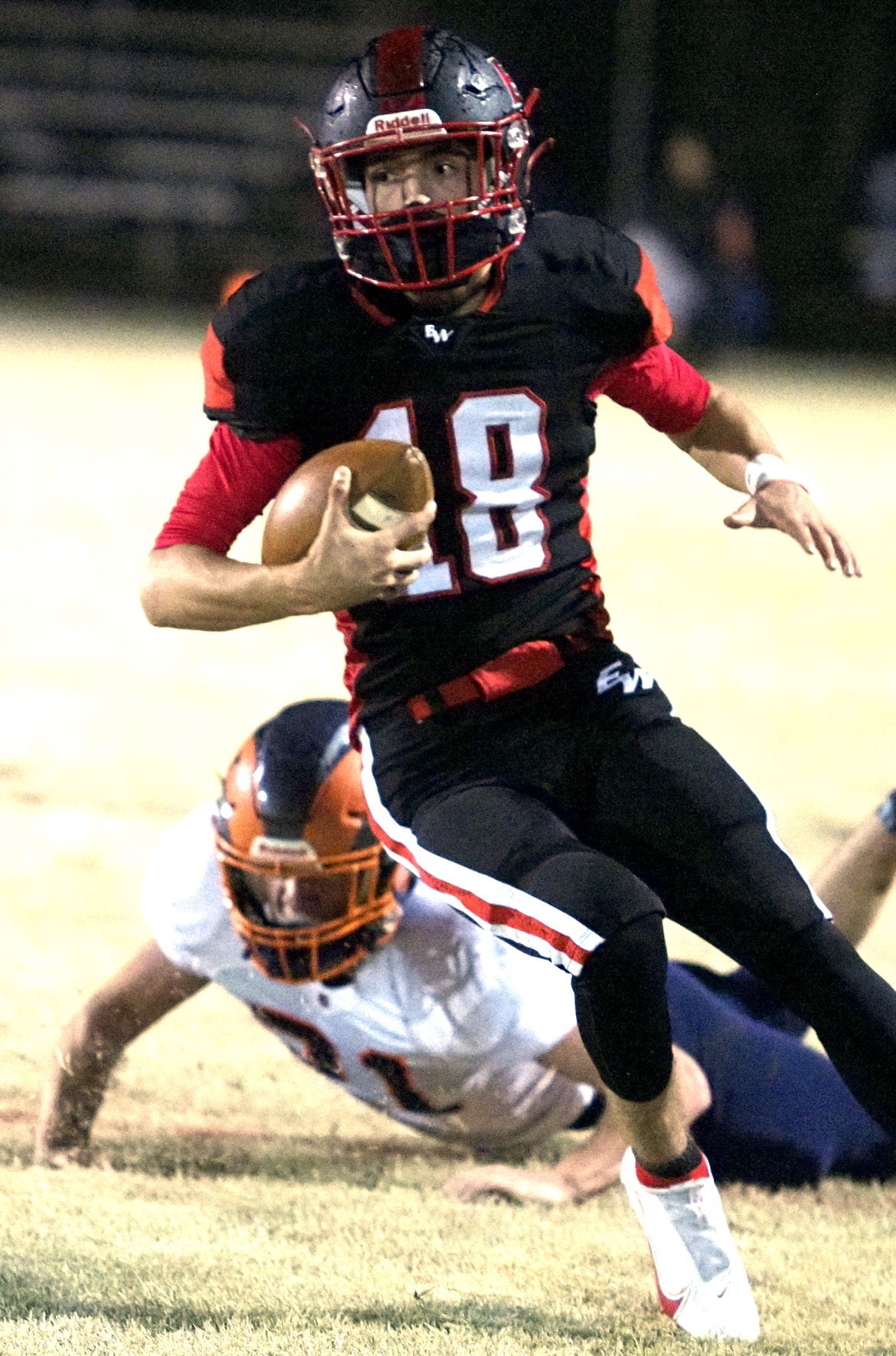 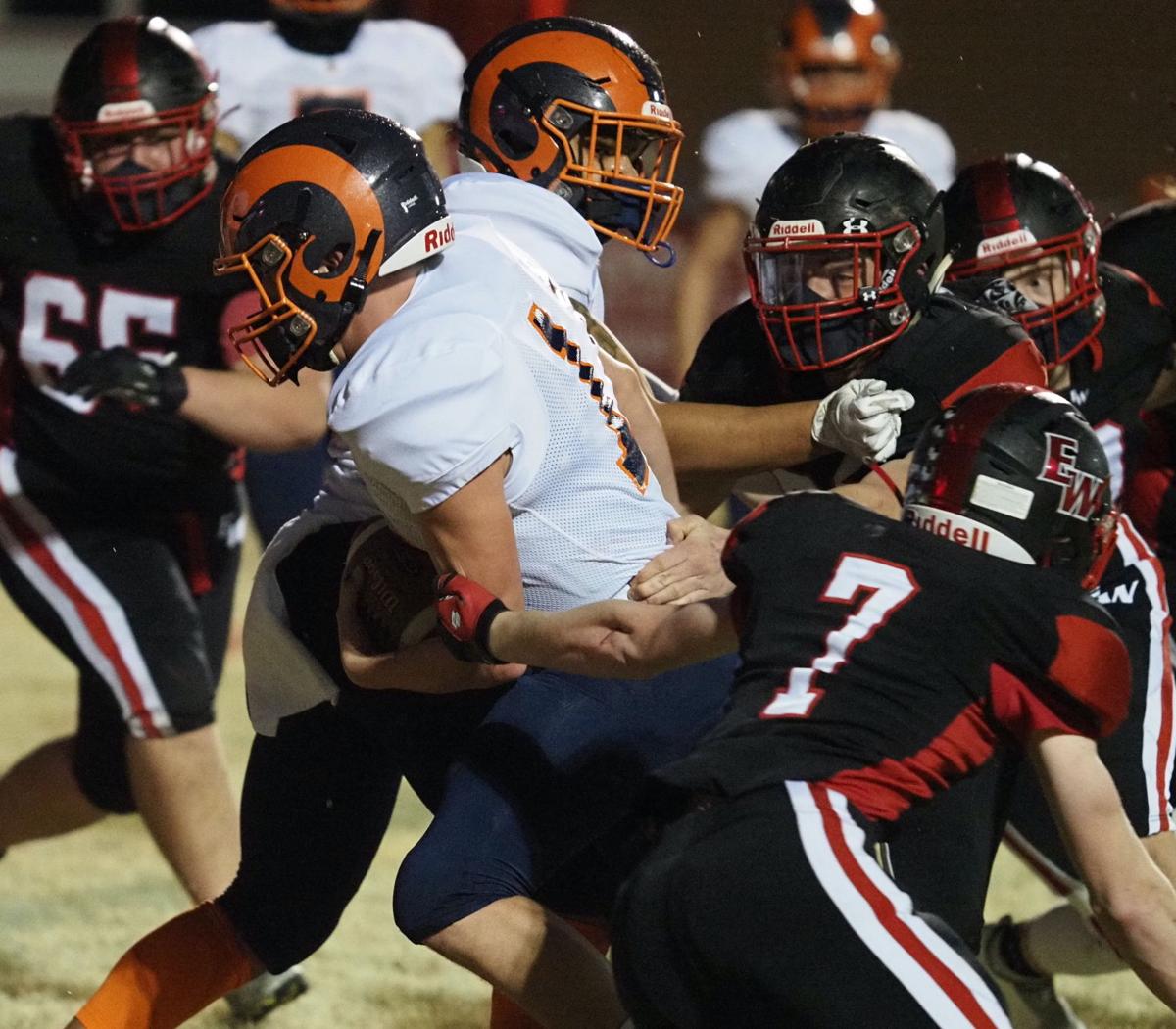 East Wilkes junior Cole Lambert (7) grabs the arm of Starmount quarterback Alex Armstrong and forces a fumble that was recovered by the signal-caller.

Taniya Martin reacts with joy after being named the East Wilkes High School homecoming queen on Friday. She is escorted here by her father, Harold Martin.

Photos by Marty McGee
1 of 3

This pass, thrown by East Wilkes’ Briggs Gentry, falls incomplete, just out of the reach of junior Kole Lambert. Defending on the play is Starmount’s Jalyn Adams. The Rams clipped the Cardinals in Ronda on Friday, 14-7.

East Wilkes junior Cole Lambert (7) grabs the arm of Starmount quarterback Alex Armstrong and forces a fumble that was recovered by the signal-caller.

East Wilkes, a varsity football team known for its improbable comebacks, nearly staged another one Friday night in Ronda.

Last year, the Cardinals rallied from a 28-0 deficit to upset first-place Ashe County on the road.

But on Friday, Starmount held off the late-charging Cardinals, 14-7, for a Mountain Valley 1A/2A Conference victory at Ebb Tharpe Field on homecoming.

“We played well defensively,” said East Coach Jonathan Wilmoth. “I thought we played hard on both sides of the ball all night.”

Wilmoth added, “But, we are not playing well offensively right now and that’s on me, and we are going to get it fixed.”

Down two scores with less than two minutes left in the game, East sophomore quarterback Briggs Gentry completed a third-and-2 pass from the Ram 22 down the left sideline to junior receiver Titus Miller at the 1-yard line.

From there, senior Bryson Sidden ran it in for a touchdown with 1:35 remaining. Jorge Lopez was good on the extra-point kick, making it 14-7.

On the ensuing onsides kick attempt, Lopez’s dribbler to the left was recovered by Jared Stokes near midfield, but an offsides penalty against Starmount resulted in a rekick.

On the redo, Lopez squibbed it straight ahead and attempted to recover it himself but the Rams pounced on it first, taking over on their own 49-yard line.

The Cardinal defense then held, forcing a Starmount punt with 45 seconds left in the game. Sidden returned the punt to the East 35-yard line.

With only 31 ticks left on the clock, Briggs completed a pass to Kole Lambert down the middle of the field to the Starmount 40-yard line. Briggs then spiked the ball to stop the clock with 18 seconds remaining.

On third-and-10 with 8 seconds left, Gentry’s pass was thrown deep and fell incomplete, setting up a final play with 1 tick remaining.

As time expired, Gentry scrambled left and heaved a throw down the left sideline and fell just out of bounds, intended for Miller near the 5-yard line.

With its third straight win over East, Starmount improved to 2-1. East fell to 1-2.

With 3:39 left in the opening quarter, after Starmount’s Jimmy Angulo was wide left on the 39-yard field goal attempt, the Cardinals had a fumbled exchange between quarterback and running back, handing the ball to the Rams at the East 10-yard line.

From there, Rams quarterback Alex Armstrong rolled right and found Kaden Pardue open on the same side of the end zone. Angulo’s extra point was good, making it 7-0 with 3:31 remaining in the first.

On East’s next possession, a high snap forced punter Lambert to scramble right before being tackled for a loss of possession at the Cardinal 4-yard line. On third-and-3 from the 3, Sterlin Holbrook took a handoff up the middle and went untouched for a score.

Holbrook led the Rams with 78 yards on 16 rushing attempts. As a team, Starmount managed only 115 total yards from scrimmage.

After Angulo’s second PAT, the Rams led 14-0 with 12 seconds left in the first quarter. That score would hold up until halftime.

East’s best drive of the first half ended at the Ram 20-yard line, after Gentry’s fourth-and-11 pass, intended for Ethan Cass, fell incomplete. Gentry was flushed from the pocket and had to scramble left under intense pressure from Starmount’s Jelani Powell.

With five minutes left in the third, on fourth-and-3 from the Ram 23, Briggs faked the handoff to Brody Martin, rolled left and completed a pass down the left flank to Sidden, setting up first-and-goal at the 5.

On fourth-and-goal from the 11, Martin attempted to run up the middle but was met by a host of Ram defenders after gaining just a couple of yards, turning the ball over to the visitors with 49 seconds left in the third.

Another good East drive failed to deliver points in the fourth, after Briggs’ pass on fourth-and-18 from the Ram 28, intended again for Cass, was overthrown in the end zone.

At halftime of the game, which was played in a constant drizzle throughout, Taniya Martin was crowned homecoming queen. She is the daughter of Harold and Cecilia Martin of Ronda.

The 1-2 Cardinals travel to Alleghany on Friday to take on the 1-2 Trojans.

“I thought our kids were really focused for the game and I thought they played extremely hard,” said Eagle Coach Ron Turner. “I was really proud of their effort.”

Turner continued, “I don’t want to take anything away from Elkin, because I thought they also played very hard and they are very well coached, but I feel like our injuries during the game had a tremendous effect on the game.”

Central’s head coach said he was “very proud of C.J. McGill, who came in the game in a tremendously tough situation and gave great effort. He is coming off ACL surgery and just got released and was not expecting to play.”

McGill filled in for Anthony Graham, a sophomore quarterback, who has had “a great start this season and so much of our offense is geared toward his speed and he makes it very tough for teams to concentrate all their focus on stopping (senior running back) JoRaye (Morrison),” noted Turner.

Central senior lineman Andre Wilson had to be wheeled off the field on a stretcher. “Andre was off to a great start this year, and it took our kids till halftime to get calmed down. I just feel so bad for him because he is such a great kid,” said Turner.

Elkin (2-1) led 15-8 at halftime en route to its third straight victory over Central.

The 2-1 Eagles will play Friday at 3-0 Ashe County. Turner said, “We have to find a way to regroup in a hurry despite all the injuries, because Ashe is a very good team. It will be a tremendous challenge this week.”

Ashe County struck twice in the first quarter and cruised to a 36-15 victory over North Wilkes in West Jefferson on Friday. The win bolted Ashe into sole possession of first place with a 3-0 record in the MVAC.

The Vikings intercepted a Huskies pass on the first possession of the game but then handed the ball back to the hosts after a loss of downs.

After taking over on their own 24-yard line, the Huskies got a 5-yard touchdown pass from Dawson Cox to Keenan Witherspoon. Timothy Peterson’s point-after kick made it 7-0.

After a North punt, Ashe scored on a 6-yard pass from Cox to J.J. Mannan. Another Peterson PAT spotted the Huskies a 14-0 lead.

With about four minutes left in the first half, North fumbled deep in its own territory and Ashe recovered at the 3-yard line. On second and goal, Cox hooked up with Mannan again through the air, and Peterson’s kick gave Ashe an 21-0 advantage.

On the ensuing possession, the Vikings drove from their own 28-yard line to paydirt, converting on fourth down twice, the second time from 1-yard out for a rushing score. North was successful on the two-point conversion pass to make it 21-8 at halftime.

The Vikings punted on their first possession of the second half. The Huskies drove 78 yards and scored on Peterson’s 5-yard scamper. The kick by Peterson was good, and the Ashe lead was 28-8.

North’s Tryston Walker intercepted a Cox pass with about two minutes left in the third, but the Vikings were stopped on fourth down at the Ashe 13-yard line.

Ashe capitalized on the turnover with a 20-yard pass from Cox to Austin Poe. Poe’s two-point conversion run made it 36-8 with about five minutes left to play.

North engineered an 80-yard scoring drive on its next to last possession of the game. Quarterback Zach Wyatt completed a 15-yard pass to Will Harrold for the touchdown, and Samuel Panneton’s extra-point kick completed the game’s scoring with four minutes left.

After their third straight loss to Ashe, the Vikings fell to 0-3 and play at 2-1 Elkin on Friday.

Alleghany’s Riley Pruitt had three rushing touchdowns—including a pair to extend the lead in the fourth quarter—and the Trojans turned back West Wilkes in Sparta on Friday, 25-7.

“We let one get away—we just made too many mistakes,” said West’s coach, Phil Collett, whose club dropped its third straight against the Trojans.

Pruitt finished with 91 rushing yards and teammate Alex Woodel had 92 on the ground for the hosts. Quarterback Nick Rea efficiently completed 6-of-7 passes for 65 yards.

The Trojans struck first with about three minutes left in the first quarter. Pruitt rambled 28 yards for the score, and Anthony San German’s point-after made it 7-0.

On the ensuing possession, Alleghany blocked a West punt and recovered in the end zone for a touchdown. The PAT missed with less than a minute left in the first period, and the score remained 13-0.

“That punt blocked for a touchdown really changed the game,” said Collett. “I take full responsibility for that—it should never happen. We’ll go back to work, fix our mistakes and get better.”

West got back in it with a 20-yard passing touchdown from Logan Wayne to Shane Gragg about seven minutes before halftime. After the extra point kick, the Trojan lead was reduced to 13-7 at the break.

After a scoreless third quarter, Pruitt rushed 12 yards into the end zone with about six minutes left to play. The two-point conversion failed, and Alleghany led 19-7.

Then, with about two minutes left, Pruitt added a 3-yard rushing score to finish the scoring. The PAT was unsuccessful.

The Blackhawks slipped to 1-2 and take on 2-1 Starmount in Boonville on Friday.