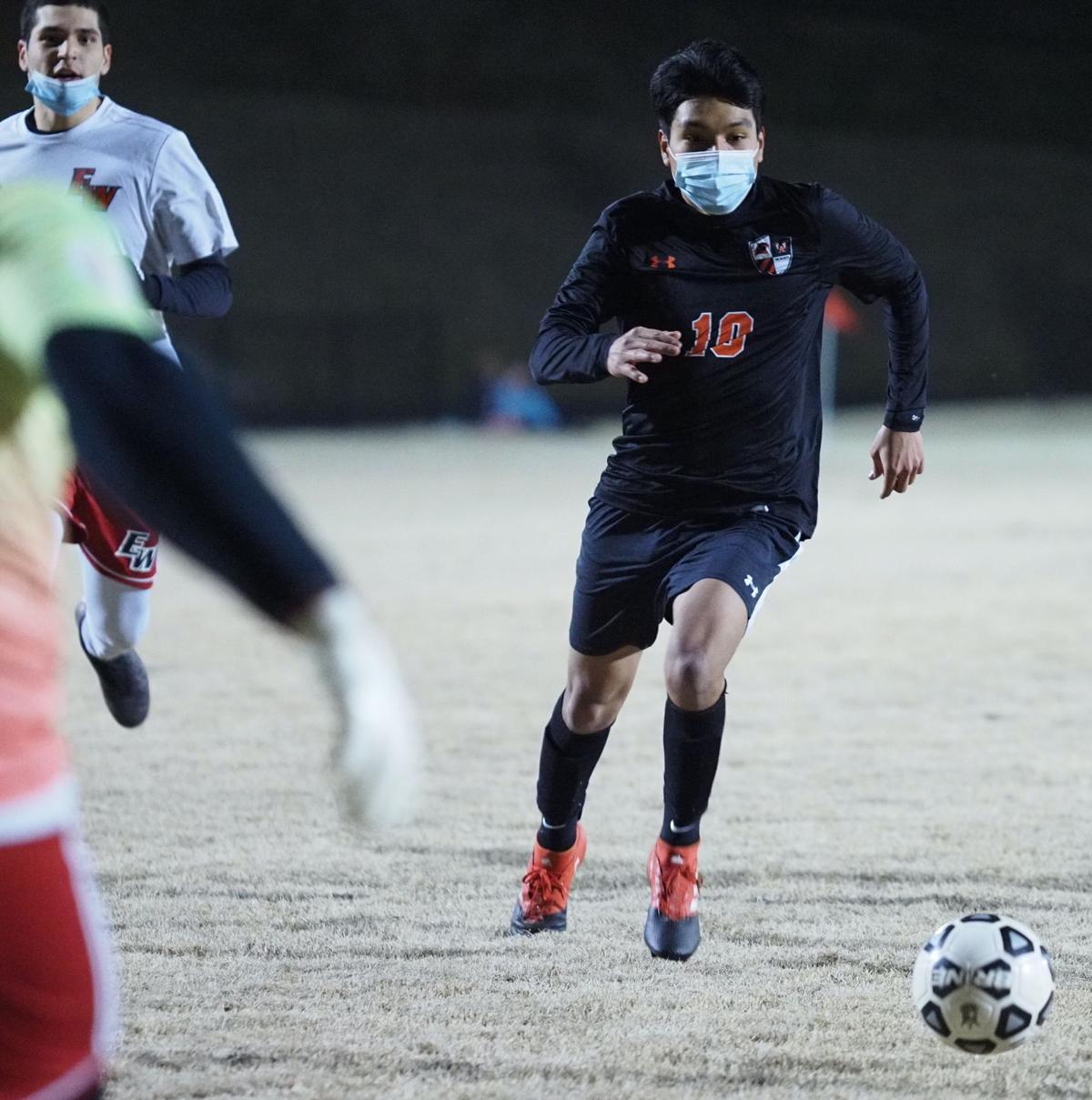 West sophomore forward Alexi Ramires had two goals and an assist in his club’s 4-0 shutout of East Wilkes on Thursday. 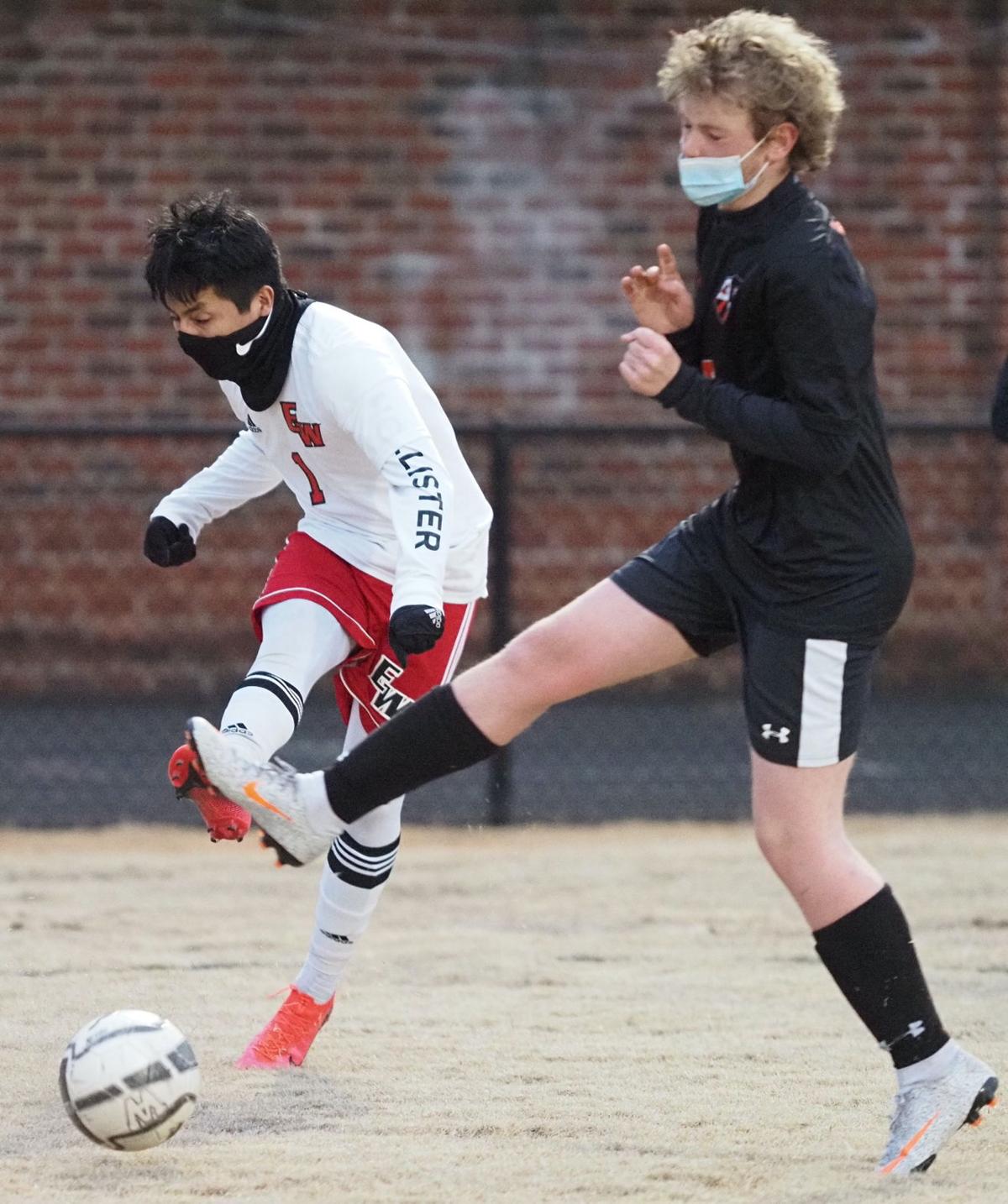 East Wilkes senior Adalian Ventura-Trinidad take a shot on goal Thursday as West Wilkes junior Jackson Bell gets a foot in to defend during West’s 4-0 win in Millers Creek. 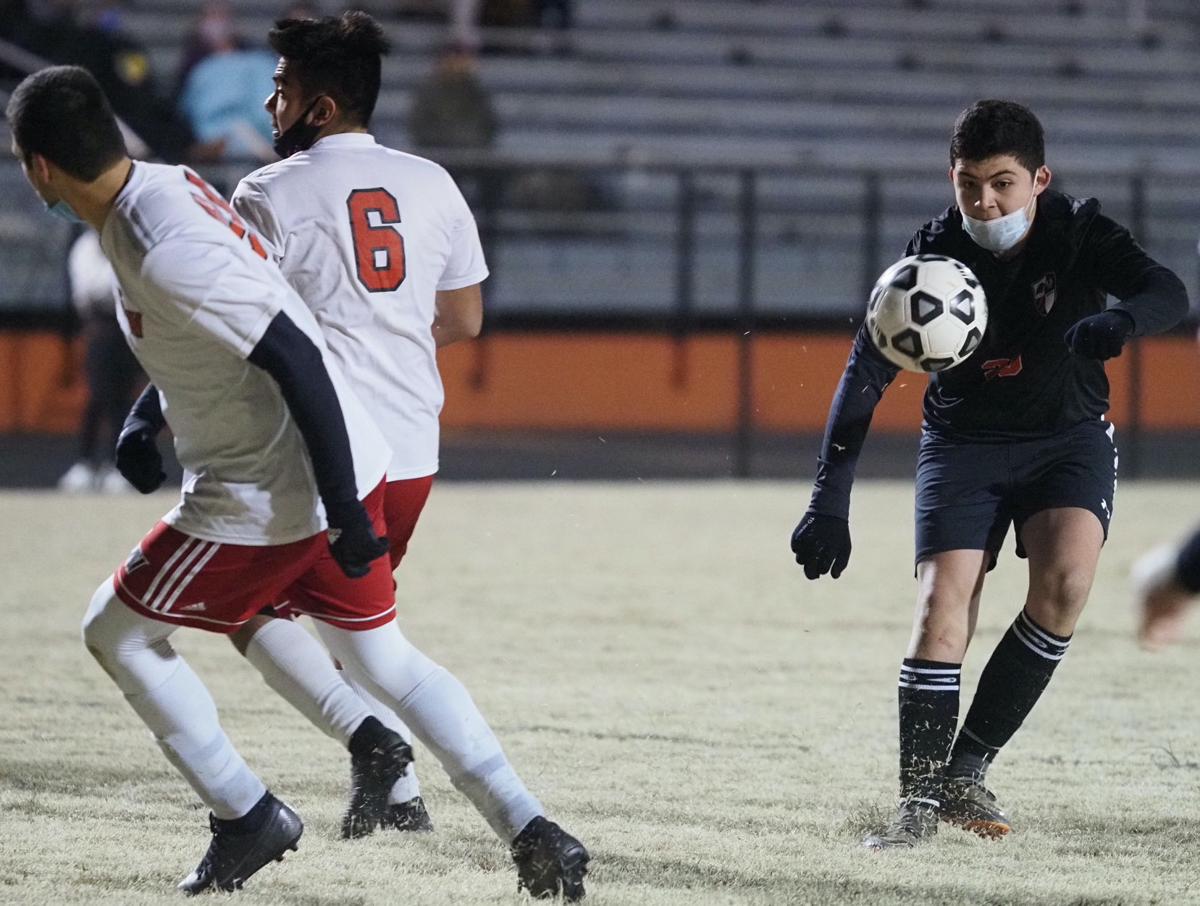 West sophomore forward Alexi Ramires had two goals and an assist in his club’s 4-0 shutout of East Wilkes on Thursday.

East Wilkes senior Adalian Ventura-Trinidad take a shot on goal Thursday as West Wilkes junior Jackson Bell gets a foot in to defend during West’s 4-0 win in Millers Creek.

The Blackhawks evened their season record at 1-1 while the Cardinals fell to 1-2 in the Mountain Valley 1A/2A Athletic Conference.

West sophomore forward Rodney Perez connected on a medium-range penalty kick with 22:15 left in the first half.

West scored again on a nicely-executed cross to sophomore forward Alexi Ramires, who headed the ball into the net for a 2-0 lead with 11:20 to play before the break.

Ramires booted home a 30-footer with 38:30 left in the contest for a 3-0 advantage for the hosts.

On an indirect free kick, Ramires passed the ball back and right to junior defender Leo Resendiz, who hammered home the short 20-footer to finish the scoring with about 26 minutes to play.

"West Wilkes played tough and you can tell they are a well coached team," said Avery Wallis, East's coach. "They played a well rounded game. Our guys struggled with gaining and keeping possession and moving it up the field offensively—we had very little shot opportunities.

"Our communication could have been much better. Also, we had a couple of defensive breakdowns that cost us each half, but other than that I feel my guys played hard and are working hard and learning each other still."

Wallis added that his team had a short preseason due to him also coaching JV basketball. "We need to get in a little better shape than we are in right now. The current emphasis is to continue to try and grow and compete with each opportunity we get. We will take this one as a learning opportunity and try to make some adjustments to our play in the games ahead."

West has now won the past three matchups against East, which includes 1-0 and 6-0 shutouts in 2019. Prior, East had taken five in a row over the Blackhawks.

Elkin slipped by West Wilkes, 4-3, in Millers Creek on Monday.

The Blackhawks found the net three times in the second half but slipped to 1-2. Elkin upped its season record to 2-1.

League-leading Starmount shut out North Wilkes in Hays on Monday, 7-0.

"Starmount is by far the best team we have faced this season," noted James Cline, North's coach. "They jumped up on us early in the first 10 minutes with two quick goals. Starmount dominated both sides of the ball."

Cline said his club had some scoring opportunities but could not follow through. "Melvin Martinez came off the bench and gavea solid effort on the defensive side of the ball. Others that played well were Soloman Pannenton, Gracen Cline and Yefferson Bonillia."

Ashe County scored four goals in the last 20 minutes of a 6-1 win Friday over North Wilkes in Hays.

“Our kids played really well for most of the game,” said North Coach James Cline. “I believe this was a really good effort from the team.”

Nolan Stanley had North’s only goal on a direct kick from about 40 feet out from the right side of the field. Cline said that Stanley, Samual Panneton, Yefferson Bonilla, Ivan Duran and Braeden Foster had “all-conference caliber games.”

Cline added, “We struggled to keep pace with a very deep Ashe County team. However, both Brendan Davis and Trent Dillard showed leadership in helping the team when asked to do so by their coach.”

Dylan Short had three goals and an assist for Ashe (1-0 in MVAC) and Ramces Lopez had four saves in goal. North fell to 0-2 on the season.

League-leading Starmount shut out West Wilkes on Feb. 3 in Boonville, 4-0.

Manny Ferretiz scored a goal and assisted on another for the Rams (3-0). Other goals were recorded by Noah Silva, Diego Zuniga and Pablo Alvarez.

East Wilkes defeated Alleghany in Sparta on Feb. 3, 7-1. The Cardinals improved to 1-1 while the Trojans dropped their season opener.

"I'm proud of our guys and the way they worked together," said East Coach Avery Wallis. "They played hard, played smart, and played together, and when talented kids do those things they're giving themselves a great chance to do good things, and versus Alleghany that's what they did."

East Wilkes dropped its season opener on Feb. 1 to Starmount, 10-1 in Ronda.

Ty Ferguson netted the only goal for the Cardinals.

Starmount's Zuniga, Alvarez and Brandon Ocampo each had four points (goals and assists). Tulbert had three saves in goal.

North Wilkes was blanked in its season opener on Feb. 3, 4-0 at Elkin. The Buckin’ Elks scored three times in the first half en route to evening their season mark at 1-1.

“This is a very talented Elkin team,” noted North Coach James Cline. “They are solid from top to bottom with their roster. Elkin had great spacing and passed the ball really well. Defensively, we had a few communication errors and were not as aggressive as I would like on both sides of the ball.”

Cline thought the score was not indicative of his team’s play. “I felt that freshman Mathew Pardo played an excellent game. He was aggressive and seemed to never tire throughout the match. Gracen Cline had a good game as well. He is a sophomore and can play as a defender and a wing/striker.”

Samual and Soloman Panneton “played well and contributed on both of the sides of the ball,” said Cline. “Ben South, a freshman, showed a lot poise on the defensive side of the ball in his first varsity match. Even with not so great field conditions, Brayden McGlamery played as well as he could in goal.”

Cline said he has plenty of expectations for his young team, which is comprised of four seniors, two juniors, eight sophomores and three freshmen.

Six underclassmen are starters, and the team’s strength is in the octet of sophomores, he said.

These young players are picking up the scoring of Alex Ruvalcaba, one of the league’s top players last year who is furthering his soccer career at Mars Hill University.

“We are young, but I believe that we will be a tough draw for any of the other teams in the conference,” said Cline. “I feel the future is very bright for the men’s soccer program for the next couple of years.”