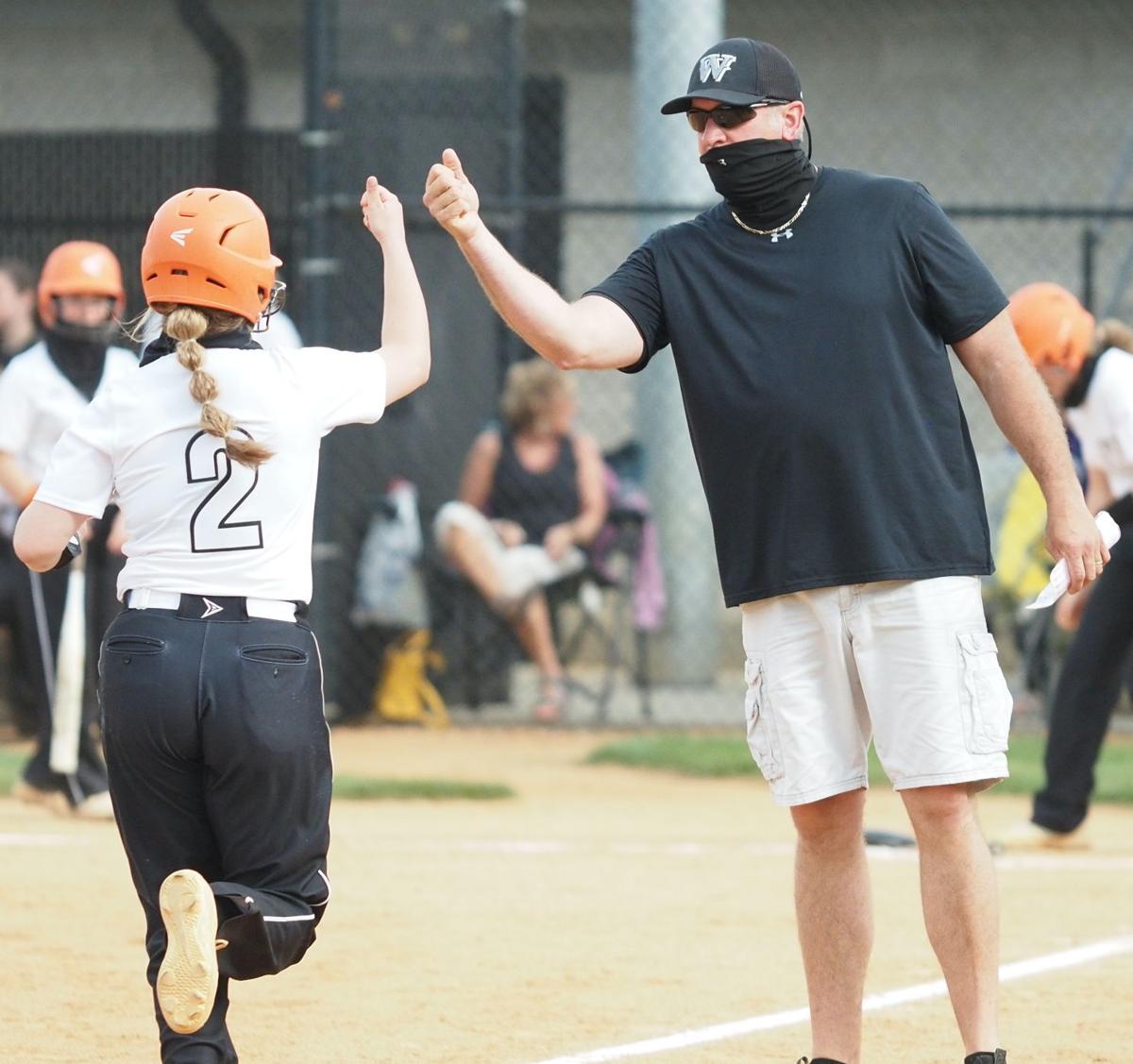 West Wilkes’ Kacey Triplett gets a fist bump from Coach Michael Woodruff after cracking a two-run homer in the third inning of her club’s 6-0 win Thursday over Ashe County. 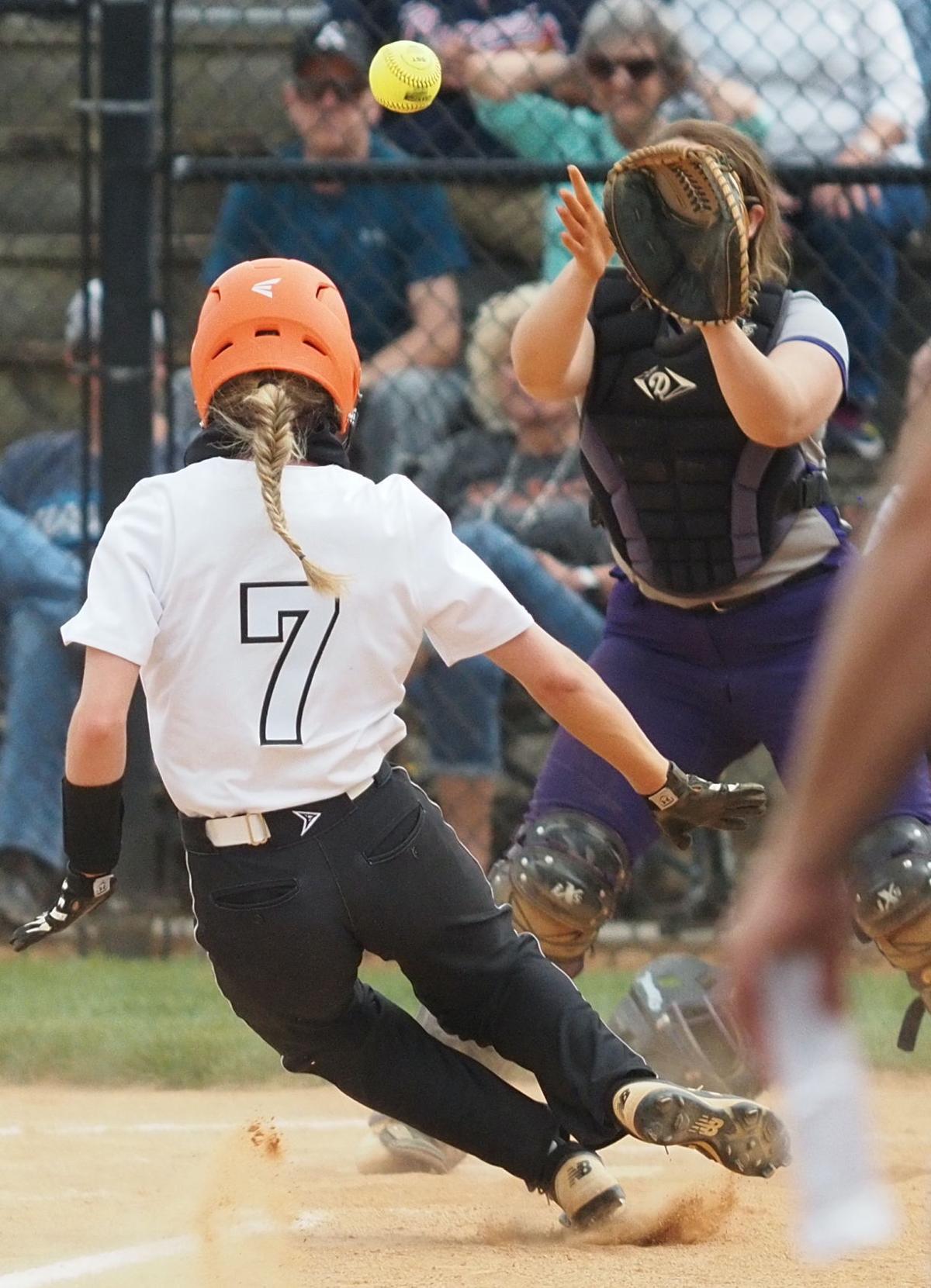 West Wilkes senior Carly Parsons slides into home safely for the first run in her team’s 6-0 win over Ashe County on Thursday. Awaiting the ball is Huskies catcher Rylee Williams.

West Wilkes’ Kacey Triplett gets a fist bump from Coach Michael Woodruff after cracking a two-run homer in the third inning of her club’s 6-0 win Thursday over Ashe County.

West Wilkes senior Carly Parsons slides into home safely for the first run in her team’s 6-0 win over Ashe County on Thursday. Awaiting the ball is Huskies catcher Rylee Williams.

West Wilkes (14-0) hosted Burns (8-4) in the first round of the 2A state playoffs on Tuesday. Complete results will be published at journalpatriot.com and the May 12 edition of the newspaper.

Lily Proffit and Carly Parsons each threw five-inning no hitters Thursday as the West Wilkes varsity softball team swept a doubleheader from Ashe County in Millers Creek to complete a 14-0 regular season.

“I couldn’t have asked for a better outing from either one of my pitchers,” said West Coach Michael Woodruff. “They both hit their spots and were spot-on all evening with their pitches. Defense was sound once again and the bats came alive when we needed them.”

In the Mountain Valley 1A/2A Athletic Conference twinbill opener, freshman Proffit (10-0) walked one, hit one batter and struck out 14 of the 17 batters she faced as the Blackhawks won, 6-0.

West never looked back after scoring four in the second. Parsons led off with a sharp single between second and third. Kendall Stanley then lined out to Ashe pitcher Sydney Greer, but Greer overthrew first on the attempt to double up Parsons, allowing the senior to advance to third on the play.

Parsons broke home on Lizzie Church’s grounder, sliding in safely just before the tag for a 1-0 lead. A groundout by Paige Phillips plated another run, then Sophie Nichols’ sharp grounder directly to third was muffed, allowing two more runs to score.

Junior shortstop Kacey Triplett cracked a towering two-run homer to right field in the third to complete the scoring. Scoring ahead of her was Stanley, who led off with a walk.

In the nightcap, Parsons walked two and struck out seven of the 17 batters she faced as West posted a 7-0 victory.

The Blackhawks decided it early, putting three runs on the board in each of the first two frames.

Proffit went 2-for-3 at the plate with a home run and two RBIs. Stanley also drove in two runs, going 2-for-3 with a double.

Triplett doubled in the contest and drove in a single run, as did Church and Nichols.

“I could not be prouder of the girls going 14-0 on the regular season,” added Woodruff. “Any coach will tell you it’s tough to go through a conference and see teams twice with the quality pitching and remain undefeated. I have an amazing group of young ladies and an awesome coaching staff to work with. That is where our success comes from.”

Lily Proffit threw a three-hit shutout for West. The freshman improved to 9-0 after walking four and striking out a season-high 16 batters.

Proffit helped her own cause with a run-scoring single to left in the first off Alleghany senior Kenzi Lyall, who took the loss. The hit plated senior Sophie Nichols, who walked to lead off and took third on a bunt by Presley Dancy.

In the fourth, senior Carly Parsons hit a ground ball to third which was thrown away at first and then misthrown to second, which allowed her to score for a 2-0 West lead.

“Our defense was spot on, and we had a great outing from Lily once again,” said West Coach Michael Woodruff. “Jayla (Fisher) in left field threw a runner out at the plate to end the fifth inning and then made a diving catch in left center to get the second out of the seventh inning. The kid had an amazing defensive night in left field.”

The third-place Trojans backslid to 9-4 with the loss but have already clinched the MVAC’s 1A playoff berth.

Wilkes Central secured second place in the MVAC with a 3-1 win Thursday at Elkin.

The Eagles finished 11-3 but did not receive an at-large bid in the 2A state playoffs.

Central scored twice in the seventh to edge Elkin (5-9) on a “once in a lifetime play,” according to Eagle Coach Colby Shell.

Senior Karlie Anderson laid down a bunt single with one out. Anderson stole second and moved to third on Drema Vickers’ infield single. Pinch runner Aurora Higginbotham then stole second base to put runners in scoring position.

Facing a 2-2 count, Sydney Ferguson grounded to the right side of the infield. “They throw to first and Karlie takes off,” noted Shell. “All the while, Aurora is flying around third, too. Karlie slides just before the throw and is safe, and as she gets up Aurora slides in right behind her.”

Shell added, “The catcher was just stunned. No one expected Aurora right behind her.”

Isabelle Curry (11-3) then shut down the Buckin’ Elks in the bottom of the seventh. For the game, the junior allowed three hits and one earned run while walking three and striking out 13.

“Red pitched awesome and the defense backed her up the whole way,” Shell said. “And Christa (Walsh) and Katie (Nichols) had some solid shots in the game.”

East Wilkes posted a 17-14 victory over North Wilkes in Hays on Thursday, the season finale for both clubs.

The Cardinals led 12-0 after the top of the third, but the Vikings rallied and took the lead with 13 runs in the fourth and fifth innings. East scored five times in the sixth for the winning margin.

“The game was insane,” admitted Derrick Hill, the Cardinal coach. He said North took the lead “mainly because my pitchers couldn’t throw a strike. We walked 21 and hit four batters. I don’t know how we won with those walk totals.”

The Cardinals finished 6-8 while the Vikings were winless in 14 games.

East Wilkes scored four runs in the seventh inning of a 5-1 win at Elkin on April 27.

In the seventh, East’s Maggie Bullard singled, Abby Hatley walked and Kali Cook had a bunt single to load the bases. Macie Bell then doubled to left to drive in two runs. Haley McManus singled to right to plate the final run.

On the mound, McManus allowed only one hit and an unearned run in the third. “It was a really good game,” noted East Coach Derrick Hill.

Each club stood at 5-8 in the MVAC after the contest.

Wilkes Central posted an 11-3 win at Ashe County on April 27.

“We scored a lot of runs early with several nice hits,” said Eagle Coach Colby Shell. “After the third everything we hit found a glove. We didn’t have a single strikeout in the game, which was truly awesome.”

The Eagles (10-3) were paced by junior Saleen Miller’s 3-for-4 effort at the plate. She drove in two runs, as did Sydney Ferguson, Christa Walsh and Karlie Anderson.

Curry improved to 10-3 on the mound with the complete-game victory. The junior allowed four hits and two earned runs while walking two and striking out a season-high 16.

“Red got comfortable after a couple batters and really sat them down from there,” noted Shell.

The Huskies slipped to 3-9 with a doubleheader looming at West Wilkes on Thursday. The Eagles finish the regular season Thursday at Elkin.

“We are trying to finish as strong as possible to really show how great this team truly is,” added Shell. “Wilkes Central softball has for sure had a resurgence this year.”

A mix of clouds and sun. A stray afternoon thunderstorm is possible. High 84F. Winds light and variable.

A clear sky. Low near 60F. Winds light and variable.

A clear sky. Low near 60F. Winds light and variable.

Showers early, becoming a steady rain late. Low around 65F. Winds light and variable. Chance of rain 70%. Rainfall around a quarter of an inch.

A few clouds from time to time. Low 62F. Winds light and variable.