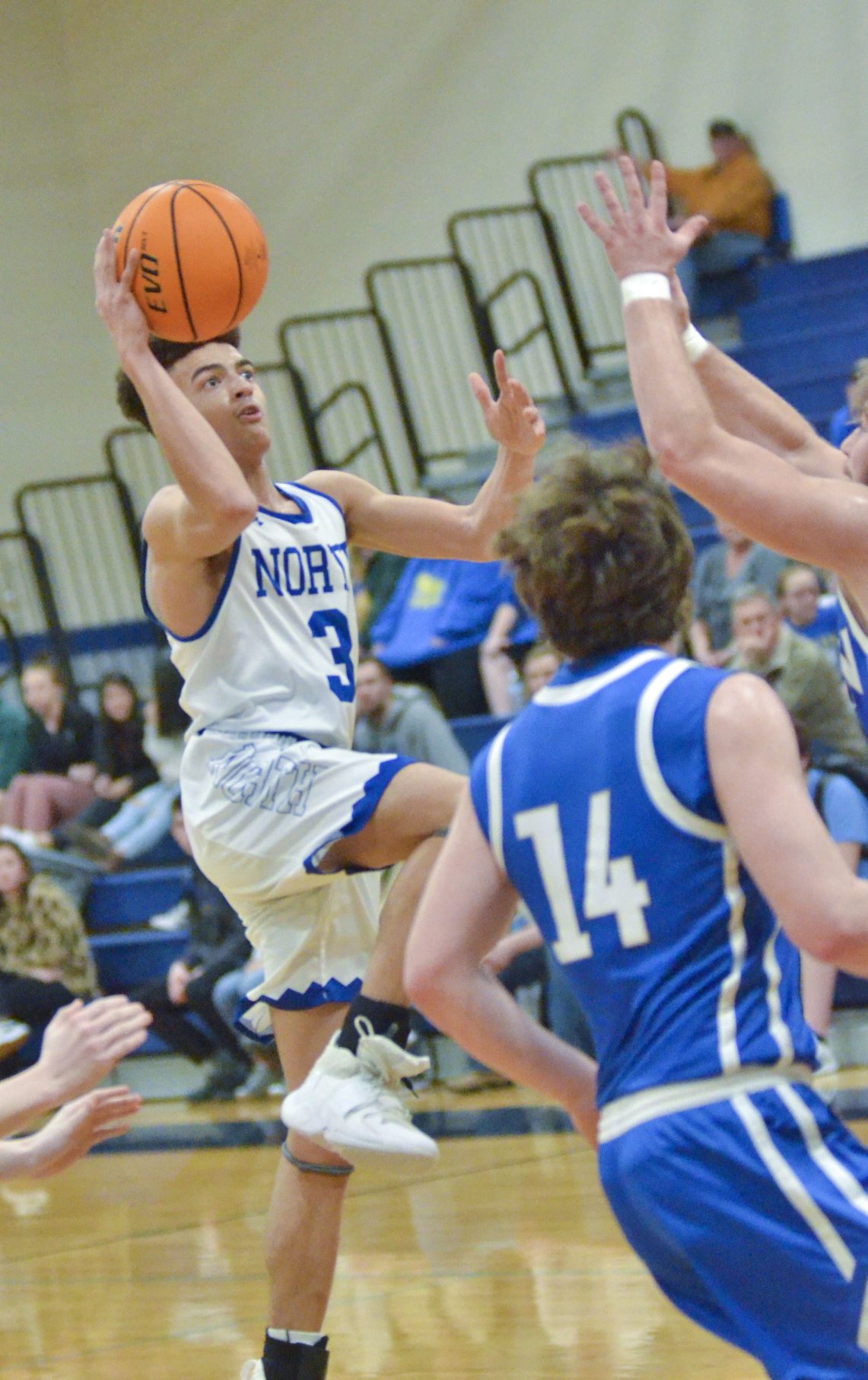 ZACK CARLTON puts up a runner in the lane against Elkin’s Maston Renegar and Austin Longworth (14) in the second quarter. Carlton led North Wilkes with 13 points on Friday night. 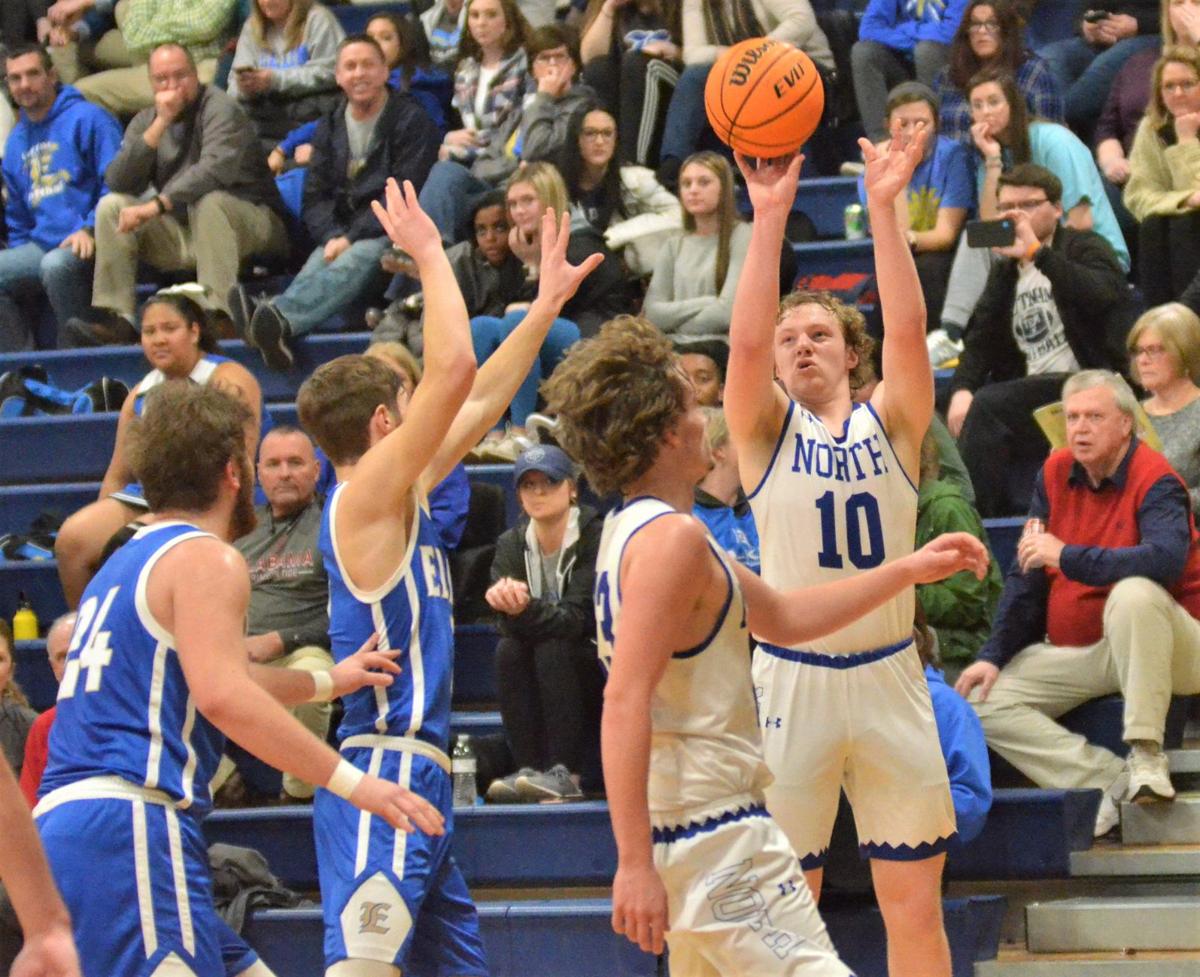 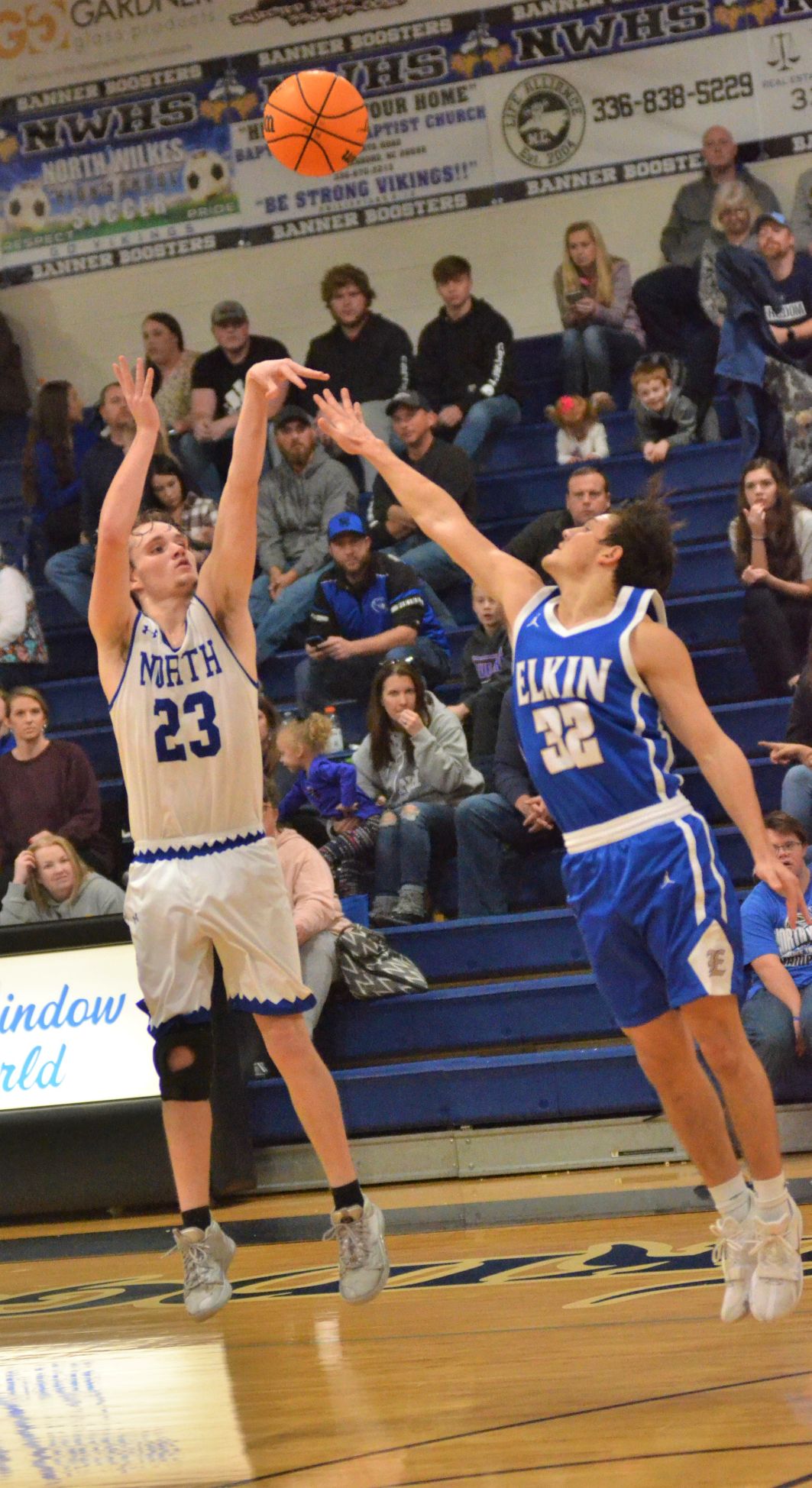 North Wilkes' Trenton Sidden connects on a 3-pointer with just over 30 seconds to play in Friday's game.

ZACK CARLTON puts up a runner in the lane against Elkin’s Maston Renegar and Austin Longworth (14) in the second quarter. Carlton led North Wilkes with 13 points on Friday night.

Shane Price sank a short-corner jumper from the right side as time expired Friday night in Hays to lift Elkin to a thrilling 50-48 victory over North Wilkes in a Mountain Valley Athletic Conference showdown.

Price shot a dart between the outstretched hands of two Vikings’ defenders. It sailed just over the rim and in as the visitors improved to 7-12 overall and 6-5 in league play.

That basket derailed a spirited North comeback attempt that saw the home team battle back from a nine-point deficit with 3:38 left in the fourth.

Junior guard Trenton Sidden tied the game with a clutch 3-pointer from the top of the key with 32 seconds left on the clock and the Vikings forced Price into a tough attempt from the corner.

But Price was right with his jump shot, sending the Vikings to a record of 6-15 and 2-9.

“In our scout, that was the guy we were worried most about,” said North Wilkes Head Coach Logan Call of Price. “And up until that point, we did a great job taking him away. He didn’t score in the first half. But he made a tough, two-dribble pull-up jumper against a couple of our guys in those last seconds, so credit to him for making the big shot.”

Sidden’s triple came off a dribble hand-off from Matthew Holloway with the home team down three. Sidden instantly turned to the basket and let fly, and his swish seemed to give the Vikings momentum at the end.

“Trent is a great shooter,” said Call. “He’s been forced to play the point for most of his career, so I’m not sure even he realizes how good a shooter he is. But when he’s on, he’s one of the best in the league, and he completely changes our offense.”

Elkin still had plenty of time to get off a shot before the final buzzer. The Elks called timeout after being stymied in their initial set by a stingy Vikings’ defense for around twenty seconds, and Call used the time-out to switch defenses.

“We had gone man and used our zone full-court press the entire game, so we decided to give them a different look late,” said Call. “Obviously switching like that has some risk, but the guys did a great job with the switch, and we caught them off-guard. But Price was still able to make the tough play.”

Zack Carlton led the Vikings with 13 points (including three from long-distance) and Sidden and Holloway had 10 and nine, respectively. Elkin’s Austin Longworth led all scorers with 14 and Ty Parsons chipped in 12 points.

Vikings’ center Lyle Watkins scored only one basket Friday, but still made his presence felt on the defensive end with a number of blocks and altered shots against the Elkin offense.

“He came in and dominated the Ashe County game (a 45-42 Vikings’ win on Tuesday), and showed again tonight how effective he can be without scoring a whole lot,” said Call. “Honestly, I think he’s the best defensive big man in our league. He plays the game with joy and heart, and I don’t know where we’d be without him.”

After the game, Call praised his squad for mounting the comeback against a talented Elkin team.

“Despite our record, these kids are still showing a lot of fight,” said Call. “At the end of the day, that’s the number one thing. Even in a loss, I couldn’t be more proud of them.”

North Wilkes has another tough match-up tonight, on the road against West Wilkes. The Blackhawks beat the Vikings 70-63 on Jan. 10 in Hays. The Blackhawks, currently third in the conference standings, have lost three MVAC contests in a row.

Elkin, meanwhile, will travel to West Jefferson to face Ashe County. The Elks beat the Huskies 53-48 earlier this season.

Brennen Robinson scored a game-high 23 points in the afternoon’s JV contest as his Elks bested North Wilkes 45-34. Robinson’s best quarter was the fourth, where he scored 13 points to help put the game away. Zack Wyatt and Brandon Holloway scored nine points each to lead the home team.

Mystery in the night sky