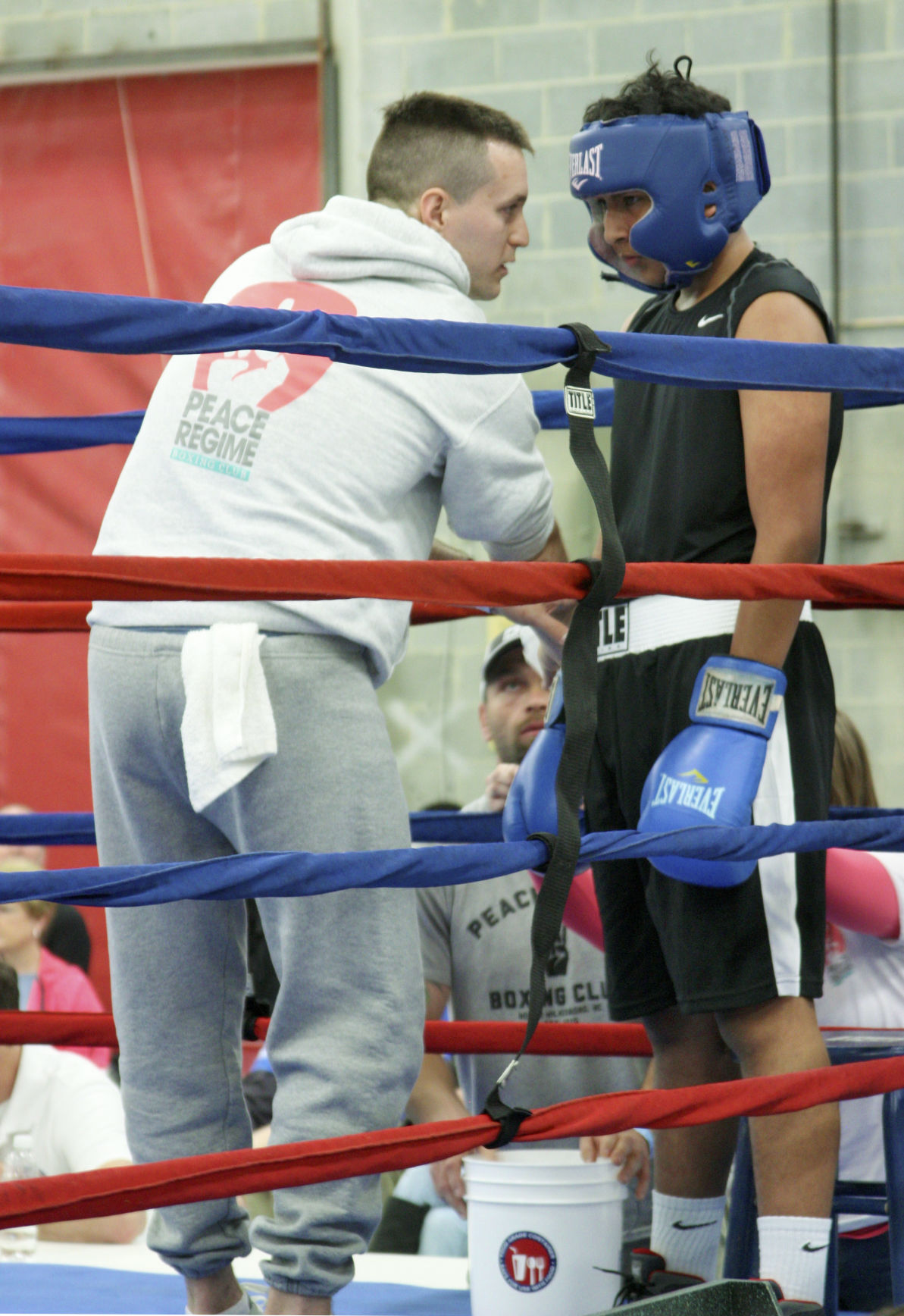 ANTHONY ESPIRITU receives some pointers from head coach Andrew Palmer between rounds of his bout with Trey Allison. 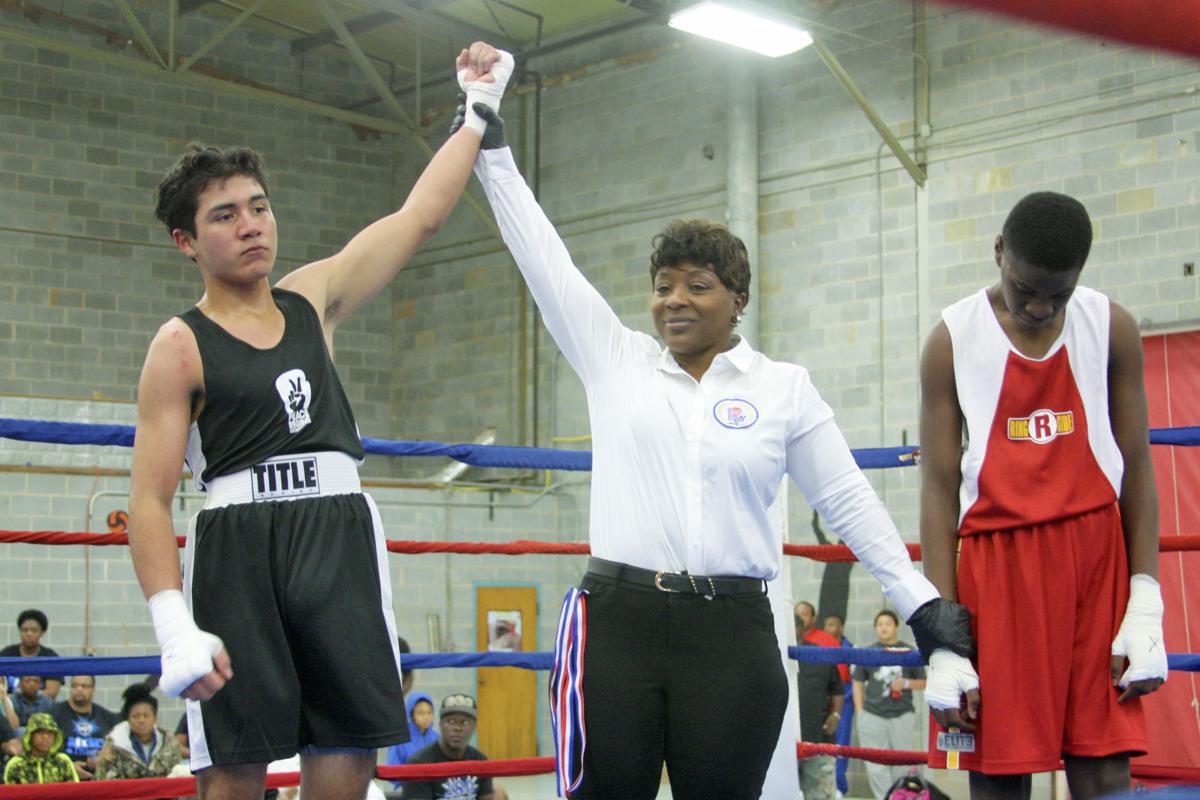 ANTHONY PERALES has his hand raised in victory by the referee following his victory by TKO against Thaddeus Dolford.

ANTHONY ESPIRITU receives some pointers from head coach Andrew Palmer between rounds of his bout with Trey Allison.

ANTHONY PERALES has his hand raised in victory by the referee following his victory by TKO against Thaddeus Dolford.

The Peace Regime Boxing Club on Wilkesboro Avenue has been open a little less than a year but two Wilkes County boxers are already benefitting from what it has to offer.

The event, which was held by Light Bright boxing, took place at Thomas Gymnastics in Rock Hill in front of a few hundred people, according to Peace Regime gym owner and Head Coach Andrew Palmer.

Perales, a sophomore at Central, and Espiritu, a freshman, competed in the second and third bouts of the night.

Perales began boxing in June 2016 and Espiritu began in Febuary 2017 and both are regular members of Peace Regime Boxing Club. Palmer, Chris Blevins and Heather Powell coach them.

“I’m really proud of these young men. They train hard several days a week for months to prepare for these matches,” said Palmer. “It’s a team effort on the part of them and all of the coaches at our club. It takes a lot of hard work and dedication to do what they have done. They have represented our wonderful community well.”

Perales, who goes by the nickname Biggie, fought in the fourth fight of his amateur career against Thaddeus Dolford of One More Round Boxing out of Lamar, S.C. According to Palmer, Dolford had fought in seven previous bouts.

The tone for the bout, which Palmer called “a tough fight and a crowd pleaser,” was set in the first round by Perales. In the second round, Dolford keep fighting hard but before the round ended, the referee gave Dolford a standing eight-count, otherwise known as a protection count.

By the middle of the third and final round, that bout was waived off by the referee as Perales had pinned Dolford to the ropes for the win by technical knockout.

Espiritu, who goes by the nickname Elvis, fought in his first sanctioned match against Trey Allison from Marion. According to Palmer, Allison was more experienced and undefeated at 4-0.

In the first seconds of the fight, Allison came out with a combination that Espiritu avoided and countered.

After that, Espiritu controlled the fight with slick defensive skills and counterpunching and after three rounds, had his hand raised in victory via the judges’ unanimous decision.

“Allison was a disciplined competitor but found him (Espiritu) evasive and difficult to find,” said Palmer. “He kept Allison guessing and frustrated throughout the fight.”

Perales and Espiritu are just two of the near 40 members who train at Peace Regime.

While the gym itself opened last year, the club was established in 2015. According to their website, they offer contact and non-contact skills-based boxing classes, fitness boxing classes, strength and conditioning sessions, diet and nutritional advice and sanctioned boxing competition opportunities.

Peace Regime is also registered with USA Boxing and the coaches are USA Boxing certified.

“There are no athletes in this community who work harder than these kids do. They train six days a week for weeks and months for these bouts. They are competing in the toughest sport out there,” said Palmer. “Our club is a very positive outlet for the young people of our community. The gym is positive, diverse and full of hard working people that are trying to do good things.”

Cloudy with periods of rain. Low 48F. Winds light and variable. Chance of rain 80%. Rainfall around a half an inch.

Officer's kindness is reminder of service