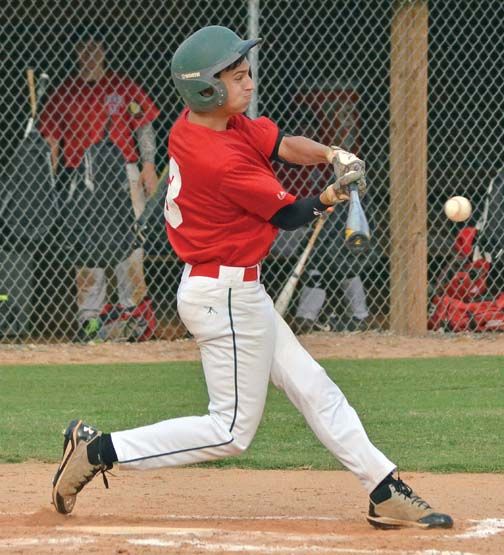 CAMDEN REAVIS makes contact with a pitch during the first game of Post 31’s doubleheader against Davidson on Monday night. 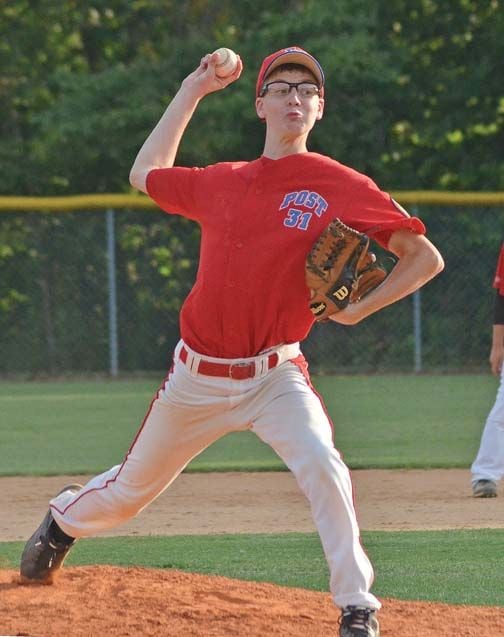 PITCHER GRANT STRADER allowed just one hit and struck out five in three innings of relief in game one. 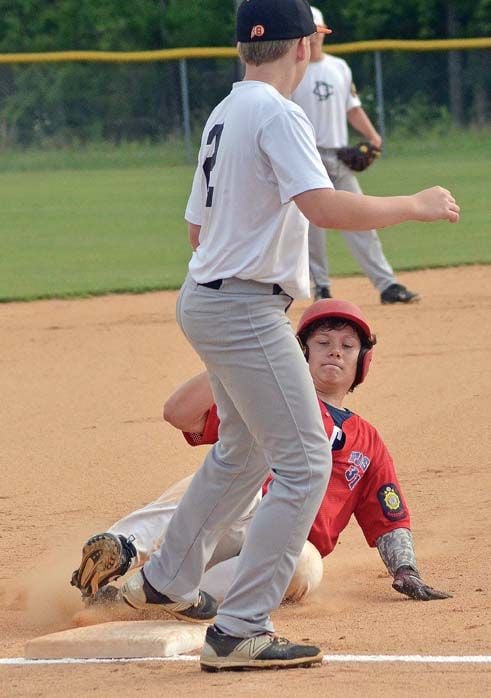 CAMDEN REAVIS makes contact with a pitch during the first game of Post 31’s doubleheader against Davidson on Monday night.

PITCHER GRANT STRADER allowed just one hit and struck out five in three innings of relief in game one.

The games in Monday night’s doubleheader in Moravian Falls between Wilkes County Post 31 and Davidson Post 8 couldn’t have been more different.

Pitching took center stage in a 3-2 Chiefs’ victory in game one. In the second game, a 13-8 Patriots’ victory, Wilkes County jumped out to an early lead and battled back late to put the win away.

“It was night and day. The first game, we played well but again, the errors came back to haunt us. We had one big inning where we had bases loaded and got nothing, that was costly,” Post 31 Assistant Coach Ron Pruitt said. “In the second game, we did a lot of backside hitting, played a lot of small ball and we did what we had to do to win.”

Davidson, which picked up its fourth win of the summer, took a 1-0 lead in game one after Marc Anderson reached base following a dropped third strike. Chris Baka, who reached on a single to start the inning, scored following an errant throw to first base.

During the inning, Post 31 starting pitcher Tanner Sheets was removed from the mound in what Pruitt called “a precaution” when the rising Alleghany senior felt some discomfort in his pitching arm.

After starting the summer with more than 30 players, Post 31 has seen its pitching depth tested over the past few weeks.

“I thought our pitchers did well; we had a couple of times where we had trouble throwing strikes but some of these guys that are pitching this summer, haven’t thrown since the high school season,” said Pruitt. “Now that the numbers are dwindling down, we’re having kids that were relievers that have to start now. Everybody has to step up and take a role and they’re doing a good job of it.”

Wilkes County battled back thanks to RBI singles from Lance Parker and Alec Baldwin to tie the game at two after three innings. Tate Leonard gave the Chiefs the go-ahead run in the top of the fifth on an RBI single.

Parker and Baldwin helped the Patriots get out to an early 4-0 lead in game two. Baldwin put Post 31 on the board with an RBI single before Parker added a bases clearing triple.

Parker is one of the few upperclassmen on the team, in turn, Pruitt has put a lot of pressure on the rising Wilkes Central senior to be a leader. Parker, who finished with five RBI in the twin bill, went 3-for-5 at the plate.

“Lance is one of our older guys, along with Tanner, they’re the only upperclassmen that we have and they’re both being leaders on the field,” said Pruitt. “Lance stepped into a big situation in the second game and made something happen.”

Wilkes County looked to be out of the third inning unscathed when Dylan Rabon hit a routine popup just in front of pitcher’s mound.

A communication breakdown allowed the ball to drop in fair territory and score one run. That led to three more runs in the inning.

“That was a simple mishap. You can let something like that happen and you can dwell on it,” said Pruitt. “We didn’t, we came out fired up, got the leadoff man on, everybody got riled up and I told them don’t make the last out.”

The Patriots trailed 7-6 in the bottom of the fourth but rebounded thanks to a two-out rally.

Isaiah Moree, Post 8’s starting hurler in game two, struck out Baldwin but he reached base on an errant throw. Two runs scored on the play and Sheets put the Patriots ahead 10-7 with a two-run single.

In addition to out-hitting Davidson 12-6, Post 31 swiped eight bases in the doubleheader, a key component that played into Pruitt’s strategy for the contest against the Chiefs.

“I wanted them to be very aggressive on the bases. You can make things happen on nights when you’re not real strong with the bats. Their pitchers threw a lot of off-speed, breaking stuff and kept us a little off,” Pruitt said. “But when we got runners on, I tried to make things happen, it speeds the game up and possibly forces them into mistakes.”

Baldwin, Brooks and Ethan Adams had two hits apiece in the doubleheader for the Patriots, who traveled High Point-Thomasville on Tuesday night. They’ll return home tonight at 7 for their regular season finale against Mocksville.

A few clouds from time to time. Low 56F. Winds light and variable.