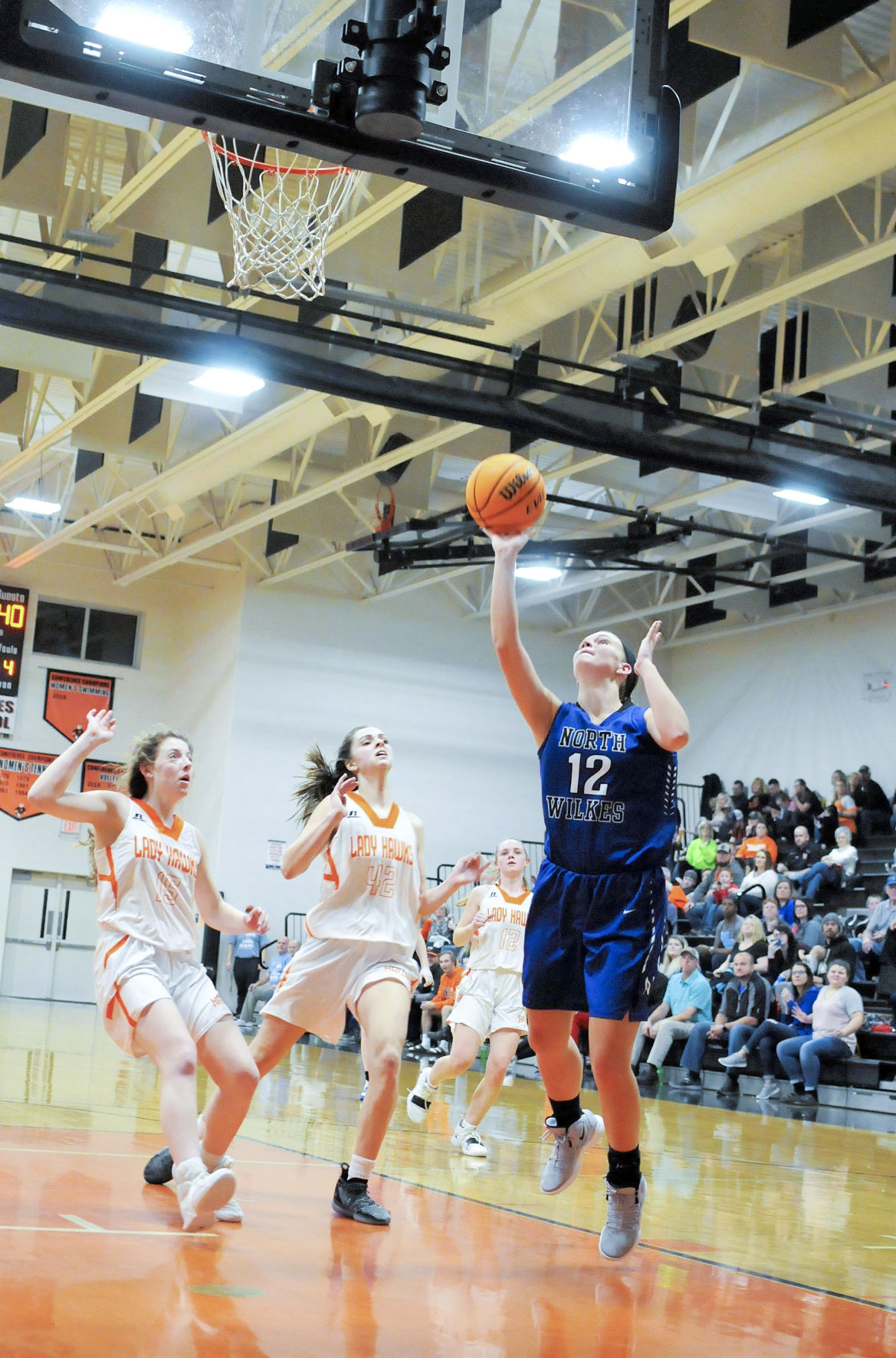 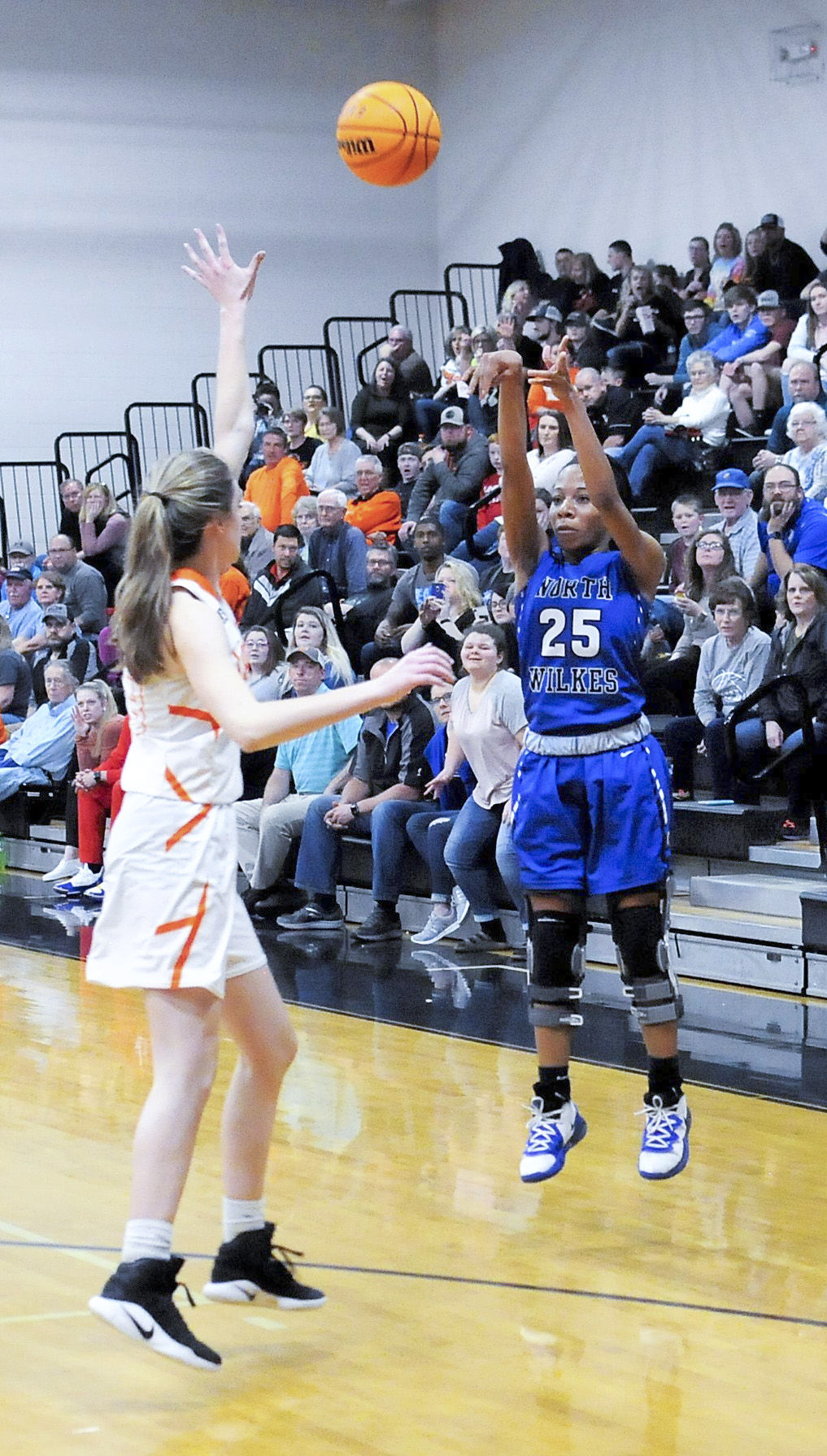 And North Wilkes delivered a message to the Mountain Valley Athletic Conference with the league tournament fast approaching — despite their record, don’t sleep on the Vikings.

Martin sank a game-winning 3-point shot from the left wing with 7.8 seconds left in regulation as the Vikings stunned West Wilkes 54-51 in a thrilling county rivalry matchup.

The senior’s sensational shot came from a player who — along with several teammates — had missed a large chunk of the 2019-20 season.

But Martin’s shot helped remind the fans in attendance Tuesday that the Vikings started off the year 7-2 before dropping eight of 12 after being bitten by the injury bug. And with the team a bit healthier, the Vikings were able to spring the upset.

The winning shot came out of a baseline out-of-bounds play on the right, a play that saw the inbounded ball swing to the left, where Martin stood unguarded.

“We wanted Liz to have the ball in her hands at the end,” said North Wilkes Head Coach Steven Phillips. “We didn’t necessarily call for her to take a three, but we knew we wanted her involved. And she was incredibly composed on the shot. She didn’t rush it. And it was very gratifying to see her make it, especially considered she’s just coming back from injury.”

“We felt like we came in with a really good game plan,” said West Wilkes Head Coach Allie Greene. “Unfortunately, we did not execute it.

“For instance, we told our kids the importance of getting out on their shooters, and right off the bat we give up two three-pointers (to Martin and Shelby Roal). And from that point on, we failed to execute the plan we drew up.”

The Blackhawks were able to forge the comeback, however, thanks in large part to big second halves from Jamilyn Wilcox and Carson Ledford. Ledford scored 10 of her team-high 16 points after halftime, and Wilcox added eight of her 14 points in the second half.

And it was Wilcox, with a mere 24 seconds left in the fourth, who delivered the three-pointer from the right side that tied the contest up at 51-all.

“We played extremely hard to get back in the game,” said Greene. “Unfortunately, after we tied the game we made some mental mistakes and some break downs defensively that hurt us.”

West Wilkes dropped to 16-4 and 9-3 in league play with the loss. Greene pointed out after the game that free-throw shooting was a factor, as the Hawks missed 13 attempts from the charity stripe on the evening.

“We’ve lost four games this season, and in every game the margin could’ve been made up easily by foul shots we missed,” said Greene.

North played the second half without the services of starter McKenzie Johnson, who suffered a hard fall at the end of the first half and did not return.

“That was tough,” said Phillips. “She’s a great shooter and a great defender. But the kids who came in for her did a nice job stepping up and accepting the challenge. I’m super proud of the kids, especially after losing the lead and having to make the play late for the win.”

West Wilkes next faces Alleghany tonight at home, while the Vikings will travel to Starmount.

Tuesday was West’s Special Olympics game, sponsored by the school’s Unified Champions club. During the four games money was raised for a special get together that will feature Special Olympics athletes from both North Wilkes and West Wilkes. The night was organized by Hawks’ point guard Jamesyn Bell as part of her senior project and $532.24 was raised for the get together on the evening.

West Wilkes did take the night’s JV contest, beating North 34-32 in overtime. Allison Little hit the game-winning points from the free-throw line — the only points scored in extra time — to preserve the win.

The Blackhawks led by a score of 18-8 at halftime, but a Vikings comeback led by Zoie Wells forced the overtime. Little finished with nine points and Tori Teague led the Hawks with 10. Wells poured in a game-high 14 points, and Brook Settle and Beth Settle scored eight apiece for North Wilkes.

Intervals of clouds and sunshine. High near 55F. Winds light and variable.

Partly cloudy skies early will give way to occasional showers later during the night. Low 42F. Winds light and variable. Chance of rain 40%.

A few clouds from time to time. Low 29F. Winds light and variable.