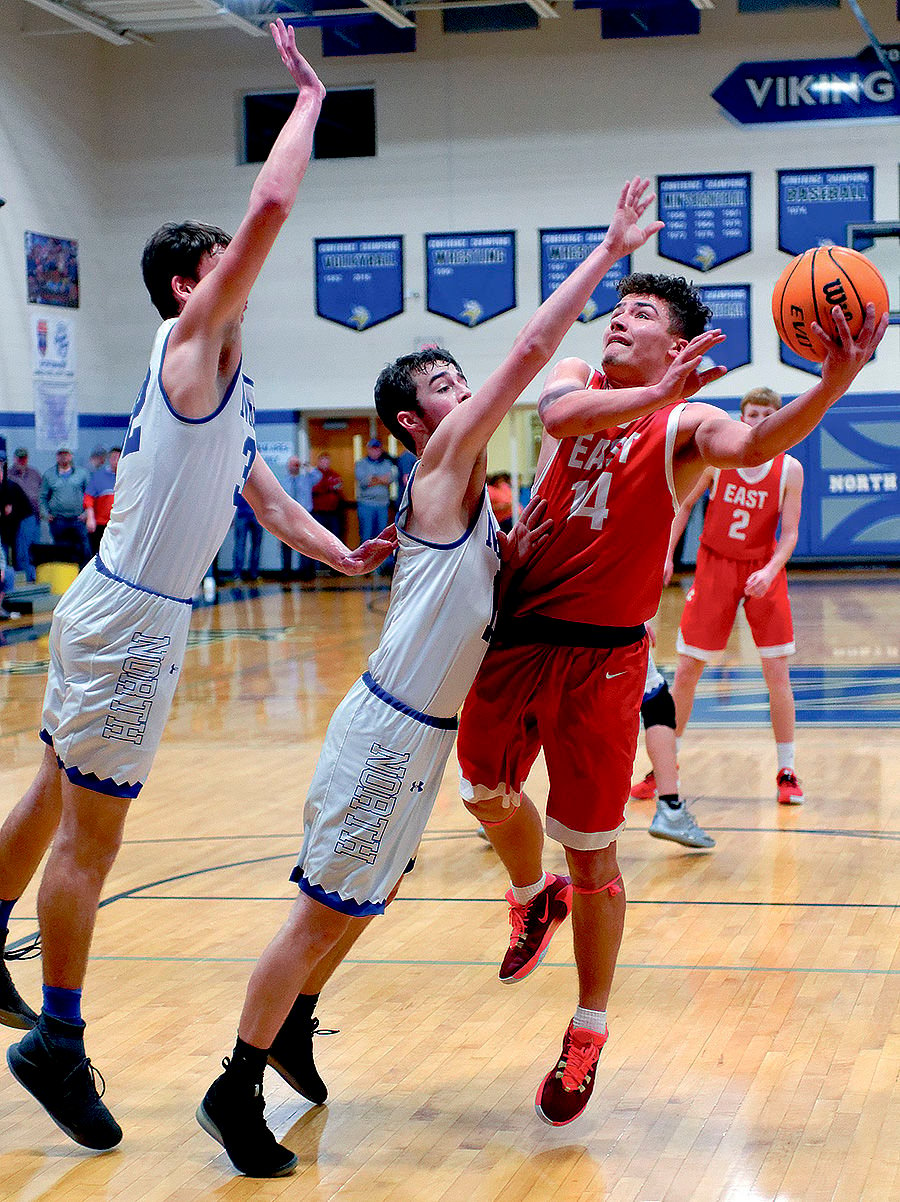 EAST WILKES’ Caeden Howell puts up a shot left-handed against North Wilkes’ Lyle Watkins and Trent Huffman in the first half. Howell scored 16 of his career-high 18 points in the fourth quarter as the Cardinals rallied to force overtime. 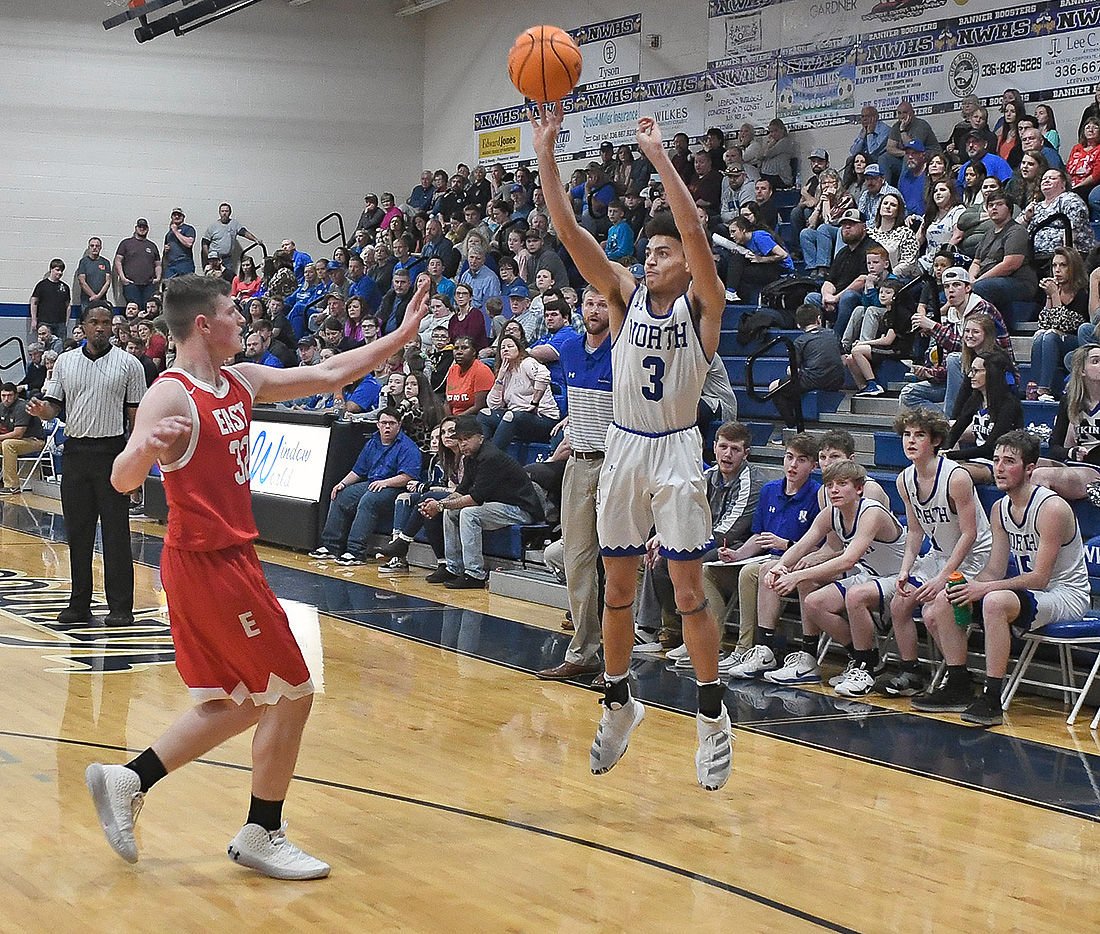 North Wilkes’ Zack Carlton shoots a 3-pointer in the second half as East Wilkes’ Brayson Church defends. Carlton scored 15 points for the Vikings. 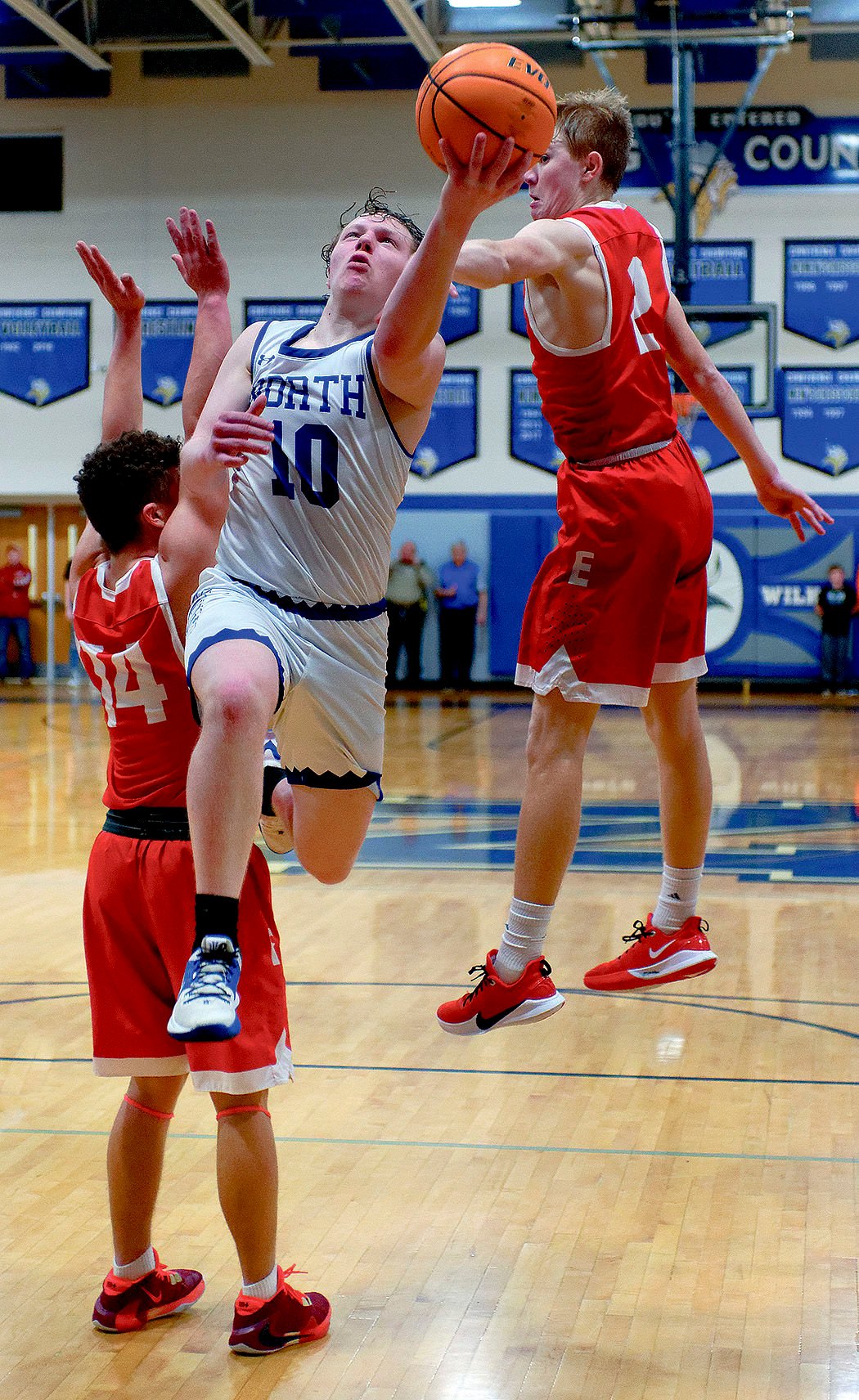 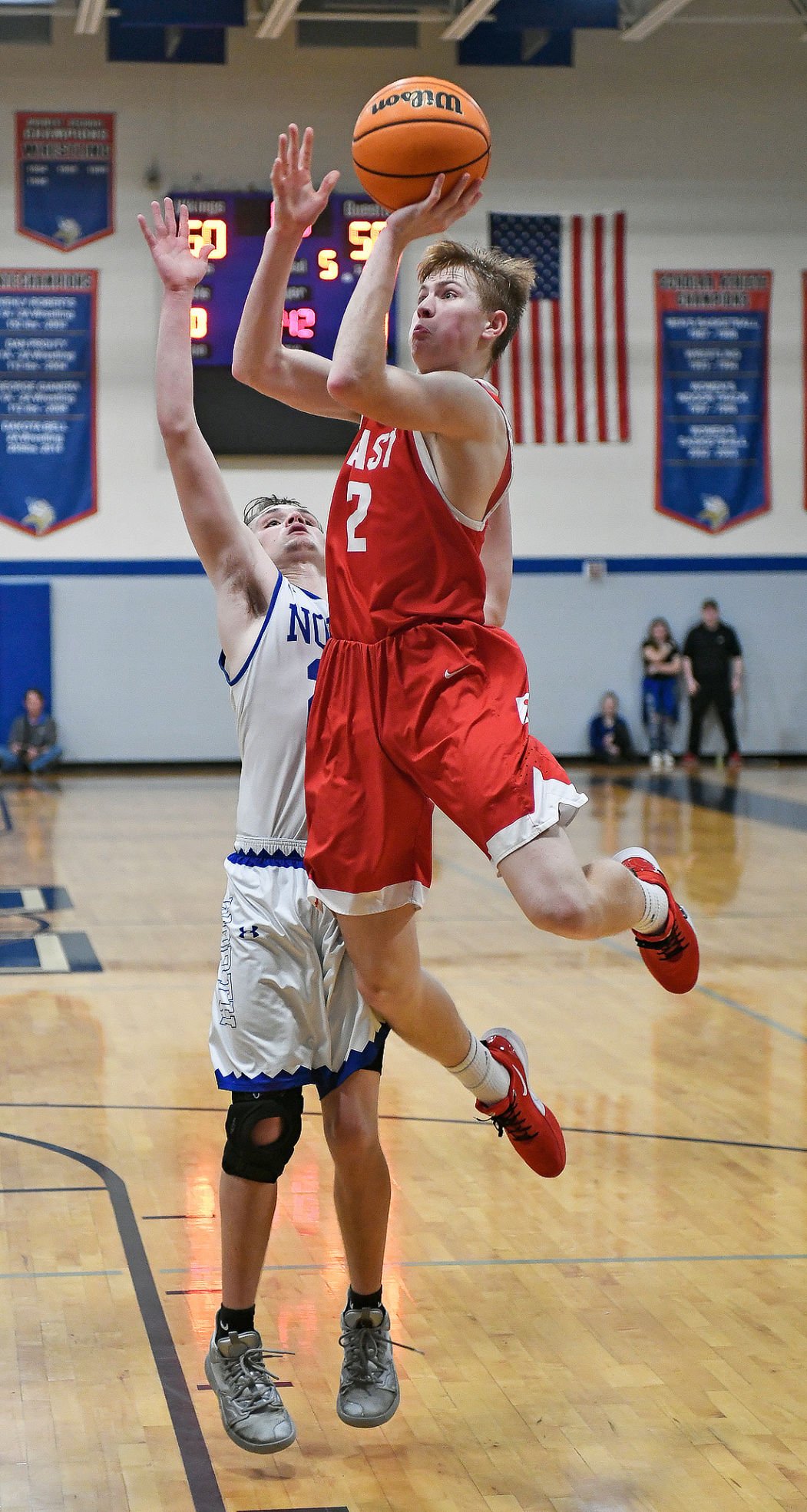 THE LAST SHOT—With his team trailing by two points, East Wilkes’ Trey Lambert puts up a shot against North Wilkes’ Trenton Sidden in the waning seconds of overtime.

EAST WILKES’ Caeden Howell puts up a shot left-handed against North Wilkes’ Lyle Watkins and Trent Huffman in the first half. Howell scored 16 of his career-high 18 points in the fourth quarter as the Cardinals rallied to force overtime.

North Wilkes’ Zack Carlton shoots a 3-pointer in the second half as East Wilkes’ Brayson Church defends. Carlton scored 15 points for the Vikings.

It was déjà vu all over again for the North Wilkes boys against East Wilkes.

But this time with a twist.

Playing on his senior night, Matthew Holloway scored six of his 15 points in overtime, and the Vikings rallied for a lead and then held on for a 60-58 win over the Cardinals in the final regular-season game for both teams, Tuesday night in Hays.

It was the second time in as many meetings this season that the game was decided in overtime.

North Wilkes snapped a three-game losing streak and won for only the third time in its last 13 games, improving to 7-17, 3-11 in the Mountain Valley Conference.

East Wilkes, which started play with a three-game winning streak—its longest such streak in four years, fell to 7-15, 4-10 in the conference.

Zack Carlton’s 25-footer from the top of the key was off the mark to send the game to overtime.

In the first meeting in Ronda on Jan. 17, the Cardinals used an 11-0 run in the extra period to take control of what became a 65-54 win. In the rematch, the Vikings jumped ahead by scoring on their first three possessions.

Junior Colby Brown hit a free throw—his only point of the game—to put the Vikings ahead 52-51. Holloway hit a driving shot off the glass, and a possession later Carlton followed Holloway’s miss to give North Wilkes a 56-51 lead at the 1:43 mark.

“That was important, because it gave us confidence to keep shooting the ball and not be passive and turn the ball over,” Holloway said of the opening sequence of overtime.

Holloway, who scored a career-high 25 points in the first meeting, was one of three players to score 15 points for North Wilkes, along with Carlton and senior Trent Huffman.

A Holloway free throw with 36 seconds remaining made it 57-53, but Tate Samples followed a miss for East Wilkes, and a possession later the junior hit a 3-pointer from the right wing off a Dylan Ward assist to pull the Cardinals within 59-58 with eight seconds left.

Holloway was fouled with six seconds to play. He hit his first free throw for a two-point lead, but missed the second. The Cardinals’ Trey Lambert drove from the left wing against Trenton Sidden, but his short floater from just left of the lane missed as time expired.

Lambert, who scored a career-high 36 points in the first meeting, finished with 18 points.

“I thought we really needed something positive to happen to start overtime,” said Logan Call, the North Wilkes coach. “We ran a couple of sets, executed the sets and got a good look, got fouled. We got Matthew on a little Iverson cut for a layup and that gave us the momentum we needed.”

With just under seven minutes to play in regulation, the Vikings were in control, leading 40-28 after back-to-back baskets by Lyle Watkins.

And then the fourth quarter happened.

Over the next four-plus minutes, the Cardinals outscored the Vikings 16-1 to take a 44-41 lead. The catalyst for the run—the fuel for the fire—was Howell.

The senior guard scored 16 of his career-high 18 points in the fourth quarter, and as the point man on the Cardinals’ press, he had a pair of steals and a role in the Vikings’ nine fourth quarter turnovers.

Howell had a 3-pointer and three 3-point plays in the quarter. The second—which came after his steal—gave East Wilkes its first lead of the second half at 42-41.

“Caeden stepped up defensively, and he hit some shots that we don’t normally count on him to hit,” said Wes Rousseau, the East Wilkes coach. “He was the impetus for the comeback as far as the press goes…. And what a lot of people I don’t think realize… is that he played the entire fourth quarter and the vast majority of overtime—until we had to foul—with four fouls.

The Cardinals’ Ledger Blackburn tied it at 46, and Holloway gave the Vikings a 48-46 lead. Carlton made it a four-point game with 35 seconds to play, but Lambert hit two free throws a possession before Howell’s third 3-point play tied it.

East Wilkes will finish sixth after back-to-back last-place finishes and four wins combined in the past two seasons.

For Holloway and fellow seniors Huffman, Watkins and Dylan Church, it was a positive way to end the regular season.

“It was really big, because we haven’t had a lot of wins this season,” Holloway said. “This one meant a lot to us. And we’re a good team—we deserved to win.”

And Call said, “Give credit to our guys, our seniors. It wasn’t pretty, but at the end of the day, when we needed to make plays, we made plays.”