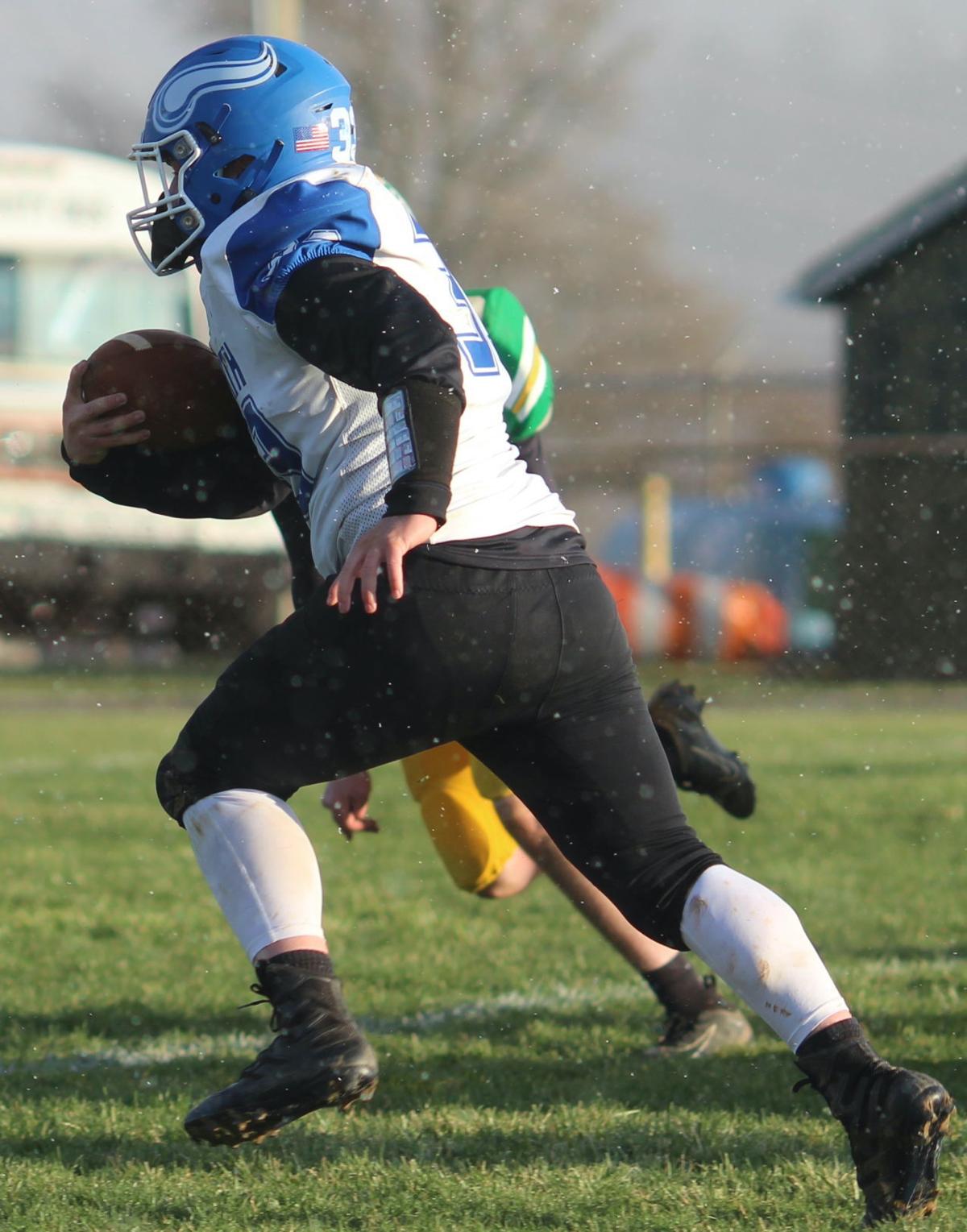 North Wilkes senior running back Ben Winters scores on a 9-yard touchdown run, the difference in the Vikings’ 7-0 win Thursday at Alleghany. 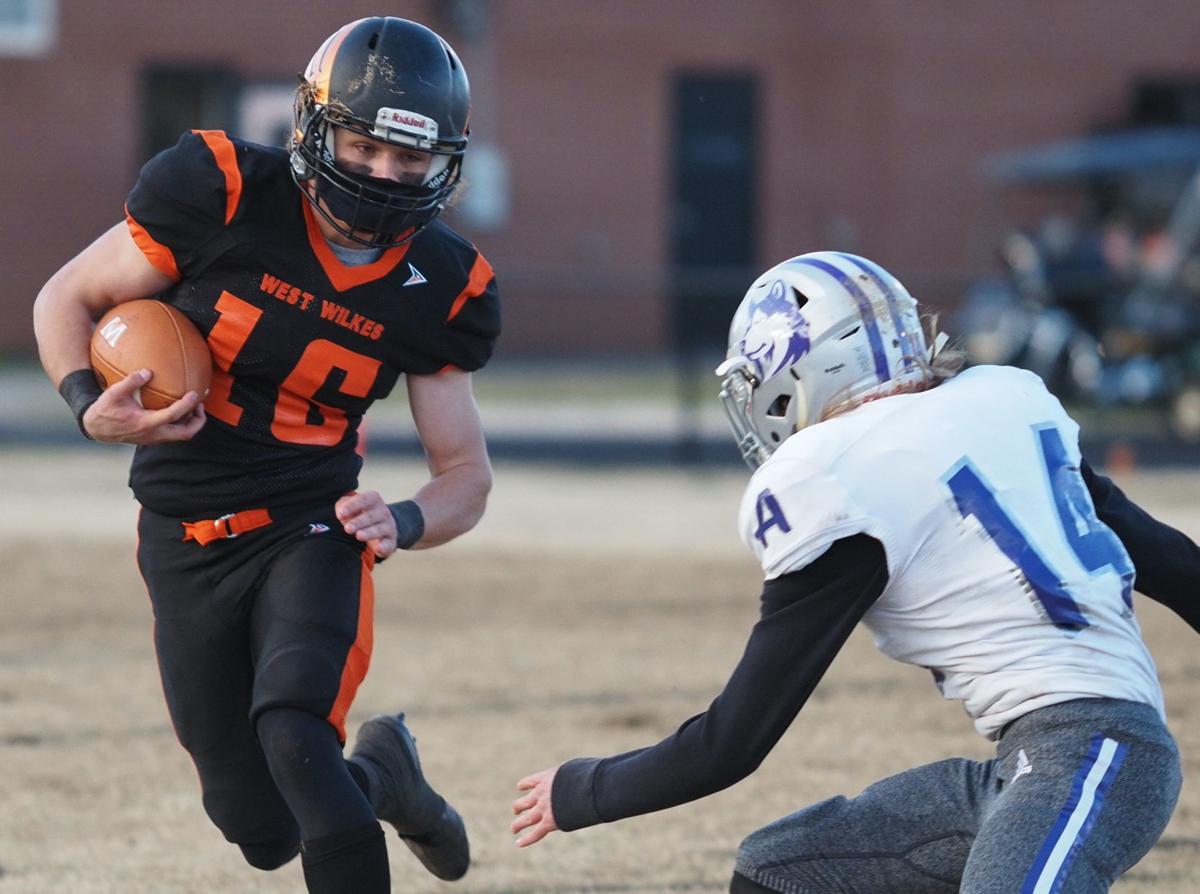 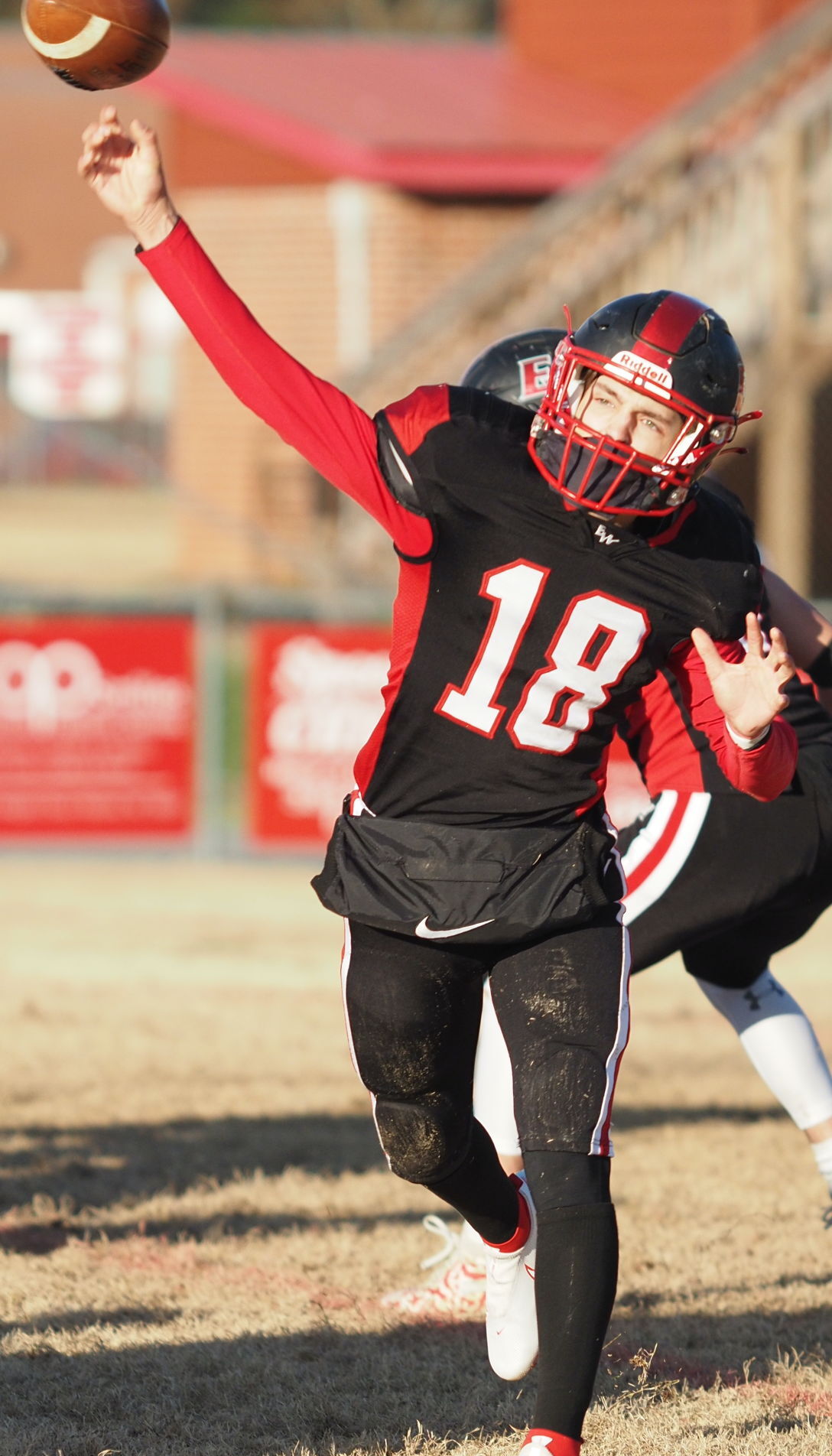 East sophomore quarterback Briggs Gentry throws a pass downfield in the first quarter of the Cardinals’ 30-6 loss to Elkin in Ronda on Friday.

North Wilkes senior running back Ben Winters scores on a 9-yard touchdown run, the difference in the Vikings’ 7-0 win Thursday at Alleghany.

East sophomore quarterback Briggs Gentry throws a pass downfield in the first quarter of the Cardinals’ 30-6 loss to Elkin in Ronda on Friday.

North Wilkes picked up its first win of the season by shutting out Alleghany, 7-0, in snowy Sparta on Thursday.

The Vikings scored on a 9-yard rushing touchdown by senior Ben Winters and point-after kick by Solomon Panneton on the last play of the first quarter.

North improved to 1-5 with David Wojtecki’s first win at the helm of the program. The Trojans also stand at 1-5 in the Mountain Valley 1A/2A Athletic Conference.

“I thought our guys did a great job controlling the line of scrimmage,” said Wojtecki.

The Vikings have won four of the last five games against the Trojans. North also shut out Alleghany (50-0) in 2017.

The Eagles jumped on the Rams early and led 30-0 at halftime.

“We played very well offensively and defensively; it was probably our most complete game of the year,” said Ron Turner, Central’s head coach. “We’ve gotten three starters back over the last weeks, which definitely helps. And we got out of this game healthy, so I feel like we’re playing well.”

Senior running back JoRaye Morrison had another big game for the Eagles, rushing 31 times for 328 yards and five touchdowns, four of which came in the first half. Morrison also converted three two-point conversion runs before the break to account for all the Eagle scoring prior to halftime.

Central quarterback C.J. McGill completed 3-of-4 passes for 34 yards and Anthony Graham connected with Terry Hayes for a 40-yard catch. Ayden Bynum rushed 11 times for 69 yards and a score.

Morrison tacked on a 56-yard scoring run in the third quarter and Bynum later capped the Central scoring with a 1-yard run.

The Eagles improve to 4-2 in the MVAC while the Rams slide back to 3-3. Central has won five of its last six matchups with Starmount.

Central will conclude the regular season by hosting East Wilkes (2-4) at 7 p.m. Friday. “Coach (Jonathan) Wilmoth does a really good job, and they put it to us last year (39-33 in Ronda),” noted Turner. “We’ll have to be ready to play.”

League-leading and undefeated Ashe County posted a 55-6 win at West Wilkes on Thursday.

The Huskies led 21-6 at halftime and extended the lead by outscoring the hosts 34-0 in the second half.

“It was the same as last week—our defense played very well early, but we didn’t get any help from the offense, and eventually we wore down,” said West Coach Phil Collett.

With 2:54 left in the first quarter, on fourth-and-goal from the 7, Ashe quarterback Dawson Cox connected with Austin Poe on the right side of the end zone. Timothy Peterson’s point-after kick made it 7-0.

An errant snap from center was recovered by the Huskies at the West 20-yard line. From the 11, Matthew Peterson rushed straight up the middle for a touchdown. The PAT spotted Ashe a 14-0 lead with 2:02 remaining in the first.

West scored its only touchdown on a 25-yard pass from junior quarterback Logan Wayne to sophomore receiver Shane Gragg, who came back to the underthrown ball to make the catch. The score came with 11:52 remaining in the second quarter.

“We have talented receivers like Shane and we could throw (more) if Logan wasn’t always running for his life,” said Collett. “We get (junior lineman) Gary Call back from injury this week, so that should help.”

A roughing the punter penalty against the Huskies gave West new life at the 18-yard line on its next possession, but Ashe’s Cesar Martinez then intercepted an underthrown Wayne pass intended for Jaheim McDougald and ran it back for a score. After the PAT Ashe led 21-6 with 6:46 left in the first half.

The Huskies found the end zone four times in the third quarter. Cox ran for a 3-yard score and connected with J.J. Mannan for a 60-yard scoring strike. Poe also returned an interception for a 50-yard touchdown.

A 20-yard aerial strike to Wesley Thompson completed the scoring with four minutes remaining in the game.

“Our biggest obstacle right now is the offensive line,” said Collett. “We’re just not strong enough and we get pushed around. We can’t run the ball against the better teams. Until we get bigger and stronger up front we won’t get where we want to be.”

With their fourth straight win over the Blackhawks, the Huskies powered up to 6-0 and clinched the MVAC title, which they shared last season with Elkin. The Blackhawks faltered to 2-4.

Elkin turned back East Wilkes in Ronda on Friday night, 30-6.

“We played hard, but we’ve got to start playing smart, and converting on third down,” said East’s coach, Jonathan Wilmoth.

The Buckin’ Elks led 14-0 at halftime and outscored their rival hosts 16-6 in the second half.

“You can throw out the records and lot of other things with a rivalry game like this,” said Scott Wood, the Elkin coach. “You’re always happy to come away with the win, even though (Friday) it was a little ugly.”

After a lost fumble and punt on East’s first two possessions, Elkin’s Brett Beaver rushed into the end zone from 13 yards out with 2:21 left in the opening quarter. Thomas McComb’s point-after kick made it 7-0.

Following offsetting interceptions by Elkin’s RaeJay Hincher and East’s Bryson Sidden and then punts by both teams, Beaver added a 4-yard rushing score with 2:05 left in the first half. The PAT by McComb ensured a 14-0 lead for the visitors at the break.

In the second half, Elkin’s Boone Beaver rushed for a 31-yard touchdown. The Buckin’ Elks got their final score on a 10-yard touchdown run by quarterback Jaxon Godbey, who, after taking a high snap, tucked in the ball and scored on a keeper.

The Buckin’ Elks rushed for 179 yards en route to 224 total yards on the night. Boone Beaver compiled 82 yards on 13 rushes while brother Brett totaled 80 yards on 15 carries. Godbey completed 8-of-16 passes for 45 yards.

Sophomore Gavin Dowell led the Cardinals with 11 tackles. Brayson Church, Titus Miller and Damion Spiva each had two tackles for loss for East.

Elkin improved to 5-1 and clinched the MVAC’s lone guaranteed 1A playoff berth. With the loss, the 2-4 Cardinals will finish with a losing mark for the second straight year and will miss the playoffs for the first time in 14 years.

“Offensively, we made too many mistakes to be where we want to be this time of year,” said Wood. “We have things we need to improve upon in practice before heading into the playoffs. We have a seasoned offensive line and they’ve been getting the job done.”