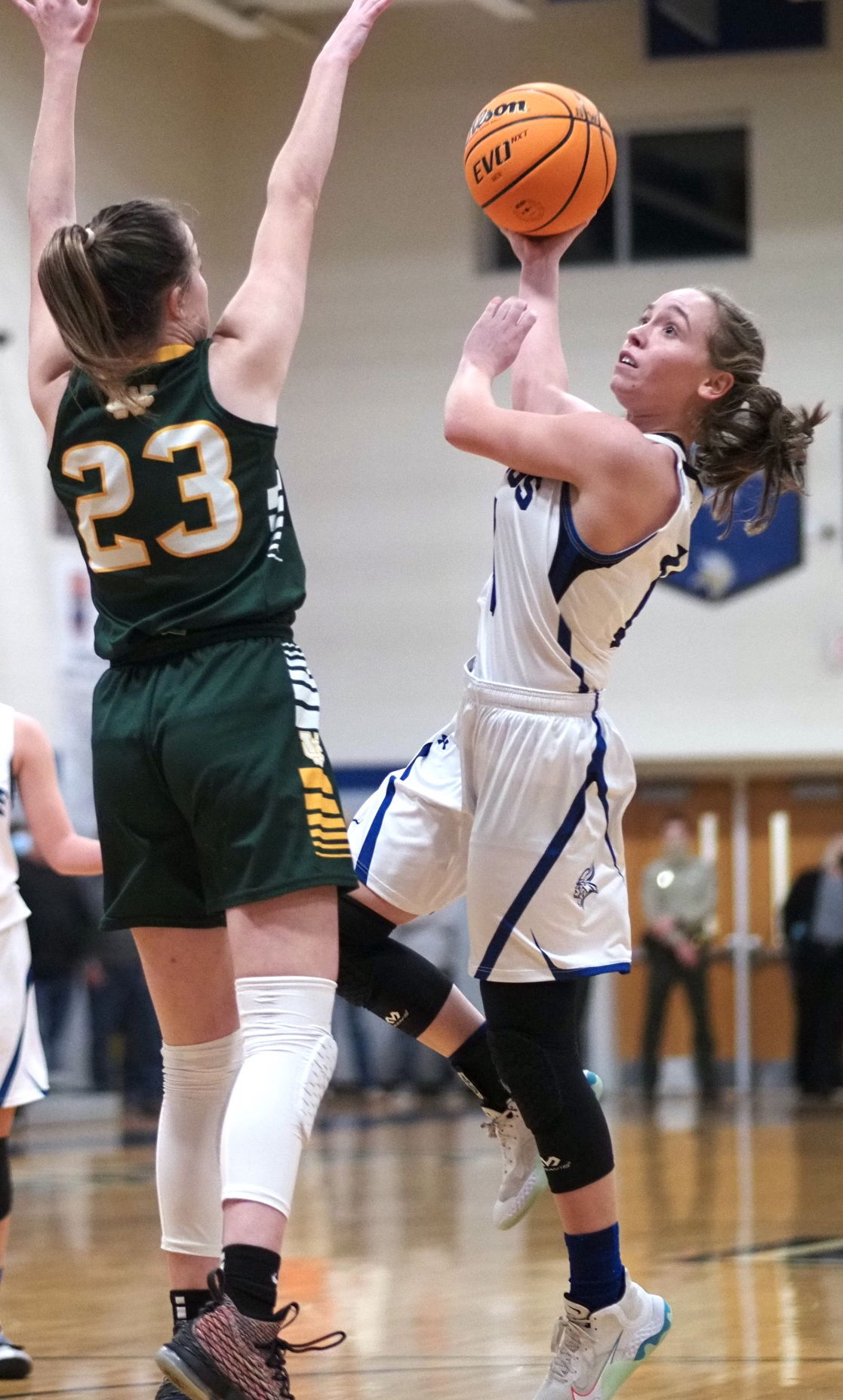 North Wilkes junior Beth Settle shoots a half-hook in the lane Friday as Wilkes Central sophomore Anna Rollins defends on the play. Settle had two points in her club’s 55-40 win in Hays. 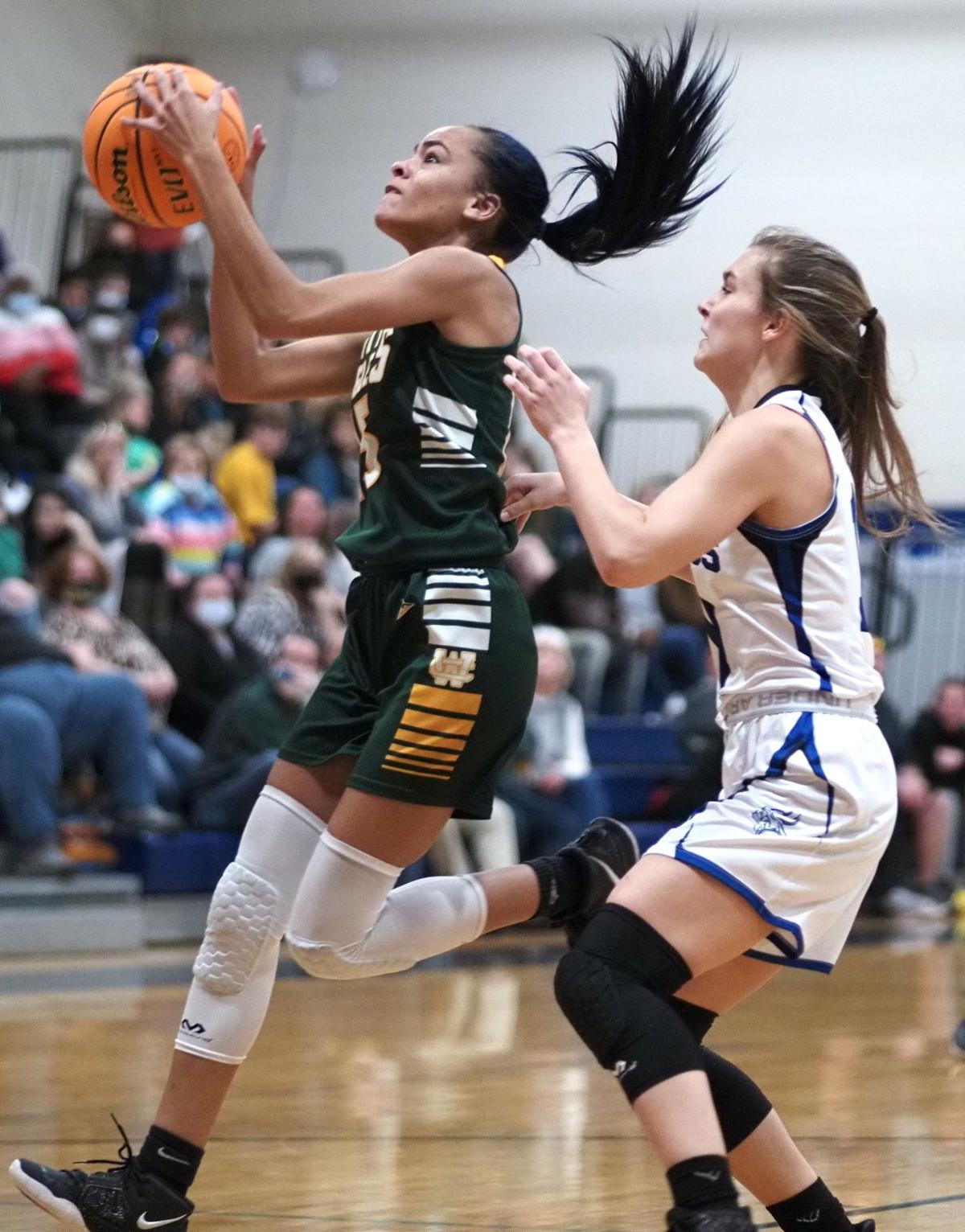 North Wilkes junior Beth Settle shoots a half-hook in the lane Friday as Wilkes Central sophomore Anna Rollins defends on the play. Settle had two points in her club’s 55-40 win in Hays.

The North Wilkes varsity girls took charge in the second half, resulting in a 55-40 win over Wilkes Central in Hays on Friday.

North remained at the top of the Foothills 2A Conference as the only team unbeaten in league play (3-0). The Vikings are 7-6 overall after snapping a five-game losing streak to the Eagles, who dropped to 7-4, 3-2.

“I was really proud of the girls and the toughness they displayed in the second half,” said Steven Phillips, North’s coach. “We rebounded better in the second half and defended well the entire game. We feel very fortunate to get this win over a very good Wilkes Central team.”

The Eagles led 19-18 at halftime but the Vikings rallied in the third quarter. Kate Brown sank a trey from the top of the key, off a feed from Natalie Mathis, giving the Vikings a lead (23-21 with 3:15 left in the third) they would never relinquish.

North’s Kyleigh Miller dropped in her second three-pointer of the game from the right elbow with 2:15 remaining in the third, and the Viking lead was stretched to 28-21.

Central’s leading scorer, Zoe Susi, picked up her fourth foul on a charge with 36 seconds left in the third, and the Vikings led 31-26 going into the final period. Susi would eventually foul out with 3:06 to play, having scored seven points—almost half her season average of 13.6—and collected five rebounds.

North’s Haili Shumate scored in the lane and Ralee Bare—who led all scorers with 19 and rebounders with 13—completed a three-point play for a 38-29 Viking lead with 6:43 to play. Bare helped maintain the North lead by making 6-of-7 free throws in the final quarter.

The hosts’ lead was stretched to 10 with 4:20 left in the game. The Eagles got as close as eight points with after Sarah Lowe—who paced Central with 11 points—completed a three-point play with under a minute to play.

The Vikings made a pair of treys from the top of the key—courtesy of Brook Settle and Miller—and enjoyed a 13-11 lead after a quarter of play. Susi’s steal and layin in the final 20 seconds of the quarter made it a one-possession game.

Central’s Makenna Freeman sank a three from the right elbow, off a feed from Susi, and the Eagles led 14-13 with 5:45 left in the first half. Then Anna Rollins scored on a drive in the lane for an 18-13 lead, prompting a Viking timeout, at 2:09 before the break.

Olivia Rhodes’ three-pointer from the right wing cut the Eagle lead to 18-16 with two minutes before halftime. Rhodes would finish with 10 points.

Mathis paced the Vikings with four assists and five steals.

The North Surry at West Wilkes game scheduled for Friday was postponed due to COVID-19 protocol within the West program. A rescheduled date had not been announced by press time Tuesday.

East Wilkes rolled to a 47-15 win over Alleghany in Sparta on Friday.

The Cardinals led 12-2 after a quarter of play and cruised to a victory that upped their overall and Northwest 1A Conference marks to 10-5 and 4-1, respectively. The Trojans slipped to 1-7, 0-2.

Phoebe Murphy led the Trojans with five points, all coming in the second half.

Alexander Central rallied in the third quarter to take a 48-35 nonconference win over West Wilkes in Taylorsville on Jan. 5.

The Blackhawks led 27-23 at halftime but the Cougars outscored the visitors 17-5 in the pivotal third period.

The Cougars bettered to 12-1 overall while the Blackhawks slipped to 5-8.

“We were successful in creating turnovers that led to a lot of transition points,” said East Coach Matthew Campbell. “We did a good job with ball movement in the half court as well.”

Peyton Mastin paced the Cardinals with 15 points. Briley Church scored eight of her 10 points in the first quarter, in which East raced out to a 19-5 lead.

The Eagles built a 12-point lead after three quarters of play and then withstood a Blackhawk rally in the fourth quarter.

“I was extremely proud of the girls for their effort,” said Central Coach Greg Davenport. “We played extremely hard. I thought our pressure was effective at times, which led to some easy baskets. To go on the road and get a win against a very good team is always a plus.”

Zoe Susi scored a game-high 19 points for Central, which included four three-pointers. She also led her team with six rebounds.

Davenport said he got “another lift” off the bench from Anna Rollins, who scored 10 points. Sarah Lowe chipped in with eight points while Makenna Freeman and Ryleigh Parker each had three steals.

A few clouds from time to time. Low 23F. Winds light and variable.

Partly cloudy in the evening with more clouds for later at night. Low 29F. Winds light and variable.