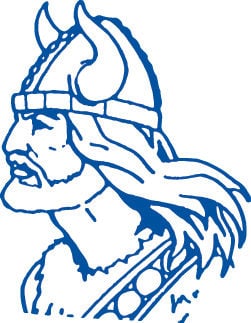 Liz Martin drilled a 3-pointer with six seconds left to play to break a tie ballgame and send the North Wilkes Vikings to a thrilling 54-51 upset victory over West Wilkes Tuesday evening in Millers Creek.

The Vikings led by as much as 12 early in the third quarter, but the Blackhawks battled back to tie the contest at 51-all when Jamilyn Wilcox hit a three from the right wing with 24 ticks on the clock.

North didn’t get a shot off initially on its next possession, but the ball went out of bounds on the baseline off West with 10 seconds left to play. A quick rotation got the ball to Martin after the inbounds on the left, and Martin hit the open triple to help the Vikings retake the lead.

West Wilkes had a couple of more chances late, but the Hawks first missed a would-be tying three. A subsequent jump ball gave possession back to the home team with 1.5 seconds left, but the Blackhawks couldn’t get off one last shot.

West Wilkes dropped to 13-7 and 9-3. Carson Ledford led the Hawks with 16 points, and Wilcox chipped in 14 in the losing effort.

The Mountain Valley Athletic Conference win snapped a three-game skid for the Blackhawks, who improved to 13-7 and 9-3 in league play.

The Hawks led by seven after one period of play, and outscored the visitors in every quarter but the final one, when the game was already decided.

Jacob Brown scored 20 points and Jackson Stinson chipped in nine in a balanced offensive effort. Eleven of the 12 players on the West roster scored at least a basket.

The Blackhawks were proficient at the free throw line, going 23-32, and from beyond the arc, sinking seven three-pointers on the evening.

North Wilkes fell to 6-16 overall and 2-10 in the Mountain Valley. Matthew Holloway paced the Vikings with 20 points, including four triples of his own, and Trent Huffman came off the bench to score 11.