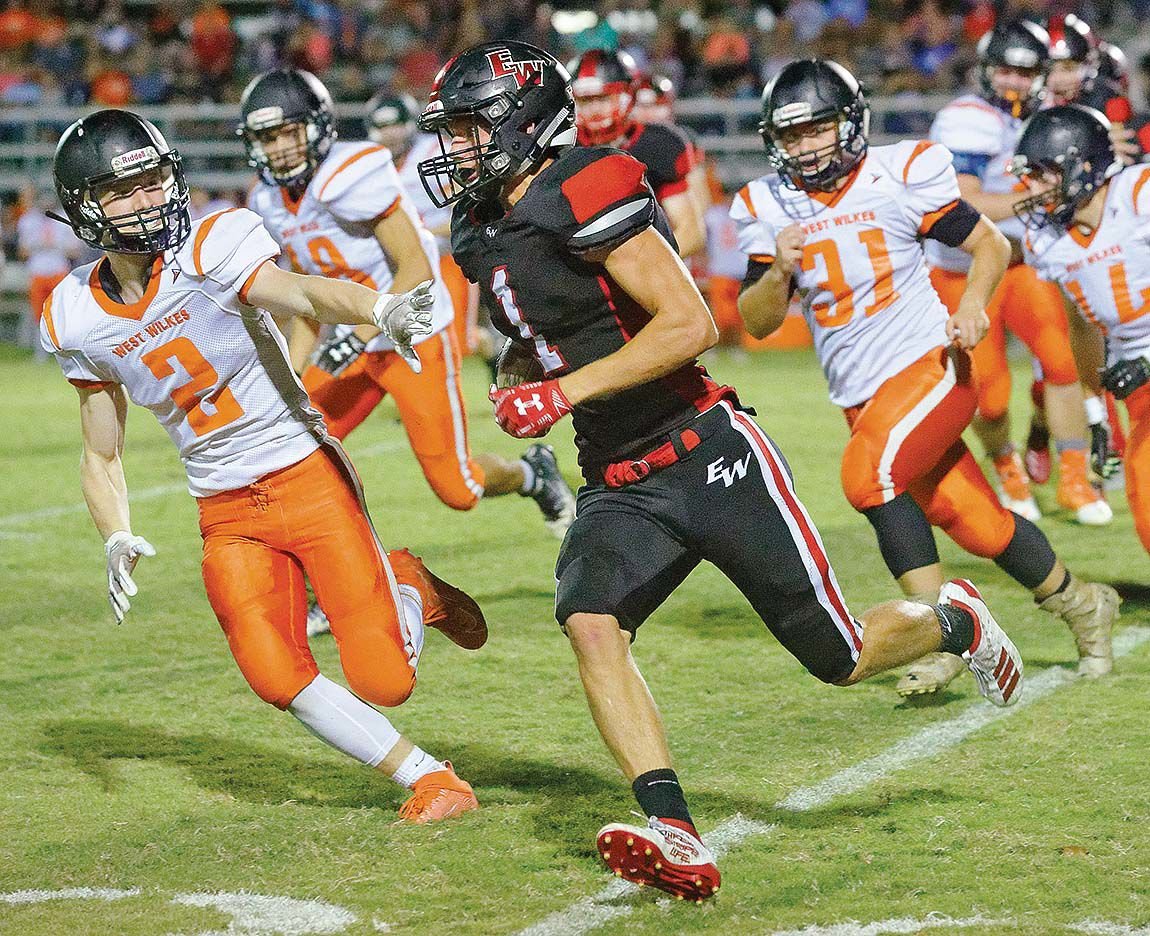 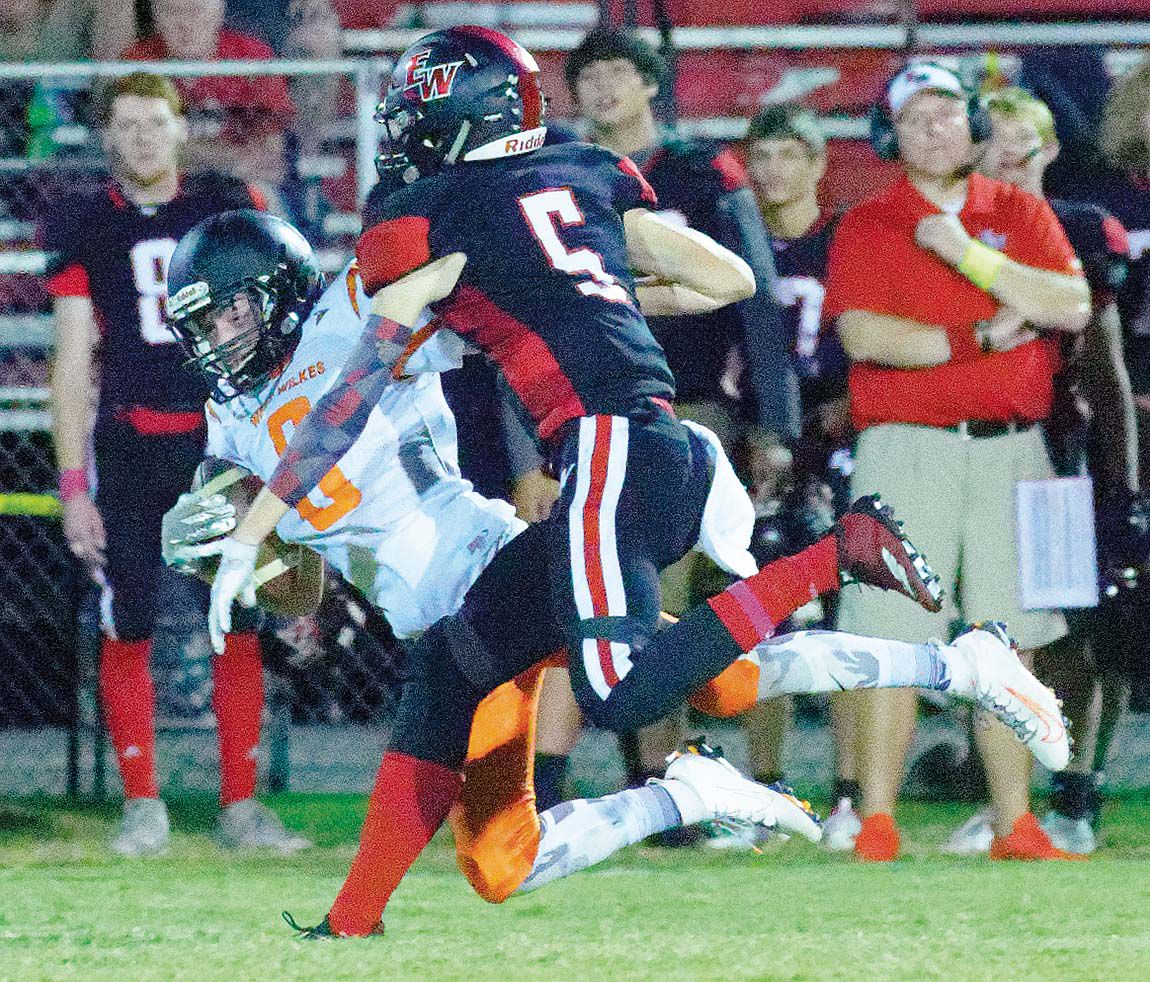 WEST WILKES receiver Shane Pellicano makes a one-handed catch in the first half while being closely defended by East Wilkes’ Trey Lambert. 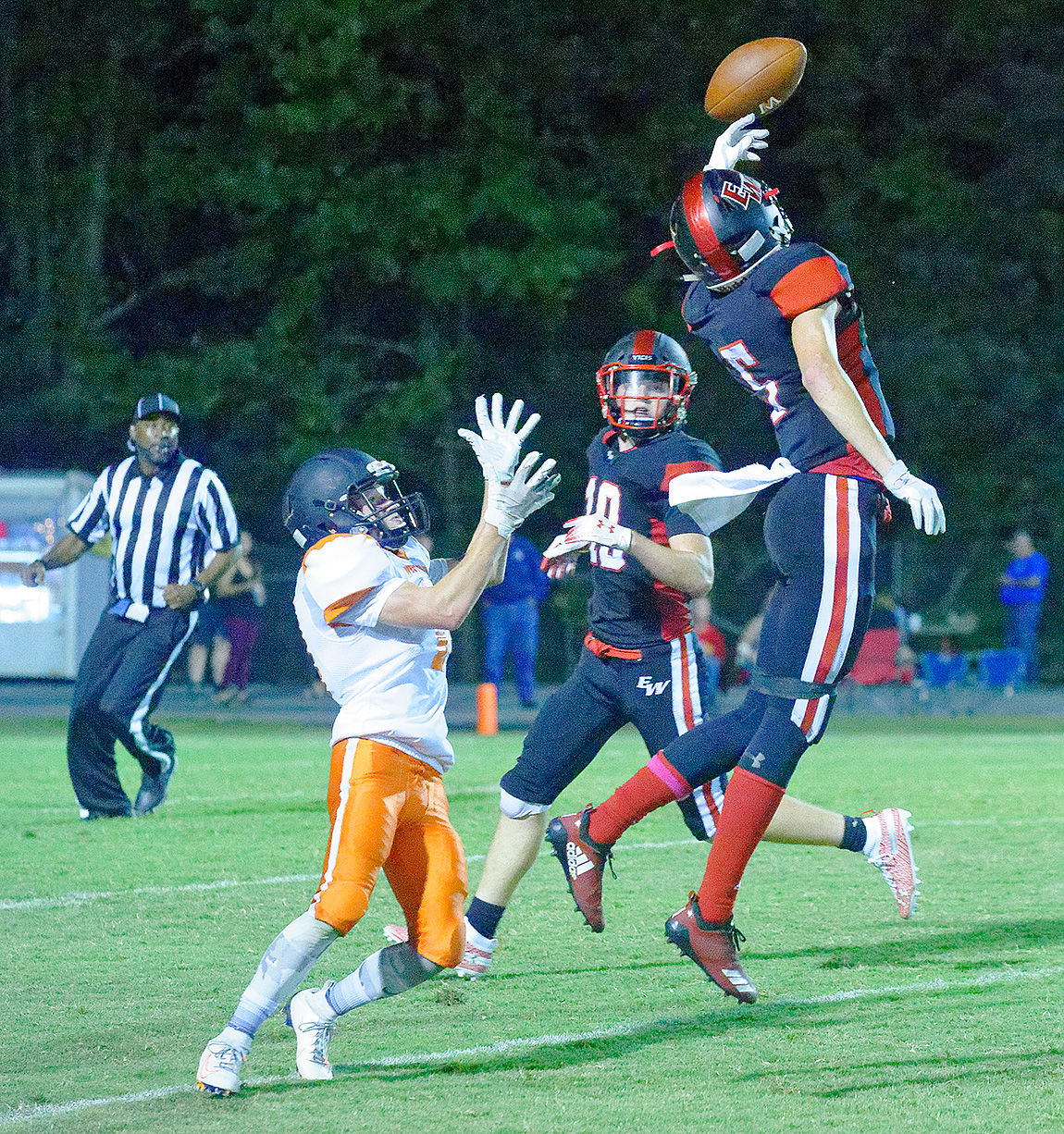 East Wilkes defensive back Trey Lambert tips up a pass intended for West Wilkes’ Shane Pellicano. Lambert caught the rebound for the first of his two interceptions. Brayson Church trails the play. 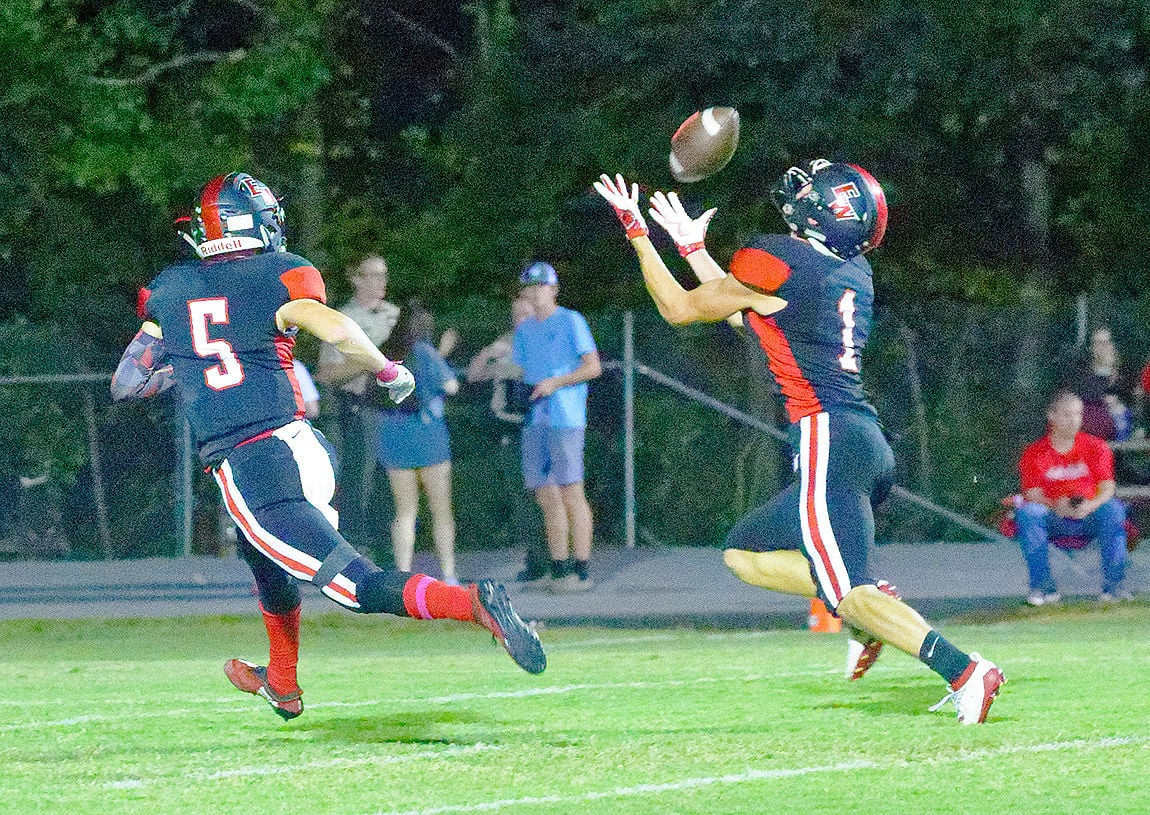 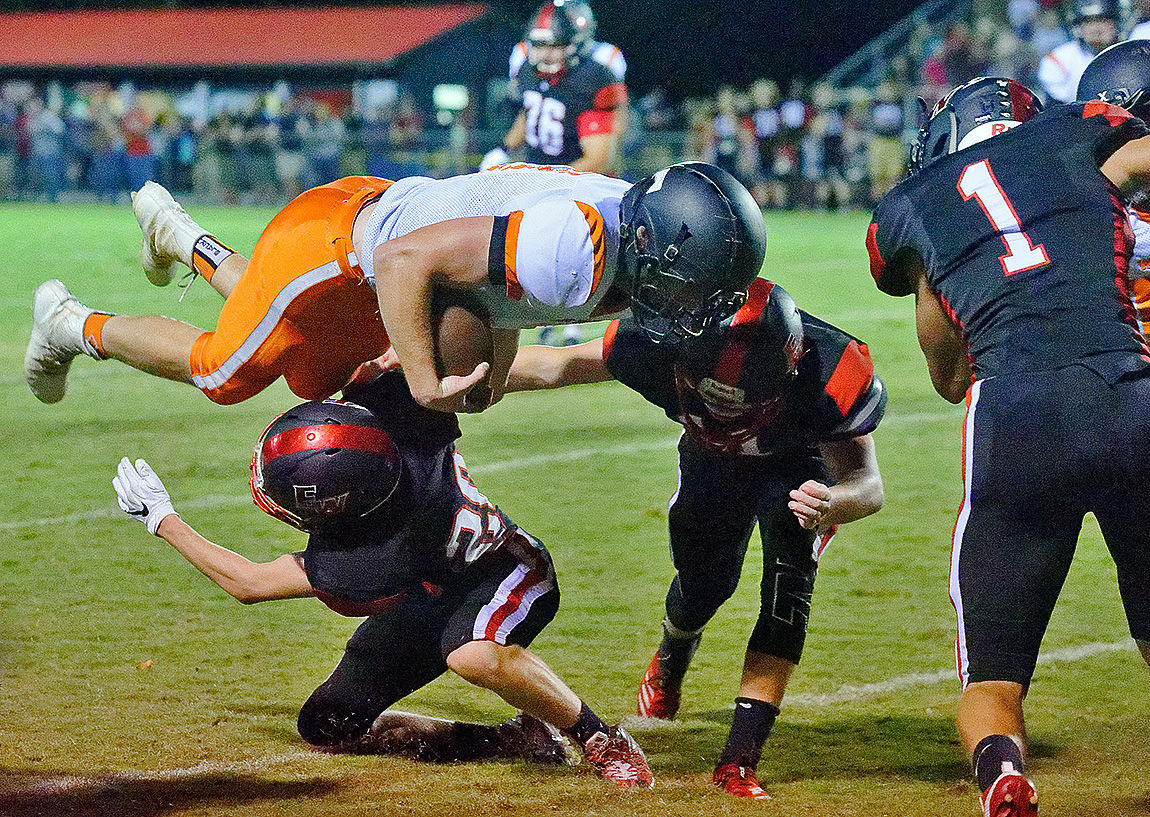 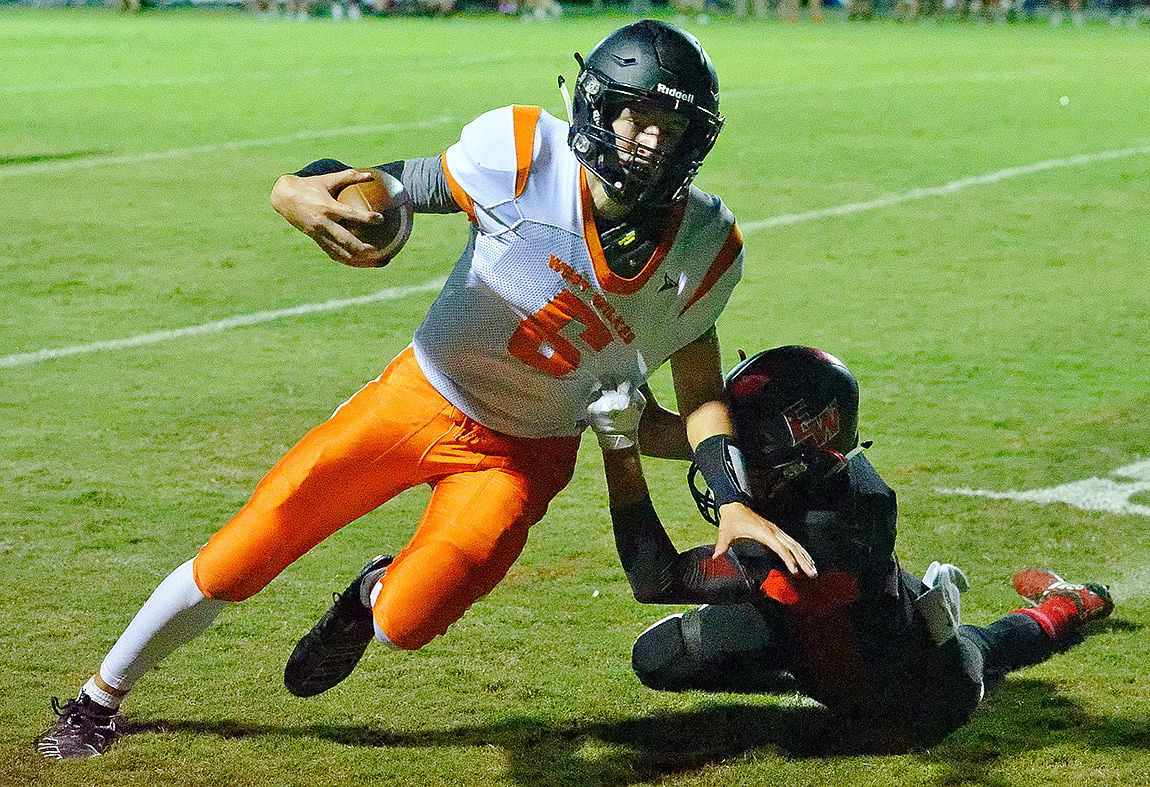 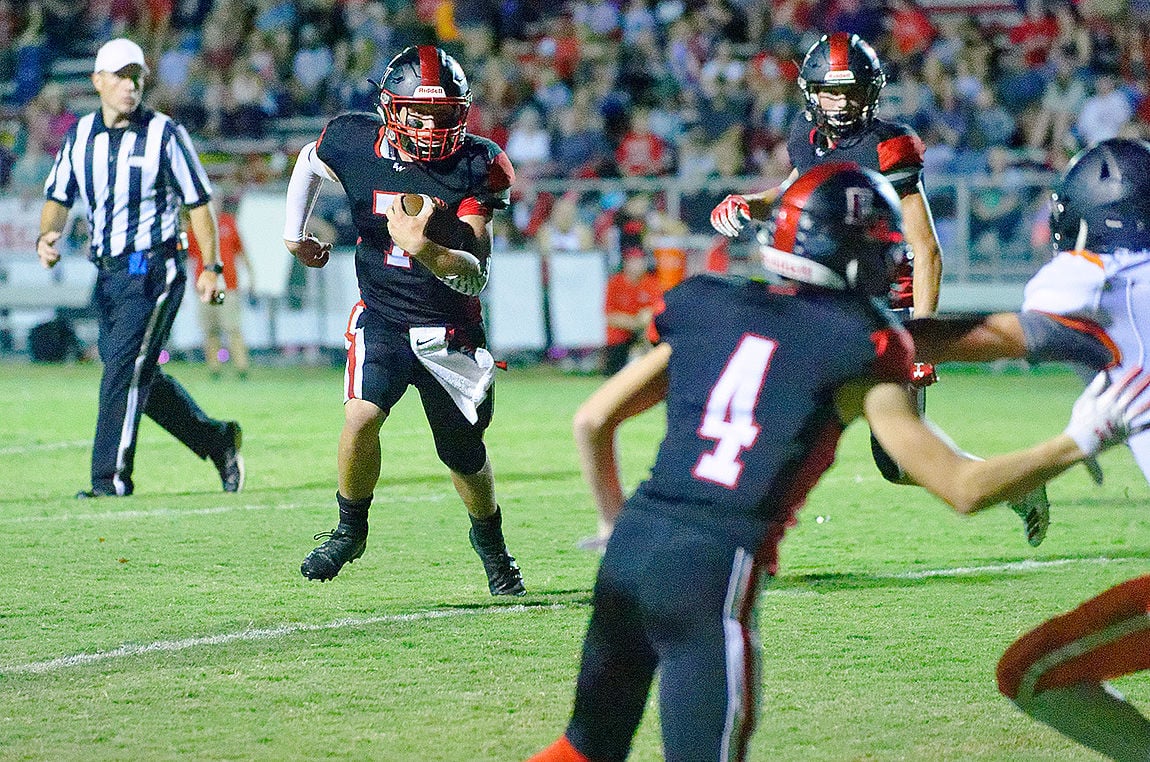 East Wilkes quarterback Caeden Howell turns the corner as Bryson Sidden looks to block on an 8-yard run in the second quarter. Howell made a diving attempt to reach the goal line pylon, but was ruled out of bounds at the 1-yard line.

WEST WILKES receiver Shane Pellicano makes a one-handed catch in the first half while being closely defended by East Wilkes’ Trey Lambert.

East Wilkes defensive back Trey Lambert tips up a pass intended for West Wilkes’ Shane Pellicano. Lambert caught the rebound for the first of his two interceptions. Brayson Church trails the play.

East Wilkes quarterback Caeden Howell turns the corner as Bryson Sidden looks to block on an 8-yard run in the second quarter. Howell made a diving attempt to reach the goal line pylon, but was ruled out of bounds at the 1-yard line.

East Wilkes and West Wilkes have been playing football against each other since 1970. And in the 49 years since the first of their 51 meetings, the teams’ overall records are separated by two wins.

Senior receiver Garrett Vernon had 317 all-purpose yards and scored three touchdowns, and the Cardinals snapped a three-game losing streak and got their first win in their new home black uniforms by beating the Blackhawks 41-36 Friday night at Ebb Tharpe Field in Ronda.

East Wilkes improved to 2-4, 1-1 in the Mountain Valley Conference, with its third straight win over the Blackhawks. It’s only the third time the Cardinals have won three in a row in the series and the first since 1997-99.

It is also the 230th win in program history.

West Wilkes lost its third straight game and fell to 1-5, 0-2 in the conference.

For the third straight game, East Wilkes was involved in a high-scoring shootout. The Cardinals lost the first two, giving up 54 points to Winston-Salem Prep and 50 to North Wilkes a week ago.

A special teams mistake allowed West Wilkes to tie the game in the third quarter. But the Blackhawks would not lead in the second half.

Vernon made sure of it.

Four plays into the Cardinals’ next possession, on fourth-and-one from midfield, Vernon took a snap from the Wildcat formation and burst free for a touchdown, giving East Wilkes a 35-28 lead after Jorge Lopez’s extra point.

After an exchange of turnovers and a punt, the Cardinals got the ball at the West Wilkes 33. Brayson Church carried for 5 yards and Vernon—who lines up both at receiver and in the backfield—broke free up the near sideline for 61 yards before being pushed out of bounds inside the 1-yard line.

Vernon said he just missed a personal milestone. “I think I was six points away from having 100 points against West in my high school career (both JV and varsity),” he said. “I’ve always had a good game against West.

“It’s all about the team,” he added. “It doesn’t matter who scores, as long as we win.

The Blackhawks, who scored over 30 points for the second time this season, answered with a 13-play drive. Senior quarterback Jackson Jarvis twice converted fourth down, once with a 21-yard run and once with a 5-yard run to set up first down at the East Wilkes 9-yard line. Rash scored from there—matching a career high with his fourth touchdown—and added the 2-point conversion to cut the lead to five points with 2:45 remaining.

West Wilkes got the ball back at its 15 with 14 seconds to play, but time ran out.

The Blackhawks had 382 total yards, their second-highest total of the season.

“We fought the whole time,” said Todd Rutz, in his first season as the West Wilkes coach. “They obviously scored on some big plays, and we didn’t play terribly defensively. We just gave up the big play when we didn’t need to give up the big play.

“It would have been easy to throw in the towel, but we didn’t, and I’m very proud of the way we played tonight.

Rutz added, “I keep telling them that we can’t get used to losing and we keep looking for the positive…. We need to get on the ‘W’ side.”

West Wilkes had a nearly 14-minute advantage in time of possession, but took advantage of a short field for its game-opening score. Jarvis converted fourth-and-eight with a 14-yard pass to Shane Pellicano, and Seth Culler’s 4-yard touchdown run gave the Blackhawks a 6-0 lead.

A possession later, Garrett Patrick fumbled and the Cardinals’ Kole Lambert recovered at the East Wilkes 24.

Howell threw to Vernon for 22 yards for a first down at the West Wilkes 38, and three plays later Vernon ran down a deep ball, making an over-the-shoulder catch on a 36-yard touchdown pass to give the Cardinals a 7-6 lead.

The Blackhawks went up 14-7 on Rash’s 12-yard scoring run, but Howell and Vernon connected again. Howell threw a deep out to Vernon, who sidestepped Jarvis at the sideline and cut upfield on a 67-yard scoring play that tied the game a second time.

Vernon had 126 yards rushing and 172 yards receiving. Both are career highs.

Trey Lambert tipped, then intercepted a Jarvis pass to give the Cardinals possession at their 26. Howell scrambled left and threw to Vernon for 47 yards on the first play.

Church carried on three of the next four plays, including a 1-yard run out of the Wildcat for a 21-14 lead at halftime.

Church added his second touchdown on the first possession of the second half for a 28-14 lead, but Rash’s 9-yard touchdown run cut it to 28-20.

“When we had our card sales (fundraiser), Coach Wilmoth was like, ‘Hey, if you sell this amount of cards, I promise we will get you black uniforms and blacked-out helmets,’” Howell said. “I think we’ve got the smoothest jerseys in the conference, and it’s good to know we can play in them and win in them at the same time.”

After being shut out against Forbush three games ago, East Wilkes has averaged 460 yards and 39 points in its last three games. “I think we got better this week,” Vernon said. “We had a great week of practice, brought some energy.

“I think we’re getting the ship turned around. We’re going to be all right.”

Notes: Since the start of the 1970 season, West Wilkes is 231-306-2. The Blackhawks began their football program in 1956…. Vernon’s 317 all-purpose yards are the most by an East Wilkes player since Dalton Key had 316 in a win over North Wilkes in 2012…. Trey Lambert had two interceptions for the Cardinals…. John Shepherd recovered a fumble and Jarvis had an interception for the Blackhawks.

In JV action, West Wilkes got back on track with a 46-28 win over East Wilkes in Millers Creek on Thursday night.

The Blackhawks (4-1, 1-1) held a 22-6 halftime lead, but the Cardinals (2-2, 1-1) battled back thanks to a pair of Briggs Gentry touchdown passes — a 48-yard pass to Ethan Cass and a 19-yard strike to Titus Millers. A pair of conversion passes from Gentry cut the deficit to 30-22 after three quarters.

Gentry had a good game in defeat, throwing for three touchdowns and adding another on the ground. The freshman also had a pair of conversion runs.

Sorry, there are no recent results for popular articles.

Cloudy skies early, then partly cloudy in the afternoon. High 52F. Winds NE at 5 to 10 mph.

Cloudy with periods of rain. Low 38F. Winds light and variable. Chance of rain 80%. Rainfall near a quarter of an inch.