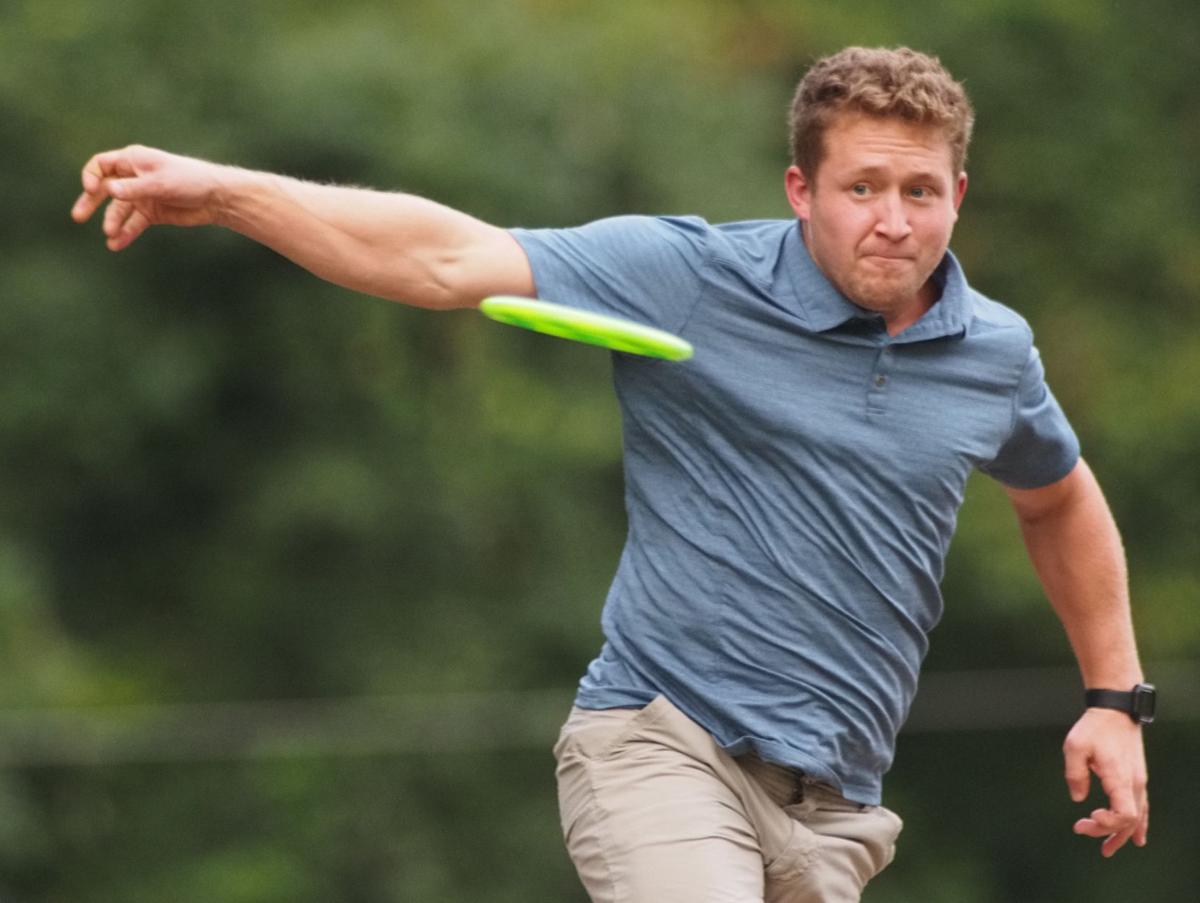 Kael Byrd, of Ferguson, throws a drive off the first tee at Rolling Pines Disc Golf Course in Wilkesboro during a practice round on Sept. 16. Byrd represented North Carolina this past weekend in the U.S. Amateur Match Play Championships in Emporia, Kan. 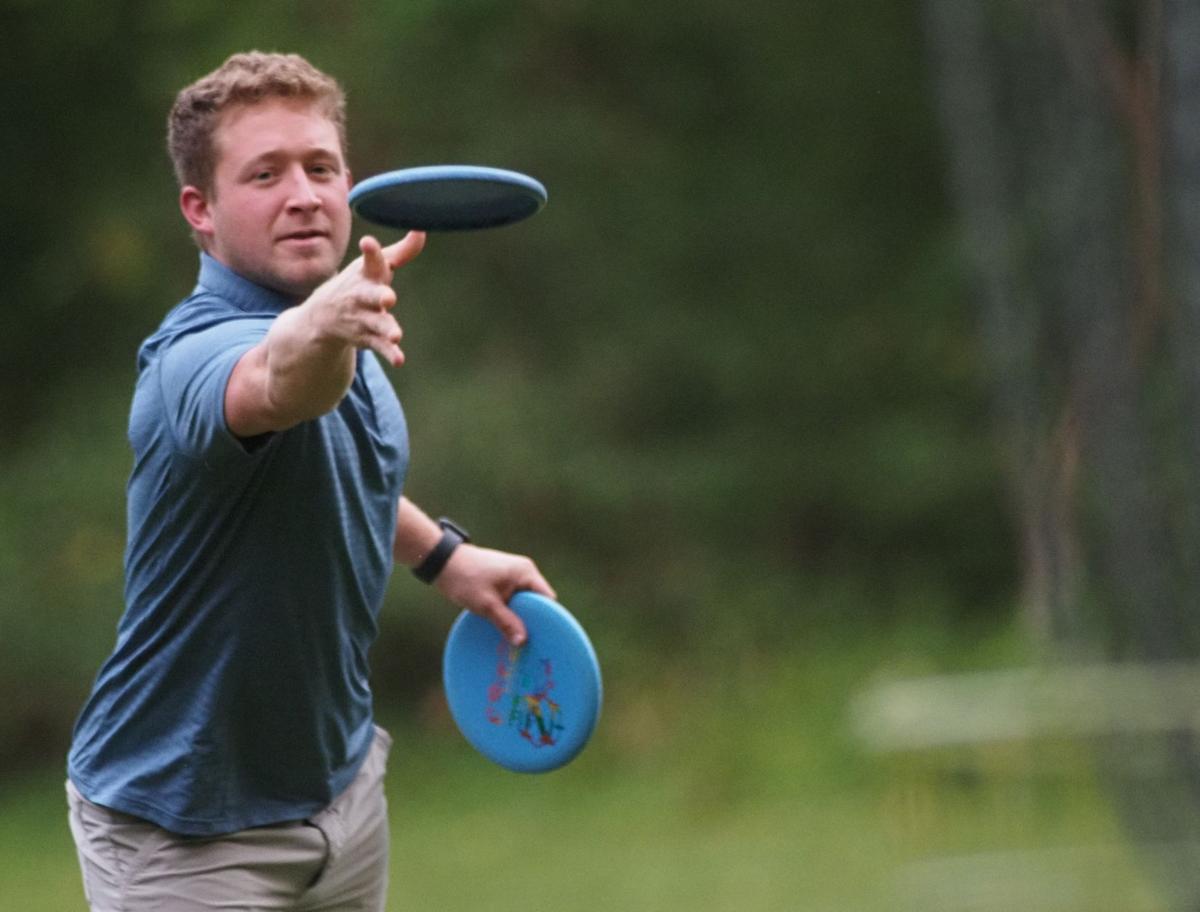 Kael Byrd, of Ferguson, aims for the chains as he releases a putt during a practice round at Rolling Pines Disc Golf Course in Wilkesboro on Sept. 16. Byrd finished fifth last weekend in the consolation bracket of a national match play tournament in Kansas.

Kael Byrd, of Ferguson, throws a drive off the first tee at Rolling Pines Disc Golf Course in Wilkesboro during a practice round on Sept. 16. Byrd represented North Carolina this past weekend in the U.S. Amateur Match Play Championships in Emporia, Kan.

Kael Byrd, of Ferguson, aims for the chains as he releases a putt during a practice round at Rolling Pines Disc Golf Course in Wilkesboro on Sept. 16. Byrd finished fifth last weekend in the consolation bracket of a national match play tournament in Kansas.

Representing North Carolina, Byrd was one of only 36 disc golfers in the United States and Canada to qualify for USAMP. Across 45 states and provinces, there were 170 local qualifying brackets that led to the finals.

“All in all, everybody I met was super nice and welcoming,” said Byrd in an interview Monday. “I really, really enjoyed meeting all the people at Dynamic Discs,” the disc golf manufacturer that co-presented USAMP.

“I let myself down, but I had fun for sure. It’s definitely something I want to do again. The courses were great and the prizes were great. It was my biggest tournament and something I’ll never forget.”

Byrd received $250 cash and $500 in Dynamic Discs store credit upon arriving in Emporia. He earned an additional $125 for finishing fifth in the consolation bracket, despite being matched up against higher-rated players every time.

In his opening round championship bracket match on Friday, Byrd fell to Virginia’s Daniel McDonald on the Jones East course.

“I played well and should have had him,” recalled Byrd. “He went up a couple of holes, but then threw OB (out of bounds) and I was only one back on the last hole.”

Needing to win the last hole to force a playoff, Byrd said he turned over his drive off the tee and was forced to try and make a long approach that landed beyond the basket, allowing McDonald to take the win “1-up.”

McDonald went on to win a bonus B-tiered singles tournament on Saturday in Emporia, an event affiliated with the match play championships.

That first-round loss bumped Byrd into the consolation bracket of the double-elimination competition. Later on Friday afternoon, Byrd faced Manuel Spicer of Ohio.

In this match, Byrd said, “everything was on, and I was making birdies left and right.” The contest ended with Byrd up by seven after 11 holes, an insurmountable lead.

Byrd battled his next opponent, Wesley Shaffer of Oklahoma, at midday on Saturday. In another closely-contested match that saw several lead changes, the disc golfers were tied going into the final hole at Jones West.

After his drive hit a tree in the fairway and dropped short of the ideal landing zone, Byrd said he was forced to “go for it” and clear a pond on his next throw, but the disc landed in the water and Shaffer took the win, “1-up.”

“I played really good, but it was some tough competition,” said Byrd. “The biggest challenge was the wind—it was constantly changing directions and blowing hard all the time. It was tough to judge which disc to throw.”

Byrd thanked his family and friends for their encouragement during the trip, which was the farthest he’d ever traveled from home. “I also want to thank my disc golf family, including the Wilkes County Disc Golf Club, for supporting me.”

Zetta received 18 Dynamic Discs Veteran baskets and tee signs for an 18-hole disc golf course and $6,000 in discs and apparel at the Dynamic Discs retail store.

Emporia, with a population of about 25,000, has five 18-hole and three nine-hole disc golf courses in its city limits. The city bills itself as the “disc golf capital of the world.”

In match play competition, scores do not determine the winner of the contest. The player who wins (scores lowest on) the most holes outright is crowned the victor. Ties on holes don’t factor into the scorekeeping.

The road to EmporiaByrd earned his spot in Emporia by winning the state USAMP title in Hickory at Glen C. Hilton Park on Sept. 3. He defeated Johnny McGee of Candler, winner of the Asheville qualifier, “1-up,” which means Byrd won one more hole outright than McGee.

Byrd sealed the win in Hickory by besting Jeremy Jenkins, the top Zebulon qualifier, “4 and 3,” which means play was ended with three holes left because Byrd had a four-hole lead over Jenkins.

Byrd won the local qualifier in Wilkesboro at Rolling Pines Disc Golf Course, defeating three different disc golfers over the course of a week in late May and early June.

A 2012 graduate of Wilkes Central High School, Byrd works at Edmisten Heating & Cooling. His mother, Genesa Holloway Byrd, accompanied him on the trip and even caddied for him on the courses.

“She tried to pick up some knowledge of disc golf, and now she wants to play,” said Kael. “It was fun trying to teach her and share that tournament experience with her.”

Byrd has a current player rating of 934 and had two Professional Disc Golf Association-sanctioned wins in 2019: on Jan. 19 and Dec. 14, both at The Bear in Hickory, competing in the intermediate division.

Periods of rain. Potential for heavy rainfall. Low around 60F. Winds light and variable. Chance of rain 100%. Rainfall near an inch.

A shower or two around the area in the evening, then partly cloudy overnight. Low 38F. Winds light and variable. Chance of rain 30%.

A few clouds from time to time. Low 38F. Winds light and variable.