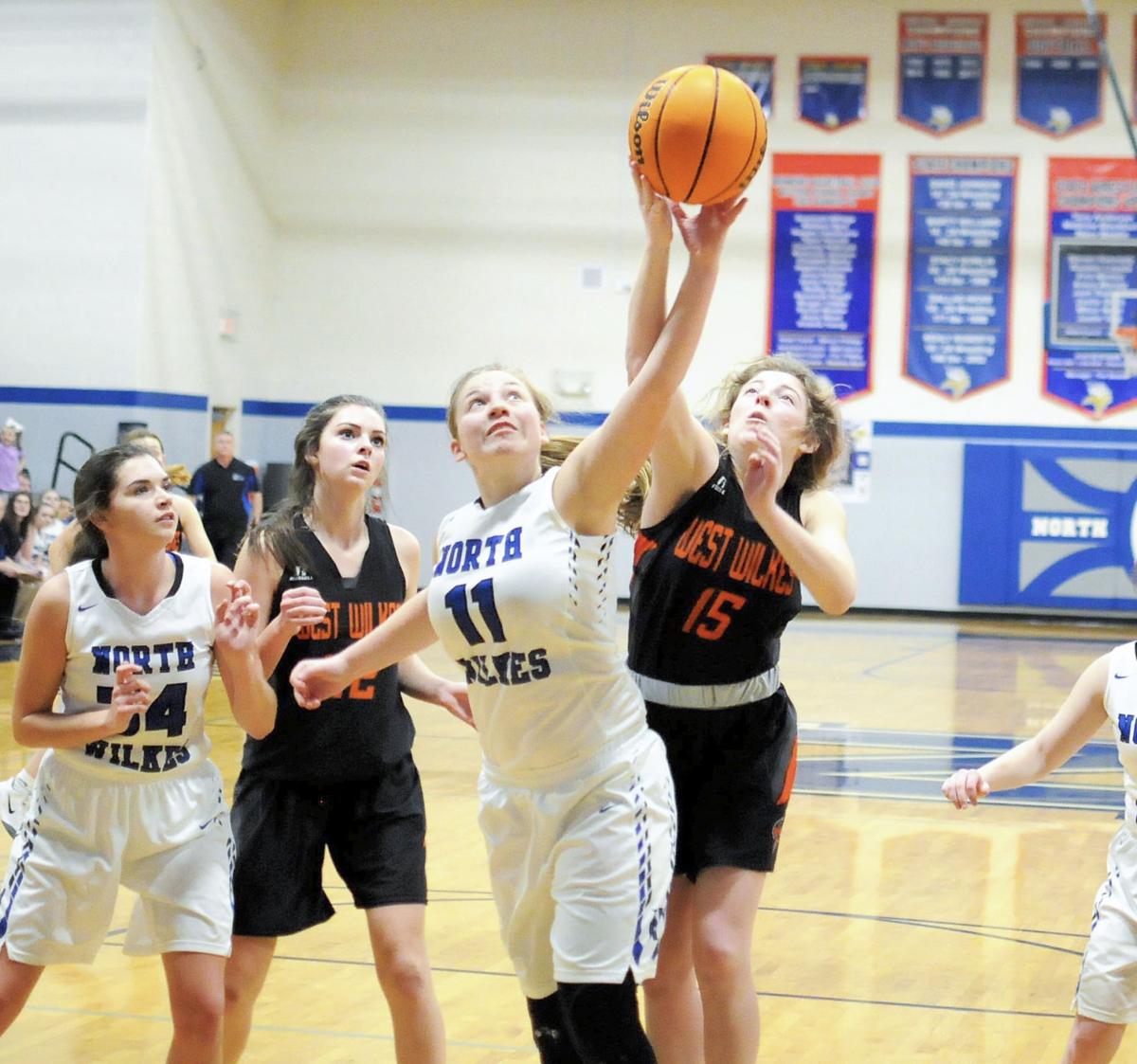 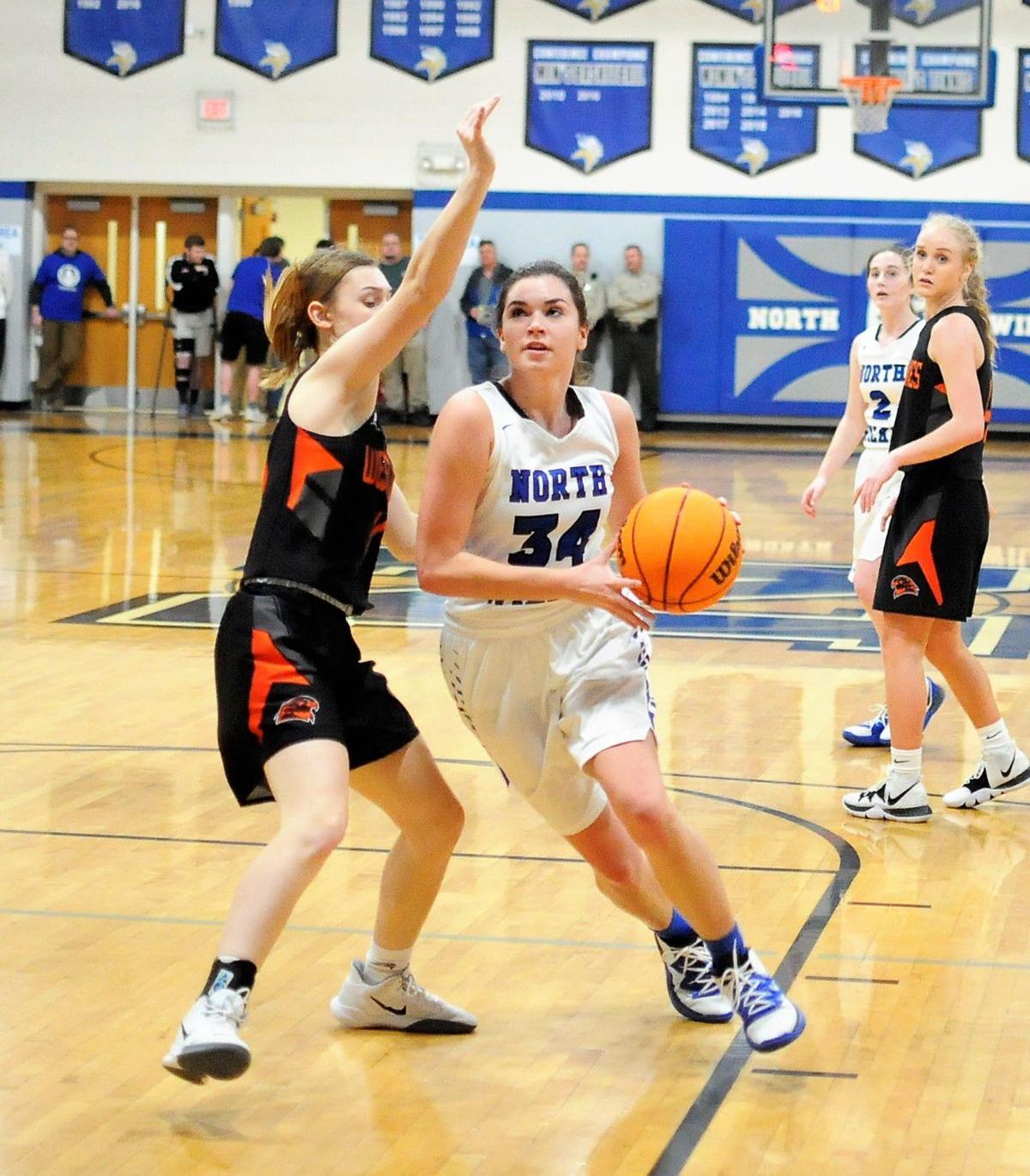 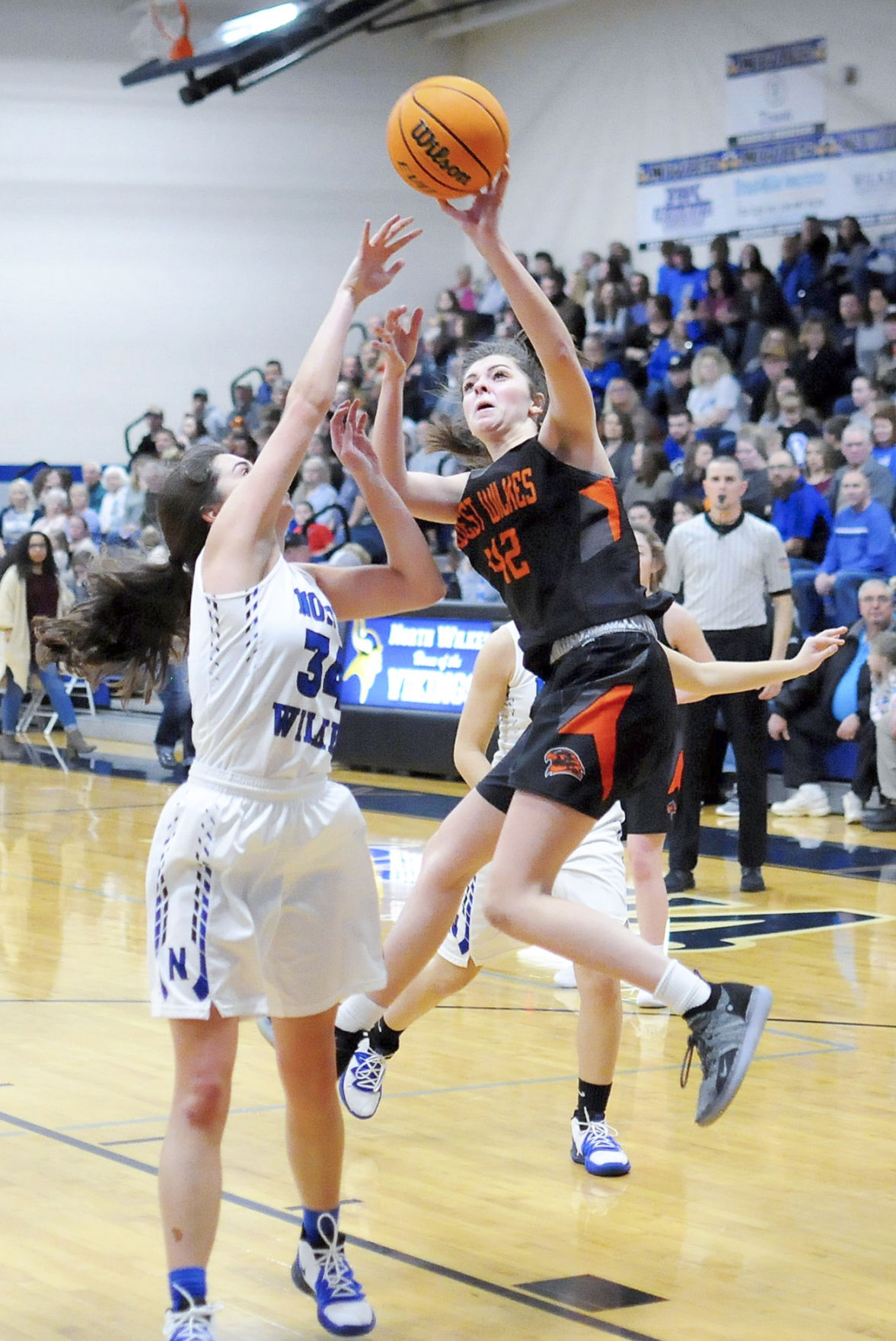 Sometimes one play can make a big difference.

Such a play happened right before the halftime buzzer Friday night in Hays, a momentum-changer that set the tone for the second half.

The end result was a hard-fought 43-26 West Wilkes victory over county rival North Wilkes in Mountain Valley Athletic Conference action, thanks in part to a pivotal play that came courtesy of West’s star wing Jamilyn Wilcox.

With her team trailing in the second quarter’s waning seconds, Wilcox sank a running 3-pointer from just inside the half-court line. The ball swished through the hoop as time expired, putting the visitors up 16-14 at the break.

West Wilkes would not relinquish that advantage. Instead, the Hawks started the second half on a 9-1 run, started by two free throws by Wilcox and capped by a tough transient layup from Kendall Stanley at the 5:19 mark of the third period that made it 25-15.

“It was a huge boost for us at halftime,” said West Wilkes Coach Allie Greene, whose team improved to 11-2 overall and 4-1 in the MVAC. “We had struggled to score throughout the second quarter. And that shot was a big momentum swing; once we took the lead, we hit a good run in the third and never looked back.”

“Our defense had been really good right up until that point,” said North Wilkes Head Coach Steven Phillips. “And our defense wasn’t as good in the second. Of course, credit goes to West, because they also hit some really tough shots in the third. But, yes, that was a big shot, no doubt. We had the momentum in the second quarter, and that shot changed things.”

The Vikings, already playing without the services of starting wing Liz Martin (out with an injury), lost another starter, McKenzie Johnson, in the second half. Johnson twisted her ankle before the break and tried to make a return in the second half but was ultimately unable to.

“We had a decent flow offensively early on,” said Phillips. “And we didn’t in the second half. Credit goes to West Wilkes. Their defense is really good, and even though we kept battling we had trouble scoring in the second half.”

West Wilkes carried a 12-point lead into the final frame, but the Vikings cut that margin to nine, at 35-26, after a layup from the left by Shelby Roal with just over five minutes left to play.

But what followed was a span of well over two minutes of game time where the Blackhawks milked the clock, keeping the ball away from the scrambling Vikings’ defense.

“That wasn’t our intent,” admitted Greene afterwards. “We just told the kids to be patient and wait for the best shot. We wanted to wait for an opportunity near the basket. And we showed a lot of poise in that span. We didn’t rush anything and we forced them to have to foul.”

West Wilkes was good enough from the charity stripe (9-of-19 in the fourth) to hold on (all of the ’Hawks’ fourth quarter points came at the line). And perhaps more importantly the Blackhawks didn’t allow North any clean late looks, as Roal’s basket was the last points the home team would score.

Carson Ledford led the ’Hawks in scoring with 19 points, and Wilcox added 13. That dynamic duo tallied over 75% of West’s total points Friday.

Makayla Cornelius scored six points to pace the Vikings and Johnson added five in limited playing time as the home team fell to 9-6 and 1-4 in league play.

“Haili really grew up in the second half,” said Phillips. “She played a little tight in the first half, but had a great second half, especially defensively. We were very proud of her.”

The Blackhawks return to action (after taking the start of this week off due to county exams) Wednesday in Sparta against Alleghany. The Trojans, who played Monday on the road at Ashe County, is undefeated this season, and sit in a three-way tie atop the MVAC standings (with the Huskies and Wilkes Central). The varsity girls game will start at 5:30 in the main gym on the campus of Alleghany High School.

Next up for the Vikings is a home contest Wednesday against Starmount. Both teams are tied for fifth in the league standings with Elkin.

North Wilkes did prevail in the JV game Friday, besting the Blackhawks 32-26. The Vikings built an 11-point advantage at the intermission and held on late to earn the win. North’s Beth Settle led all scorers with 13 points Friday and Kate Brown added eight. West Wilkes was paced by nine points from Lexie Huffman.