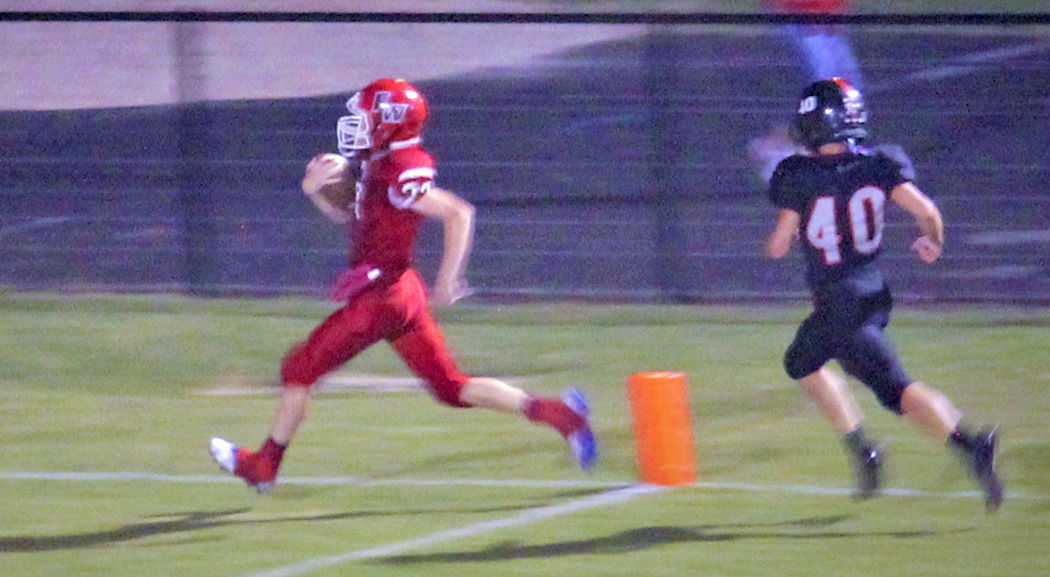 BAILEY GRUBB, of East Wilkes had a game-winning pick-six in last Saturday’s 12-6 victory. In pursuit of Grubb is Holt Haunchey, of West Wilkes. Haunchey rushed for a game-high 171 yards. 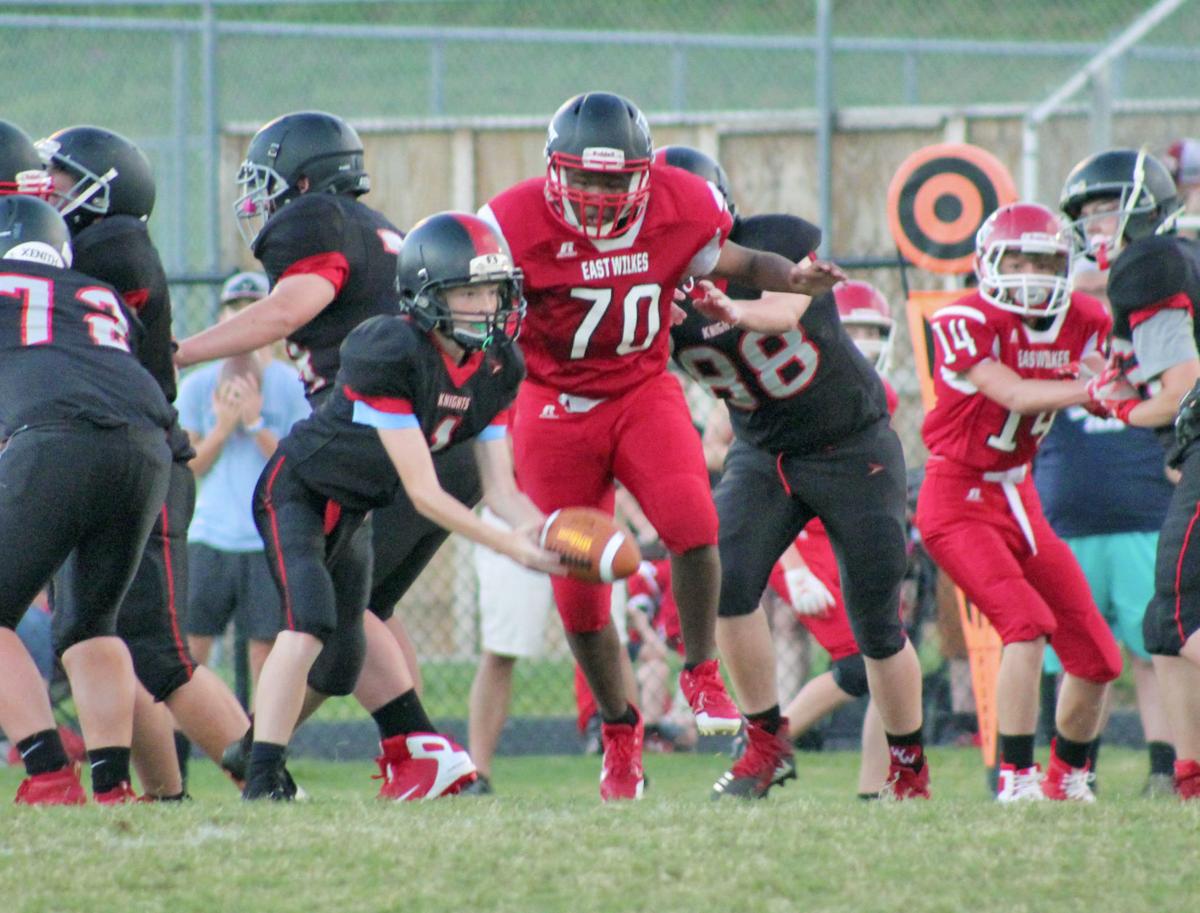 BAILEY GRUBB, of East Wilkes had a game-winning pick-six in last Saturday’s 12-6 victory. In pursuit of Grubb is Holt Haunchey, of West Wilkes. Haunchey rushed for a game-high 171 yards.

West Wilkes Head Coach Randy McCoy set the stage for last-second heroics in Saturday evening’s Blue Ridge Youth Football League contest between his Knights and East Wilkes when he called a timeout with three seconds remaining and the score tied at six.

McCoy intended to take one last shot at ending this game in regulation before going into overtime if his gamble failed.

The Knights were riding the momentum of a timely fumble recovery (the last of six) which ended a Scorpions’ drive on the West Wilkes 27-yard line with less than three minutes to play.

The Knights had advanced the football to their own 42-yard line in five plays. Facing a fourth down and seven, with about 30 seconds left to play, McCoy let the clock run down to three seconds before he called timeout.

West’s Ethan Day hoisted a “hail mary” down the left sideline in the general direction of Knight receivers Jakaden Larrimore and Diego Chavez.

Bailey Grubb, the Scorpions’ free safety, then stole the show intercepting Day’s pass and racing down the Knights sideline to score the game-winning touchdown for the Scorpions (1-1) as time expired and a 12-6 victory.

“I am not saying that we are going to win a championship, but defense is what wins championships,” said East Wilkes Middle School Head Coach Travis Walker. “We gave up six fumbles and put our defense in bad spots all night. They bent at times but didn’t really break and we were able to win because they made plays.”

In nine possessions, West Wilkes ran 41 plays that produced 182 yards of total offense. The Knights had nine first downs, two turnovers (a fumble and an interception) and two unsuccessful trips to the red zone.

“Mistakes and untimely penalties really cost us,” said McCoy. “Statistically, in all the categories other than the score, I am sure we were dominant.”

In eight possessions, East Wilkes ran 23 plays (only five in the first half) that generated 156 yards of total offense.  The Scorpions had six first downs and surrendered six fumbles.

The first half was offensively dominated by the Knights as the Scorpions had difficulty hanging onto the football. Despite making two trips deep into East Wilkes territory, West was unable to score as the two teams remained tied at halftime.

On the opening of their first possession of the second half, Haunchey appeared to have scored a 55-yard touchdown for the Knights, but the score was negated by a West Wilkes penalty.

“(Haunchey ) ran really hard tonight” said McCoy. “He is a special player and a joy to coach.”

The Knights advanced the pigskin to the Scorpions 14-yardline, but the possession ultimately stalled on East’s 21-yardline where West turned the ball over on downs.

East made the most of their second possession of the second half.  A five-play drive was capped with Royal’s 11-yard touchdown run to establish a 6-0 lead.

The Scorpions appeared to take a 12-point lead on their next possession as Grubb rushed for a 43-yard touchdown.  The score was nullified by a holding penalty and the drive ended on the next play with a fumble.

The Knights (1-1) came back strong on their fourth possession of the half following  an East Wilkes fumble that gave them the ball at the Scorpions’ 39-yard line.

Haunchey scampered for 39-yard touchdown to tie the score. The conversion attempt failed as the two teams entered the fourth quarter tied at six.

In the waning minutes of the quarter East appeared to be mounting a serious drive before it coughed up its sixth fumble of the night on the Knight 39-yardline, which West ended up recovering on their 27-yard line to set up the final sequence.

“We are going to enjoy the win tonight and tomorrow” Walker continued. “But on Monday, on both sides of the ball, we have a lot to work on.”

The Scorpions will have plenty of time to work on things, as they’ll be off this week before returning to action on Sept. 21 against Ashe County. The Knights will look to get back above .500 when they travel to Ashe County on Saturday to face the Bulldogs.

A mix of clouds and sun early, then becoming cloudy later in the day. High 49F. Winds light and variable.

Cloudy with showers. Low near 45F. Winds light and variable. Chance of rain 40%.

When you’re looking for something fun to do each week, check our curated guide to what’s going on in Wilkes County and the area from Jan. 28-Feb. 1.