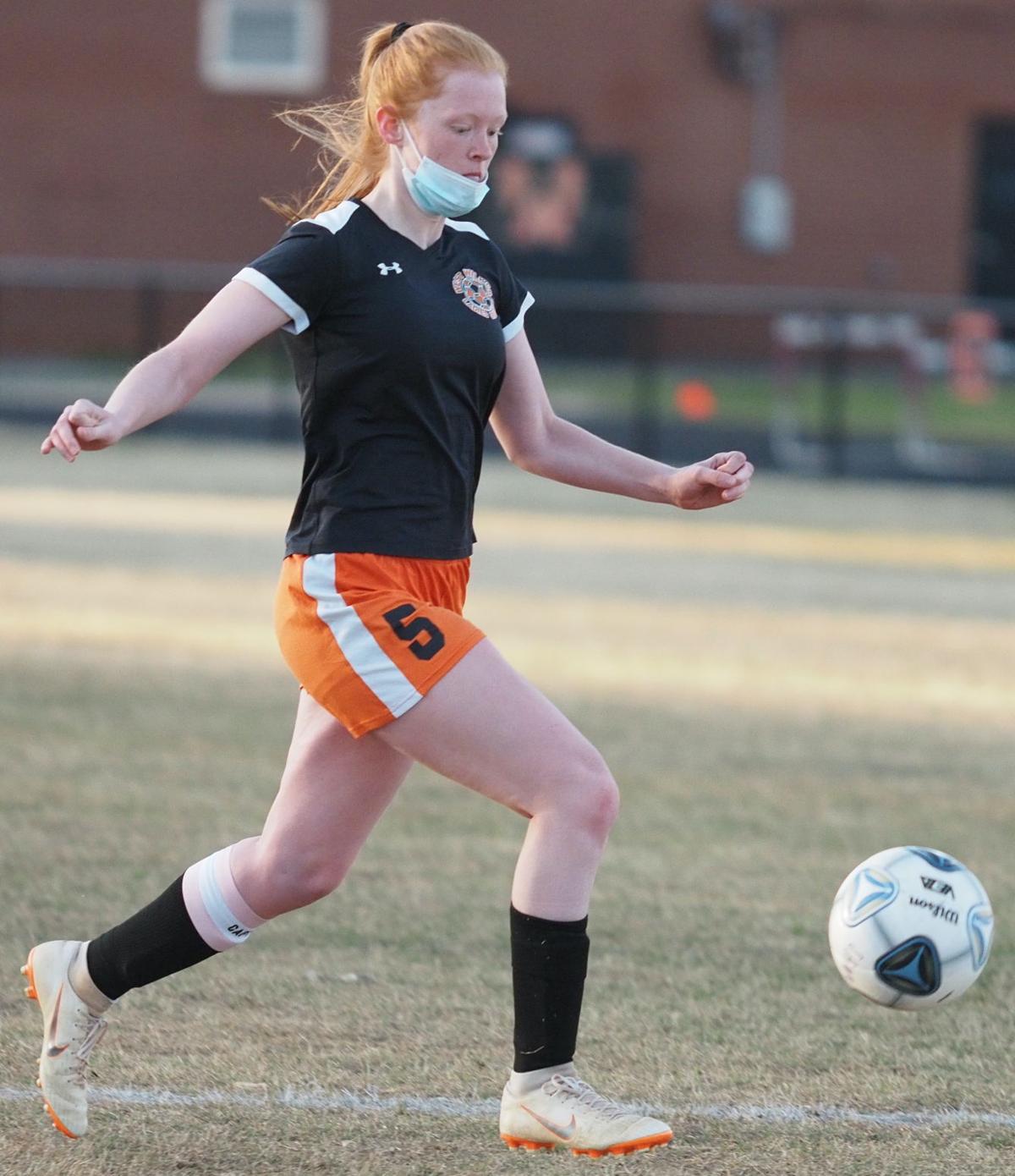 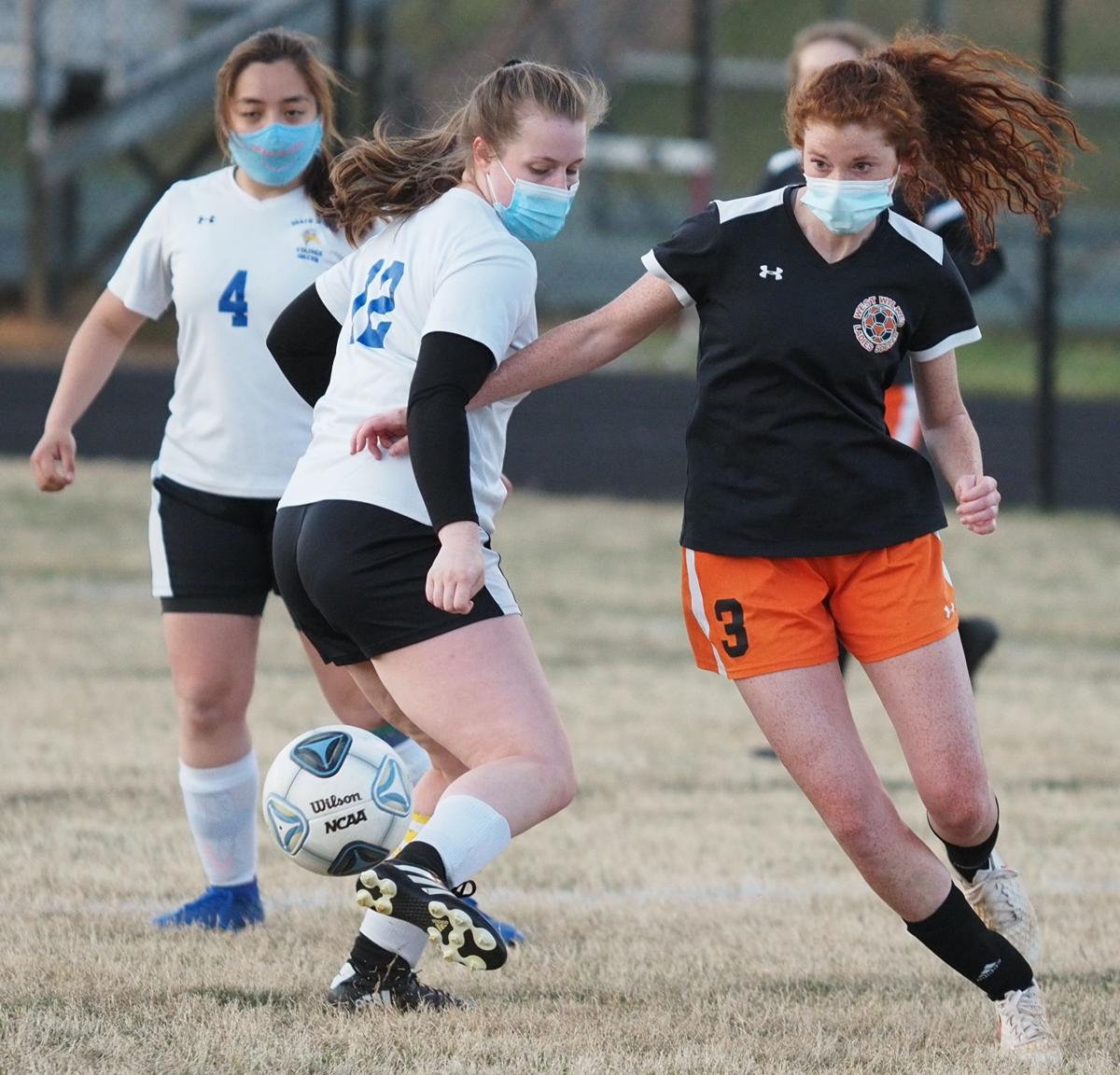 Above left: West Wilkes senior Gracie Lambert passes the ball Thursday as North’s Reagan Jenkins (12) and Lucy Albanil-Rangel (4) defend on the play. Lambert had an assist in West’s 4-0 win in Millers Creek. Above right: The glasses of West Wilkes senior co-captain Abby Waddell go flying after being struck by a free ball Thursday in Millers Creek. Waddell was able to retrieve the glasses and continue play moments later. 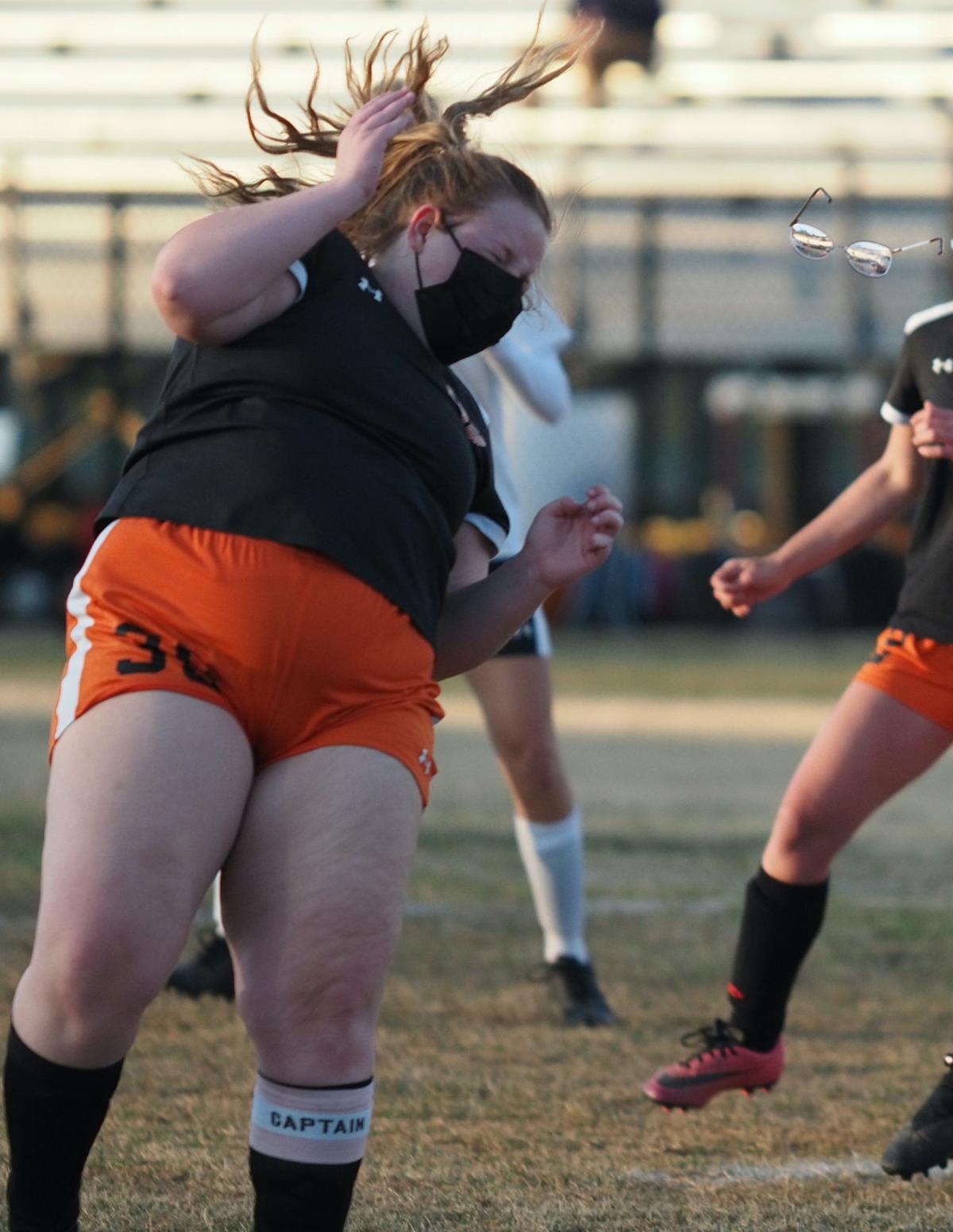 The glasses of West Wilkes senior co-captain Abby Waddell go flying after being struck by a free ball Thursday in Millers Creek. Waddell was able to retrieve the glasses and continue play moments later.

Above left: West Wilkes senior Gracie Lambert passes the ball Thursday as North’s Reagan Jenkins (12) and Lucy Albanil-Rangel (4) defend on the play. Lambert had an assist in West’s 4-0 win in Millers Creek. Above right: The glasses of West Wilkes senior co-captain Abby Waddell go flying after being struck by a free ball Thursday in Millers Creek. Waddell was able to retrieve the glasses and continue play moments later.

The glasses of West Wilkes senior co-captain Abby Waddell go flying after being struck by a free ball Thursday in Millers Creek. Waddell was able to retrieve the glasses and continue play moments later.

On senior night, the West Wilkes soccer team got scoring punches from its underclassmen—including a hat trick from junior Brooke Greene—in a 4-0 shutout of North Wilkes on Thursday.

Greene found the back of the net twice in the first half, helped by assists from sophomores Ivy Bledsoe and Emma Golds. West led 2-0 at the break.

Greene, the team’s leading scorer this year, completed the hat trick from the middle of the pitch, about 10 yards out, with 34:18 left in the game. Lambert assisted on the play, catching Greene in stride with a well-placed cross from midfield.

Bledsoe completed the scoring with 17:25 remaining in the contest. She found the net on a rebound off a Greene corner kick.

Morgan Wood, West’s sophomore goalie, preserved her third shutout of the season with a nice scrambling save in front of the goal with 14:23 left to play. She also had a shared shutout after a 0-0 tie with Elkin on March 17.

Wilkes Central picked up a 4-2 nonconference win Monday over Mount Tabor at the River’s Edge soccer complex in Wilkesboro.

Freshman Anna Rollins scored two goals for the Eagles (12-0 overall), who led 2-0 at halftime. Juniors Sarah Lowe and Zoe Susi had single goals for the victors.

Notching assists for Central were Susi and sisters Makenna and Addisen Freeman.

The goals by Mary Claire Bevis and Sophie Kemp were the first allowed all season by the Eagles. Central has scored 122 goals.

The Spartans, members of the Piedmont Triad 3A Conference, dropped to 3-5-1 overall this season. They are 3-1 in league play.

Wilkes Central dropped 15 goals from seven different players in a shutout of Starmount in Moravian Falls on Thursday. It was also the Eagles’ 15th-straight victory.

“We were able to see athletes from across the age spectrum find the back of the net,” noted Matt Matthews, the Eagle coach. “Starmount brought a very physical game that at times got a bit chippy, but our girls managed the physical pressure well, and as coaches we saw them adapt to our style of soccer quickly.”

In a match that was ended after 40 minutes of play, Zoe Susi erupted for four goals and assisted on two others. The team’s other junior all-state player, Makenna Freeman, struck for three goals and added three assists.

Freshman Anna Rollins also found the back of the net three times. She assisted on another goal. Sophomore Lydia Mayes scored twice and junior Sarah Lowe had a pair of assists.

“Our goal scoring opportunities came early and often as we were able to distribute the ball very well,” added Matthews. “This may have been our best display of passing year to date. The passes were concise, but the thing that makes the biggest difference is our runs off of the ball were even better. This creates so many opportunities for our girls.”

Alleghany posted a 3-1 win over East Wilkes in Ronda on Thursday.

The Trojans improved to 3-8 while the Cardinals slipped to 1-8.

“We came out to play early against a tough, physical opponent in the Trojans,” said Central Coach Matt Matthews. “The physical nature of the game and the defensive strategy of the Trojans was something we had to adjust to, and I am proud of our ladies for making those on-field adjustments.”

Junior Zoe Susi had two goals and three assists for the 10-0 Eagles, who have scored 103 and not given up a goal this season. Junior Makenna Freeman also had a pair of goals.

Addisen Freeman had a goal and two assists while Ryleigh Parker also assisted on two scores. Sarah Lowe had the other goal for the Eagles.

“Our vision and game sense is improving weekly,” noted Matthews. “We are heading towards a peak at just the right time in the season. We had five players who were involved directly with assists in the game. This is a great indicator of strong ball movement and excellent finishing opportunities by another five players.

“Balance is key to strong attack and a solid defense. Our midfield is doing a great job of providing balance on both ends of the field.”

The Spartans slipped to 2-8 in the MVAC.

West Wilkes slipped by Starmount, 3-1, in Boonville on April 20.

Junior Brooke Greene netted two goals for the Blackhawks, while sophomore Emma Golds connected on the other. Assisting on the scores were senior Gracie Lambert, sophomore Ivy Bledsoe and junior Jocelyn Persades.

Meyli Carrasco scored the Rams’ goal, assisted by Irene Villanueva-Adame. Emily Parker had eight saves in goal for the hosts (4-7).

Ashe County posted a 4-0 shutout of East Wilkes in Ronda on April 20.

Morgan Phipps, Jordan Jones, Jezik Martin and Claudia Acevedo scored goals for the Huskies, who bettered to 9-2 in the MVAC. Goalie Sophia Kiser made seven saves.

The Cardinals fell to 1-7 after playing their first match since 10 days of COVID-19 quarantining.

Elkin’s Victoria Jolly and Itzel Bello scored goals in the first half, followed by Maggie Orta’s connection after the break.

The Buckin’ Elks improved to 7-3-1 while the Vikings remained winless after 10 games.

Partly cloudy skies early will give way to occasional showers later during the night. Low 62F. Winds SW at 10 to 20 mph. Chance of rain 40%.

A few clouds from time to time. Low 44F. Winds light and variable.

Cloudy with showers. Low around 45F. Winds light and variable. Chance of rain 40%.