Wilkes Central freshman Peyton Gage sets the pace en route to a winning time of 24:01 in the pre-conference meet in Millers Creek on Nov. 17. 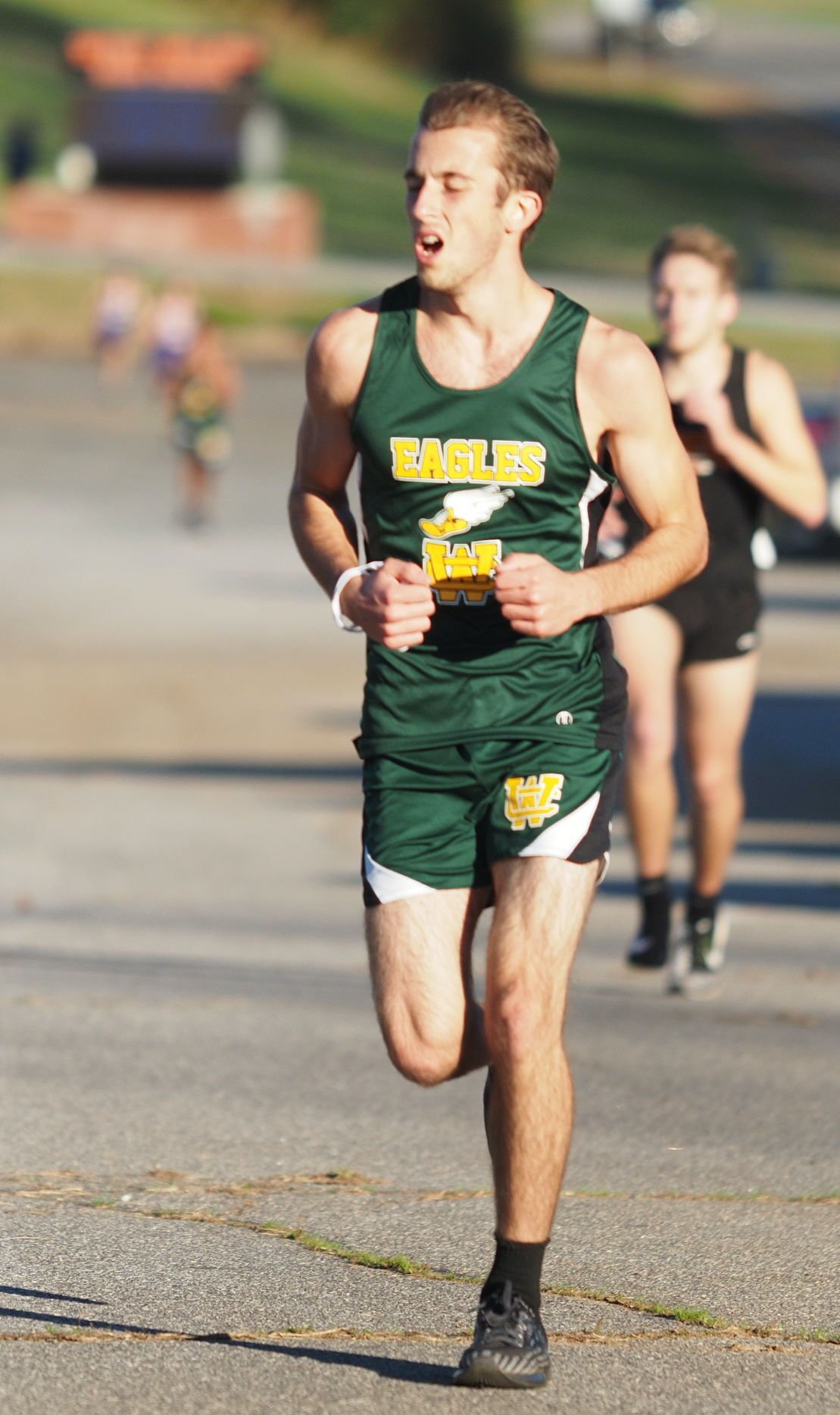 West Wilkes’ Austin Triplette is still running shortly after losing a shoe in the school’s student parking lot. Triplette was forced to soon pull out of the MVAC pre-conference race on Nov. 17.

Wilkes Central freshman Peyton Gage sets the pace en route to a winning time of 24:01 in the pre-conference meet in Millers Creek on Nov. 17.

West Wilkes’ Austin Triplette is still running shortly after losing a shoe in the school’s student parking lot. Triplette was forced to soon pull out of the MVAC pre-conference race on Nov. 17.

West’s Austin Triplette was keeping close pace behind Gage when he lost his right shoe as the course transitioned from grass to the student parking lot. Undaunted, he continued in second place for a stretch before dropping out of the race.

“Austin should have stopped and put (his shoe) on, in hindsight, but he didn’t want to lose sight of the WC kid (Gage),” explained West Coach Rhiannon Adams, who is Triplette’s mother.

Ashe came out on top in the team standings Nov. 17 with 30 points. Central was second with 41 points and West had 63 after Triplette’s misfortune. Alleghany did not field enough runners for a team score.

Peyton Gage, a freshman, was clocked at 24:01 and finished 46 seconds ahead of Ashe County’s Claudia Acevedo. Central’s Isabelle Curry (26:07) and Kaelyn Twiggs (26:19) were sixth and seventh, respectively.

“I am indeed proud of Jadon and Peyton,” said Eagle Coach Colby Shell. “Not every day you get a brother-sister combo on your team like that.”

Ashe placed two other girls in the top five en route to a team-leading 24 points. Central was second with 35 points and West Wilkes, with only two finishers (Katelyn Cothren and Kyley Brindle), didn’t qualify for a team score.

On Nov. 18 in Millers Creek, Annika Bell of East Wilkes won the girls race with a time of 23:06, the fastest girls result over the two-day pre-conference meet. The sophomore finished 43 seconds ahead of her closest competitor, Elkin’s Ava Bledsoe.

“I thought Annika paced herself really well,” said East Coach Will Jolly. “She was able to get off to a good start near the front and work her way into the lead throughout the race. I liked to see that she was at her own pace near the end and was able to create separation while in the lead.”

Braedon Foster of North placed first in the boys lineup on Nov. 18, clocking in at 19:33. The junior was 14 seconds quicker than the runner-up, Jack Zamudio of Elkin.

“I couldn’t be more proud of the team yesterday,” said North Coach Blake Johnston. “Braedon, Natalie, and Mitch (Adams, sixth, 22:25) had solid performances. Overall, each runner had a good day.”

He said it was good for the freshmen to get their first taste of high school competition. “They were excited and anxious at the same time to get the first meet and initial jitters out of the way. The youth of this team really impressed me on Wednesday.”

Johnston added that host West Wilkes “put on a well-run meet that went smoothly and timely. It was a good experience. Thanks to them.”

“I was overall very proud of all my runners yesterday,” said Jolly. “Four of my six had never ran in an XC meet before so it was good to see them have that experience. For those who are new to the sport, this gives them a time to focus on and improve throughout the remainder of the season.”

Elkin won both team standings by default on Nov. 18, being the only school to field at least five runners in each field.

Jolly added, “I reminded all of my runners that they will hopefully see this course once again in December (for the conference meet on Dec. 19) and I look forward to seeing how they can all improve next time around.”

Clear skies with a few passing clouds. Low 27F with temps rising to near freezing. Winds light and variable.