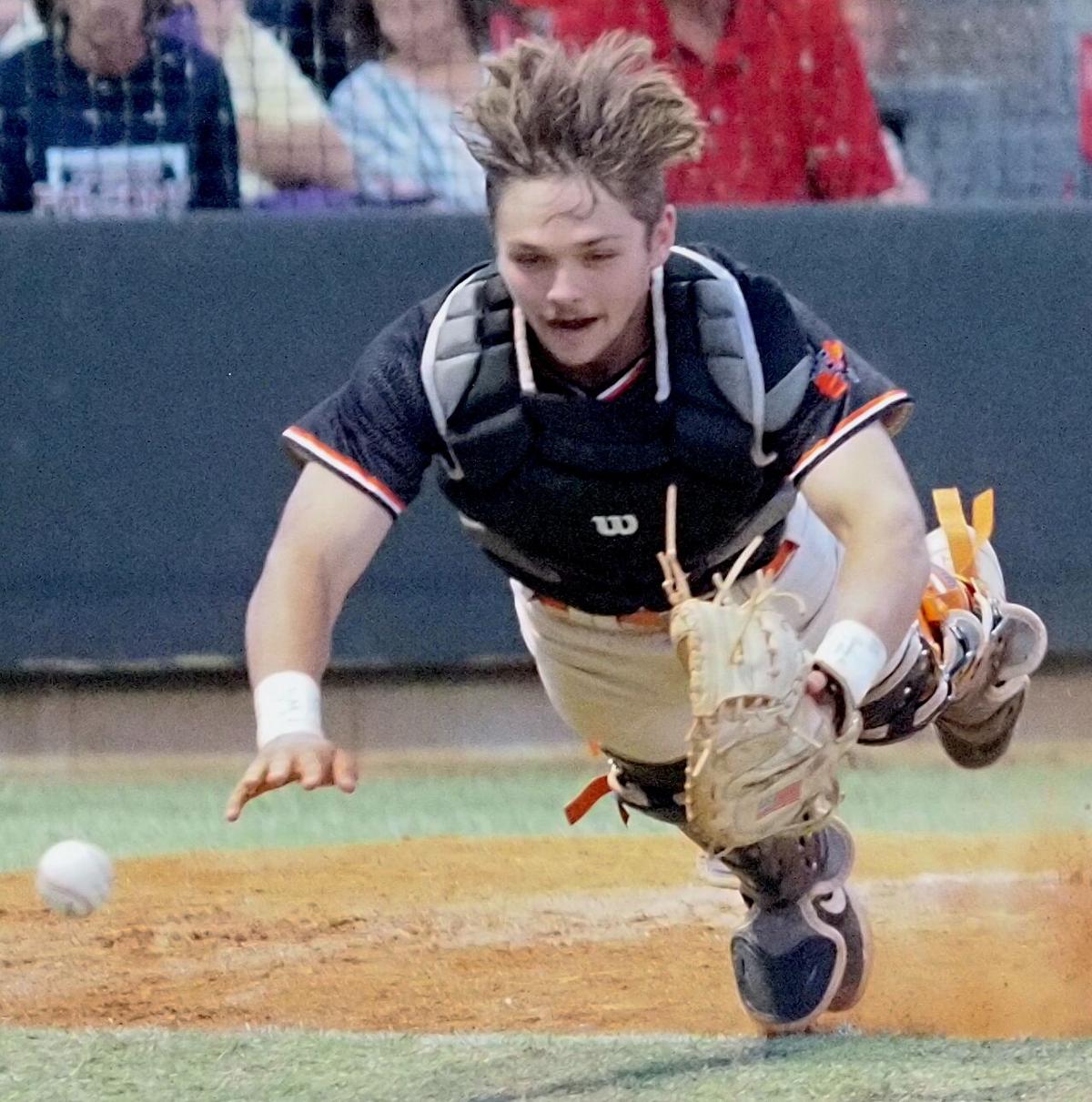 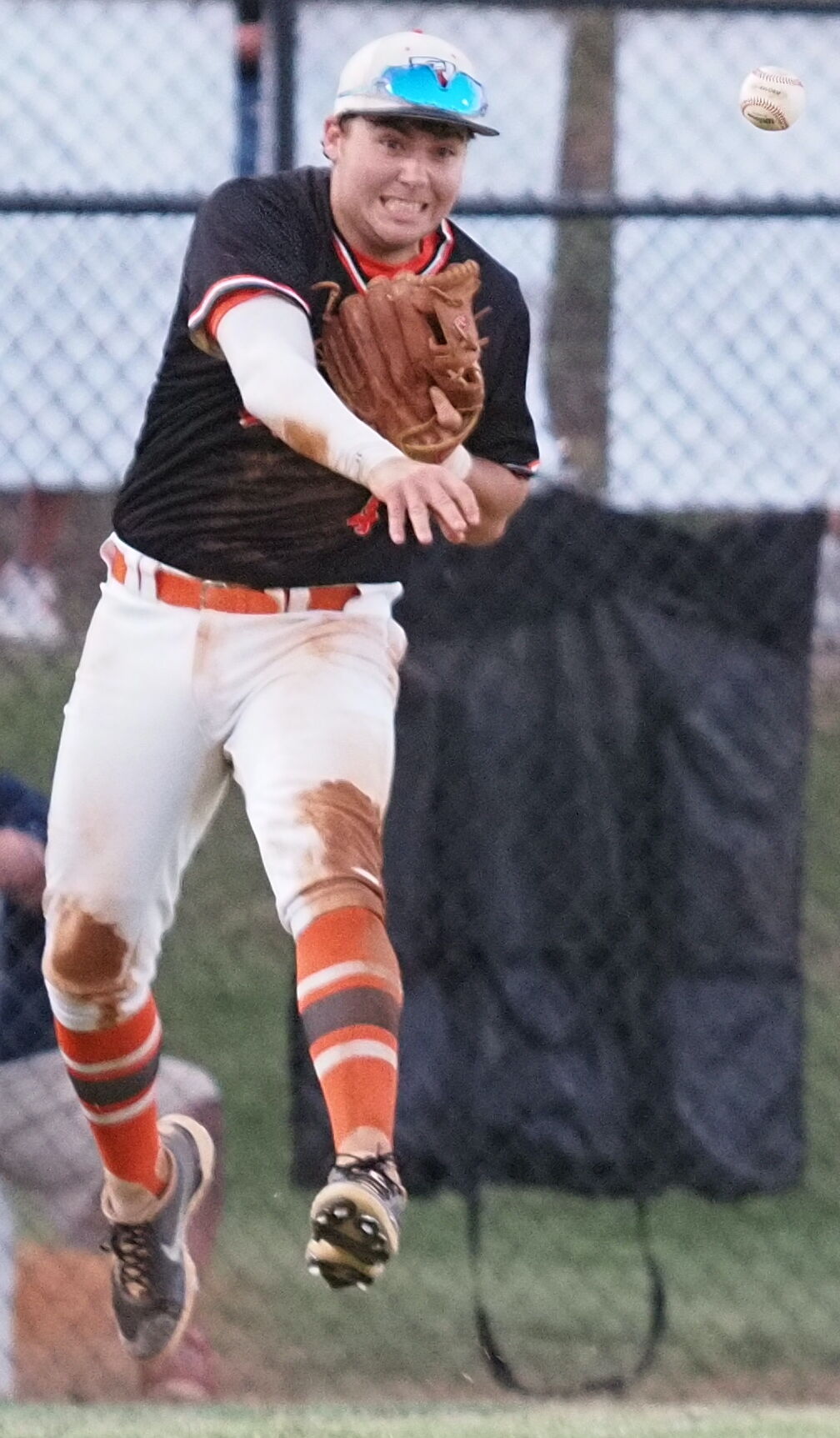 West Wilkes third baseman Evan Johnson makes a leaping throw to first base to record an out Thursday in Millers Creek. 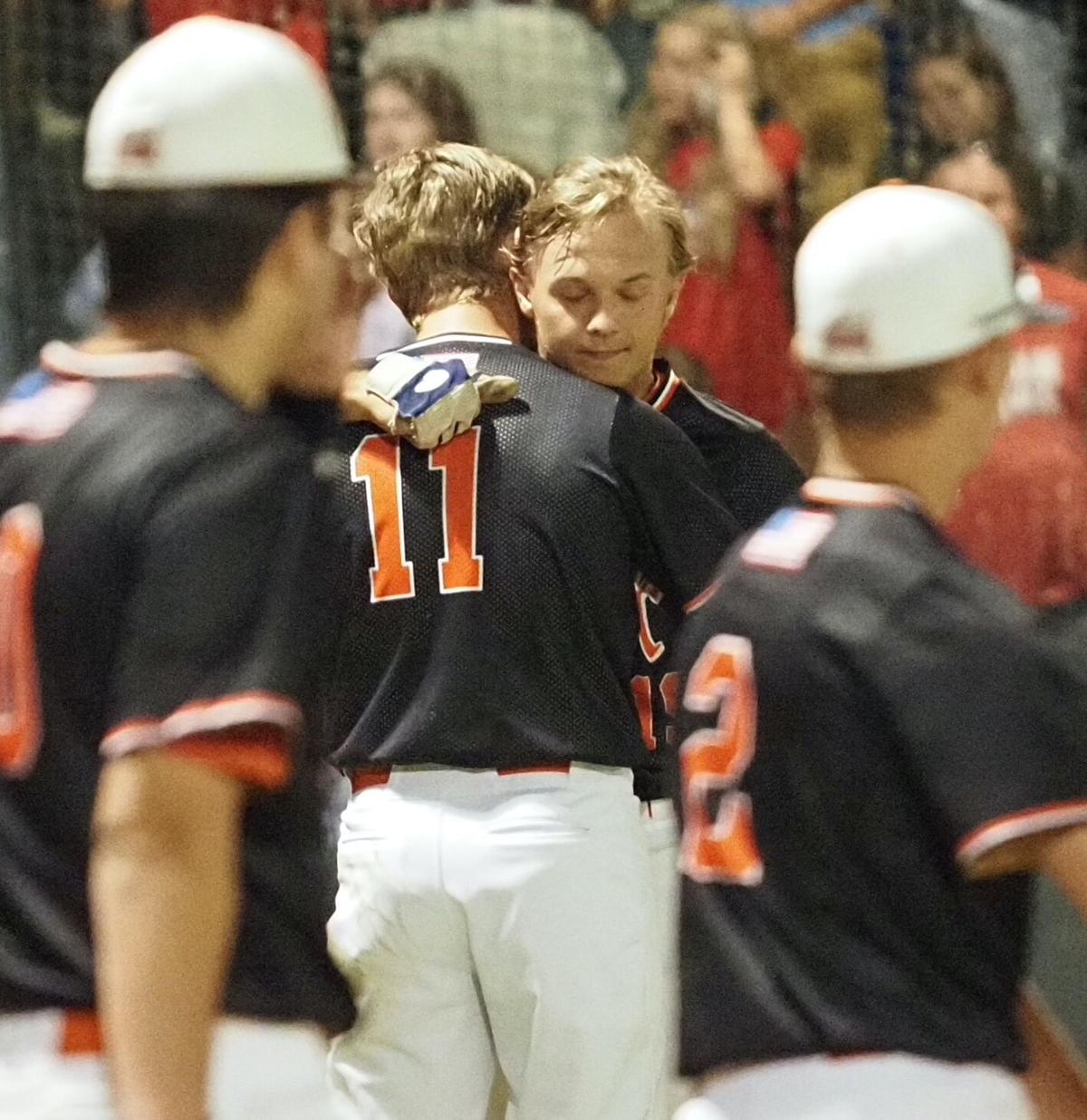 West Wilkes senior Izaac McGuire (11) consoles Riley Ledford after Forbush closed out a 7-4 victory over the Blackhawks in the quarterfinals of the 2A West Region state playoffs in Millers Creek.

West Wilkes third baseman Evan Johnson makes a leaping throw to first base to record an out Thursday in Millers Creek.

West Wilkes senior Izaac McGuire (11) consoles Riley Ledford after Forbush closed out a 7-4 victory over the Blackhawks in the quarterfinals of the 2A West Region state playoffs in Millers Creek.

To knock off a championship baseball team on their home turf is a tall order, especially in the state playoffs.

Forbush did it twice in two days after upsetting West Wilkes 7-4 in Millers Creek on Thursday evening in front of one of West's biggest hardball crowds in recent memory.

The upstart Falcons (11-5) scored four runs in the sixth to stun the 15-1 Blackhawks, quad-peat champions of the Mountain Valley 1A/2A Athletic Conference.

“I hated to see the season end for a great group,” said Drew Ward, West’s coach. “One inning—really all season—did us in and helped them score the runs they needed.”

In the Forbush sixth, Dawson Graham singled right up the middle with one out. Logan Beane then doubled to the fence in right center, putting two runners in scoring position against West starter Trenton Mastin.

The Falcons next laid down a bunt that was fielded by Mastin, but the senior’s throw to first was high and deep into right field, allowing both runners to score.

Forbush’s Peyton Wall followed with another bunt that Mastin gloved, but the throw home to senior catcher Braxton Church was a little high and late, as the runner slid in safe for a 6-3 Falcon lead.

“Trenton did a great job settling in and holding them down but our bats had trouble making the adjustments we needed to,” Ward said.

After senior Izaac McGuire relieved Mastin on the mound, Cannon Doub walked, then West senior first baseman Collin McGuire fielded a groundball, tagged first and fired to second to potentially end the inning, but the throw was wide right and into the outfield, allowing Wall to score, making it 7-3.

West rallied for a run in the bottom of the seventh. Facing new reliever Henry Logan and two outs, junior Evan Johnson singled on a big hop over the third baseman’s glove, took second on a wild pitch and scored on Mastin’s infield single.

Logan ended it with a high swinging fastball to senior Riley Ledford, the two-time MVAC pitcher of the year who was unable to take the mound after injuring his left throwing arm on May 28.

“The seniors have never lost a conference championship and have raised the bar for our future teams,” noted Ward. “They all have a special place in our program and in my heart, for their actions on the field, off the field, with my own boys, and in the work they have been willing to put in. Once a Blackhawk, always a Blackhawk.”

The Falcons stunned the partisan home crowd with three runs in the top of the first. A bases-loaded walk issued by Mastin scored the first, then Beane’s two-out, sharp single just past a diving West shortstop Carson Edmiston plated two more.

West responded, though, with three of their own in the bottom of the frame. Church led off with a single to right, moved to second on a balk, took third on a wild pitch and scored on Johnson’s sharp grounder up the middle.

A bases-loaded free pass chased Forbush starter Adam Conrad, then a four-pitch walk by Will Summers tied it at 3-all. A called third strike and flyout to center got Summers, the eventual winning pitcher, out of a bases-full jam.

Mastin took only the second loss of his prep varsity career. He was 5-0 as a sophomore, 0-1 as a junior in the pandemic-shortened 2020 season and 4-1 this season.

“I am tremendously proud of our team and our players,” concluded Ward. “They played the game right, loved each other as brothers, and set an example for younger players to follow for years to come.

“It hurts to lose the way we did but I am grateful for the opportunity God has given me in being their coach.”

The Cinderfella road warriors from East Bend advanced to the 2A West Region semifinals on Saturday. Forbush, runner-up in the Western Piedmont 2A, will play at 15-1 East Lincoln in Denver.

Generally sunny despite a few afternoon clouds. Hot. High around 95F. Winds WSW at 5 to 10 mph.

Partly cloudy in the evening with more clouds for later at night. A stray shower or thunderstorm is possible. Low 72F. Winds light and variable.

Partly cloudy in the evening. Increasing clouds with periods of showers after midnight. Low 67F. Winds light and variable. Chance of rain 40%.

An isolated thunderstorm possible during the evening, then occasional showers overnight. Low 62F. Winds light and variable. Chance of rain 40%.

Scattered thunderstorms in the evening, then variable clouds overnight with more showers at times. Low 61F. Winds light and variable. Chance of rain 40%.