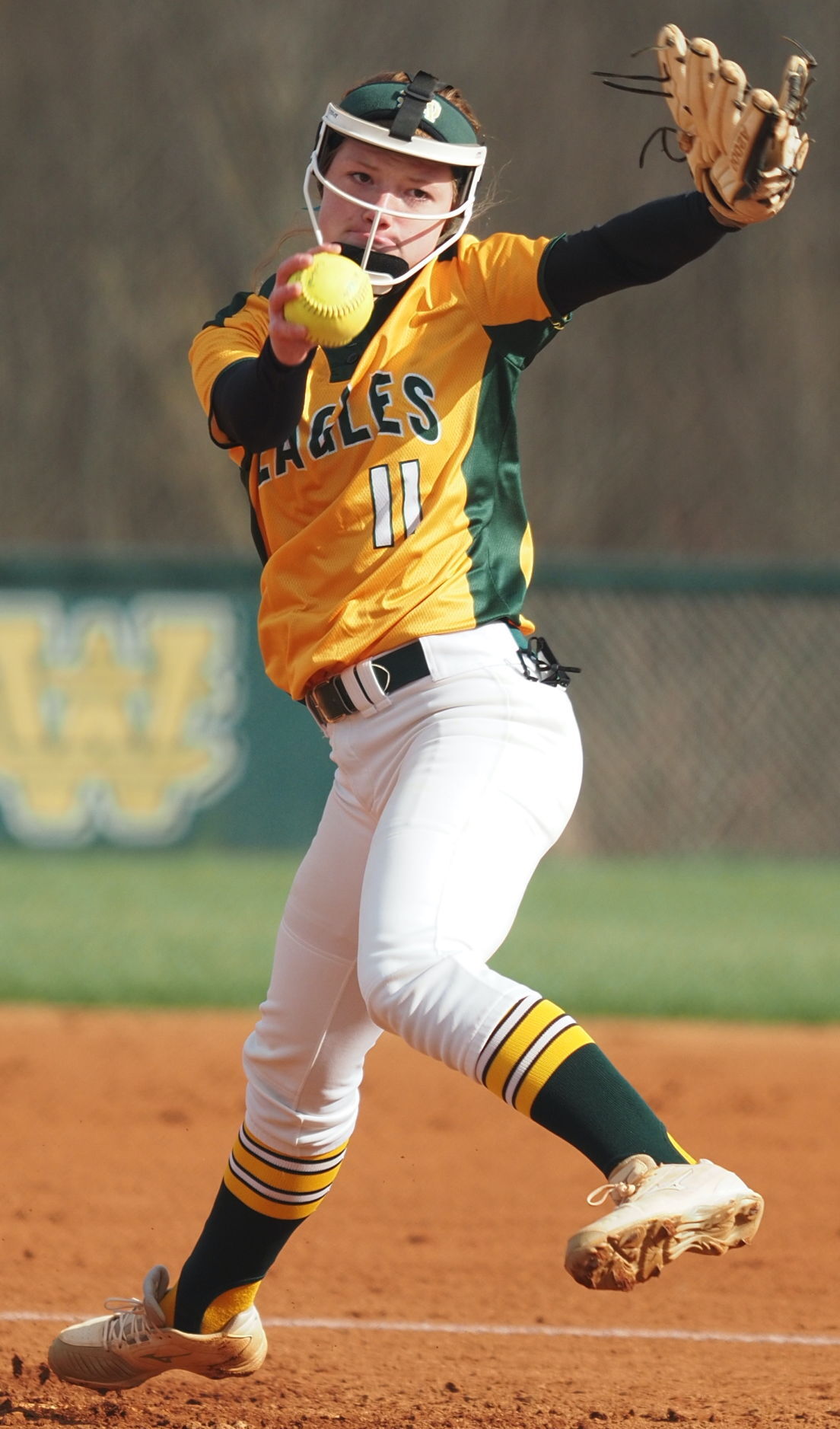 Eagle junior Isabelle Curry delivers a pitch in her club’s 15-4 win Thursday over Ashe County in Moravian Falls. Curry and the Eagles both improved to 5-1 on the season. 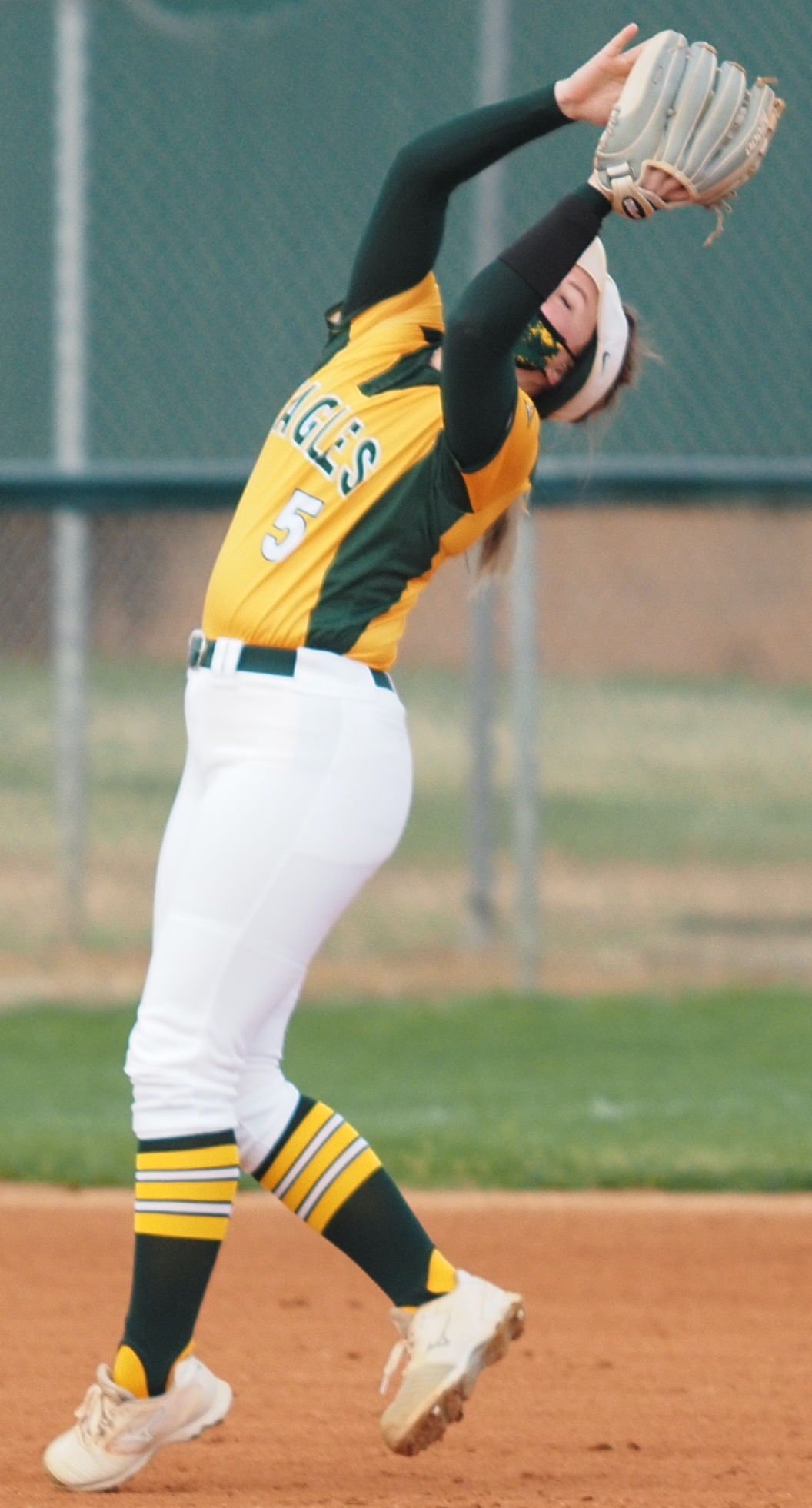 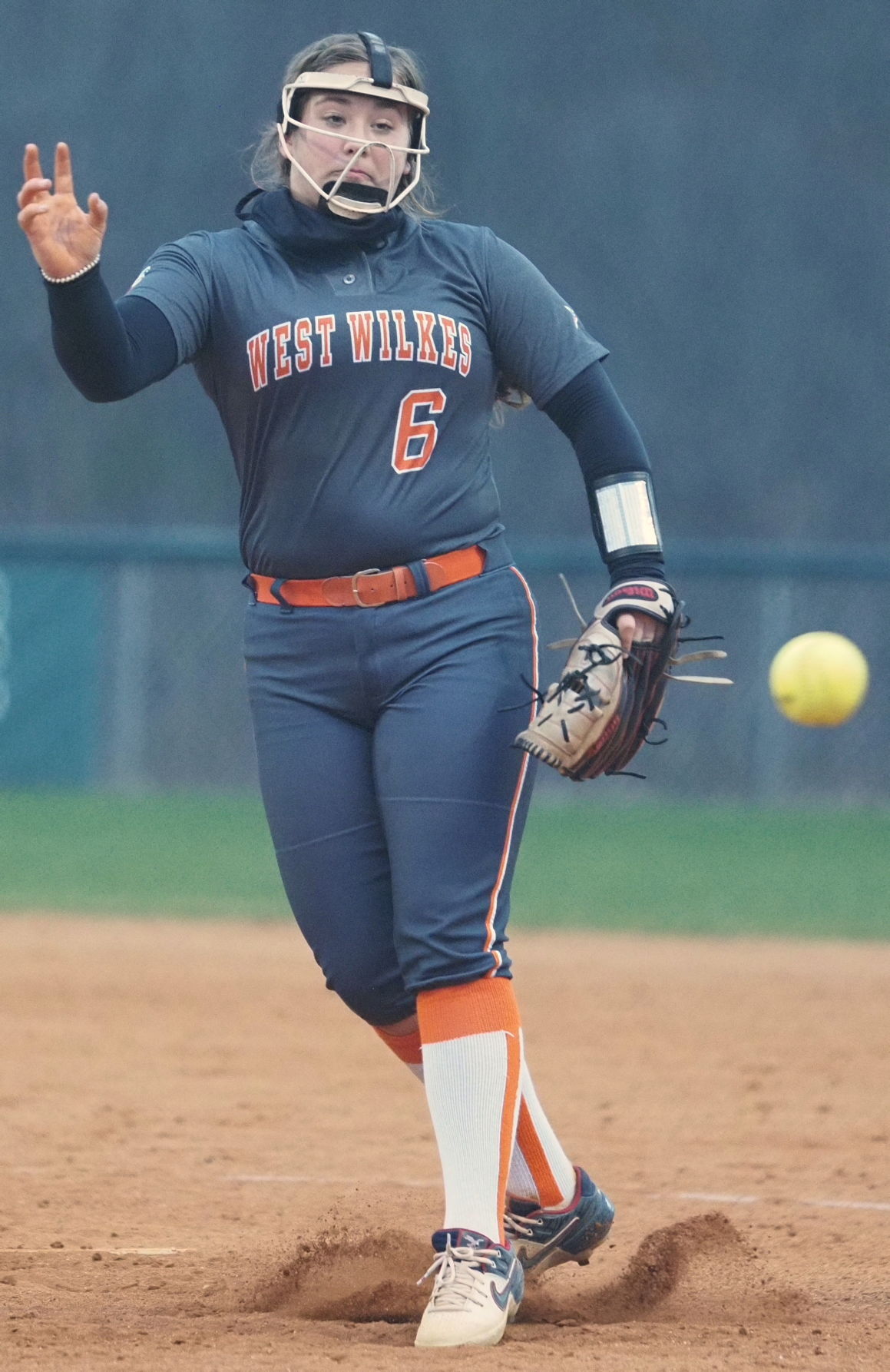 West freshman pitcher Lily Proffit, here delivering a pitch earlier in the season, improved to 4-0 with a complete-game win Thursday at Alleghany, striking out 16 Trojans.

Eagle junior Isabelle Curry delivers a pitch in her club’s 15-4 win Thursday over Ashe County in Moravian Falls. Curry and the Eagles both improved to 5-1 on the season.

West freshman pitcher Lily Proffit, here delivering a pitch earlier in the season, improved to 4-0 with a complete-game win Thursday at Alleghany, striking out 16 Trojans.

Ferguson, a freshman, went 3-for-4 at the plate with a home run, double and six RBIs. Her two-run shot in the fifth completed the scoring and ended the game via the 10-run rule in the Mountain Valley 1A/2A Athletic Conference.

“I couldn’t be more proud of how the whole team rallied together to seal another nice win,” said Eagle Coach Colby Shell. “We are just now starting to put all of the pieces together. When everything works out right, we are going to really show people what we can do.”

Down 2-0, the Eagles exploded for eight runs in the bottom of the second, capped by Saleen Miller’s two-run homer. Christa Walsh and Katie Nichols also drove in two runs for Central.

Nichols, a junior, reached base and scored all four times she stepped to the plate. “The bottom of our lineup is just coming through so big for us,” noted Shell. “They get on base then the top drives them in.”

Junior pitcher Isabelle Curry (5-1) allowed four hits and two earned runs in three innings of work. She walked one and struck out six before being relieved in the fourth by sophomore Madison Hamby.

“I liked most how the ladies got behind Madison when we put her in to pitch,” added Shell. “Red (Curry) is a tough kid but all those innings on (March 30) took a lot out of her so we wanted to be cautious.”

Hamby earned the save, allowing three hits and two earned runs while walking one and striking out three.

Ashe opened the scoring with a two-run jack to right-center field by Cierra Burgess in the top of the second. Gwyneth Wood singled to right center to lead off the frame.

The Eagles improved to 5-1, one game behind league-leading West Wilkes, while the Huskies faltered to 2-4.

West Wilkes scored twice in the last inning of a 4-2 win Thursday over Alleghany in snowy Sparta.

Senior Paige Phillips and junior Kacey Triplett cracked home runs for the Blackhawks while Sophie Nichols and Presley Dancy had doubles. Kendall Stanley’s single was the other hit for the victors.

Lily Proffit went the distance on the mound, allowing only one hit and two earned runs while walking four and striking out 16. The freshman hurler improved to 4-0 in outdueling Kenzi Lyall, who whiffed 13 in a losing cause.

West is 6-0 and occupies first place in the MVAC. The top-ranked 2A team in the state, the Blackhawks are riding a 15-game winning streak.

The Trojans backslid to 4-2 and into third place in the MVAC, having been leapfrogged by Wilkes Central, a 15-4 winner over Ashe on Thursday.

Elkin scored six times in the top of the seventh to take a 13-6 win Monday over East Wilkes in Ronda.

The Buckin’ Elks evened their season mark at 3-3 while the Cardinals tripped to 1-5.

The Rams evened their mark at 3-3 while the Vikings slipped to 0-6.

West Wilkes posted a 17-3 win over North Wilkes in Hays on March 30.

The game was shortened to five innings due to the MVAC’s 10-run rule.

West had 11 steals as a team. “I thought we ran the bases well,” said Michael Woodruff, the West coach. “There was a lot of heads-up baserunning; we were making great decisions and putting pressure on the defense.”

Senior Carly Parsons (2-0) got the complete-game victory, allowing five hits and a single earned run while walking none and striking out six. “Carly threw a good game for us,” added Woodruff.

Parsons helped her own cause with a two-run double. Senior Paige Phillips drew three walks, stole two bases and scored four times for the Blackhawks.

With their 14th-straight win, the league-leading Blackhawks moved to 5-0 while the Vikings remained winless in five games.

Wilkes Central held off Starmount for a 4-2 win in Boonville on March 30.

“A win like this is good for learning,” said Eagle Coach Colby Shell. “You have to know what you are made of when you have a (4-0) lead like that and someone starts a rally. I couldn’t be more proud of another great win.”

The Eagles took a 1-0 lead in the first inning after showing discipline at the plate, Shell said.

Then Central plated three more in the second, the big hit being senior Christa Walsh’s two-run double. Juniors Saleen Miller and Isabelle Curry drove in the other two runs for the Eagles.

“We came out and jumped on them quick—the opposite of what we normally do,” noted Shell. Walsh, Curry and freshman Abby Underwood each had two hits for the Eagles.

On the mound, Curry went the distance and improved to 4-1 with a four-hit, 15-strikeout performance. “Isabelle was tough again on the mount. Faced with adversity in the sixth and seventh, she and the defense really stepped up to shut things down and come out winners.”

The Eagles improved to 4-1 while the Rams stumbled to 2-3.

Alleghany picked up an 8-1 victory over East Wilkes in Sparta on March 30.

The Cardinals (1-4) scored the game’s opening run in the top of the first but were then shut down by senior Kenzi Lyall, who scattered four hits over seven innings. She walked one and struck out 10.

The Trojans bettered to 4-1 and remained in a second-place tie with Wilkes Central.

A few clouds from time to time. Low near 50F. Winds light and variable.