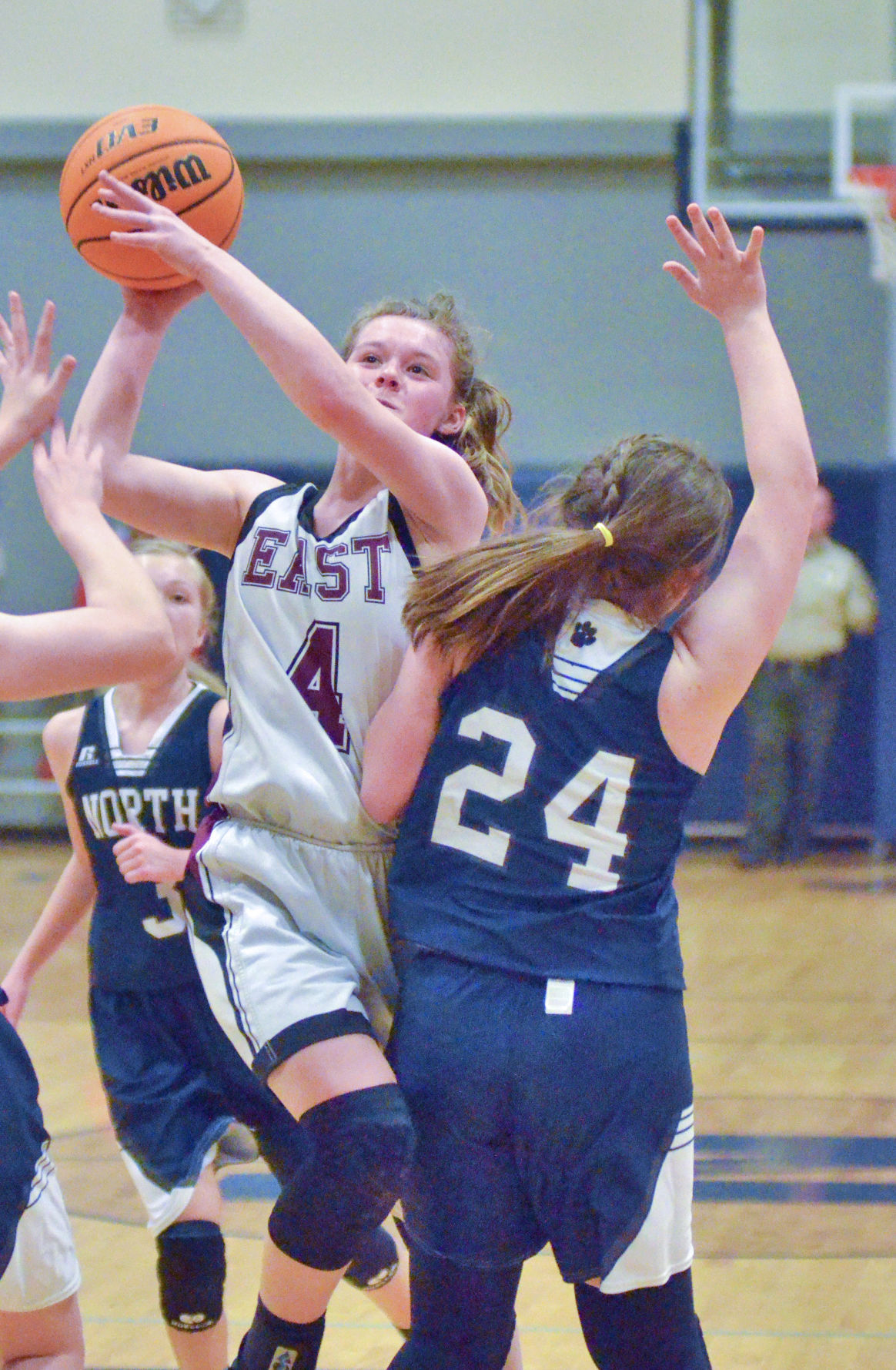 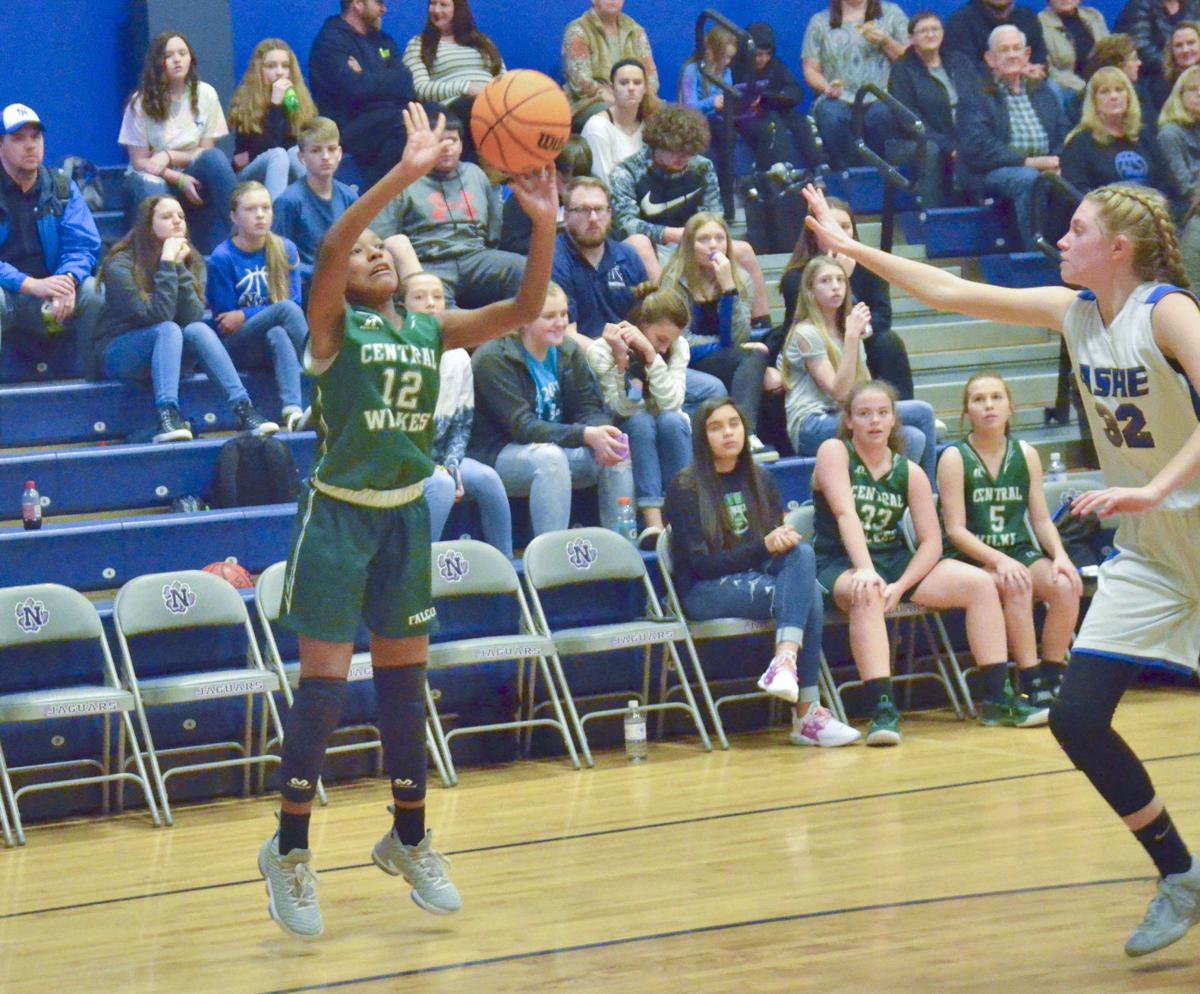 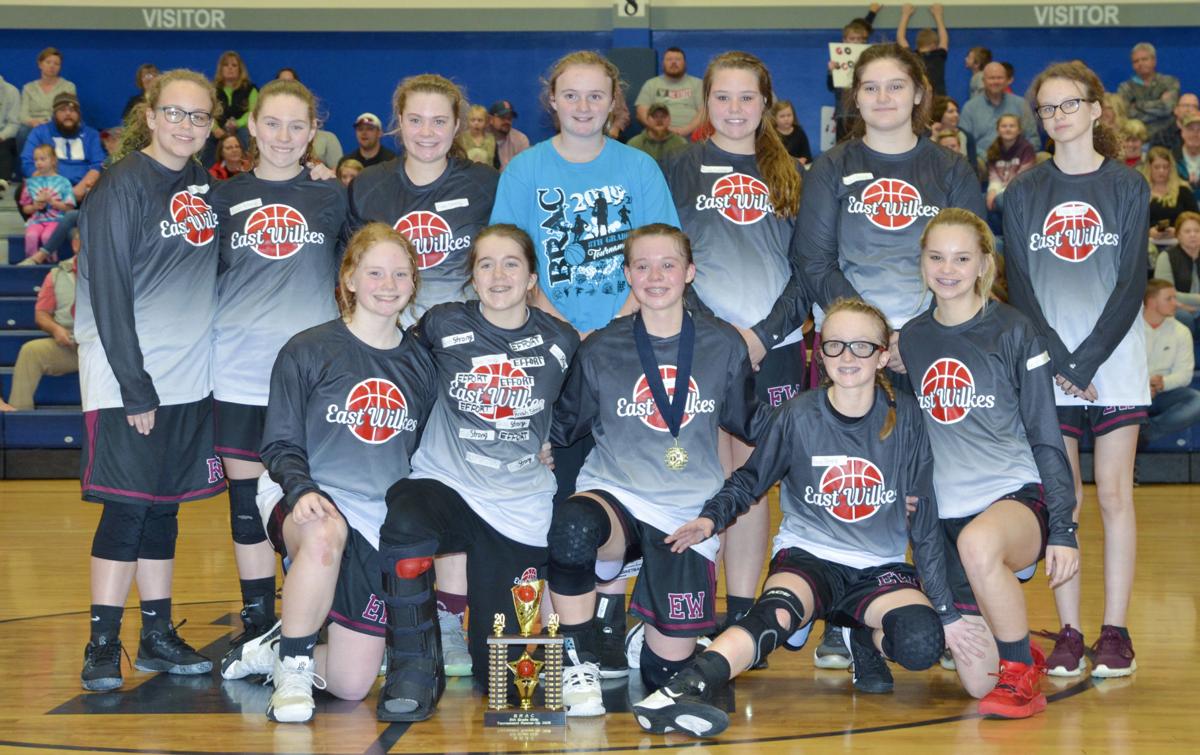 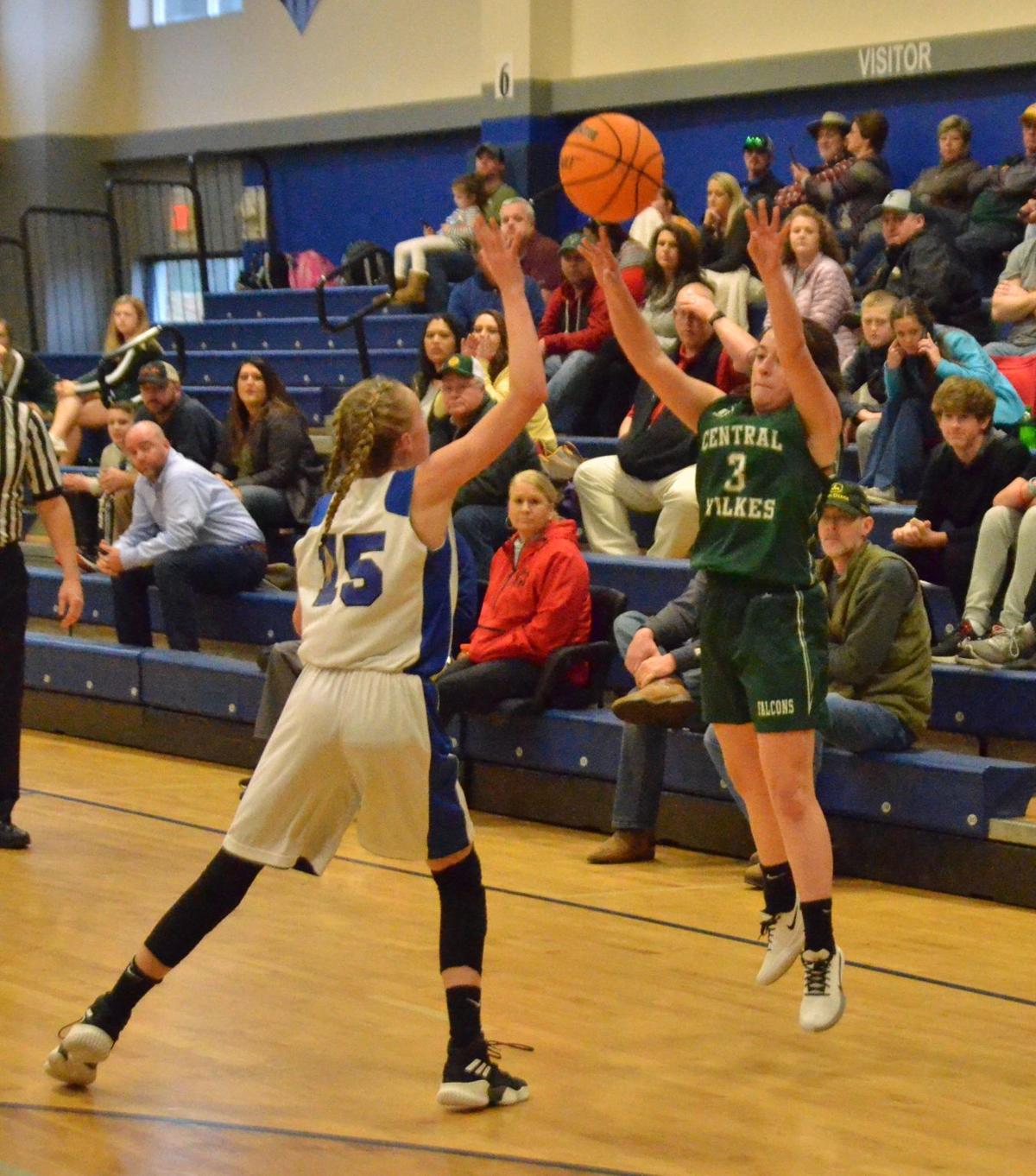 Central Wilkes' Faith Reeves puts up a 3-pointer against Ashe County's Paige Overcash in the second half of Monday afternoon's BRAC semifinal game. 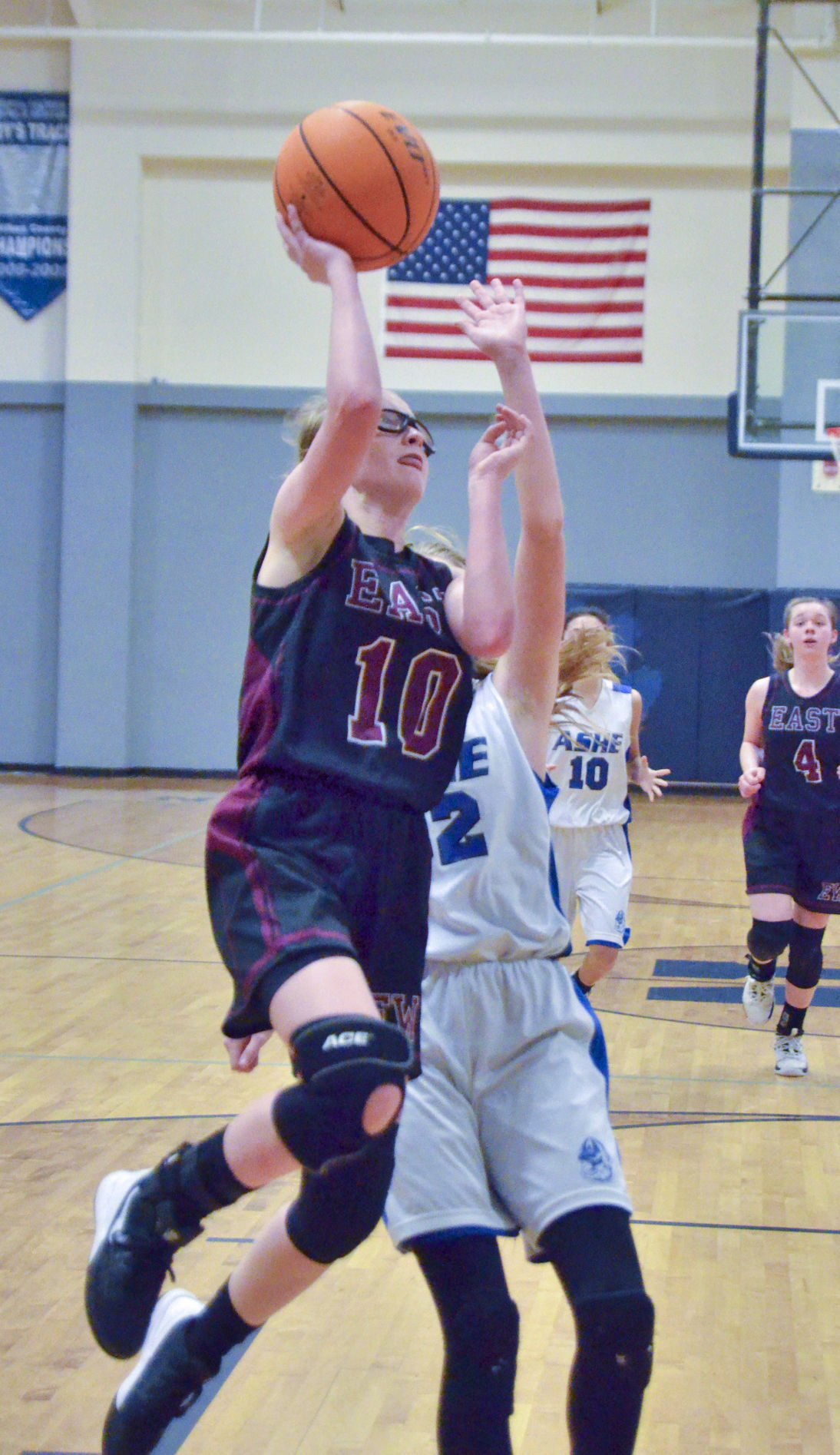 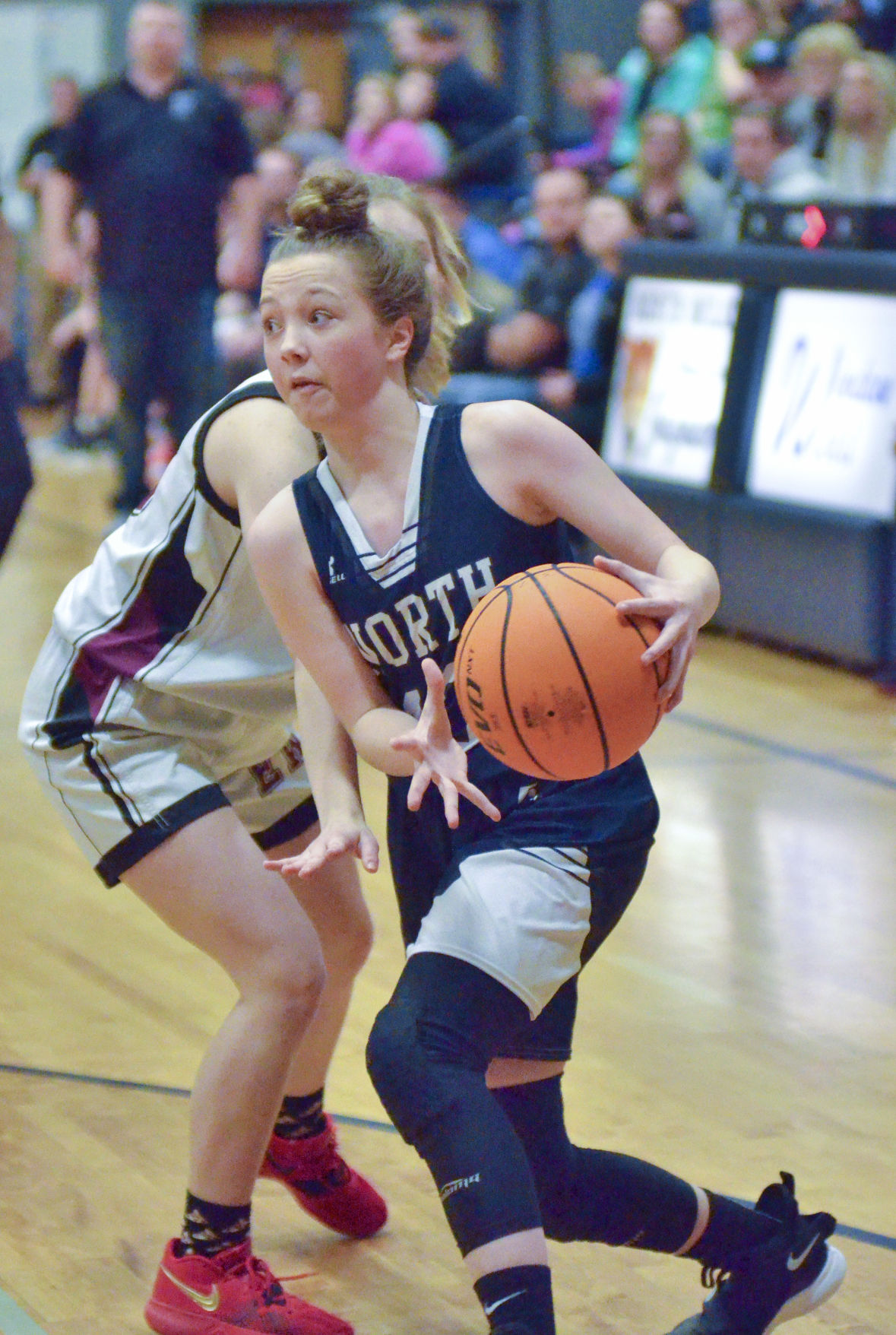 Central Wilkes' Faith Reeves puts up a 3-pointer against Ashe County's Paige Overcash in the second half of Monday afternoon's BRAC semifinal game.

The No. 1 seed Bulldogs scored the game’s first eight points and never looked back, defeating East Wilkes 37-25 in the finals at North Wilkes Middle School.

Ashe County led 8-0 after a layup from Macie Miller while the No. 2 Scorpions didn’t get on the scoreboard until the 2:20 mark of the opening quarter with a Jayden Hutchison free throw.

East Wilkes didn’t hit its first field goal until the last 15 seconds of the quarter with a runner in the lane from Peyton Mastin.

Mastin, who was named to the all-tournament team, did her best to help the Scorpions claw back into the game. After hitting a pair of free throws, Mastin collected a steal at midcourt and hit an easy layup.

A runner from Abby Hatley and a short jumper from Lexis Winters cut the Bulldogs lead to 12-11 less than two minutes into the second.

Then the duo of Miller and Abigail Jones — the tournament’s most valuable player — took control.

Miller, who led the way with a game-high 14 points, completed a 3-point play and Jones converted a putback to spur a 13-4 run to close out the half.

Kelsea Absher chipped in six points for the Scorpions, who end their season at 12-4.

Paige Overcash added 13 points for the Bulldogs and Jones chipped in seven.

Note: In addition to Jones and Mastin, Miller was also named to the all-tournament team, as were Central Wilkes’ Jianna Holmes and North Wilkes’ Olivia Rhoades.

The Scorpions pulled out a BRAC semifinal win in a hotly-contested game on Monday evening at North Wilkes Middle School.

A big reason for the Scorpions’ victory was the ability to hit free throws late as they went 8-of-11 from the charity stripe in the fourth.

Mastin, who finished with a game-high 13 points, was 4-of-6 with that quartet of points icing the game in the final 30 seconds. A late layup was added in the middle of the two trips to the free-throw line.

But early on, North Wilkes was in control thanks to the play of Abbie Myers and Rhoades.

Myers knocked down a 3-pointer and Rhoades, who paced the Jaguars with 11 points, connected on a runner to beat the buzzer and give North a 13-6 lead after a quarter.

The two teams were tied 18-18 at halftime, then the Scorpions’ defense stepped up, holding North to just a 3-pointer from Myers in the quarter.

After an Absher layup, Jayden Hutchison gave East the lead for good at 22-21.  Hatley collected a steal at half court and hit a layup in the final 30 seconds of the quarter to extend the lead to three (24-21).

Hutchision, who added seven points, pushed the lead to 28-24 but the Jaguars got as close as one at 29-28 with 1:41 to play courtesy of a putback from Salem Adams.

Myers added eight points for the Jaguars and Natalie Mathis chipped in five.

A double-digit halftime lead propelled the top-seeded Bulldogs into the BRAC championship game on Monday afternoon.

Ashe’s defense did its part as it held the No. 4 Falcons to single digits in every quarter. Offensively, Jones led the way for Ashe County with a game-high 23 points and Katlyn French added 12.

Rain showers in the morning with precipitation turning to a mixture of rain and snow in the afternoon. Temps nearly steady in the mid to upper 30s. Winds light and variable. Chance of precip 70%.

Partly cloudy in the evening then becoming cloudy with periods of rain after midnight. Low 39F. Winds light and variable. Chance of rain 80%.