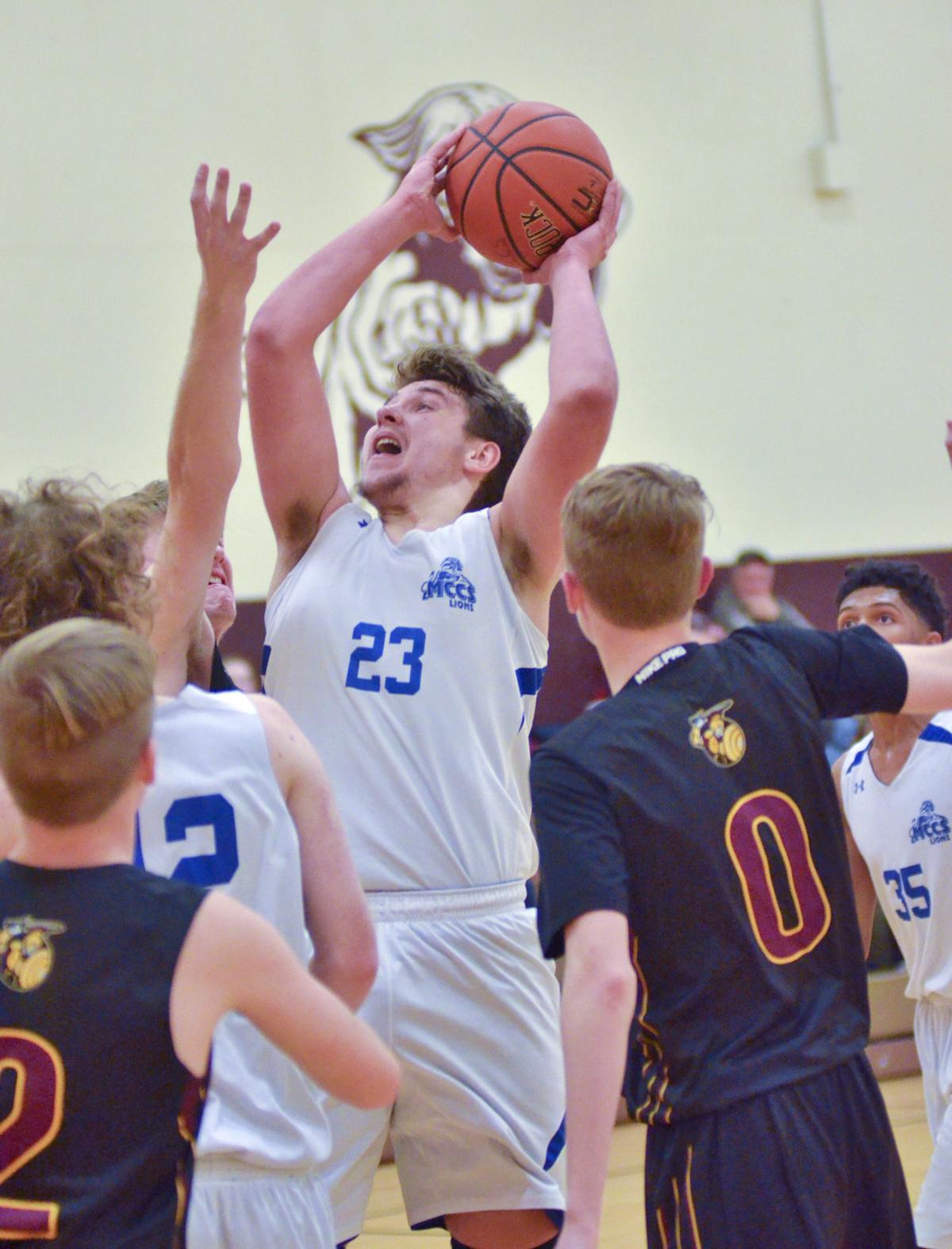 MILLERS CREEK CHRISTIAN’S Eathan Roten puts up a jumper in heavy traffic in the second quarter. Roten, who was fouled on the play, converted a 3-point play for part of his game-high 21 points on Tuesday night. 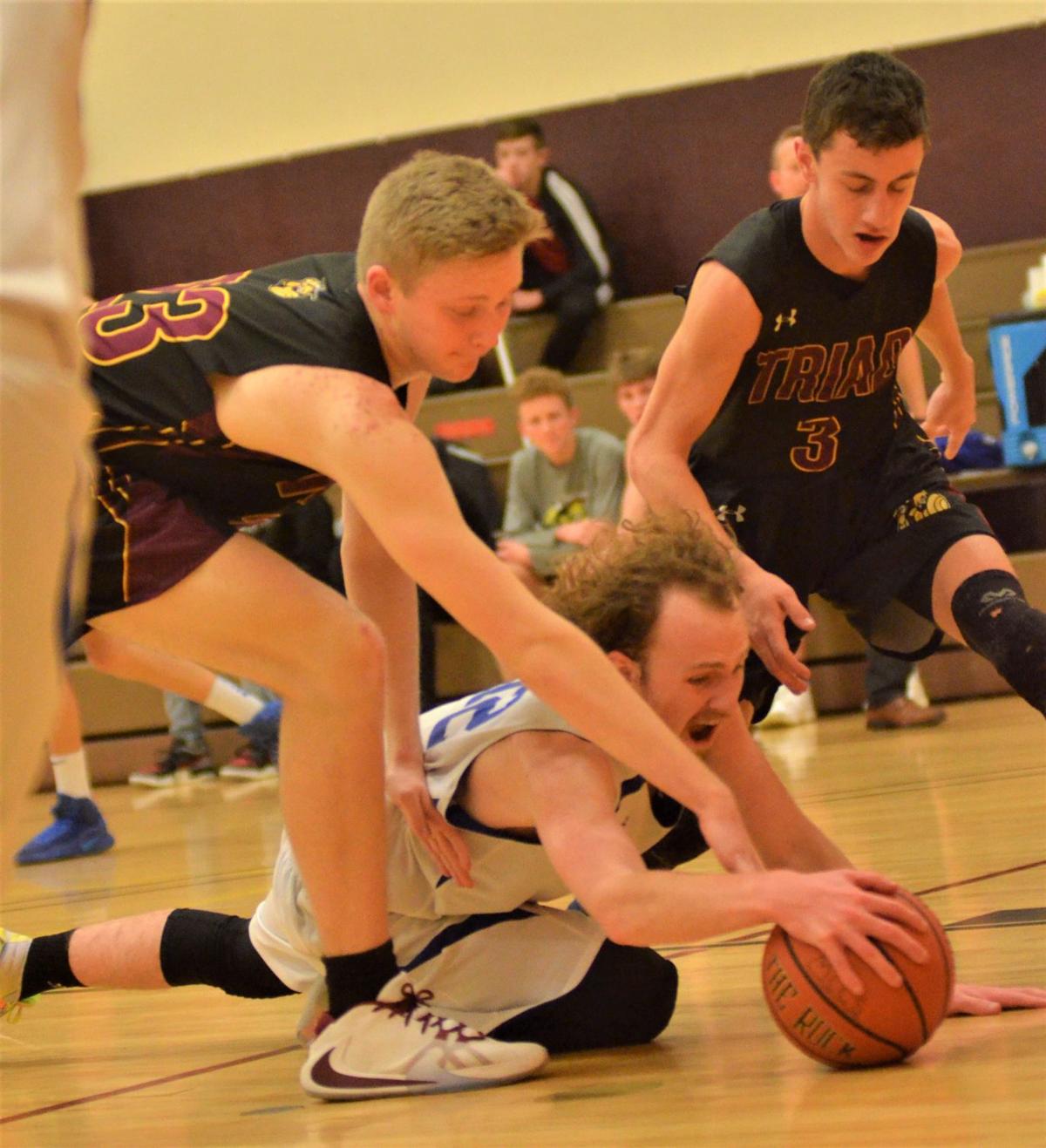 Millers Creek Christian's Will Huffman dives on a loose ball in the second quarter of Tuesday night's game. 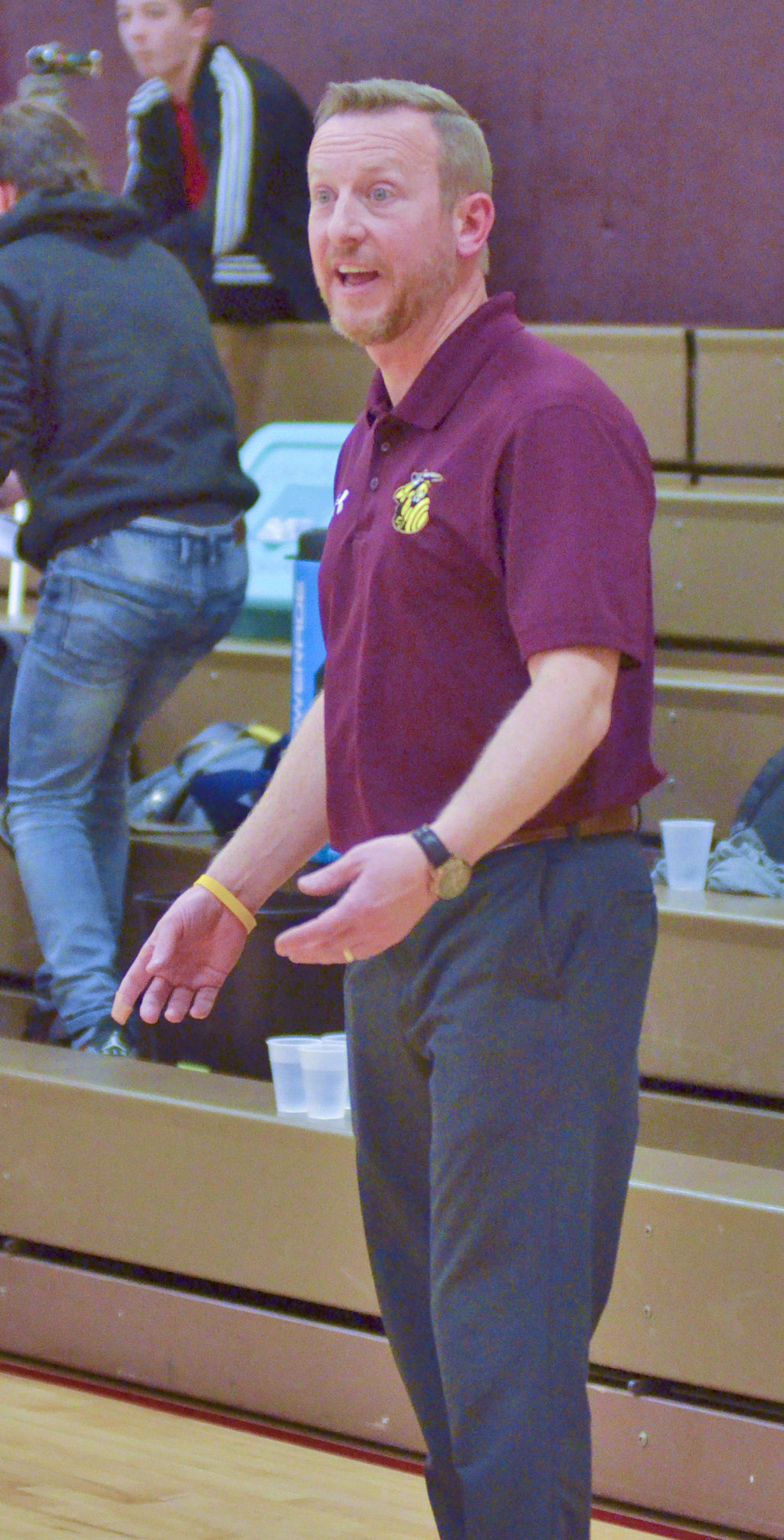 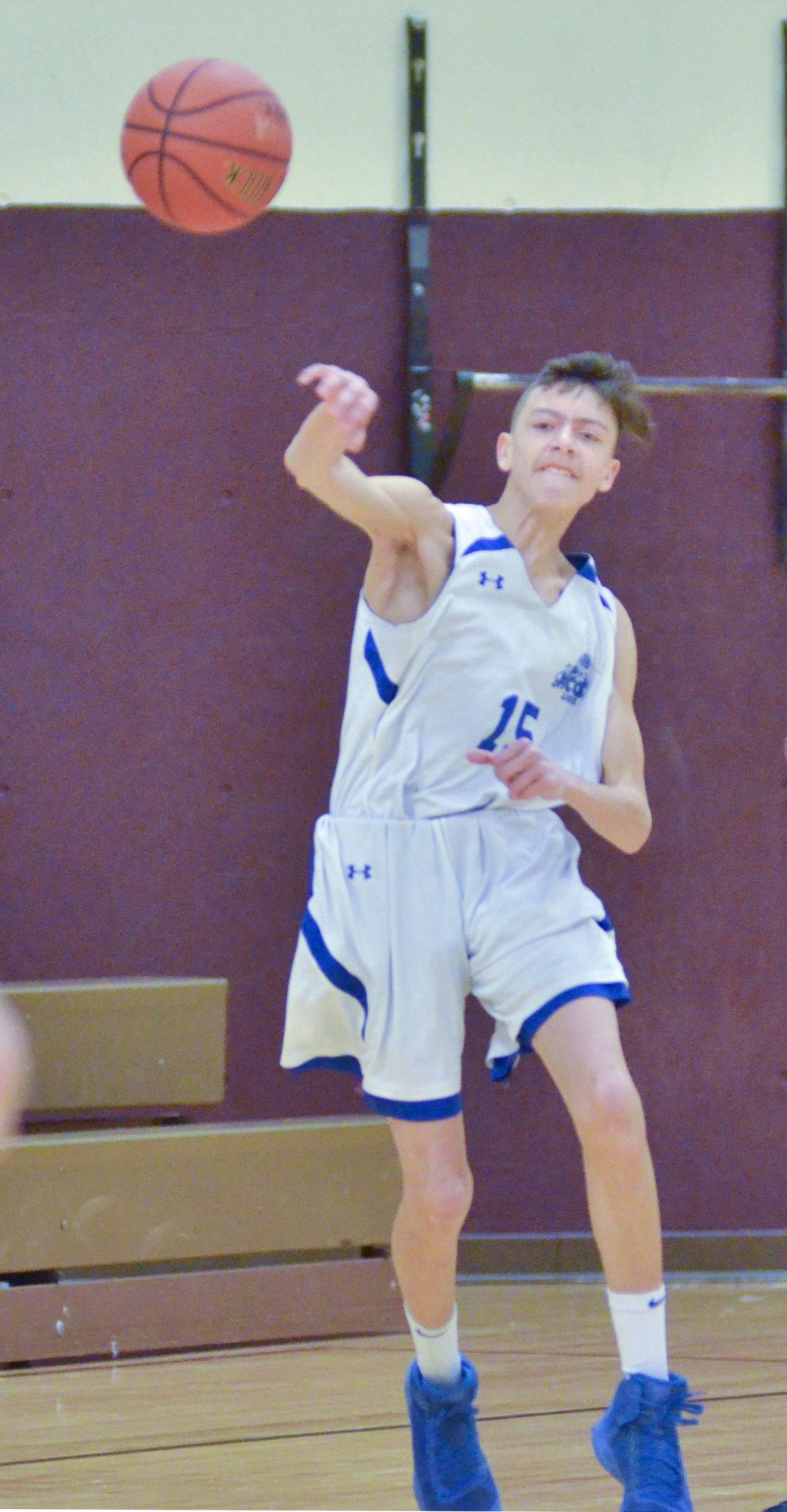 Caleb Eller, seen here passing up the floor in the first half on Tuesday night, finished with 12 points (including three 3-pointers) for Millers Creek Christian. 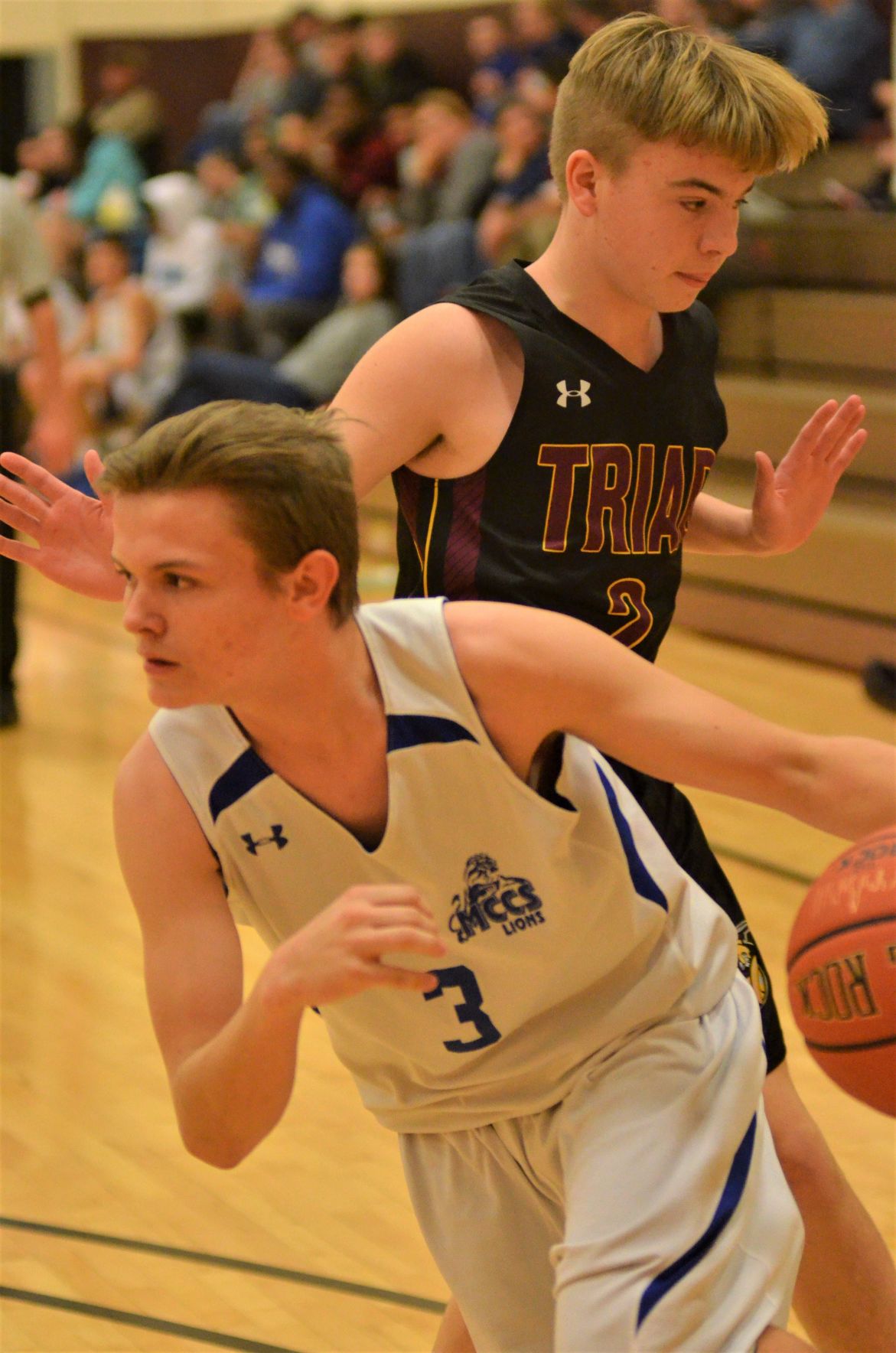 MILLERS CREEK CHRISTIAN’S Eathan Roten puts up a jumper in heavy traffic in the second quarter. Roten, who was fouled on the play, converted a 3-point play for part of his game-high 21 points on Tuesday night.

Millers Creek Christian's Will Huffman dives on a loose ball in the second quarter of Tuesday night's game.

No late game comeback was needed during the rematch on Tuesday night as Triad Baptist bested the Lions 56-45 inside Bumgarner Gym on the campus of Wilkes Community College.

Instead, the Titans, who improved to 2-0 in Central Carolina Conference play, jumped out to a double-digit lead after one quarter and never trailed.

Triad Baptist (6-9) led by as many as 17-4 in the opening quarter, but the Lions began to chip away at the deficit.

After Triad Baptist’s Drew Colenzo made it a 10-point lead (19-9) with a layup, Eathan Roten hit a pair of free throws and then assisted on a Nic Eller layup to make it a 19-15 game midway through the second quarter.

Laken Locklear beat the first half buzzer to make it an 11-point advantage (29-18).

“The first quarter was horrible. We kept trying to go one-on-one and all of sudden, we’re down 13. You’re not going to win ball games scoring six points in a quarter,” said Millers Creek Christian Head Coach David Gurchiek. “We made too many mistakes but hats off to Triad, they’re fundamentally sound but we didn’t help ourselves.

“I just have to do a better job of coaching these guys because they’re not recognizing what’s out there and they just want to go one-on-one and we’ve got to stop that because we’re not capable of doing that.”

The Lions (3-7, 0-6) made things interesting late after trailing by double digits the entire third quarter.

Millers Creek cut it as close as seven at 41-34 with 6:57 to play after a Caleb Eller 3-pointer and a basket from Roten.

The senior led the Lions with a game-high 21 points while Eller finished with 12 on the strength of a trio of 3-pointers.

Millers Creek couldn’t get any closer as Colenzo connected on a 3-pointer to increase the lead back to double digits. The closest the Lions could get was 50-39 with a little more than two minutes left following a runner in the lane by Roten.

“They had the fight,” said Gurchiek. “I’ve got some great players, we’ve got Caleb Eller out there now and he’s finally eligible to play and that’s definitely going to help out and give some of the other guys a break.”

Notes: Nic Eller and Will Huffman chipped in six points apiece for the Lions, who returned to the court on Thursday against Heritage Christian. Eller and Roten led Millers Creek on the boards with 11 rebounds apiece; Huffman added nine boards. The Titans, who traveled to Forsyth Home Educators on Thursday and host North Carolina Leadership Academy tonight, received 12 points from Jack Hoppe and 10 apiece from Colenzo and Carson Fitch. Triad Baptist Christian Academy is coached by Michael Bowers. Bowers, a North Wilkes graduate, was previously an assistant coach at East Wilkes under former Cardinal Head Coach Ritchie Cornette.