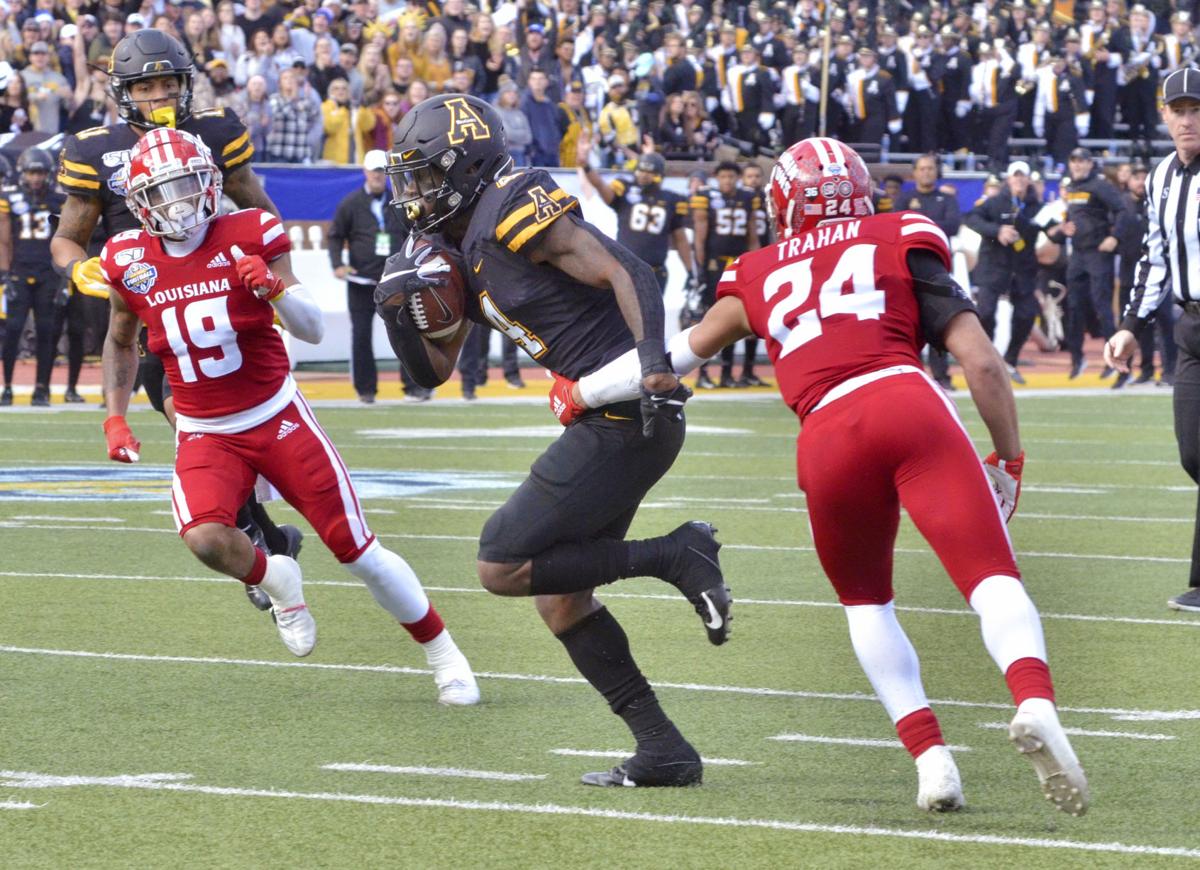 DAETRICH HARRINGTON shakes off Louisiana’s Bralen Trahan and races to the end zone for a 25-yard touchdown in the second quarter of Appalachian State’s win in the Sun Belt Conference championship game on Saturday afternoon. 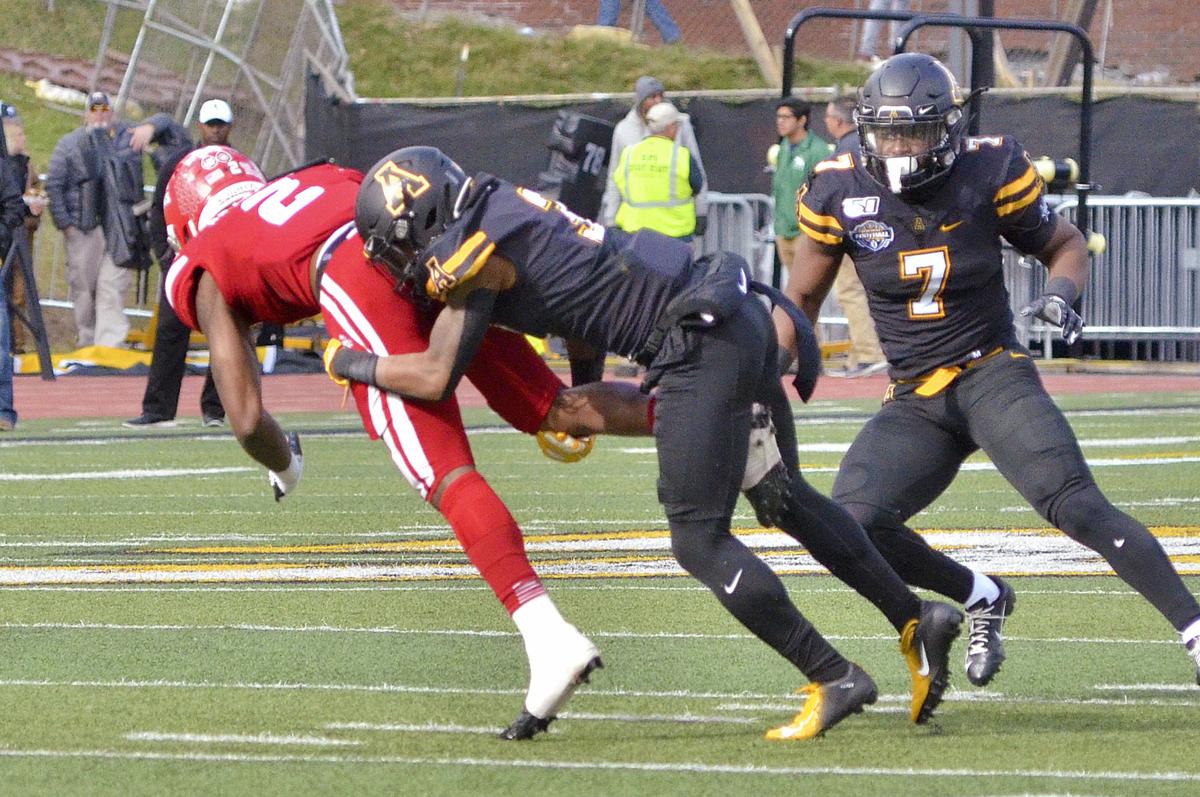 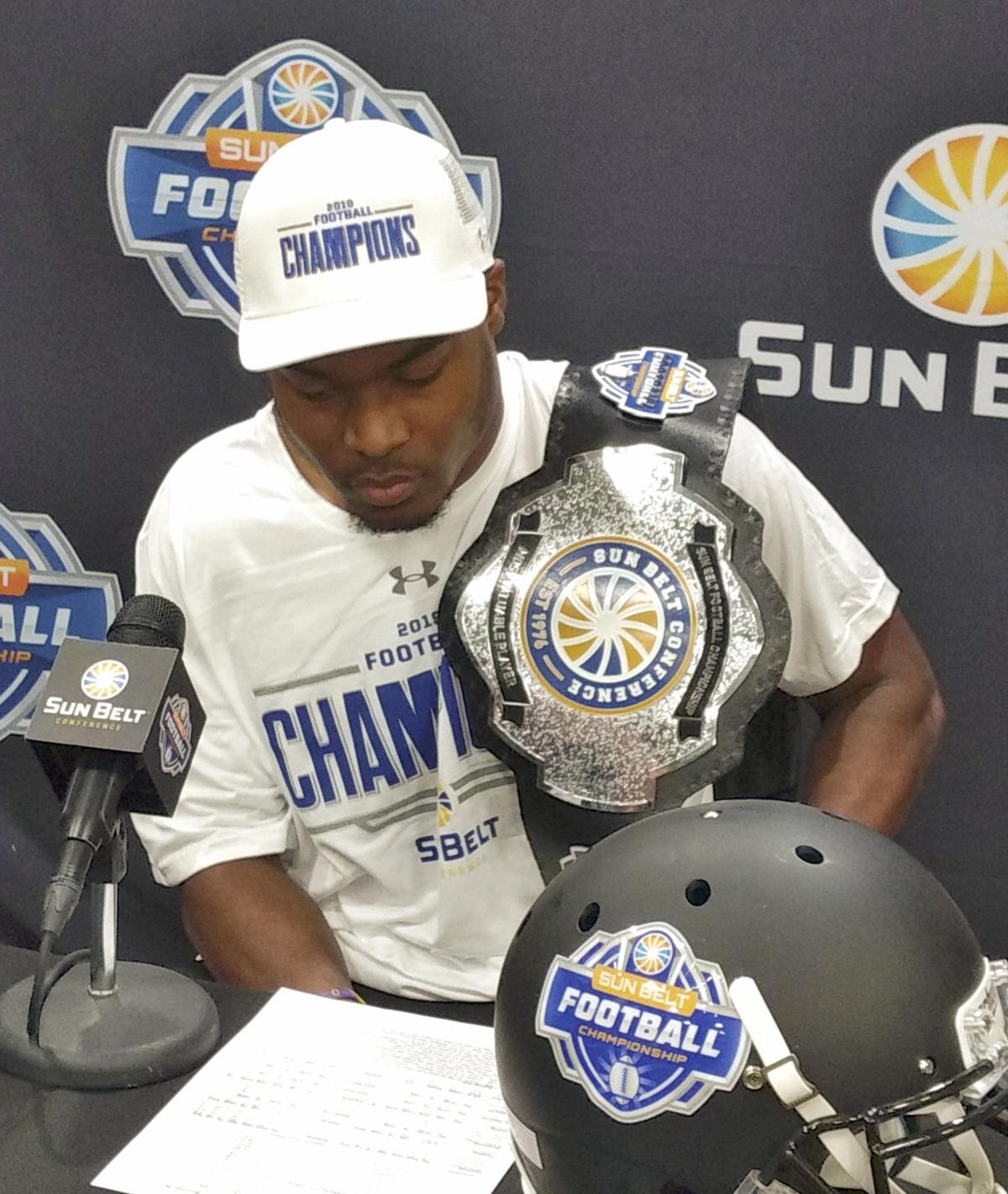 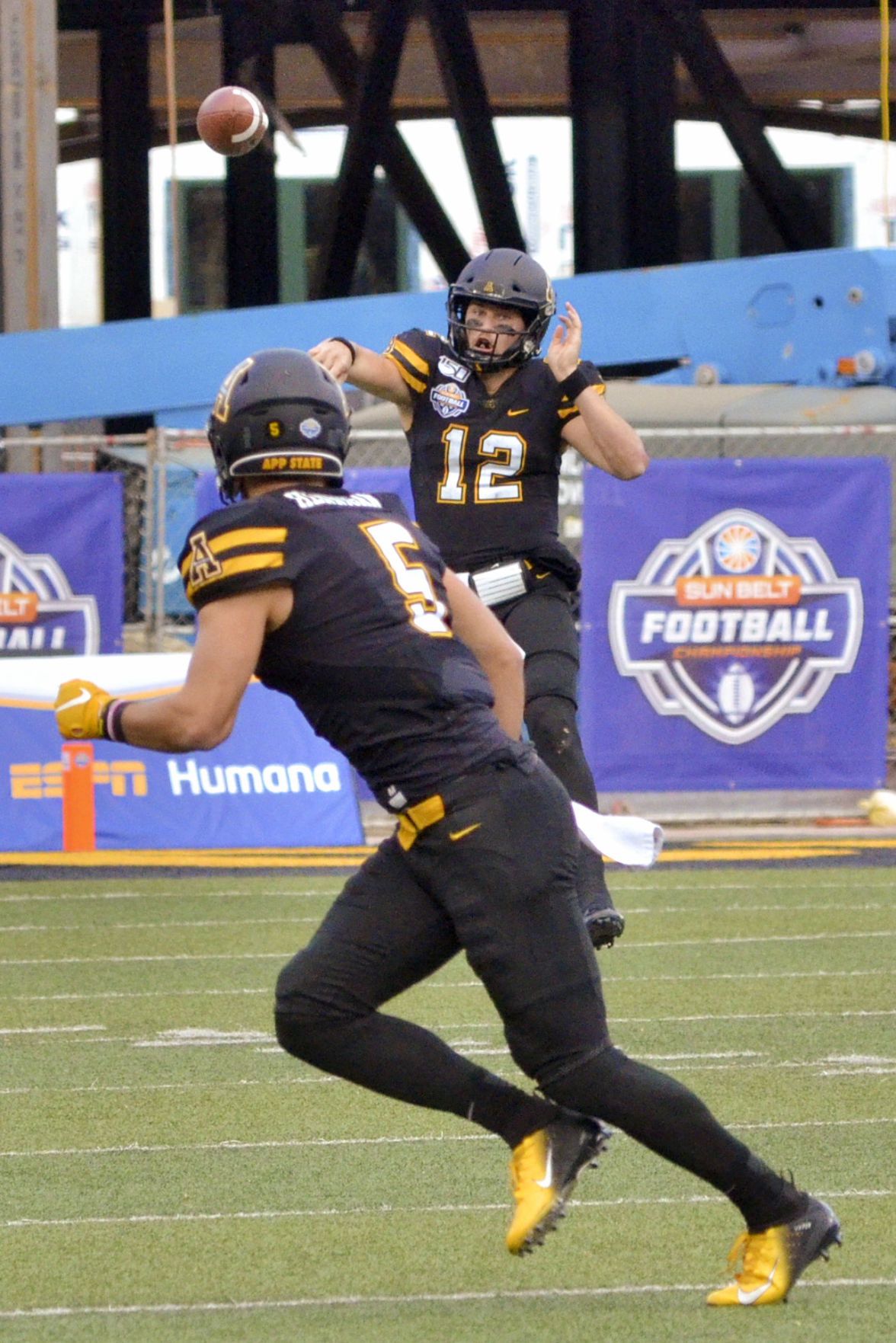 Zac Thomas completes a pass to Thomas Hennigan in the second quarter of Saturday's game.

DAETRICH HARRINGTON shakes off Louisiana’s Bralen Trahan and races to the end zone for a 25-yard touchdown in the second quarter of Appalachian State’s win in the Sun Belt Conference championship game on Saturday afternoon.

Whether the committee was swayed or not, the Mountaineers accomplished one of their main goals for the fall by retaining the Sun Belt Conference championship trophy.

“It just shows you what kind of leadership we have,” Appalachian State quarterback Zac Thomas said. “The players we have, the seniors, we took it in when Drink first got here in the spring practice that we had one goal in mind, and that was all the same goal we wanted – to win a conference championship.

“The seniors did a good job of leading and we bought into them and they bought into us,” added Thomas. “We kept performing. We’re a really good football team. You can see that, so it’s very rewarding to go out there and win another one, back-to-back. You can’t ask for anything better than that.”

The Mountaineers never trailed on Saturday, but the Rajin’ Cajuns (10-2) made things interesting after being behind by as many as three scores.

Trailing 45-24 after a 35-yard field goal from Appalachian State’s Chandler Staton with 8:14 to play, Louisiana rallied for two scores, including a 38-yard touchdown catch by Peter LeBlanc from Levi Lewis.

Stevie Artigue, who hit a 53-yard field goal earlier in the game, made it a one-possession game with 1:19 to play on the extra point after LeBlanc’s touchdown reception.

However, Louisiana couldn’t get any closer as Artigue’s onside kick attempt went out of bounds and the Mountaineers were able to run out the clock.

“We just dug too deep of a hole. It was 21-0 before you could look around. I was proud from that point forward, and I thought our team responded well,” Louisiana Head Coach Billy Napier said. “We kind of battled our way back into the game. There were several opportunities during that stretch where we did not capitalize. Certainly, it ended up costing us. But for us to get back in position to make it a one-score game, I’m proud of our boys for doing that.”

Darrynton Evans was named the championship game’s most valuable player for the second year in a row thanks to scoring three touchdowns in the first quarter.

The junior quickly set the tone on the sixth play of the game when he took a screen pass from Thomas and raced to the end zone for a 58-yard touchdown.

“I’ve had it happen in high school a little bit, but to do it at the collegiate level is special,” Evans said about scoring three touchdowns that quickly. “It goes back to this team with everybody buying in and everybody doing their job where it makes my job easier.

After a Rajin’ Cajuns fumble on their next drive, App scored again, this time with Evans on the ground (8-yard run); he then added a five-yard pass from Thomas for a 21-0 lead late in the first quarter.

As a whole, the Mountaineers’ rushing game was very balanced.  Daetrich Harrington and Marcus Williams Jr., who each had scoring touchdowns in the game, finished with 89 and 78 yards, respectively, while Evans finished with 73 yards.

Harrington’s score made it 35-14 late in the second quarter.

“I couldn’t be any prouder of our football team. I knew before the game that it was probably the shortest and best pregame speech, I’ve ever given,” said Drinkwitz. “These guys were raring to go and they knew what it was going to take. They started fast.

The Mountaineers scored touchdowns on their first five offensive possessions in the first half. But it was the complete opposite in the second half as Staton’s field goal was the only points generated by Appalachian’s offense.

But Josh Thomas helped the Mountaineers get into the end zone in the second half as the senior intercepted a Lewis pass attempt and returned it 16 yards for the pick-six and a 42-17 lead in the third quarter.

“It was huge. Offensively, we didn’t do much in the second half, so for us to get those seven points on the board with Josh was awesome,” Drinkwitz said about Thomas’ pick-six. “He’s been a great player all year long and for him to get that Pick-6 was awesome for him and special for our football team.”

No. 20 App State to face Blazers in New Orleans Bowl

BOONE — The Sun Belt Champions are headed back to the Big Easy.