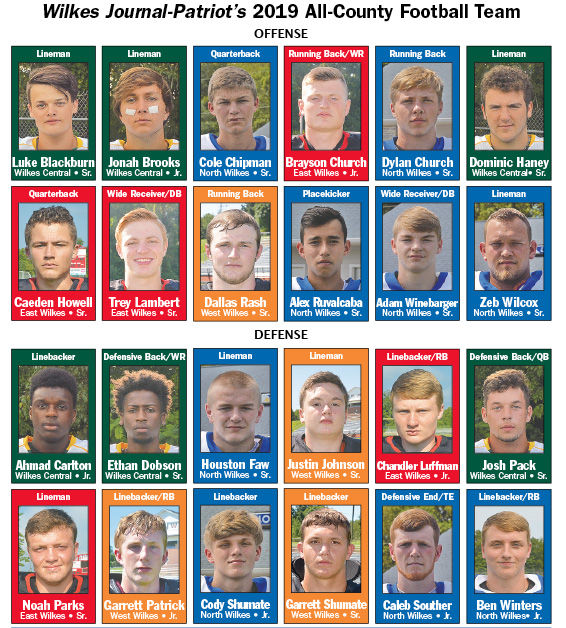 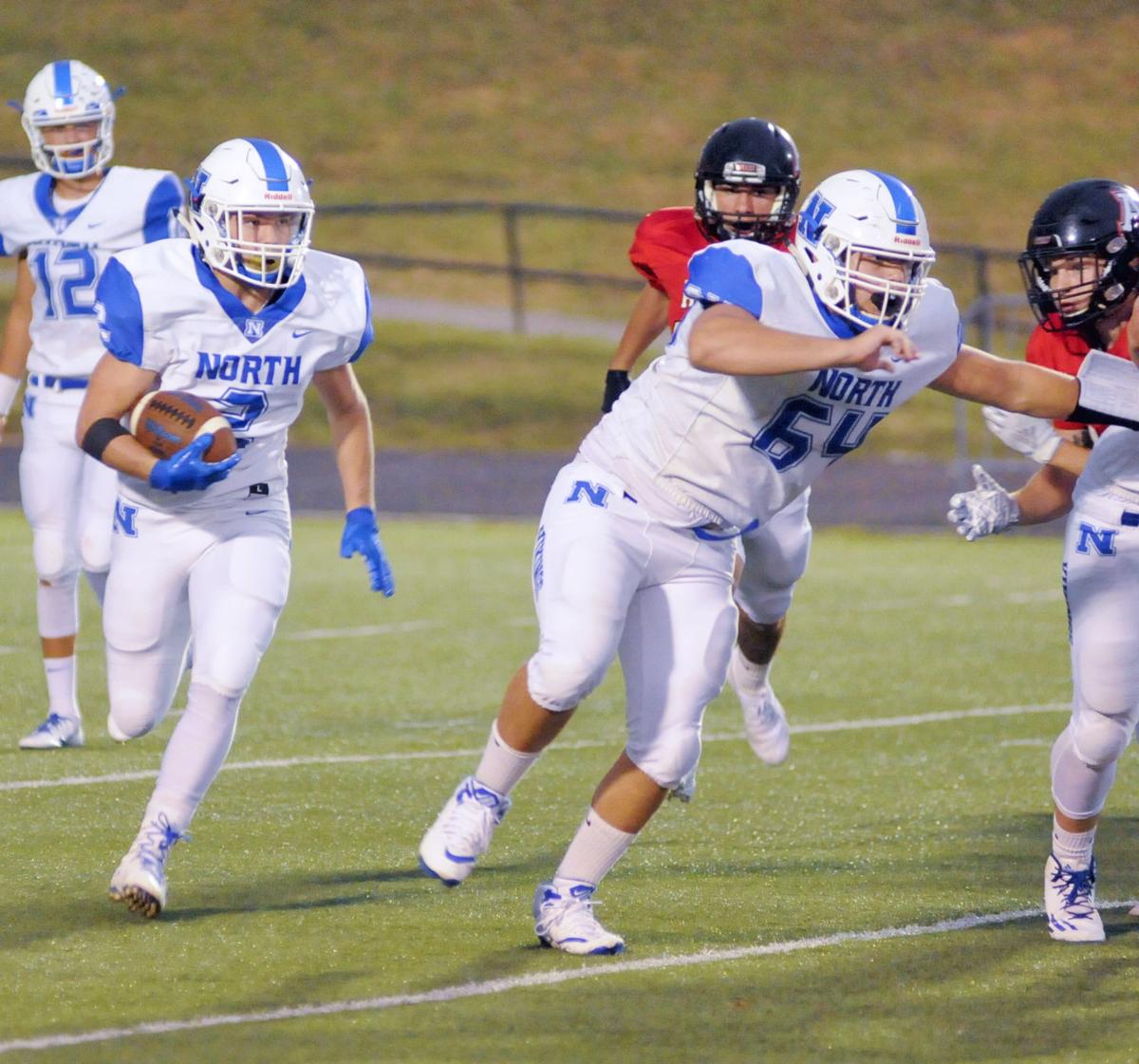 Cole Edwards, of North Wilkes, was an all-MVAC selection on offense and defense in 2019. He is pictured here paving the way for Viking teammate Dylan Church against AVery County. 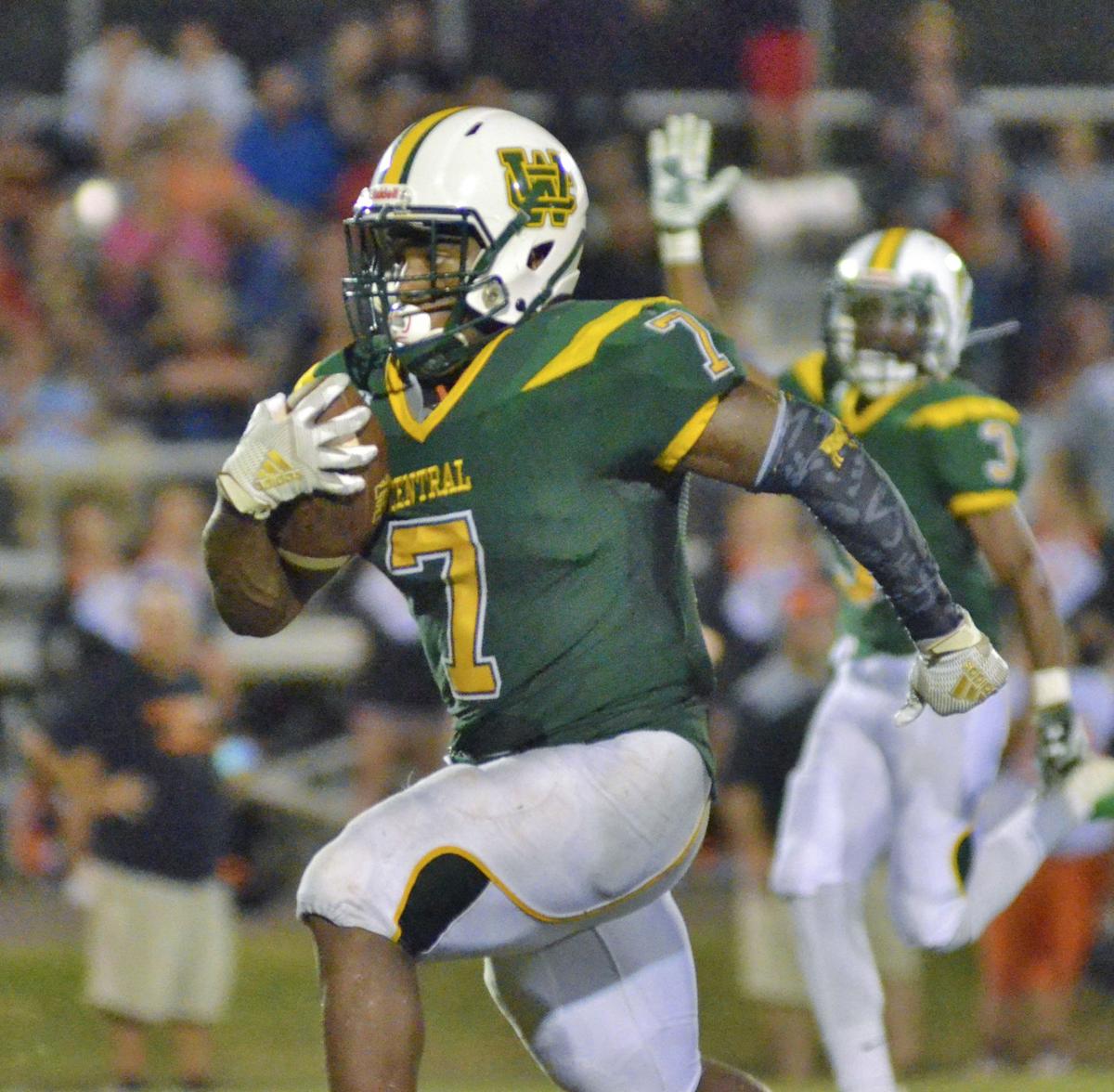 Wilkes Central’s JoRaye Morrison runs for one of his 24 touchdowns on the ground. JoRaye rushed for more than 2,400 yards this fall. 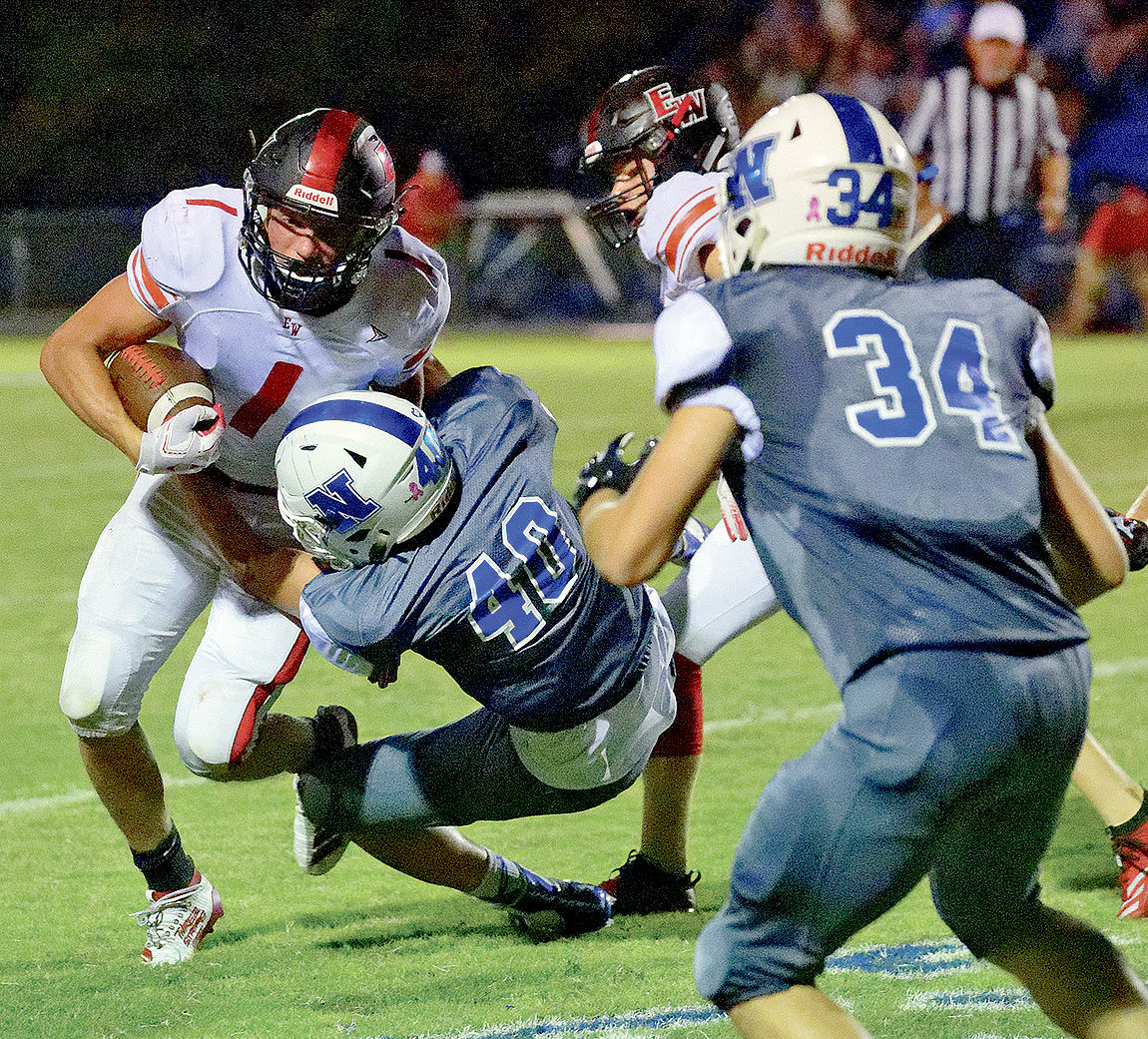 EAST WILKES’ Garrett Vernon tries to pull away from a tackle attempt from North Wilkes’ Kaleb Buck as Michael Bell closes to help during a game this past season.

Cole Edwards, of North Wilkes, was an all-MVAC selection on offense and defense in 2019. He is pictured here paving the way for Viking teammate Dylan Church against AVery County.

Wilkes Central’s JoRaye Morrison runs for one of his 24 touchdowns on the ground. JoRaye rushed for more than 2,400 yards this fall.

EAST WILKES’ Garrett Vernon tries to pull away from a tackle attempt from North Wilkes’ Kaleb Buck as Michael Bell closes to help during a game this past season.

Picking the top players for the Wilkes-Journal-Patriot all-county football team is never an easy task.

And this past season was no exception.

All three of Wilkes County‘s top players were instrumental in helping their respective teams find success this fall and making the North Carolina High School Athletic Association playoffs. Three teams made the postseason this fall after just one team (East Wilkes) qualified in 2018.

Taking the torch from former North Wilkes lineman Jacob Combs, Cole Edwards was tasked with carrying on what the current Western Carolina lineman had done.

Edwards was one of two county players to earn All-Mountain Valley Athletic Conference honors on both offense and defense. For his efforts, the senior was named the county’s Defensive Player of the Year.

Edwards, who former Head Coach Monty Chipman said, “was our leader on a defense that helped us win seven games,” finished the season with 86 tackles and included 10 for a loss. The senior also finished with six sacks.

As an offensive lineman, Edwards helped pave the way for more than 4,000 yards of total offense.

“Cole was our best lineman on both sides of the ball and was our strongest kid and team leader — hard-working kid who just loves football,” said Chipman. “He was one of our smartest kids who set our strengths on defense. We put him at the opposing teams point of attack every week and other teams ran away from where we put him.”

Wilkes Central’s JoRaye Morrison and East Wilkes’ Garrett Vernon had two different styles in compiling their stats on offense, but they were certainly effective.

Morrison, who was named the Wilkes Journal-Patriot’s Offensive Player of the Year, rushed for a county-best 2,409 yards and 24 touchdowns while averaging just over nine yards a carry.

Morrison, who was also the MVAC’s Offensive Player of the Year, also had three touchdown catches and threw for a touchdown.

“JoRaye’s a great kid who is extremely talented. He had an incredible year, dominating games even though every defense was designed to stop him,” said Wilkes Central Head Coach Ron Turner.

A year after playing behind former teammate Jayveon Ross, last year’s county player of the year on offense, Vernon made the most of his opportunity to shine this fall.

For his efforts, Vernon earned the Wilkes Journal-Patriot’s Ironman of the Year award.

In order to earn the Wilkes Journal-Patriot’s Iron Man Award, a high level of play has to be maintained on both sides of the ball.

Vernon’s versatility on offense was highlighted as he accounted for 29 touchdowns this fall and 174 points scored.

Vernon also hauled in a county-best 31 passes for 900 yards and 10 more touchdowns while earning All-MVAC honors on offense. He also returned a kick for a touchdown.

The senior was also key member of the Cardinals’ defense where he compiled more than 50 tackles. He had a season-high 11 tackles in a win against West Wilkes and registered eight against MVAC co-champion Elkin.

“Garrett was the most dynamic player in the conference by far,” said East Wilkes Head Coach Jonathan Wilmoth. “He can line up at wide receiver and beat you and then he can go to the backfield and carry the ball and beat you as well.”

There were 27 first-team selections (counting the three player of the year winners), which were nominated by their respective teams’ head coaches, on this year’s all-county team.

Overall, there were 32 nominations with the remaining five players being named honorable mention.

Of the 27 selections, 14 of them were all-conference first-team selections (and two of them were named All-MVAC on both sides of the football) and nine others were selected as All-MVAC honorable mention.

Here’s a breakdown of the first team:

Caeden Howell was the maestro of the Cardinals offense this fall and turned in a strong performance during his second season under center.

The senior passed for a county-best 2,085 yards and 19 touchdowns with a yard per attempt average of 9.65 yards. He also added 112 carries for 450 yards and five touchdowns.

Like Vernon, Brayson Church proved to be a dual threat at both running back and receiver.

The junior rushed for 803 yards and five touchdowns on 150 attempts; he also added 15 catches for 215 yards and two touchdowns.

Trey Lambert was one of the Cardinals’ top threats through the air on both sides of the ball.

On offense, the senior caught 29 passes for 503 yards and five touchdowns. On defense, he picked off three passes and had eight pass breakups to go along with a fumble recovery and 22 tackles.

Lambert, Howell and Church were all-MVAC selections on offense.

Noah Parks was an all-MVAC selection on both offense and defense. On offense, he helped pave the way for more than 4,000 yards. At defensive end, the senior finished with 68 tackles (37 solo) and three sacks.

Dylan Church rushed for 2,029 yards on 352 carries and 23 yards. His season included five games of 200 yards or more (and nine games of 100 yards or more). Church’s season rushing totals are second all-time in school history, behind only 2018 graduate Jarrett Grimes.

In addition to being named to the All-MVAC team, the senior caught 17 passes for 63 yards and two more touchdowns.

When it wasn’t Church on the ground, Cole Chipman was taking care of business through the air.

Chipman, who recently committed to play baseball for Surry Community College, earned all-MVAC recognition after passing for 1,322 yards and 16 touchdowns while compiling a 55 percent completion rate.

Adam Winebarger was Chipman’s favorite target as he caught 28 receptions for 554 yards and eight touchdowns. He also rushed 17 times for 118 yards and a touchdown.

While Winebarger was an honorable mention on offense, he was an all-MVAC selection on defense thanks to his five interceptions. Winebarger, who Monty Chipman said, “covered the other teams best wide receiver all the time” return two of those picks for touchdowns.

In addition to the work from Edwards, Zeb Wilcox also played a solid role on the Vikings offensive line as he helped pave the way for both a 2,000-yard rusher and a 1,000-plus yard passer.

Senior Alex Ruvalcaba was an all-MVAC selection at placekicker as he was a perfect 43-for-43 on extra points. He was also a perfect a 2-for-2 on field goals, including the game-winner at Starmount.

Cody Shumate was a vital member of the Vikings defense as he led his team in tackles with 104. The junior all-MVAC selection had 10 tackles for a loss and four sacks.

Ben Winters turned in productive seasons on both sides of the ball. The junior was second to Church in rushing with 590 yards on 98 carries with eight touchdowns.

Winters was an all-MVAC honorable mention selection on defense after piling up 101 tackles.

Caleb Souther was also a very effective two-way player for the Vikings. The junior was an all-MVAC selection on defense as a defensive end.

Souther was also a versatile tight end on offense who was called upon to help open up running lanes. He also caught 19 passes for 187 yards and three touchdowns.

Houston Faw lined up beside Edwards on the defensive line at nose guard and collected 78 tackles, including eight for a loss, with four sacks.

Despite not having any all-MVAC first team selections, the Blackhawks had plenty of solid contributors this fall.

Garrett Patrick and Justin Johnson — a pair of all-MVAC honorable mention selections — were integral members of the Blackhawks’ defense.

Garrett Shumate finished just behind Patrick in tackles with 87, including 49 solo.

Seniors Luke Blackburn and Dominic Haney and junior Jonah Brooks, helped pave the way for Morrison on the ground and helped the Eagles compile more than 3,900 yards of offense this fall. All three players earned all-MVAC honorable mention on both offense and defense.

Brooks, who Turner called “our team’s most versatile lineman,” graded out at 86 percent despite missing five games due to injury and finished with eight pancake blocks.

Josh Pack earned all-conference honors on each side of the ball (including a first-team honor on defense) as a defensive back and at quarterback.

But Pack’s best work came on defense where he collected 54 tackles to go along with an interception, which helped the Eagles cement a senior night win over Starmount, and four pass break ups.

Offensively, the senior added 14 touchdowns (seven on the ground and seven through the air). Pack passed for 725 yards on 44 attempts and added 716 rushing yards.

Like Pack, Ethan Dobson was another Eagle who contributed on both defense and offense. On defense, where he was an all-MVAC honorable mention, the senior picked off four passes and added 36 tackles.

Dobson also caught 10 passes on offense for 225 yards and three touchdowns, which included the game-winner in the season opener at North Iredell.

Ahmad Carlton also earned all-MVAC honorable mention recognition on both sides of the ball but his best work came on defense where he registered 55 tackles, including two for a loss. He also added three pass breakups.

The senior was also the Blackhawks’ quarterback as he completed 43 passes for 665 yards and six touchdowns. On the ground, he added 221 yards and touchdowns on 83 attempts.

Junior Seth Culler finished with 70 tackles (29 solo) and two interceptions as West’s outside linebacker. At running back, Culler added 350 yards and three touchdowns on 78 carries.

Wilkes Central’s Alex Nichols was the Eagles’ top receiver as the senior hauled in 14 passes for a team-best 281 yards and two touchdowns.

North Wilkes’ Michael Bell finished with 20 receptions for 299 yards and three touchdowns. He also fielded punts and kick returns with a kick return going for a score.

Partly cloudy in the morning followed by scattered thunderstorms in the afternoon. High 88F. Winds light and variable. Chance of rain 40%.