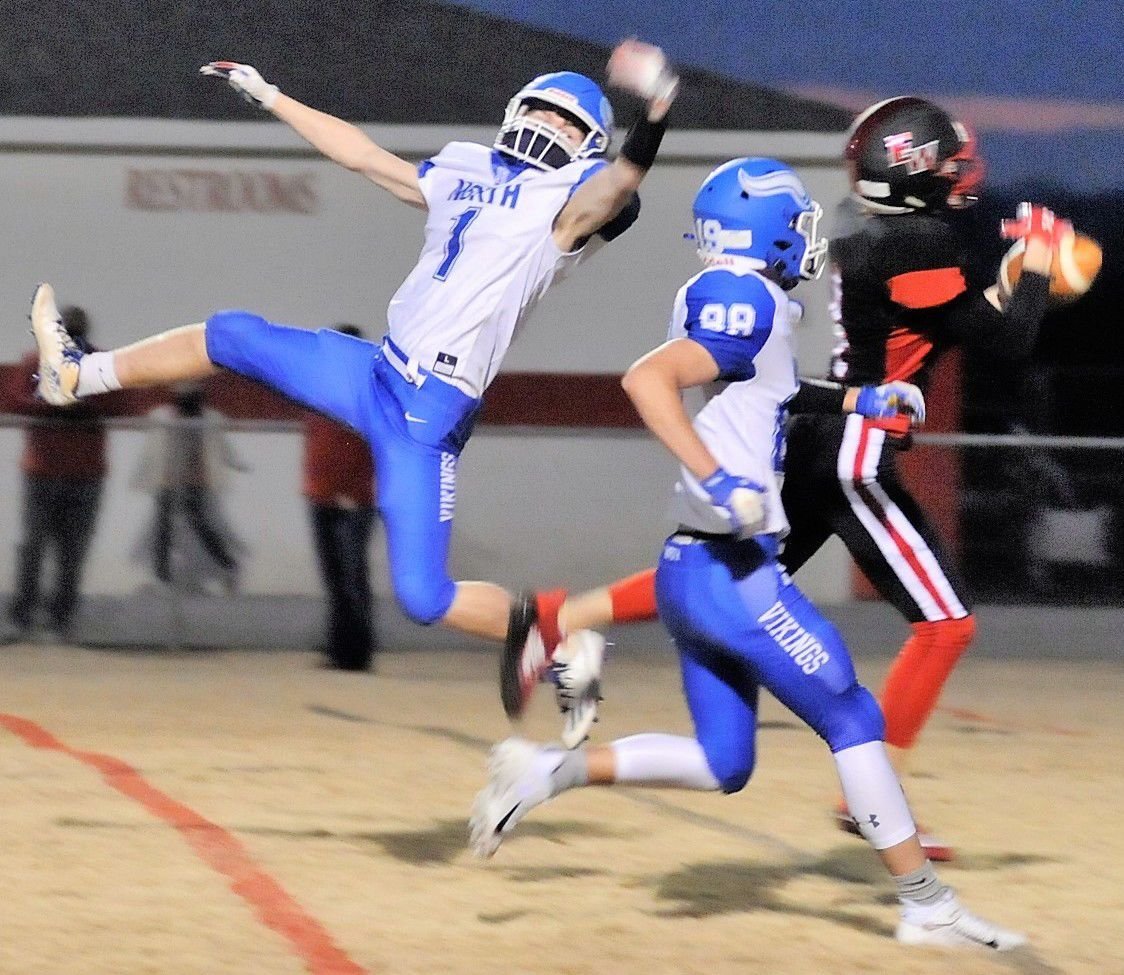 East Wilkes’s Bryson Sidden hauls in a 47-yard touchdown pass from Briggs Gentry on East’s opening drive Thursday in Ronda, as North Wilkes’ Tristen Walker (1) leaps but can’t break up the pass. The Cardinals shut out the Vikings, 13-0. 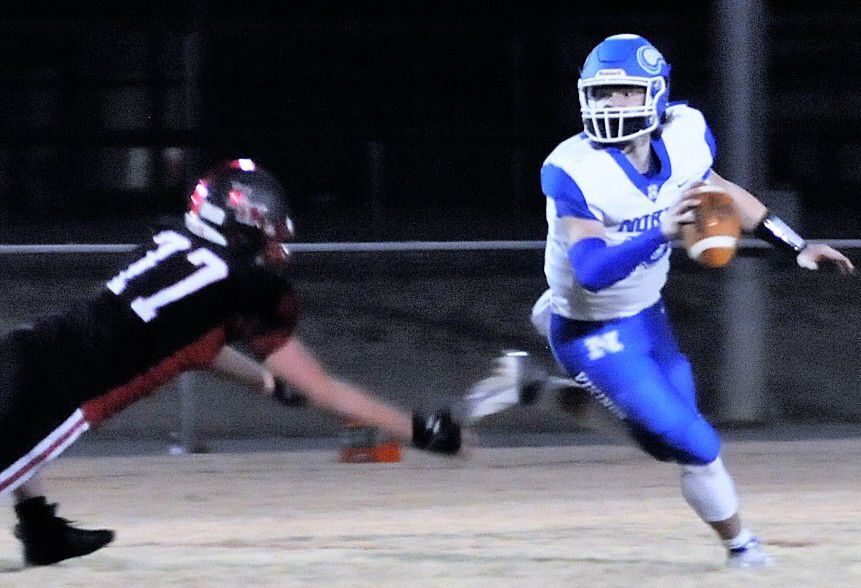 East Wilkes’s Bryson Sidden hauls in a 47-yard touchdown pass from Briggs Gentry on East’s opening drive Thursday in Ronda, as North Wilkes’ Tristen Walker (1) leaps but can’t break up the pass. The Cardinals shut out the Vikings, 13-0.

In the end, East Wilkes earned a hard-fought 13-0 victory over rival North Wilkes in the Mountain Valley Athletic Conference opener thanks to one big play in each half, plays strikingly similar in execution and outcome.

The game, moved up from Friday due to the threat of rain in the area, was the first action of the season for both teams, without the usual scrimmages to iron out preseason kinks.

But East Coach Jonathan Wilmoth was simply glad to be back on the field.

“It was a little surreal at kickoff,” smiled Wilmoth, whose team now stands at 1-0. “We’ve been working since July 6th knowing that the carpet could be pulled out from under us at any moment, so to actually get out there and mix it up with another team…it was a lot of fun for us all.”

The aerial combination of East sophomore quarterback Briggs Gentry to senior receiver teammate Bryson Sidden accounted for both of the evening’s touchdowns, two plays that totaled 117 yards, or over half of East’s total offensive yardage for the game.

Gentry first found Sidden at the 6:16 mark of the opening quarter on the Cardinals’ initial drive. Gentry threw a strike to Sidden, who was wedged between Tristen Walker and Will Harrold, two North defenders. The coverage was sound but the pass was better, and Sidden collected the throw on the post route for the early 7-0 lead.

“That was just a good catch. The coverage wasn’t bad,” said Viking Coach David Wojtecki, in his first season on the sidelines at North (0-1). “Tristen almost picked that one off, but just mistimed his jump.”

The backbreaker came in the third quarter, however. An errant first-down snap pinned the Cardinals back at their own 30, facing 2nd-and-35. Instead of playing cautiously, Wilmoth again called for the deep route to Sidden.

Gentry delivered a perfect arching rainbow down the center of the field, a pass that hit Sidden in stride 40 yards past the line of scrimmage. Sidden never slowed down, and raced the rest of the way for the 70-yard bomb (an ensuing extra-point attempt was blocked by the Vikings’ special teams).

“It was just one of our base plays, something we’ve worked on since July and something we feel comfortable doing at any time,” said Wilmoth.

“Honestly, because we’ve really only had all our guys out for four or five practices this spring, we were limited in what we wanted to run. But we had confidence in our guys executing that route,” added Wilmoth.

“We gave him a little too much space on the second one,” said Wojtecki. “We had a little confusion in the back, and they made us pay.”

North Wilkes did have a couple of chances in the second quarter to tie things up, and possibly change the game’s momentum, with two ill-fated opportunities in the red zone.

First, on second down at the East 11, North quarterback Zach Wyatt tried to find his target, Seth Hall, in the end zone. But Sidden, now playing corner, undercut the throw for the pick, setting up his offense at the 7.

The ensuing drive was short, however, as Gentry fumbled on a run up the gut on the very next play. Hall recovered that miscue, and the Vikings were back in business.

But three plays later a bad hand-off between Wyatt and running back Ben Winters landed on the turf, and East defensive lineman Damian Spiva pounced on it. North Wilkes didn’t make it back to the red zone the rest of the night.

“We had a nice drive going initially,” said Wojtecki. “It seemed like that one mistake sort of triggered everything that happened in the game afterward. That’s the way it is sometimes — one or two mistakes snowball into situations that prove too much to overcome.”

Spiva’s name was called frequently Thursday, as the senior made play after play. His effort anchoring the Cardinals’ defensive front helped hold North Wilkes to only 23 yards rushing total.

“Damian had a great off-season,” said Wilmoth. “He worked hard, and I was tickled to see how well he played tonight. We start Damian, a junior and two sophomores up there, so he’s the old head and we needed him to be active tonight.”

North’s defense played well, too, anchored by their front seven, according to Wojtecki.

“Our front and our inside backers especially sort of held us together out there. We had a couple of alignment things to work on in the back end, but there were several times those kids up front saved us with their pressure and tackling.”

Gentry finished the evening with 178 yards passing, 141 of which went to Sidden. Wyatt tallied 87 yards through the air for the Vikings, hitting Caleb Souther and Chris Kimmel for 44 and 42 yards, respectively.

“Zach had some good moments out there,” said Wojtecki, “and I got to see a little bit of some of the things he’s comfortable doing on the field. He’s learning a new system, and I’m learning what he can do as a football player, and I think he’s only going to get better.”

North Wilkes heads back out on the road this week, facing another county rival in Wilkes Central Friday night in Moravian Falls. The Cardinals, meanwhile, will next face West Wilkes in Millers Creek.

Brody Martin had 84 yards on the ground for East, and averaged 4.4 yards per carry, but team rushing totals were adversely affected by several bad snaps. “We need to clean those up, and we need to clean up the penalties,” said Wilmoth, whose team was flagged eight times for 65 yards…Winters had 33 yards rushing to lead the Vikings…Titus Miller also recorded an interception for the Cardinals.