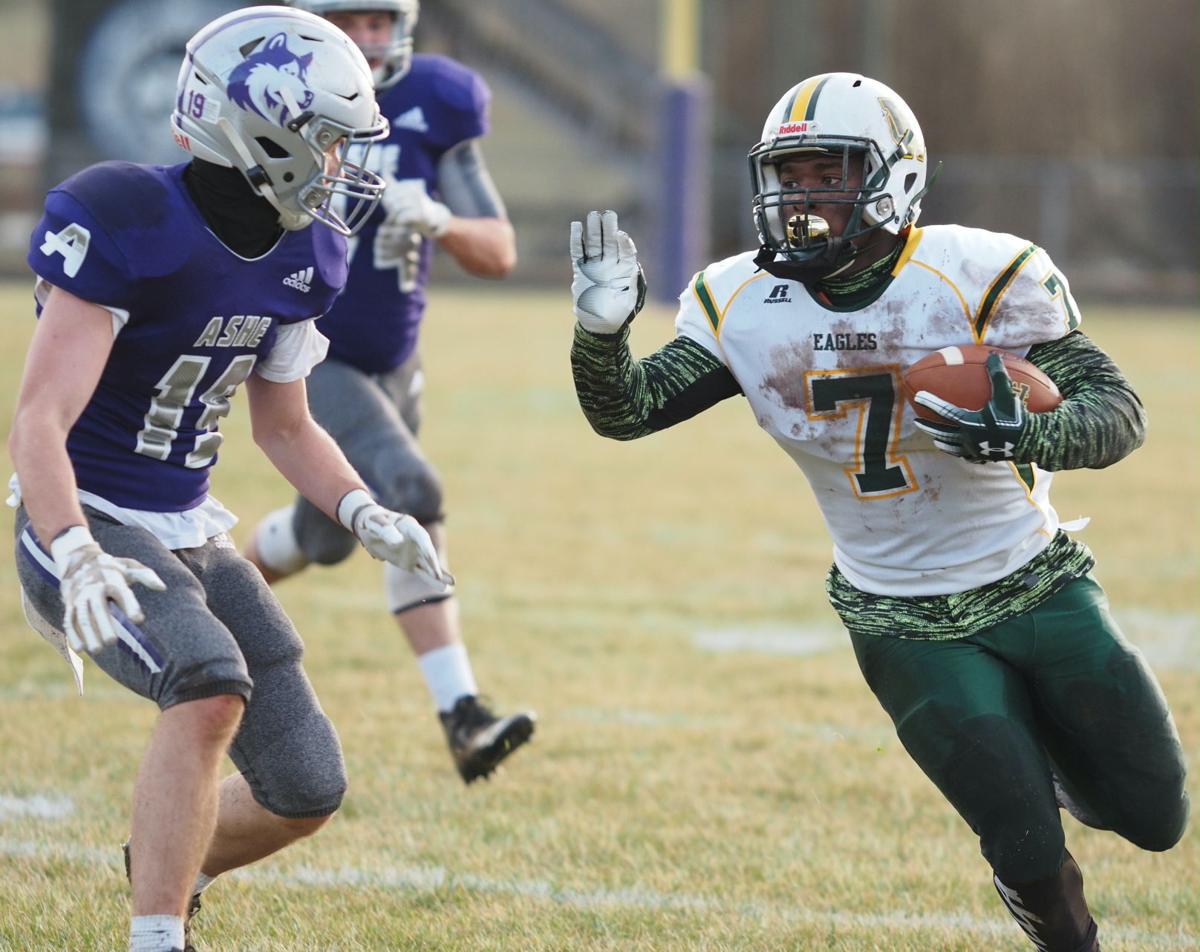 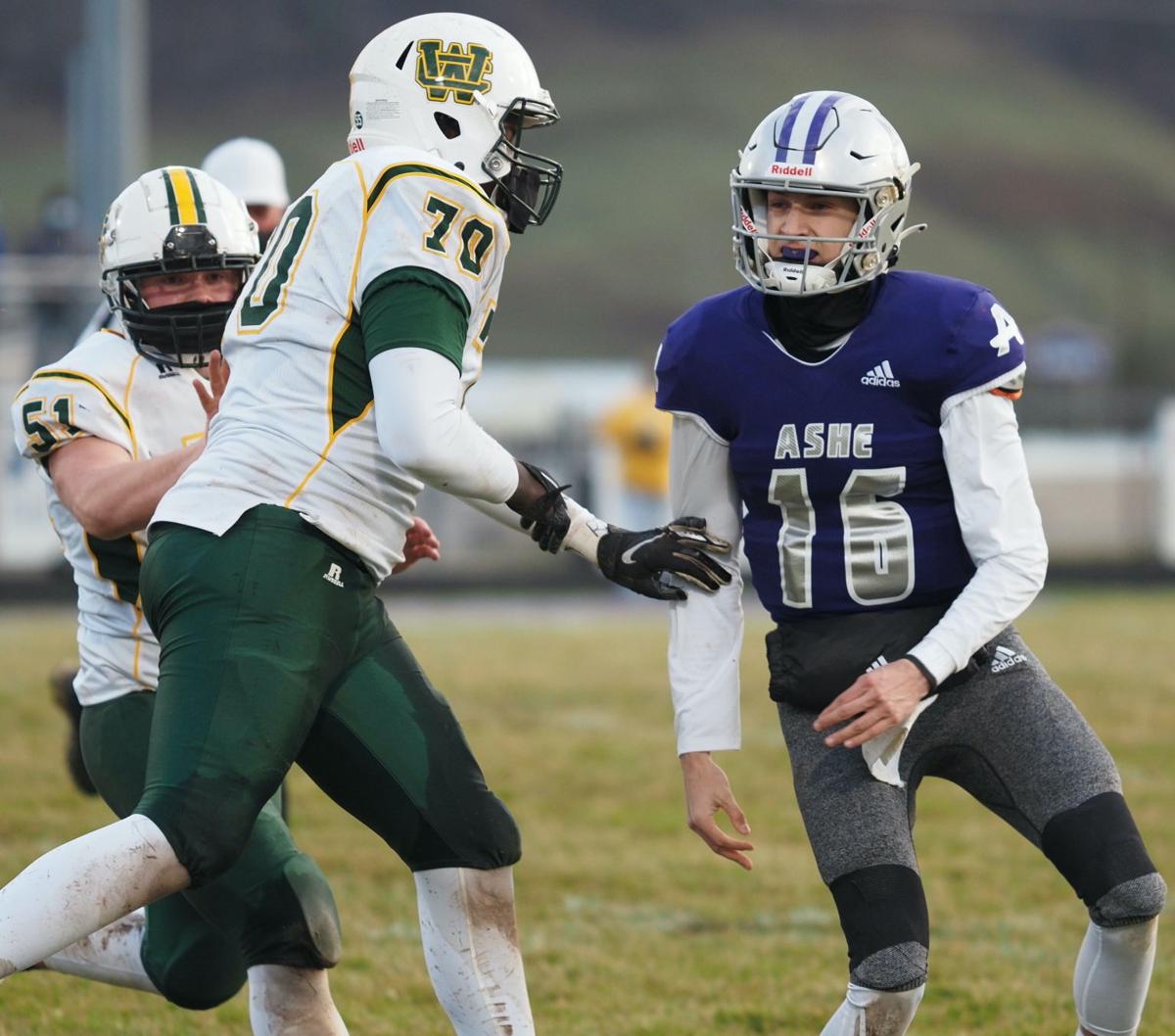 Ashe County quarterback Dawson Cox, who threw for four scores and ran for two others on Friday, releases a pass just before being met by Wilkes Central pass rushers that included Mathew Bell (51).

Ashe County quarterback Dawson Cox, who threw for four scores and ran for two others on Friday, releases a pass just before being met by Wilkes Central pass rushers that included Mathew Bell (51).

The East Wilkes varsity football team dominated the middle quarters of a 35-0 shutout of Alleghany in Sparta on Friday, a Mountain Valley 1A/2A Athletic Conference win that kept the Cardinals in playoff contention.

The Cardinals are 2-2 and are a game back of 3-1 Elkin in the race for the MVAC’s lone playoff berth with three games remaining.

East erupted for 21 points in the second quarter, on a rushing touchdown by Brody Martin, a passing score by Briggs Gentry and a pick-six by Ethan Cass.

All three players are sophomores.

In the third quarter, East got another passing touchdown by Gentry and then, after recovering a Trojan fumble at the 18-yard line, Martin added a 7-yard rushing score and senior Jorge Lopez made his fifth point-after kick to complete the scoring.

“I thought our guys played hard,” said East’s coach, Jonathan Wilmoth. “We are just trying to get a little better every game right now. Offensively, we finally sustained some drives and was consistent in scoring inside the 20-yard line.”

Martin carried 23 times for 131 yards and two touchdowns as the Cardinals posted their fifth win in the past six seasons over the Trojans.

Gentry completed 10-of-17 passes for 105 yards with scoring strikes to Cass and senior Bryson Sidden, and he also rushed for 42 yards. Cass caught four balls for 55 yards, both team highs.

“Our defense has played tough all year,” said Wilmoth after his club posted its second shutout of the season. “I’m super proud of their efforts. It was a point of emphasis going into the season and our players and defensive staff have stepped up to the challenge.”

re paced by senior Riley Pruitt’s 102 yards on 15 carries, will be the homecoming opponent of Wilkes Central (2-2) on Friday.

The Huskies (4-0) struck three times in the first quarter and never looked back in posting their third-straight win over the Eagles (2-0). Ashe has averaged almost 49 points in those three MVAC games.

On its first possession, Ashe engineered a 65-yard scoring drive that started with a 20-yard run by Timothy Peterson.

After converting on fourth-and-6 from the 22 with a 10-yard completion to Keenan Witherspoon, Cox threw a 12-yard touchdown pass down the right flank to Matthew Peterson.

After Peterson’s point-after kick, the hosts led 7-0 with 8:25 left in the first.

Quarterback Anthony Graham was sacked by Jaron Greer on Central’s first possession and limped off the soggy field, replaced on the next snap by C.J. McGill.

An Eagle punt was then downed at the Ashe 16-yard line with 6:32 remaining in the opening period.

Ashe then needed only two plays to go 84 yards.

Following a 35-yard run by Matthew Peterson, Cox completed a 49-yard touchdown pass to Keenan Witherspoon, who was wide open down the left sideline.

After the Eagles moved the ball to the Ashe 20-yard line, an errant snap to McGill was recovered by Witherspoon at the Ashe 38-yard line.

On the next play, Cox delivered a perfectly-lofted long ball down the middle of the field to Austin Poe.

The 62-yard touchdown and Peterson’s PAT made it 21-0 with 32.8 seconds left in thefirst period.

After a fumbled exchange on third down, a bad fourth-down snap while in punt formation was recovered by Poe at the Central 30-yar line.

But the Huskies weren’t able to capitalize, as Cox was intercepted by Central’s Corbin Call at the 5-yard line.

Following a turnover on downs by Ashe and a Cesar Martinez interception of a McGill pass, the first half ended at 21-0.

On Ashe’s first possession of the second half — following another bad snap and shanked punt by the Eagles — Cox capped a 24-yard drive with a 5-yard quarterback keeper. The point-after kick was short, keeping it 27-0 with eight minutes left in the third.

The Eagles got on the board with 1:41 remaining in the third.

Malachi Rucker lined up wide left and ran a slant to the middle of the field, and McGill delivered the ball in stride for an 18-yard touchdown pass.

McGill was then stopped short on a two-point keeper attempt.

Ashe hit paydirt again with 10:37 left in the game, as Cox connected once more with Poe for a 32-yard scoring pass. Timothy Peterson’s PAT made it 34-6.

Cox found the end zone on a 1-yard with 4:20 remaining in the fourth period.

The Eagles will host Alleghany (1-3) for homecoming on Friday night. Ashe will be the homecoming opponent of East Wilkes (2-2) on Friday.

Elkin moved into second place in the MVAC with a 47-7 win over visiting North Wilkes on Monday night.

The Buckin’ Elks improved to 3-1 with their third-straight win in the series, while the Vikings (0-4) are still looking for their first win under Coach David Wojtecki.

Brett Beaver opened the scoring with a 35-yard run with 4:36 left in the first quarter. Thomas McComb’s point-after kick made it 7-0.

Jaxon Godbey threw a 5-yard touchdown pass to Ty Parsons with 1:06 remaining in the first, and after the McComb PAT it was 14-0.

The Godbey-to-Parsons connection struck again—this time for 29 yards—at 11:12 before halftime. McComb’s PAT stretched the lead to 21-0.

Godbey scored on a 5-yard option keeper with 4:32 left in the second.

North fumbled the ensuing kickoff and McKendal Renegar scooped it up at the 20 and ran it into the end zone. A mishandled snap on the PAT attempt left it 34-0.

Beaver tacked on a 59-yard rushing score with 11:02 left in the third quarter. McComb’s kick was true, and the Elkin lead was 41-0.

A 13-yard right option keeper by Godbey made it 46-0 with 2:45 remaining in the third, and the PAT by McComb finished the scoring by the hosts.

On fourth-and-5 from the 12, North quarterback Zach Wyatt connected with senior Garrett Ratliff in the end zone with 7:58 remaining in the contest.

The Vikings declined a defensive holding penalty to uphold the touchdown.

The game was postponed from Friday due to soggy field conditions at Grissom Stadium.

West Wilkes dropped Starmount in overtime, 10-7, in Boonville, snapping a three-game losing streak to the Rams and spoiling the school’s homecoming on Friday evening.

After the teams exchanged touchdowns and extra-point kicks in the second quarter, Walker Brondos connected on a 20-yard field goal in sudden death to win it for the Blackhawks (2-2).

The victory was West’s second against Starmount (2-2) in the last 11 matchups. Prior to Friday, the Blackhawks’ last win was in 2016, a 37-14 decision in Boonville.