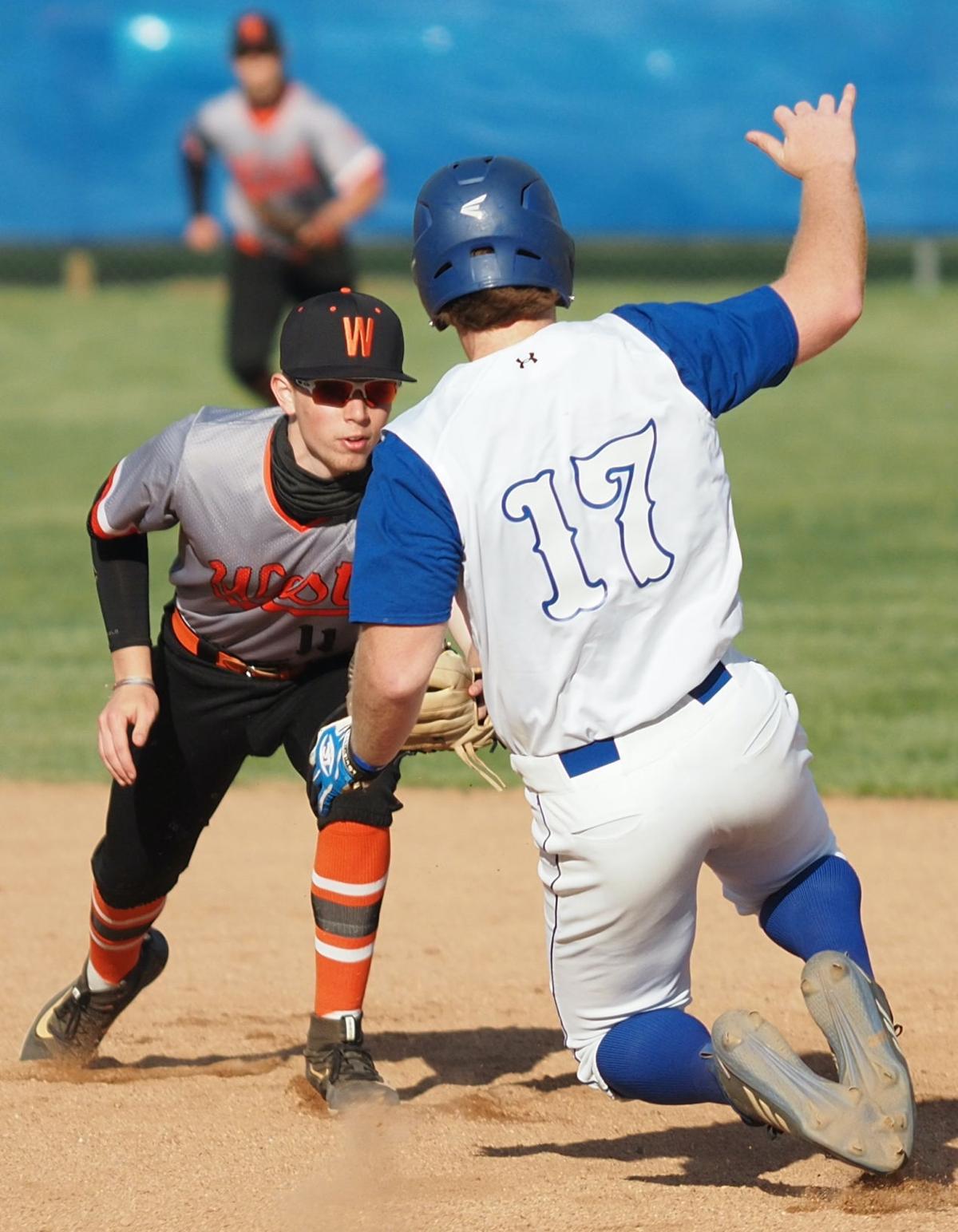 West Wilkes shortstop Izaac McGuire tags out North Wilkes’ Caleb Souther at second base to end the first inning in Hays on May 11. West catcher Braxton Church threw out Souther trying to steal. 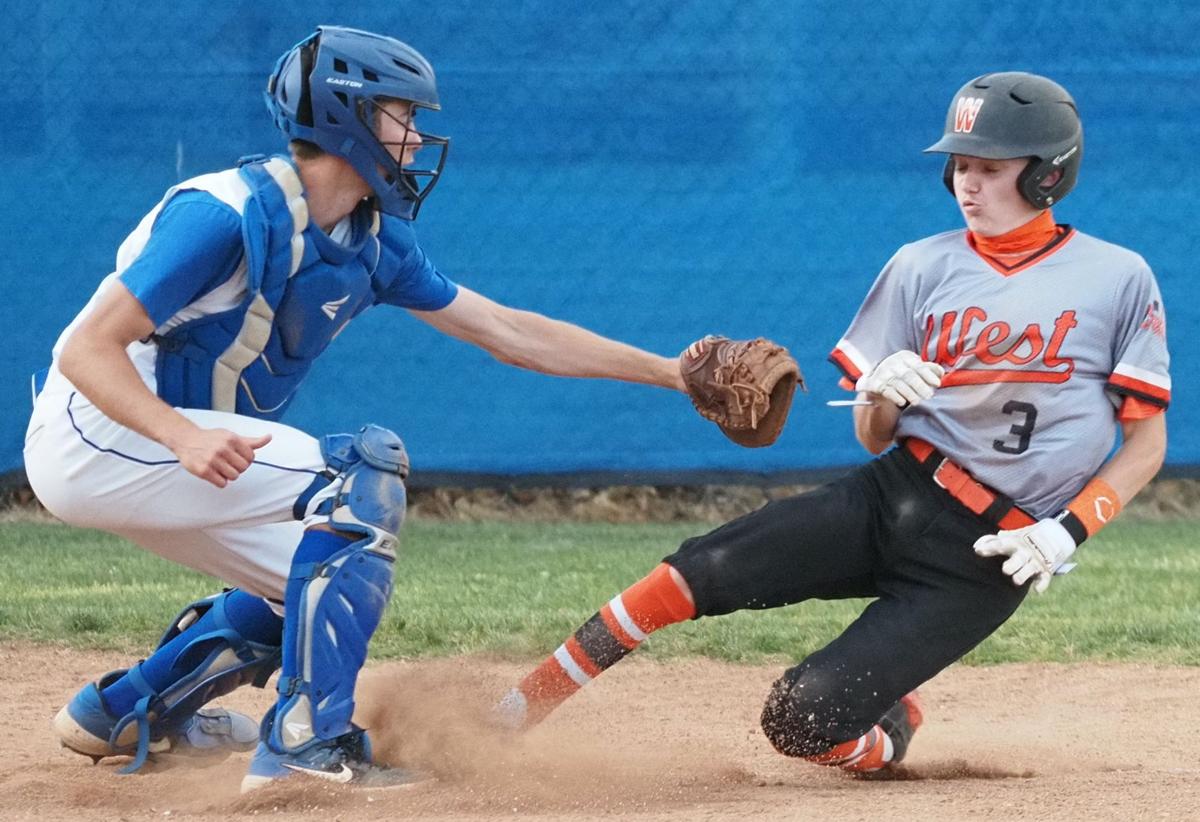 North Wilkes catcher Jesse Farrington tags out West Wilkes’ Grant Ferguson to end the second inning in Hays on May 11.

North Wilkes pitcher Dalton Miller throws to first base to record an out versus West Wilkes in Hays on May 11. 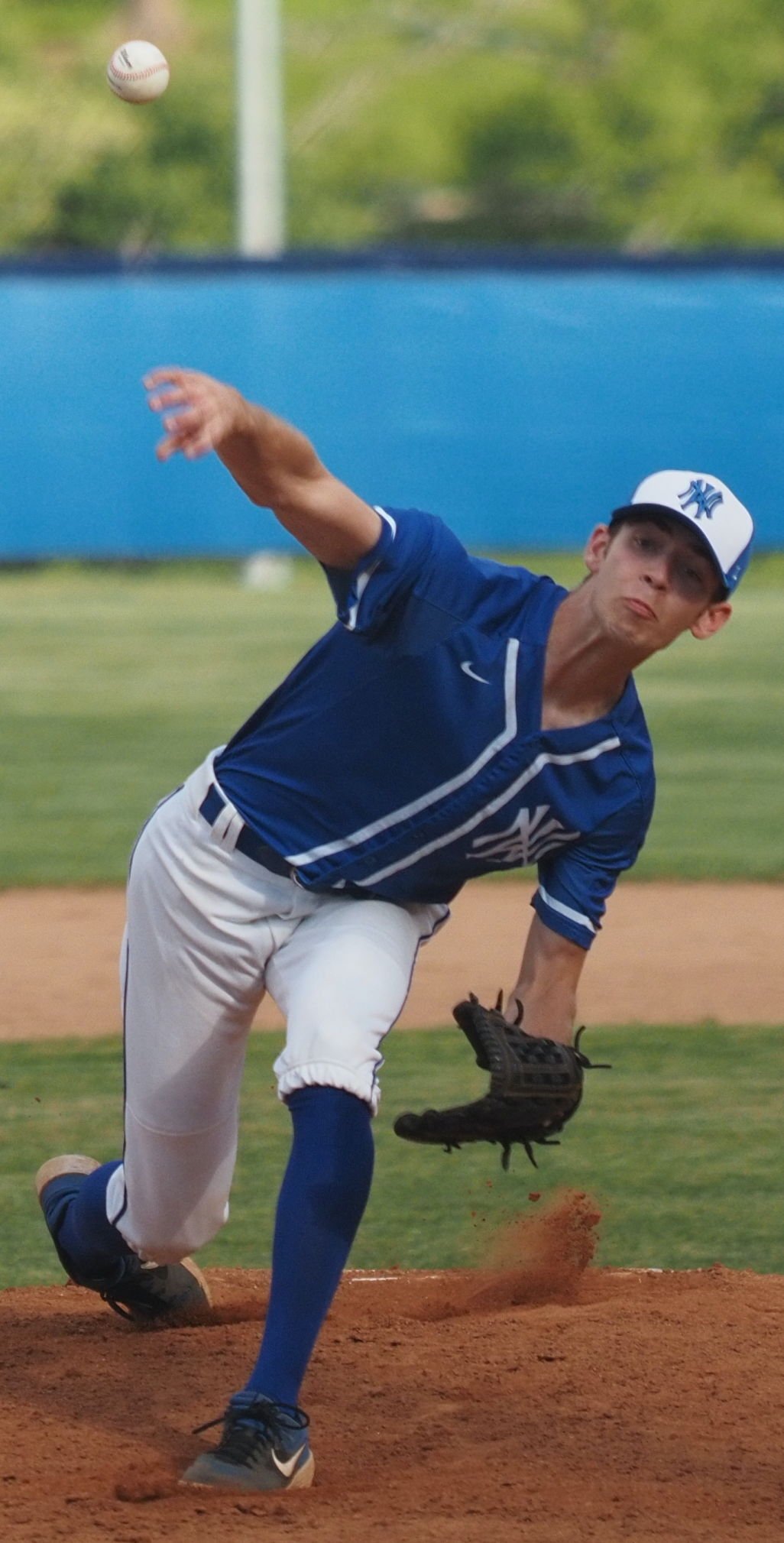 North Wilkes’ Jesse Farrington delivers a pitch to the plate in the first inning of the Vikings’ 12-1 loss to Starmount in Hays on Friday. Farrington struck out five in a losing cause.

West Wilkes shortstop Izaac McGuire tags out North Wilkes’ Caleb Souther at second base to end the first inning in Hays on May 11. West catcher Braxton Church threw out Souther trying to steal.

North Wilkes catcher Jesse Farrington tags out West Wilkes’ Grant Ferguson to end the second inning in Hays on May 11.

North Wilkes pitcher Dalton Miller throws to first base to record an out versus West Wilkes in Hays on May 11.

North Wilkes’ Jesse Farrington delivers a pitch to the plate in the first inning of the Vikings’ 12-1 loss to Starmount in Hays on Friday. Farrington struck out five in a losing cause.

The East Wilkes varsity baseball team jumped on Wilkes Central early and cruised to a 12-2 win Monday in Moravian Falls.

“It was a nice win for us,” said East Coach Justin Call. “It was a total team effort. We hope to continue to build on this performance and to continue to improve each day.”

“We did a better job at the plate with our approach and our guys did a good job of putting the ball in play,” noted Call.

Bryson Sidden earned his first win of the season for the Cardinals. “Our pitching did a phenomenal job,” added Call. “Bryson did a good job of throwing strikes and Hank Porter did a good job coming in and closing it out.”

East, in snapping a three-game losing skid to Central, improved to 2-4 while the Eagles slipped to 1-3.

West Wilkes kept its lock on first place in the MVAC with a 13-2 thrashing of Alleghany in Sparta on Friday.

The Blackhawks plated four runs in the third, fifth and seventh innings en route to bettered their record to 5-0. The Trojans are winless in five games.

“It was a great team win at Alleghany,” said Drew Ward, the Blackhawk coach. “It isn’t always the easiest place to play but our guys competed well. Our hitters made adjustments when pressed to do so.”

West senior Riley Ledford allowed no hits and struck out 11 of the 12 batters he faced while improving to 3-0 on the season. Trenton Walsh took the mound for the final three frames, allowing three hits and two earned runs while walking one and striking out five.

“Our arms, both Riley and Trenton, threw well and worked ahead in the count all night,” said Ward. “Several of our guys contributed off of the bench as well. It was a good win.”

In the third, West’s Braxton Church jacked a two-run homer to right, also scoring Grant Ferguson, who had reached on an error. Later, Evan Johnson’s two-out double to right plated Carson Edmiston, who had singled and stole two bases.

In the seventh, Izaac McGuire plated a run with a sacrifice fly and pinch hitter Bo Nichols laced a two-run double to center. Nichols later scored on a Trojan error.

Church, Mastin, Johnson and Nichols each had two RBIs for West while Church and Johnson each had two of the club’s 10 hits.

Wilkes Central picked up its first win of the season Friday, taking a 7-1 decision over Ashe County in West Jefferson.

The Eagles never looked back after scoring four runs in the second off Ashe starter Canyon Pennington.

Central senior Zach Mastin (1-0) earned the win on the mound after allowing three hits and an unearned run in 4 innings. He struck out six.

Jacob Demeny earned the save for the Eagles. He allowed three hits in 2 frames of scoreless relief, whiffing three.

The Eagles improved to 1-2 while the Huskies saw their mark even at 3-3.

Starmount posted a 12-1 win Friday over North Wilkes in Hays.

The Rams blew open the game with six runs in the fifth. Alex Armstrong stroked a two-run single in the frame and the visitors benefited from a three-run error by North catcher Dalton Miller.

Starmount scored three in the first on a Denver Stokes double, a Viking error and a fielder’s choice.

North responded with its lone run in the bottom of the frame. Seth Hall was hit by a pitch, advanced to second on a fielder’s choice and scored on Noah Royall’s line-drive double to center.

Starmount held off a furious Wilkes Central comeback in Boonville on Thursday, 11-9.

The Eagles, playing their first game after a 10-day quarantine, scored five runs in the top of the seventh before Ram reliever Denver Stokes shut the door.

“The difference in the game was errors on our part, which caused several unearned runs and was the difference in the score,” noted Central Coach Terry Johnson. “I’m proud of our guys for fighting through and giving us a chance at the end of the game.”

Alex Armstrong and Alex Williams each went 3-for-4 at the plate for the Rams. Jett Roberts drove in three runs.

Brody Johnson had three RBIs for the Eagles and Drew Call had two hits and two RBIs.

Sterlin Holbrook got the win on the mound. In four innings, he allowed four hits and three earned runs while walking three and striking out five.

Jacob Demeny (0-2) took the loss for the Eagles, whiffing four in five innings.

The Rams improved to 4-1 while the Eagles slipped to 0-2.

West’s Carson Edmiston and Evan Johnson combined on a one-hit shutout. Edmiston (1-0), a sophomore right-hander, allowed only one hit in six innings, walking one and striking out eight.

Johnson, a junior righty, walked and hit a batter in the seventh in closing out the game.

“We will take the win, especially against a scrappy and well-coached North Wilkes team, but we definitely have work to do,” said Drew Ward, the Blackhawk coach. “We thought we had our players prepared with a game plan of what to expect, but I will be going back to work as a coach to make sure we are better prepared moving forward.”

The Blackhawks never looked back after scoring four in the second inning. Trenton Mastin led off with a groundball single right up the middle and moved up after Riley Ledford was hit by a two-strike pitch from Viking starter Dalton Miller.

Evan Johnson then cracked a fly that was misjudged and overrun by North left fielder Gracen Cline, allowing Mastin and Ledford to score. Johnson raced all the way to third.

Collin McGuire followed with a triple to right center, plating Johnson for a 3-0 lead. He scored on Grant Ferguson’s infield single up the middle.

The damage could have been greater, but Ferguson—who hesitated while rounding third—was thrown out at the plate following Edmiston’s two-out single up the middle.

West (4-0) added two more runs in the fourth. McGuire led off with a walk and raced to third on Ferguson’s line-drive single to right.

Ben Huffman then delivered an RBI single to right just beyond the reach of first baseman Caleb Souther. Braxton Church’s sacrifice fly to center scored Ferguson for a 6-0 lead.

A.J. Roten, freshly inserted into the West lineup, bloop singled to right with one out in the seventh off North reliever Anthony Welborn, moved to third on Edmiston’s line-drive single to right and scored on Mastin’s liner to left.

The Vikings threatened in the bottom of the seventh, as Jesse Farrington was hit by a full-count pitch and advanced to second on a wild pitch. But he was thrown out at the plate by West shortstop Izaac McGuire, who redeemed himself after muffing Cline’s grounder.

Miller (1-1) took the loss for the Vikings (2-3) after allowing six hits and five earned runs in four innings. He walked two and struck out three. Welborn gave up three hits and an earned run in three frames of work, walking one and whiffing two.

“Both pitchers threw well for each team; we just happened to string some hits together when we needed to,” added Ward. “I was disappointed in our approach at the plate, but we will get back to work at practice.”

It was West’s fifth win in a row over the Vikings, three of which have been shutouts.

East Wilkes picked up its first win of the season at Alleghany on May 11.

“We played much better and cut down on errors,” noted East Coach Justin Call. “It was a good win and one we can look to build on as we prepare for our next game.”

East’s Tate Samples had a team-high four RBIs and Trenton Rhodes went 3-for-5 with a run-scoring triple in the second and scored four runs. Brody Martin was 2-for-2 and Arnder drove in two runs.

The Cardinal mound winner, Bryson Shore, “pitched extremely well and threw strikes,” according to Call, allowing seven hits and no runs in five innings of work. Trenton Rhodes pitched two frames of relief and “did a great job as well.”

Cloudy with occasional rain after midnight. Low near 65F. Winds light and variable. Chance of rain 60%. Rainfall around a quarter of an inch.