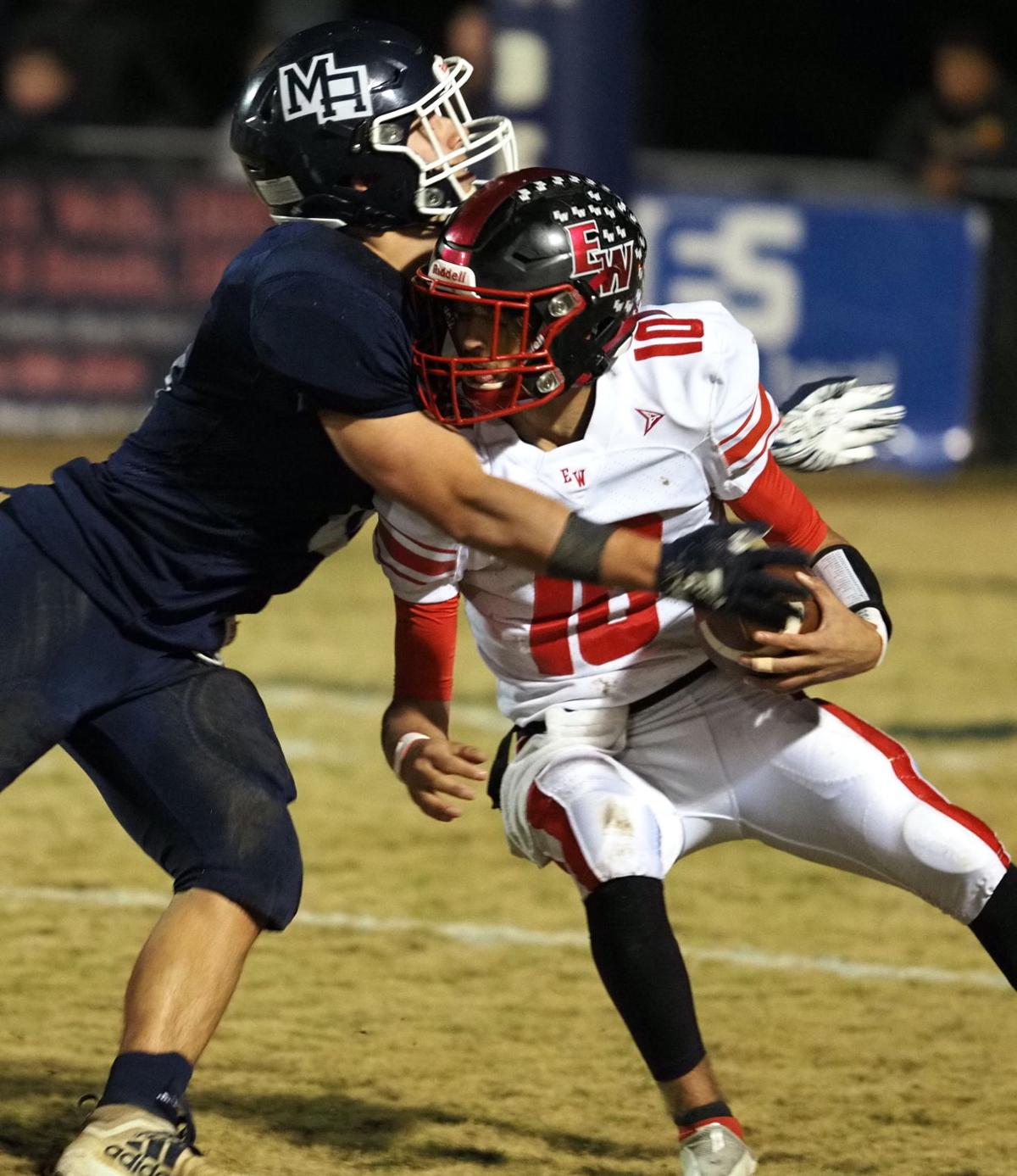 East Wilkes quarterback Briggs Gentry is met by Mount Airy’s Nic Isom as the junior scrambles upfield Friday night in the second round of the 1A state playoffs. 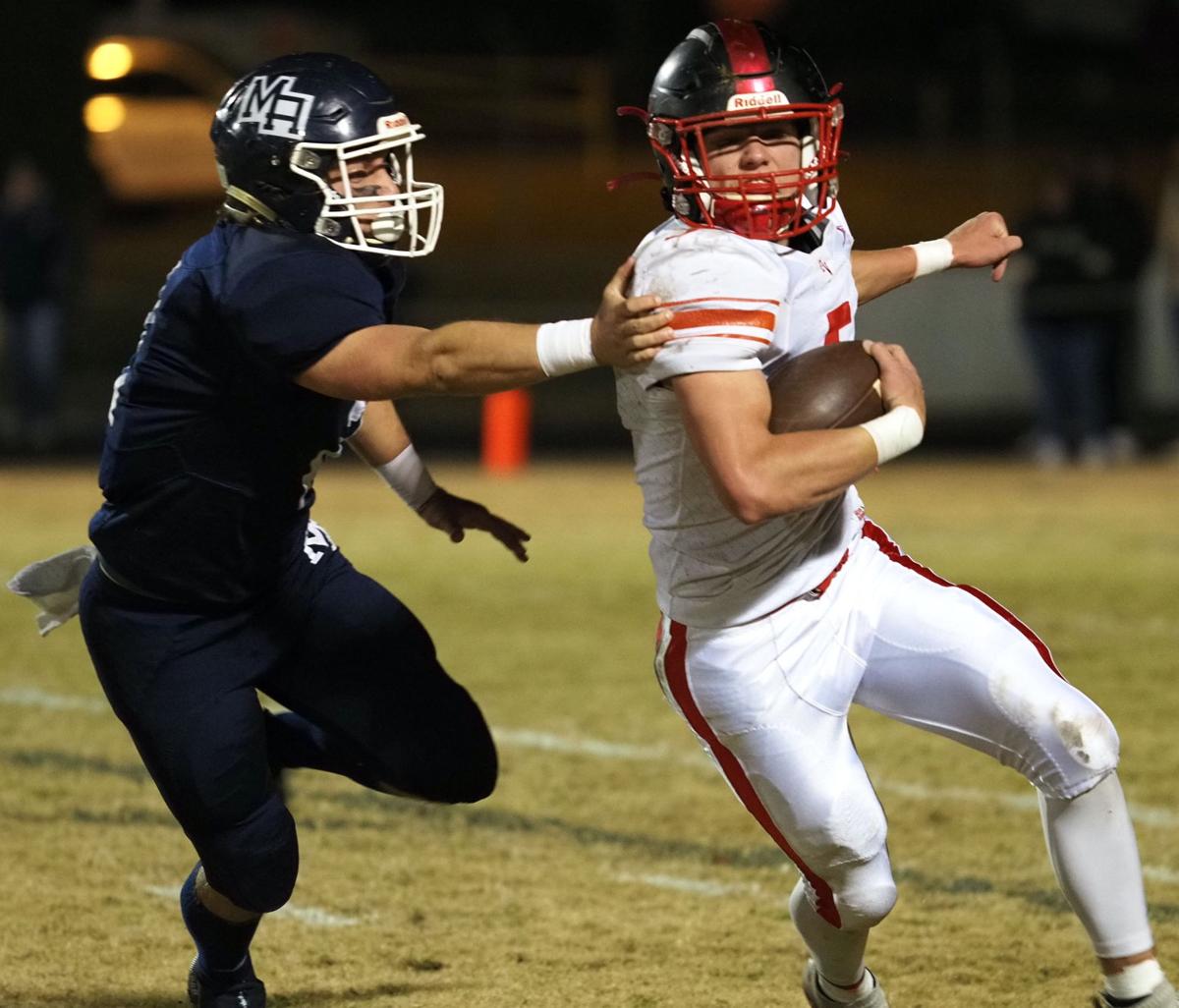 East Wilkes quarterback Briggs Gentry is met by Mount Airy’s Nic Isom as the junior scrambles upfield Friday night in the second round of the 1A state playoffs.

MOUNT AIRY — The Mount Airy football juggernaut steamrolled over another opponent Friday in the second round of the 1A state playoffs.

The undefeated Granite Bears met their toughest challenge of the season three weeks ago in Ronda—leading East Wilkes only 19-6 at halftime—but on Friday the Cardinals had no answers for the Bears, who roared to a 48-0 victory at Wallace Shelton Stadium.

East’s season ends at 5-7 while the 12-0 Bears will host another Northwest 1A foe, 8-4 Starmount, in Friday night’s West Region quarterfinals.

“I’m proud that our kids finished the game and didn’t quit,” said Jonathan Wilmoth, the Cardinal coach. “Mount Airy is a good football team and were beat all to pieces going into the game.”

The game began inauspiciously for the Bears, as a high shotgun snap from the East 35 was recovered by East’s Eric Adams at the 11-yard line.

But the Cardinals could not capitalize, as a run for no gain, delay of game penalty and three straight incomplete passes turned the ball back over to the Bears.

From their own 16, the Bears wasted no time in scoring, getting a 51-yard touchdown pass down the left sideline from sophomore southpaw Ian Gallimore to his favorite target this season, senior Zeb Stroup.

Walker Stroup’s extra-point kick made it 7-0 with 7:30 left in the opening quarter.

Coming into the game, Gallimore had completed nearly 70% of his passes and thrown for 20 touchdowns while being picked off only three times. Stroup had hauled in 14 of those balls for 472 yards (an average catch of 33.7 yards) and eight touchdowns.

East advanced into Mount Airy territory on the next possession but after a sack and caused fumble by Nic Isom, senior Reece Deaton made the recovery at the East 48-yard line.

Entering the contest, Deaton was the Bears’ leading defender, making 112 stops, just over 10 a game, with 25 of those going for losses. He had also recovered five fumbles and blocked a punt.

On fourth-and-3 from the East 13, sophomore leading rusher Tyler Mason took a handoff and swept right into the end zone. Walker Stroup’s PAT made it 14-0 with 4:21 left in the first.

Mason eclipsed the 1,000-yard rushing mark during the game and now has 1,078 yards on the ground and 20 touchdowns this season.

After Walker Stroup’s interception on the next series, the Bears took over at the Cardinal 26. From there, Gallimore hooked up again with Zeb Stroup with 3:25 remaining in the opening period. The conversion run failed, leaving the score 20-0.

Following a Cardinal punt, the Bears had only 24 yards between them and the game’s fourth score. On fourth-and-2 from the 16, Gallimore kept it and rolled left into the end zone. Walker Stroup’s PAT made it 27-0 with 11:12 left in the second.

Another East punt was downed at the Bear 45. Mason then worked his way right from 15 yards out into the end zone, getting a big block from fullback Joshua Ja’quez Penn. The PAT added to the 34-0 East deficit at 5:44 before halftime.

Following another Cardinal punt, the Bears marched 43 yards for another score, capped by Mason’s 9-yard saunter left into paydirt. The PAT completed the first-half scoring at 2:05 before the break.

The Cardinals rushed for only 1 yard in the first half and managed only 38 total yards before the break and another 51 in the second half. The Bears finished with 376 total yards for the game.

After a scoreless third quarter, Mount Airy brought on the running clock with the final score of the game. Sophomore Caleb Reid rushed for a 5-yard touchdown and Walker Stroup added the PAT with 7:15 to play.

“We just have to build off those kids that played this season and get our health back next season,” Wilmoth added. “Hopefully we’ll have a good mix (of experience and few injuries) going into the 2022 season.”

Following Mount Airy’s ninth shutout of the season, the Cardinals have lost six in a row to the Bears and have been outscored 198-6 in the last four contests.

A few clouds from time to time. High 49F. Winds light and variable.

Having an attitude of gratitude

What is cause of increase in violence?

Lack of trust a foundational factor

Thanks for saving magnificent oak tree