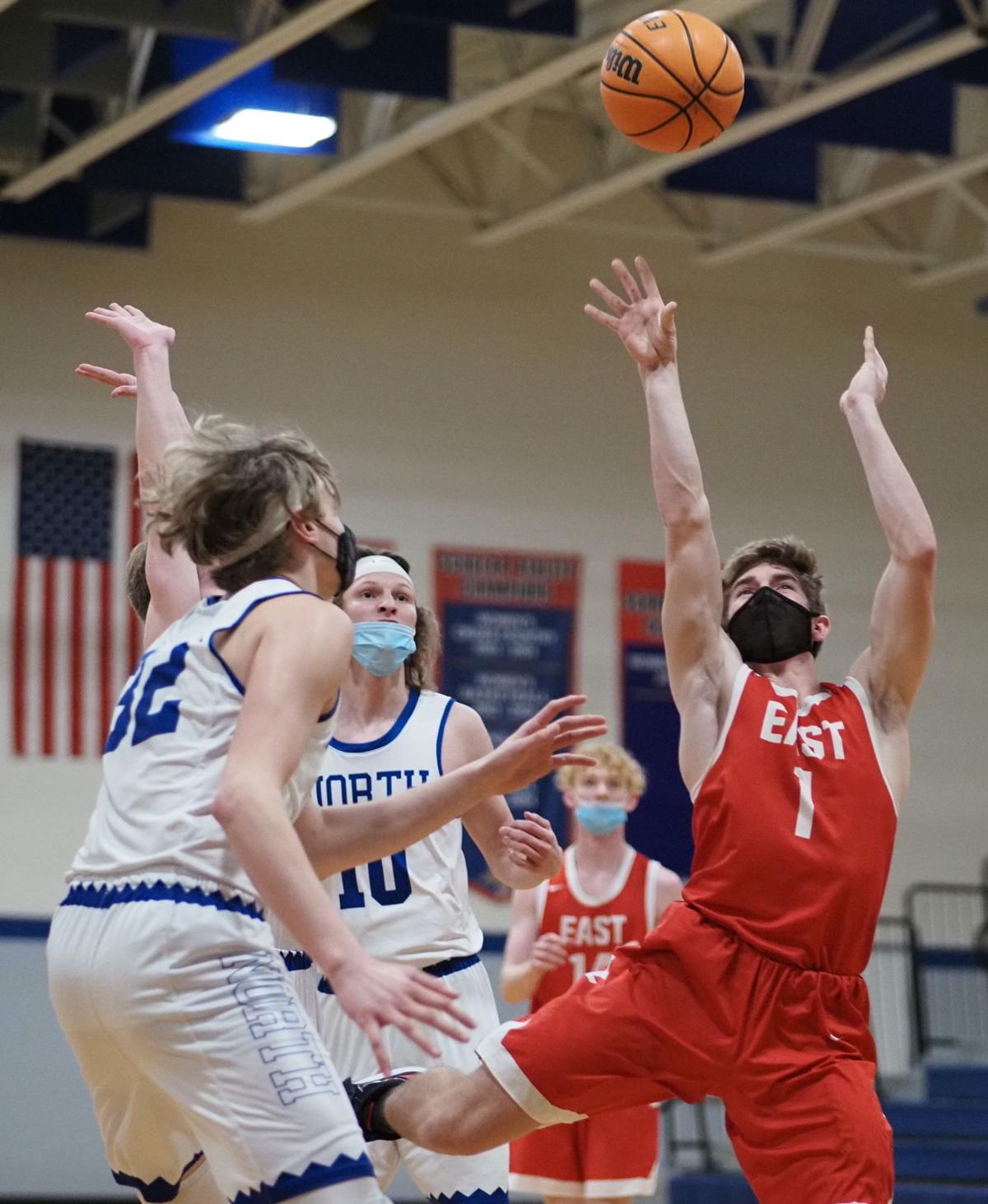 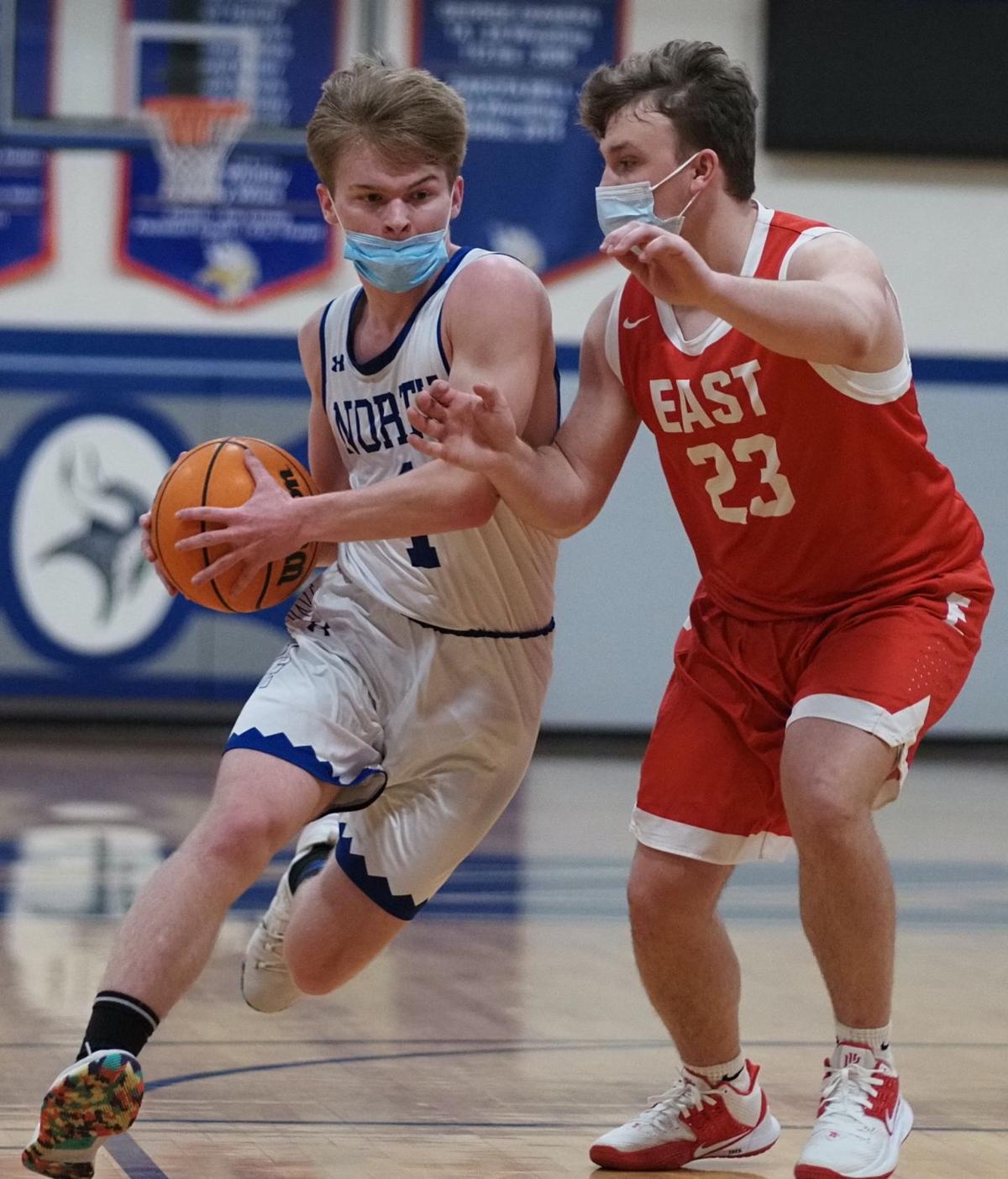 North senior Trystan Walker drives toward the basket in Hays as East senior Tate Samples keeps step during the Cardinals’ 61-53 win on Wednesday. 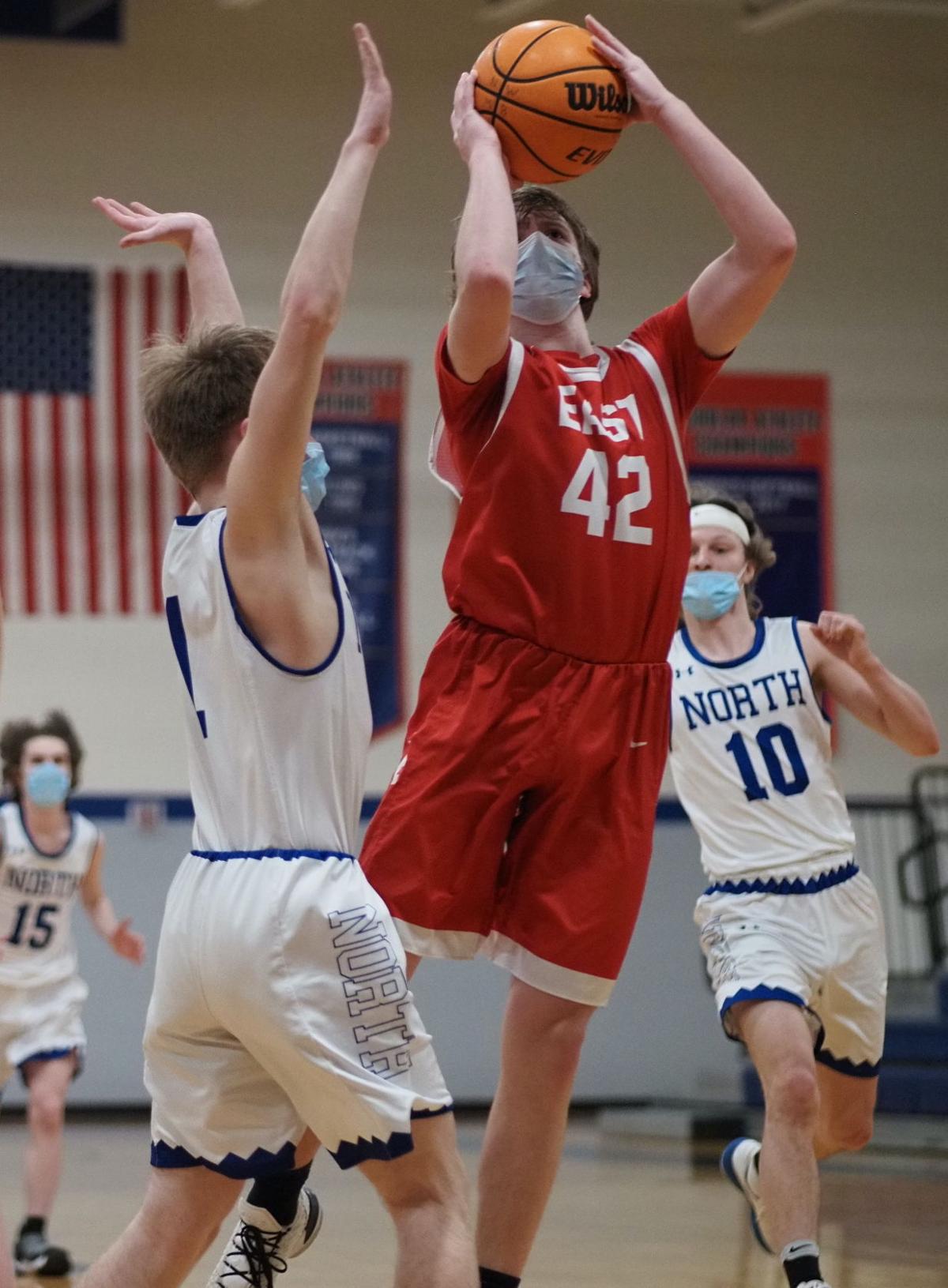 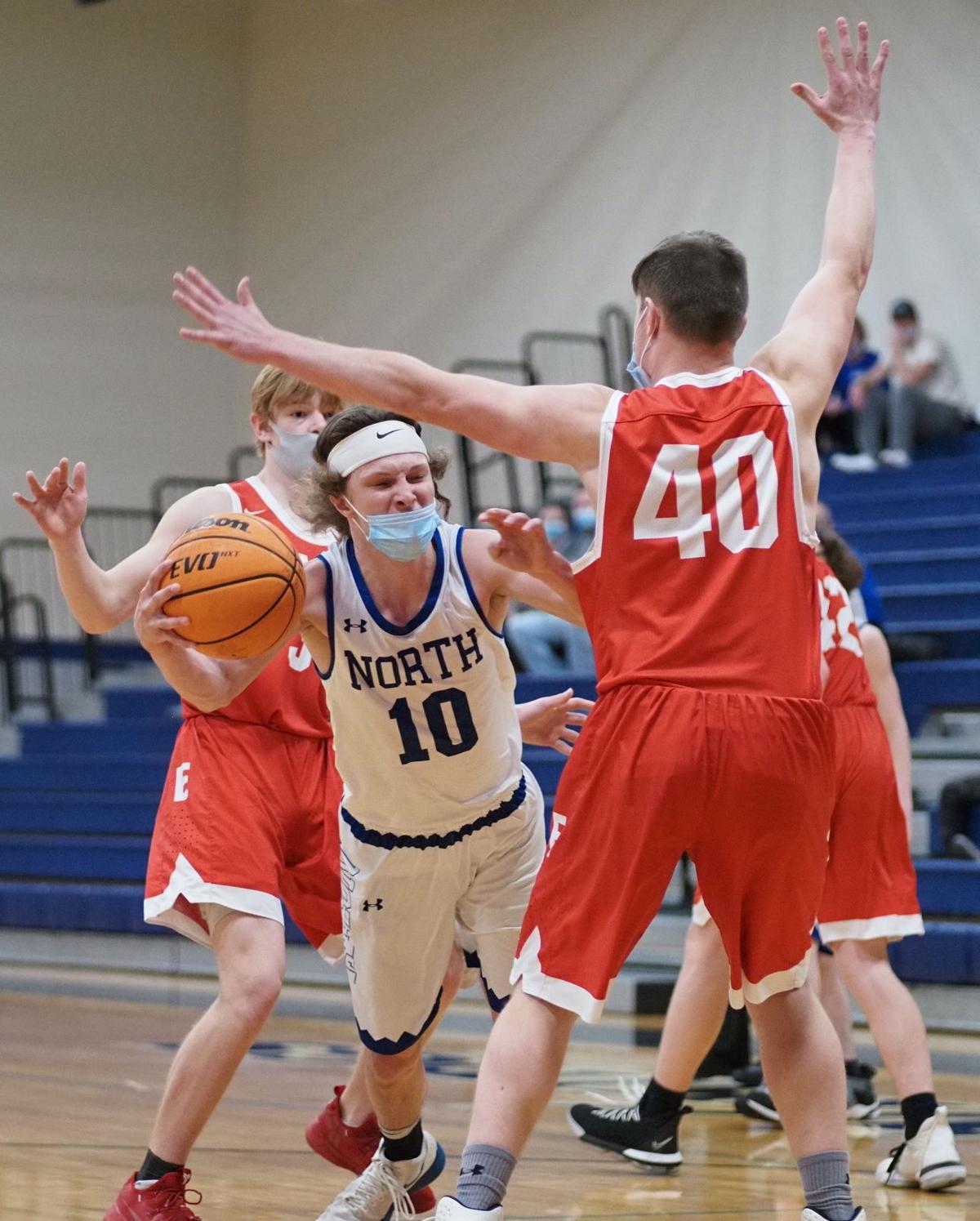 North’s Colby Brown, who led the Vikings with 15 points, finds his path to the basket cut off by Bryson Sidden (3) and Brayson Church (40) in Hays on Wednesday. 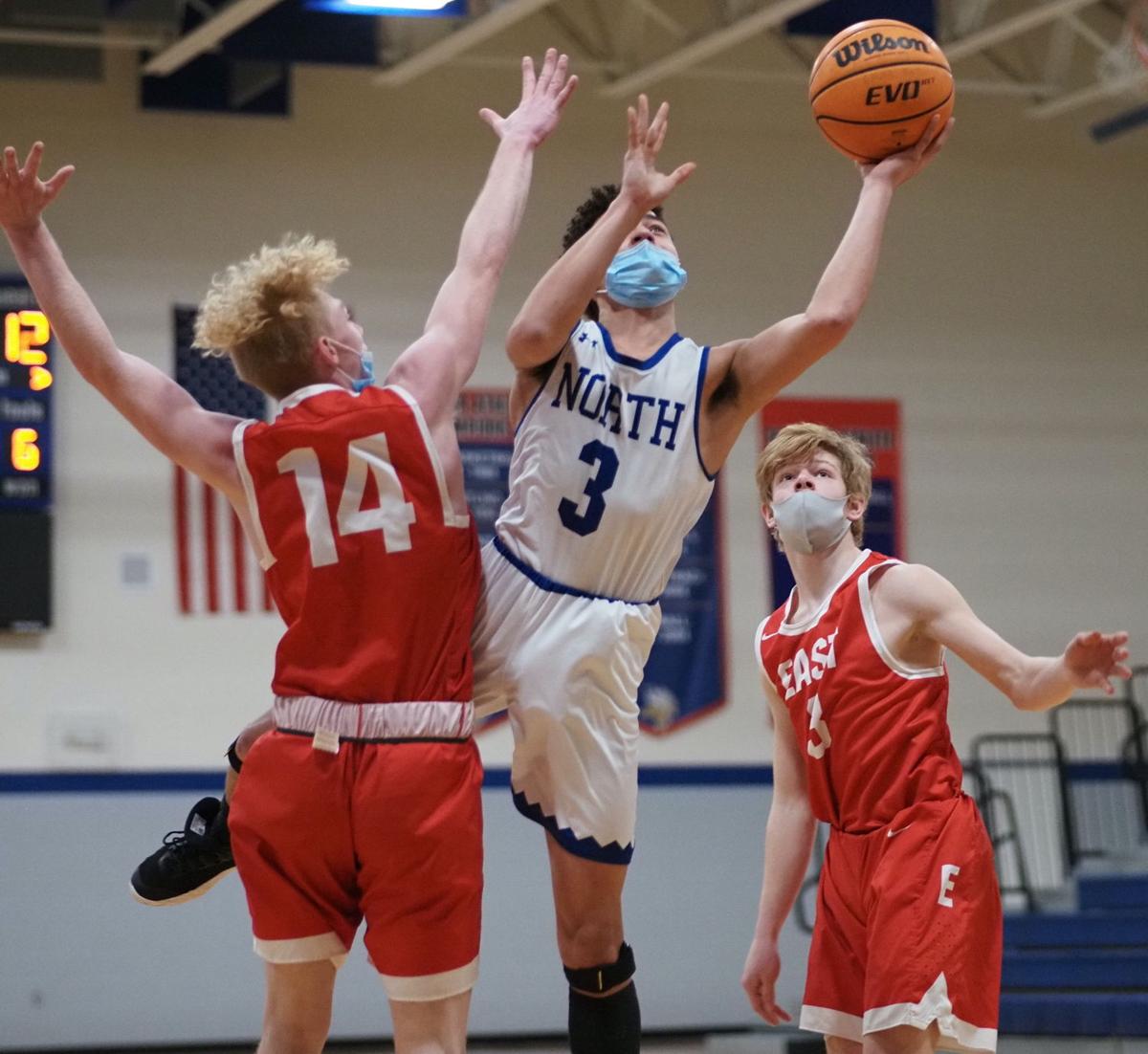 North senior Trystan Walker drives toward the basket in Hays as East senior Tate Samples keeps step during the Cardinals’ 61-53 win on Wednesday.

North’s Colby Brown, who led the Vikings with 15 points, finds his path to the basket cut off by Bryson Sidden (3) and Brayson Church (40) in Hays on Wednesday.

The East Wilkes varsity boys, playing in endurance mode, had something left in the tank for North Wilkes on Wednesday, in the season finale for both clubs.

The Cardinals, competing their third game in as many days, defeated their cross-county rival in Hays, 61-53, and halted the Vikings’ six-game winning streak.

With the road victory, East finished 7-7 and in a fourth-place tie with Elkin in the Mountain Valley 1A/2A Athletic Conference. North ended the year at 8-6 and in third place.

A jump shot and two free throws by Ledger Blackburn opened the scoring, but North’s Zack Carlton answered with a 3-pointer from the top of the key with six minutes left in the first quarter.

Blackburn canned a trey off a feed from Braxton Long for an 11-5 Cardinal lead with 1:45 remaining in the first. “Ledger had his most consistent game of the year,” said Rousseau of his sophomore center who led all scorers with 17 points. “He shot well inside and outside and was a matchup issue for North.”

Long, en route to 13 points, drained a trifecta from the top of the key just before the first period buzzer, spotting East a 15-8 lead. “Braxton hit big shots all night—I was very happy with his performance,” said Rousseau.

The East lead blossomed to 19-9 after Long connected again from beyond the top of the key arc a minute into the second quarter. But North stayed within striking distance, trailing 20-15 at the break.

East senior Tate Samples drained a 3-pointer from the right wing a minute into the second half, making it 23-16, and Dylan Ward made a long two from the top of the key for a 28-20 lead.

North then started exerting full-court pressure, which led to a steal and layup by Tristan Walker and then Carlton feeding Reese Cleary for a short layin and only a three-point Cardinal lead with three minutes left in the third.

The comeback continued, as Carlton—a senior guard who finished with 13 points—tacked on a short basket and free throw to spot the Vikings a 35-34 lead going into the final period.

Blackburn fed Ward for a layin on East’s first possession of the fourth quarter and then fed Samples for another layup and a 40-37 lead, prompting a Viking timeout with 5:41 left in the game.

“I was especially proud of the boys against a team as good as North Wilkes, as they made runs and applied pressure and altered what we were trying to do,” said Rousseau. “The boys found openings in their press and extended our lead back up to what it was earlier.”

Ward, who had 12 points, dished to Long for a key 3-pointer from the left corner and a 45-37 lead with 3:55 remaining. “Dylan continued his consistent play all year by getting to the basket and breaking the press,” noted Rousseau.

North’s Colby Brown canned a trey with 3:10 left, cutting the East lead to 47-41. Brown had all of his team-high 15 points in the second half.

But North would get no closer than five points the rest of the way, as East made 14-of-19 free throws in the fourth period.

“I was very happy that, at the end of the game, I had my seniors out there in a pressure situation and they made clutch plays,” said Rousseau. “My four seniors (Ward, Samples, Bryson Sidden and Jacob Spriggs) did what they needed to close out a tough game and situation.”

Rousseau said that his club played only five games with a full roster. “I was very happy given the fact we had to overcome a lot of adversity. I was proud of way the guys battled all year. It was one of the better years we’ve had in a while.”

He concluded, “We relied on our senior class for leadership and ability. We had five sophomores in the rotation, so we’re thankful to the seniors for their contributions but we’re also very excited about the future here at East.”

In the season finale for both clubs, host Elkin handed Wilkes Central a 59-52 setback on Friday.

The Eagles finished the season at 6-8, good for sixth place in the MVAC. Central missed the 2A state playoffs for the first time since the 2015-16 season.

“We were up and down all year but I am proud of our players, parents and coaches for their resiliency through what was a different kind of season with many challenges, due to pandemic,” said Matt Hagaman, Central’s coach. “Our players certainly had to go through a lot just to get to play but they should be proud of the fact that they stuck it out and made it happen.”

Hagaman said the program will miss seniors Jonah Brooks, Zach Mastin, Brian Hartley and Bryce Smithey. “We appreciate all of the time and effort that they gave to our program. We will have a lot of players returning next year and the future looks bright for Eagle basketball.”

Elkin completed the campaign at 7-7, in a fourth-place tie with East Wilkes.

Ashe County turned back West Wilkes in West Jefferson on Feb. 17, 63-40. The Blackhawks got as close as 38-35 to the hosts in the third quarter but were outscored 25-5 the rest of the game.

Ashe finished 10-3 in the MVAC and captured the program’s first league title since 2011-12 and the league’s lone 2A playoff berth. West’s season ended at 3-10, good for eighth place in the MVAC.

Elkin returned a day-old favor to East Wilkes at home on Feb. 16.

The host Buckin’ Elks eliminated the Cardinals from playoff contention with a 51-49 victory. Both teams’ records stood at 6-7 after the game.

In Elkin, East trailed 49-46 with 50 seconds remaining. Off an inbounds pass, Dylan Ward drove the right baseline and banked in a short shot while being fouled. He completed the three-point play to knot the score at 49-all.

Elkin’s McKendal Renegar then hit a long 2-pointer—with his foot on the 3-point line—from the right wing with 12 seconds left.

On East’s final possession, Ward dribbled up court and delivered a bounce pass to Mikey Darnell in the lane. Darnell’s shot was blocked from behind and gathered by Ledger Blackburn, who missed a short bank shot with two seconds remaining.

Elkin’s Cole Longworth corralled the rebound and was fouled by Blackburn with 0.8 seconds left. Elkin secured the inbounds pass to end the game.

Alleghany took control in the middle quarters of a 53-49 win at West Wilkes on Feb. 16. The Trojans improved to 4-7 while the Blackhawks faltered to 3-9. West senior guard Dawson Martin, inserted into the game with 11 seconds left in his final home game, hit a buzzer-beating 3-pointer from the left wing to complete the scoring.

The Vikings snapped the Rams’ five-game win streak and improved to 8-5, the same record as Starmount.

“I was as proud as I have ever been of our team in the win against Starmount,” said Logan Call, the North coach. “Starmount is a good team and a very difficult place to win. Our guys knew they were playing in a game that could have conference championship implications and they played with a belief that they would win.”

Call said his team executed well offensively early and raced out to a 16-2 lead in the first quarter. The Vikings led 26-13 at the break.

The Rams outscored the visitors 19-5 in the third period and took the lead. “We really struggled in the third and turned the ball over. But our guys never got rattled and executed down the stretch to gain and extend the lead.”

Zack Carlton, who led North with 32 points, seven rebounds and three steals, was “unbelievable,” according to Call. “He dominated early in the game with his shooting, making five 3s in the first half. He also took the game over late in the fourth with five different baskets in the quarter, attacking the rim or offensive rebounding.”

Carlton, a senior guard, has “really taken a step forward in the last few weeks and is a huge reason for our success,” said Call. “We defended as a team and we were much better on the defensive glass than we were the first game against Starmount.”

The Huskies bettered to 9-3 and clinched first place in the MVAC, a year after finishing fifth in the league. It’s Ashe’s first league title since the 2011-12 season.

With 13.2 seconds left to play, Central’s Spencer Leatherman had a chance to tie the score at 60-all but missed the second of two free throws. Ashe’s Dawson Cox rebounded and was fouled by Jonah Brooks. Cox missed the front end of the 1-and-1 but corralled his own miss and was fouled again with 9.6 ticks left.

After Cox made both foul shots, Leatherman misfired on a 3-pointer. Brooks rebounded and made the follow at the buzzer but could not draw a foul on the play.

Leatherman led a balanced Eagle attack with 15 points. Brooks added 14 points while Zach Mastin and Anthony Graham each had 13.

The Eagles fell to 6-7 and will end their season Thursday at Elkin.

A few clouds from time to time. Slight chance of a rain shower. Low near 45F. Winds light and variable.