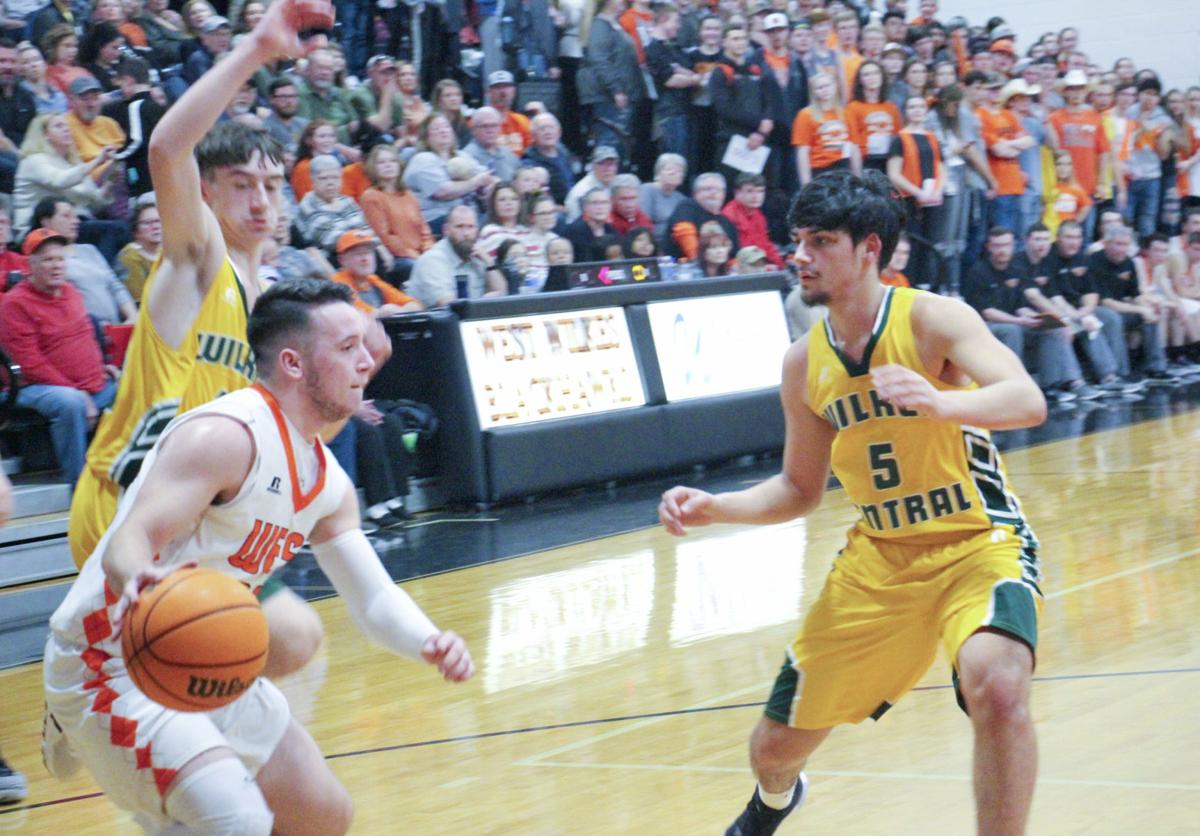 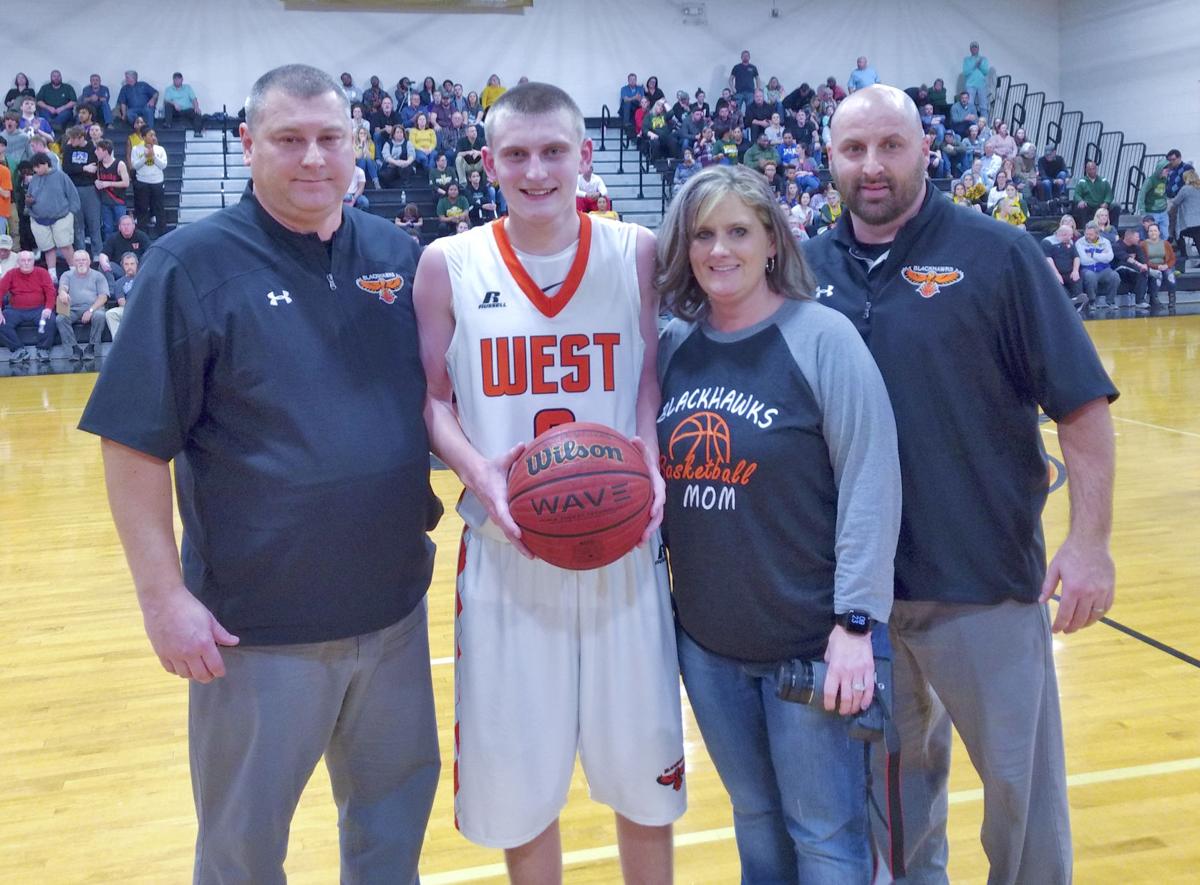 JACOB BROWN, of West Wilkes, scored his 1,000th career point in the third quarter of Tuesday’s game. In the photo with Brown are his parents, Dale and Kristie Brown, along with West Wilkes Head Coach Scottie Greene. 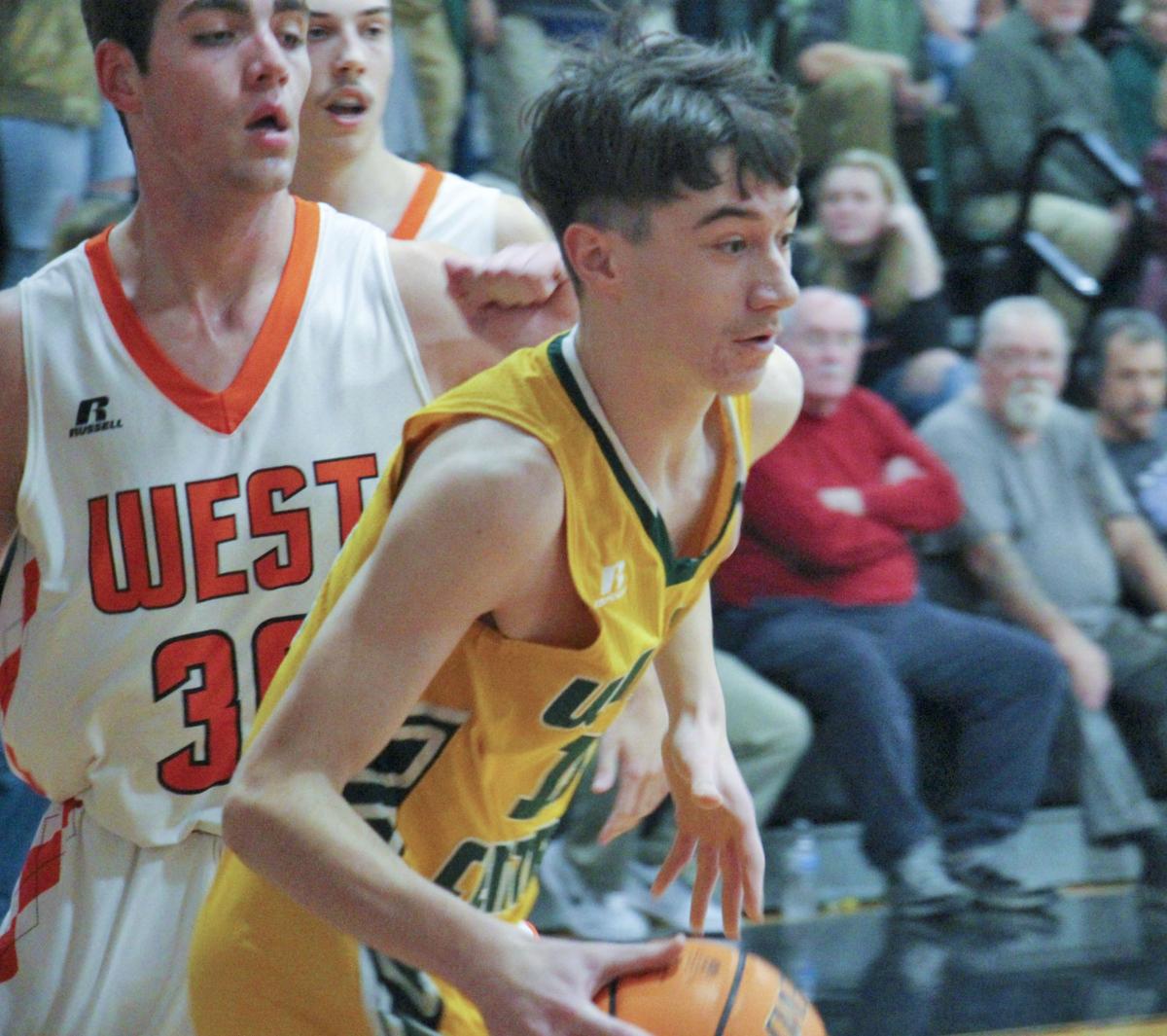 Zach Mastin, seen here driving past West Wilkes' Jackson Stinson in the first half, led Wilkes Central with 20 points during Tuesday night's win. Stinson chipped in 13 for the Blackhawks. 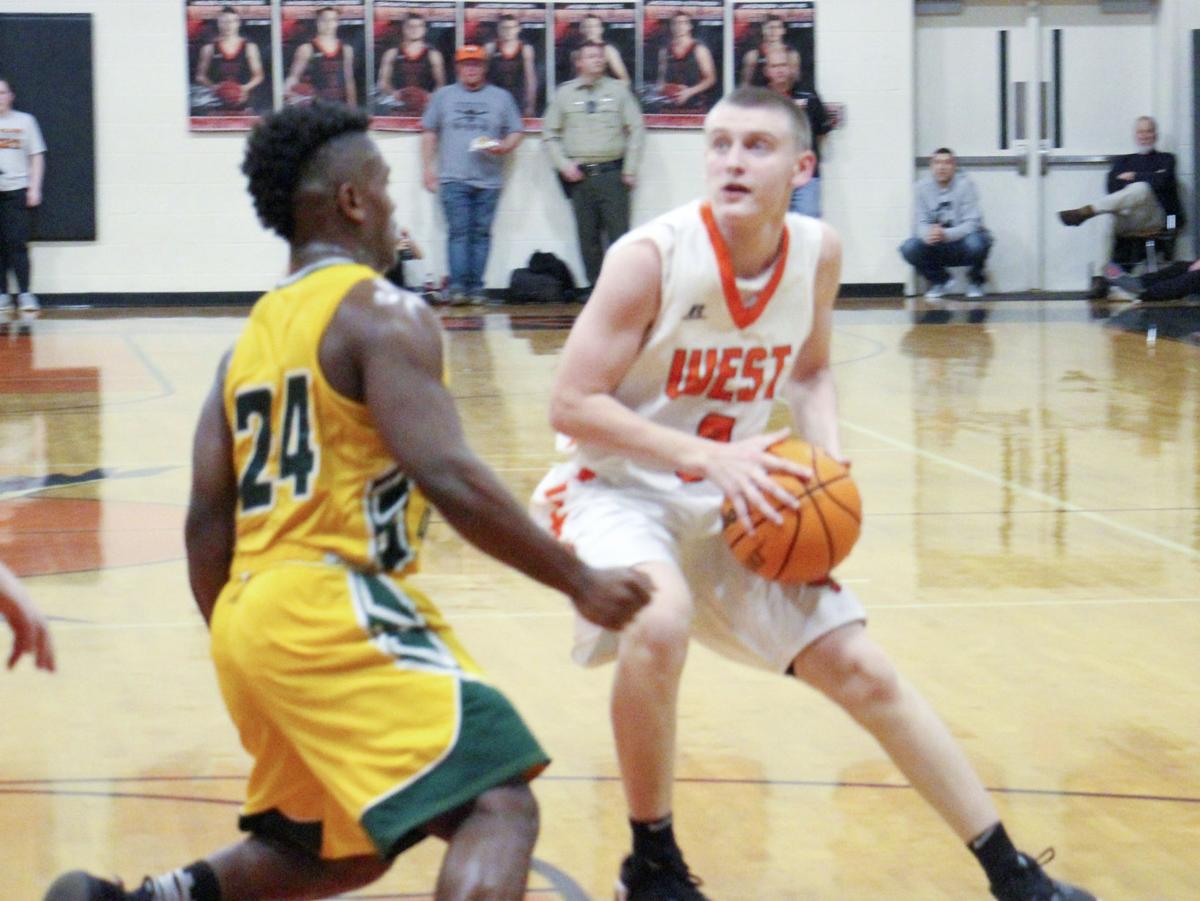 Jacob Brown, who eclipsed the 1,000-point plateau for West Wilkes in the third quarter, looks to dribble past Wilkes Central's JoRaye Morrison in the first half. Brown finished with a game-high 21 points

JACOB BROWN, of West Wilkes, scored his 1,000th career point in the third quarter of Tuesday’s game. In the photo with Brown are his parents, Dale and Kristie Brown, along with West Wilkes Head Coach Scottie Greene.

Zach Mastin, seen here driving past West Wilkes' Jackson Stinson in the first half, led Wilkes Central with 20 points during Tuesday night's win. Stinson chipped in 13 for the Blackhawks.

Jacob Brown, who eclipsed the 1,000-point plateau for West Wilkes in the third quarter, looks to dribble past Wilkes Central's JoRaye Morrison in the first half. Brown finished with a game-high 21 points

And the final outcome of Wilkes Central’s 58-57 win over West Wilkes would not be firmly decided until Jacob Brown hit a basket from just inside the half court line as time expired.

Brown’s basket came after a pair of free throws from Central’s Marcus Lopez with less than four seconds to play. The Eagles, who avenged a 51-45 defeat back on Jan. 3, were 13-for-17 from the charity stripe in the fourth quarter but only 18-of-30 for the game.

“It was a very gutsy performance from our guys who just kept working the whole night and it took every second against a good team,” said Wilkes Central Head Coach Matt Hagaman. “I’m tickled to death with the win, grateful for the opportunity to keep playing for big stuff and we’re going to do our very best to keep it going.”

Lopez finished with 16 points but it was a key assist that gave Central the lead, for good, with 2:05 to play.

After tying the game with a 3-pointer and 1-of-2 from the free-throw line, the senior started a fast break and looked like he was going to attempt a layup against a Blackhawk double team. But at the last minute, Lopez found an open JoRaye Morrison, who converted the layup to put the Eagles up 48-46.

Zach Mastin, was a perfect 8-for-8 from the charity stripe in the fourth, hit a pair of free throws to go up seven (53-46) with 50 seconds to play.

“It was stuff like that helped make the difference. We made some great decisions down the stretch with the ball, got to the free-throw line, which was certainly a goal,” said Hagaman about Lopez’s heads up play. “I wish we could have made a little more and grew the lead some but when it really mattered down the stretch, we made them and none bigger than the last two by Marcus that puts us up four and puts the game on ice.”

Things didn’t look too promising for the Eagles (10-7, 8-2) early on as West Wilkes stormed out to an early 7-0 lead after a hook shot from Jackson Stinson.

The Blackhawks (12-6, 8-2) pushed the lead to 19-6 after one following a Mason Childress basket off a Dylan Miller steal.

Complicating matters for Central was the departure of starter Daylon Banks, who left less than four minutes into the game with an injury. The senior did not return and his status going forward is not known.

“It’s unfortunate, but that’s sports and that happens. Daylon’s a tough young man and so he’ll bounce back,” said Hagaman. “But others had to step up and they did and played some big time minutes in some big time roles.”

The Eagles, who moved into a second-place tie in the Mountain Valley Athletic Conference with their sixth-straight win, used an 11-2 second quarter run to cut the Blackhawks’ lead to 25-23 at halftime.

After a deep two from Stinson right out of the break, a fade away from Jakob Gowan, sparked a 10-2 Central run.

Another major highlight from the third quarter was when Jacob Brown connected on a pull-up jumper with less than 30 seconds to play in the quarter for his 1,000th point.

Jonah Brooks added 10 points for the Eagles, who will return to the court tonight at Alleghany. It’ll be the second meeting in a little more than a week after Central bested the Trojans 57-42 in a makeup game on Jan. 22.

Stinson and Miller added 13 and 10, respectively, for the Blackhawks, who travel to MVAC leader Starmount tonight.

After winning 10 in a row, the Blackhawks have dropped two straight and now trail the Rams by a game in the conference standings with four to play.

“We’ve got to come out and do what we do. We can’t take things for granted, we took one for granted Friday at Elkin, we didn’t play really well,” said Greene. “We played well here early but didn’t play well down the stretch. We’ve got to put four quarters together, we play a quarter here, a quarter there.”

The Eagles also captured the JV game 59-55 to improve to 9-1 in MVAC play (11-3 overall) behind double-digit scoring efforts from Spencer Leatherman (21 points) and Carlos Reyes-Martin (16 points).

Carson Stanley led the Blackhawks (12-5, 6-4) with a game-high 25 points on the strength of eight 3-pointers. Logan Wayne chipped in 11 points.

Cloudy with showers. High near 55F. Winds light and variable. Chance of rain 40%.

Partly cloudy skies during the evening will give way to cloudy skies overnight. Low 34F. Winds light and variable.

Partly cloudy skies during the evening will give way to cloudy skies overnight. Low around 30F. Winds light and variable.