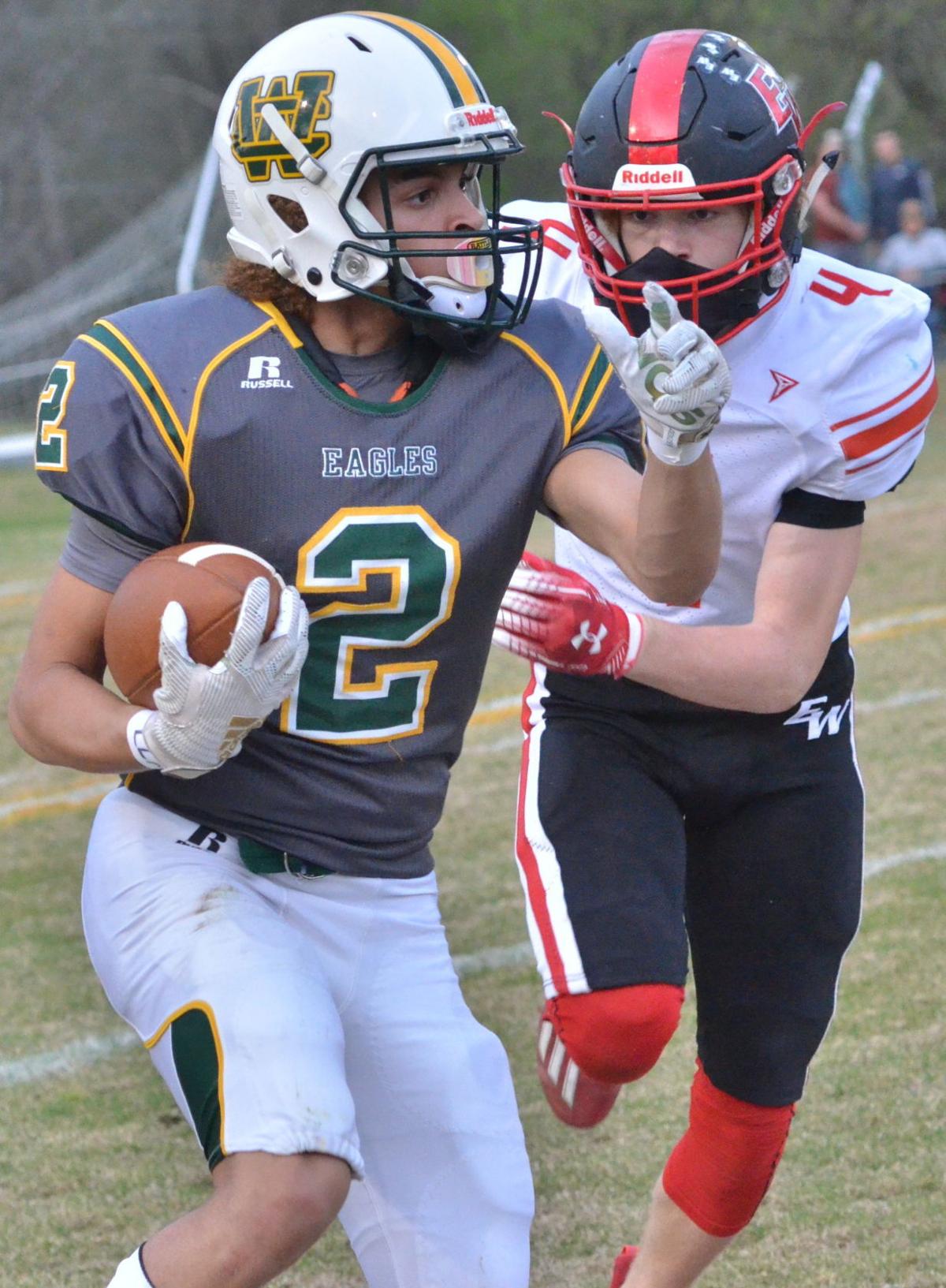 Carlos Reyes-Martin returns a kick for Wilkes Central while being pursued by East Wilkes’ Bryson Sidden. Reyes-Martin and the Eagles clipped the Cardinals in Moravian Falls on Friday, 32-19. 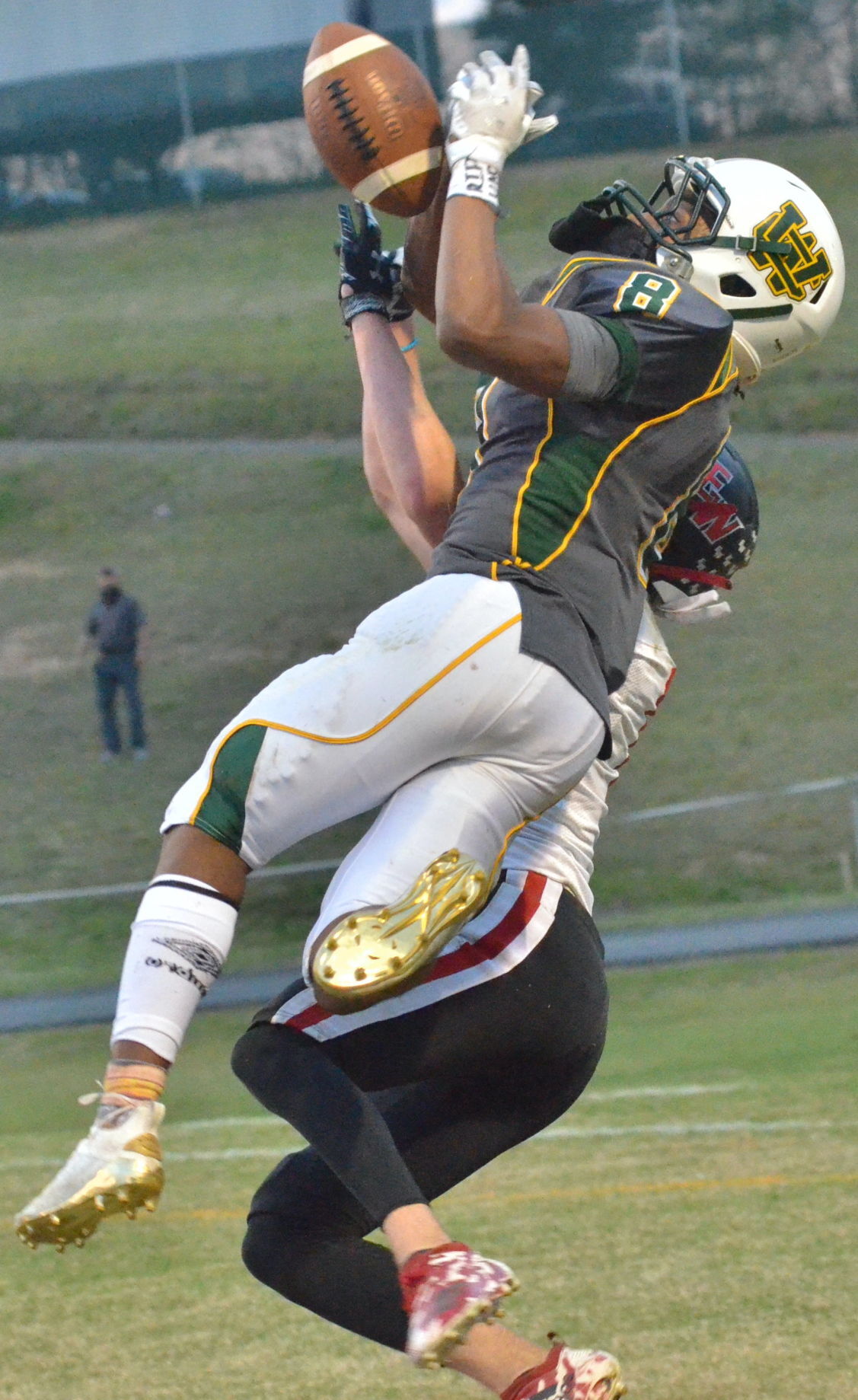 Anthony Graham of Wilkes Central can’t haul in a pass attempt while being defended by East Wilkes’ Titus Miller, who intercepted the pass, in Moravian Falls on Friday. The Eagles knocked off the Cardinals, 32-19, in the season finale for both clubs.

Carlos Reyes-Martin returns a kick for Wilkes Central while being pursued by East Wilkes’ Bryson Sidden. Reyes-Martin and the Eagles clipped the Cardinals in Moravian Falls on Friday, 32-19.

Anthony Graham of Wilkes Central can’t haul in a pass attempt while being defended by East Wilkes’ Titus Miller, who intercepted the pass, in Moravian Falls on Friday. The Eagles knocked off the Cardinals, 32-19, in the season finale for both clubs.

Those tears were for good reason. Hartley, and the other 11 Eagle seniors, played their final high school football game and certainly made the most of their curtain call.

“They were determined not to walk off this field for the last time with a loss,” said Wilkes Central head coach Ron Turner. “I feel bad for them because we’ve got a great core of senior kids who have done so much for our program, and are even better kids, but for the last three years, they haven’t been able to experience a conference championship.”

Turner added, “Injuries have just decimated us for three straight years. I told them that we don’t always understand God’s play sometimes, but he’s always got a reason.”

One of those seniors — JoRaye Morrison — was actually a part of the Eagles’ last Mountain Valley Athletic Conference championship as a freshman in 2017.

Morrison rushed for a game-high 298 yards and four touchdowns on 36 carries. He accounted for 30 of the Eagles’ 32 points on Friday and put the Eagles (5-2) up 13 with 4:23 to play on a 25-yard rushing touchdown. Anthony Graham added the two-point conversion on the ground.

While having a big night on the ground, Morrison didn’t want to take credit for the big night, deflecting it to the guys blocking up front for him.

“Jonah (Brooks), Kamen (Smith) and Brian are my backbone. Without them, I would be nothing. This was our last game and I wanted to make sure that we came out of here with a win,” said Morrison.

“It’s crazy that it’s over. It feels just like yesterday that I was in seventh grade and was watching (2016 Wilkes Central graduate) Andrew Bynum play; then freshman year, I’m on varsity, playing where he was — it’s an amazing feeling.”

After Morrison’s score, East Wilkes (2-5) looked to be in good shape to make it a one-possession game after quarterback Briggs Gentry found Titus Miller for a 13-yard gain to set up first-and-10 from the Eagle 31.

Central senior linebacker Ahmad Carlton then sacked Gentry for a 12-yard loss. After back-to-back incompletions from Gentry set up fourth-and-22 with 2:08 to play, the Cardinals benefited from a pass interference penalty from the Eagles but still were short of the first down.

Going for it on fourth-and-6 from the Central 29, Hartley sacked Gentry for an 11-yard loss, resulting in a turnover on downs with 2:08 to play.

The defensive stop turned out to be the final play of Hartley’s prep career.

The Cardinals, who had dropped back-to-back games to MVAC champion Ashe County (44-0) and Elkin (30-6), started strong when Gentry found Ethan Cass in stride for a 50-yard touchdown on their first play on offense.

“It’s always good to score on the first play and I think it was good for our kids,” said East Wilkes head coach Jonathan Wilmoth. “Briggs and Titus were really in tune, they made a couple of big plays and it’s good knowing you’ve got those two coming back next year. And the same can be said for Briggs and Ethan.”

Central, which defeated Allegheny and Starmount by a combined score of 88-14 the previous two games, responded behind the legs of Morrison with a 50-yard touchdown. He also tacked on the two-point conversion for the 8-6 advantage.

East had a chance to retake the lead after Miller hauled in a pair of 30-plus-yard receptions from Gentry to set up first-and-goal from the Eagles 3. But the Eagles defense stood tall, stopping Brody Martin short of the goal line to start the second quarter.

Miller, who finished with six catches for 142 yards, gave the Cardinals another opportunity to take the lead when he intercepted C.J. McGill’s pass attempt.

East struggled to gain any offensive production on the ensuing drive; on third-and-20 from the Cardinal 7-yard line, Morrison brought down Gentry in the end zone for a safety and a 10-6 advantage.

“When we didn’t score here at the goal line and then they got a safety, I thought that was the difference in the game,” said Wilmoth. “Our kids played their hearts out all year, we’ve battled but we just came up short in these games and we’ve just got to learn and grow from it and carry it into next season.”

Touchdown runs of 5 and 35 yards from Morrison pushed the advantage to 24-13 after three quarters before Gentry and Cass hooked up again — this time on a 3-yard touchdown pass to make it a one-possession game (24-19) with 9:38 to play.

In addition to the two touchdown strikes, Gentry added a 2-yard touchdown run in the second quarter. The sophomore signal caller finished with 306 yards on just 13 completions.

Notes: The Cardinals played Friday’s finale without the services of former all-MVAC performer Brayson Church, who was injured in the Cardinals’ game with the Buckin’ Elks the week prior. During Friday’s game, Wilkes Central players, coaches and support staff wore stickers with No. 58 on them (Eagle players wore them on their helmets) in recognition of Andre Wilson. A senior, Wilson suffered a season-ending ankle injury during the Eagles’ 22-14 loss at Elkin on March 12. While using crutches, Wilson went out to midfield before the game to participate in the coin toss as one of the team captains.

A few clouds. Low near 45F. Winds light and variable.